RETURN to part 1
The architecturally stunning twin city of Houghton-Hancock, Michigan is built on a slope like San Francisco, and a lift-bridge connects the two cities on both sides of the Portage Canal. It is densely populated with those thick, carved-stone buildings so common to the Lake Superior region. The most famous abandoned building in da Yoopee might be the Quincy Smelter, and it was situated prominently on the Hancock side in all of its rotting sandstone glory, though today it is being converted to a new use.

On the ridge of the steep hill behind the smelter were perched the remnants of the Quincy Mine itself, part of which was open for underground tours. I always thought about taking the actual tour, but for now I was preoccupied with the do-it-yourself kind of tour.

The Upper Peninsula ("da Yoopee") is one of the most mineral-rich and mineral-diverse parts of the U.S. Geologists have flocked here since copper was first discovered in the 1840s, which also marked the founding of Michigan Tech--originally a mining school, now one of America's top 50 universities, and still the top geology school as far as I know. The original Michigan School of Mines building can be seen here abandoned at left (though lately it too has been fixed up):

I made my way to the Quincy Smelter and realized that it was fenced off, and adjoined a junkyard. I drove into the junkyard, found nobody around, and basically parked in the middle of it. I got out and began snapping photos of old buildings that looked like they might've been part of the smelter operation.

The junkyard currently encompassed quite a large area, and a snowmobile trail passed through it over a former railroad right-of-way as well.

I found a large washed-out piece of ground that left a huge gap under the fence surrounding the main buildings, and figured that was an open invitation.

According to Lawrence J. Molloy's Guide to Michigan's Historic Keweenaw Copper District, the Quincy Smelter lit its furnaces in 1898, and operated them until 1967. The Quincy Mining Co. not only smelted ore from their own mines, but also contracted out to many other smaller mines in the region who could not afford to build their own large-scale smelters, netting them fantastic profits.

I explored the plentiful ruins of the Quincy Mine up on the hill in a different post.

After the Quincy Mines dried up, they began smelting recovered tailings from their reclamation plant near the Quincy Stamp Mills on Torch Lake. After that, the smelter kept in operation by smelting scrap copper until 1971. The Quincy Smelter itself is built atop the stamp sands of the old Pewabic Stamp Mill, and at the moment it is the last remaining copper smelting works left intact in America.

This is the casting plant:

I'll keep my ramblings on this place short however, because Mike over at Copper Country Explorer has done an infinitely more in-depth analysis of the Quincy Smelter than I could hope to, and I highly encourage you to check out his work.

The mineral house, where railcars brought stamped ore to be smelted:

This whole scene today was like something out of an old western movie...for a first trip up into the Keweenaw Peninsula, I was enjoying the hell out of this. The ancient wooden buildings were so weathered and rotten that they slumped like soggy shredded-wheat. The smelter's shambled stone hulks had an unsettling foreign look to them. They were so old, and built from such unique stone that they were totally unlike anything I had explored before, and yet such an important landmark in the fabric of Copper Country life.

The dilapidated Quincy Smelter is the quintessential reminder of the Yoopee's former glory, and a poignant symbol of the insurmountable loss associated with the sudden collapse of its industry. Like the logging companies, the mines were all mostly owned by out-state interests, and very little of the money stayed here. When the copper dried up, they pulled up stakes and all that was left behind was a bunch of poor, dirty miners living in shanties--most of whom didn't stick around long in this polluted hellhole. Many went out west to continue mining, or went south to Detroit to build cars, and the copper villages of the Keweenaw became a string of ghost towns from here to Fort Wilkins.

Though the Quincy's reverberatory furnace and cupola building date to the original 1898 construction, the other buildings here range in vintage all the way up to 1920.

This is the conveyor of the Walker Casting Machine, where finished ingots of copper would be dipped in a cooling bath:

The array of old implementia left behind in this structure was mind-boggling...I could've spent hours in here.

I explored the buildings thoroughly and found everything within to be basically left as it was the day operations ceased. I was ecstatic to be finding some nice artifacts in here as opposed to the usual empty shell...

...lots of tools were strewn about, such as the giant hand-forged ladles that were used to skim impurities from the reverberatory furnace, and these skips (ore carts).

Next, I went into the furnace building.

Keep in mind I had limited battery power remaining by this point, so I didn't get as many shots as I wanted. I also had no tripod, so I was forced to forgo a lot of shots in dark areas.

Inside the furnace building:

The next photo on the right is part of the Combo Furnace, and on the left is the base of the Cook Vertical Boiler:

Out back was an old Northern Pacific RR locomotive. I felt like I had stepped into the 1890s...everything was antique, no matter where I looked, and smacked of Steam Age technology and Gilded Age craftsmanship. It's worth noting that the Keweenaw is essentially the beginning of the Wild West; it was in its heyday during the same time period as the "Cowboy Era," and stood at the cusp of the western frontier, one of the last outposts before un-organized territory began.

Not a thing was out of place...I expected some filthy prospector to come ambling around a corner wearing hand-tailored overalls and carrying a pickaxe over his shoulder with a whale-oil lamp on his head, barking at me to support the strike or "Remember the Maine."

It's not very often you find steam locomotives just sitting around abandoned anymore...

It was right about this point that I heard someone approaching in a vehicle, tires slowly crackling over the gravelly mill tailings outside the fence.  I decided that despite the fact that a major ORV trail passed immediately next to the smelter, it might be best to duck out of sight inside the locomotive's cabin until whoever it was passed.

As I would later find out the person in the vehicle was the junkyard owner, who was in fact looking for me.

I admit that I scarcely got enough pictures of this strange paradise of antiquity, but again, I was so overwhelmed by the myriad photos that jumped out at me that I think I missed most of them.  The touch of golden setting sunlight was an added magic spell.

In fact, going back through these old pictures again has refreshed some nearly-forgotten pleasant memories. Back inside the boiler house, here was the ornate front of the Cook Vertical Boiler:

Across the top it was blazoned with the words "QUINCY SMELTING WORKS":

It was hard to get a photo with the glare coming from directly behind...

Nearby was the engine room, with two Corliss steam engines to drive the generators:

This engine was installed with the building, in 1898:

I even made my way to the roof, for whatever reason, despite the increasing diceyness of the building's stability...

The modern shed-type building on the waterfront is the Isle Royale National Park headquarters, where the ferry Ranger III leaves from:

Sadly, I needed to continue my northward voyage, so I finished up and went back to my car. I had hoped to reach Copper Harbor by nightfall. But as I came within sight of my vehicle, I was suddenly startled by the sight of the rear-end of a another car that said STATE POLICE across the trunk lid...it was parked behind my car, blocking me in.

I stayed out of sight, and debated what I could do. Realizing I could not escape, and that I was really guilty of no crime now that I was on this side of the fence, I opted to approach the officer. I just hoped he didn't ask to see my photos, but I figured I could bluff my way out of this.

He zoomed right up to me, but I happily cooperated and showed him ID. As I suspected, he was called because I had parked in such a suspicious spot. I guess the junkyard owner spotted my car from his house all the way on the other side of the road and thought I was ripping him off (scrap metal prices were at an all-time high in 2006, if you recall).

I explained that no, I was just taking pictures of the buildings, etc., and the trooper gave the usual spiel about danger, etc. Both men were the typical super-friendly Yoopers, and the junkyard owner actually turned out to be on the committee to save the Quincy Smelter. Up to that point I had no idea that there was such an effort underway on its behalf, and that made me very happy to hear.  I certainly had noticed however the unmistakeable lack of vandalism to the site.

Of course by now you probably know that the Quincy Smelter Association has taken great strides since then in restoring and reopening the old site to the public as a historical attraction, even offering tours. I would have stayed and chatted longer on that topic, but I didn't want to risk them getting any more curious about me, so when they allowed me to split scot-free, I did so. In 2010, I made a return trip to the smelter with my buddy DopeNess: 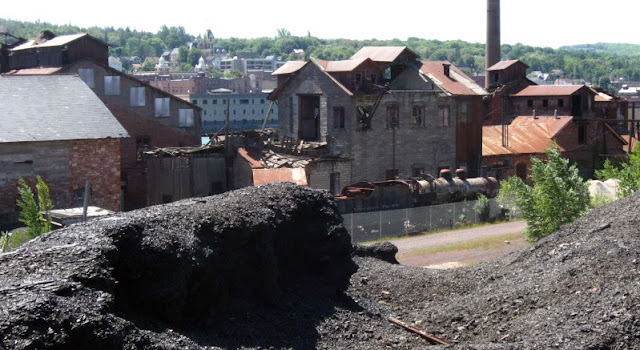 This time we played around on the slag pile out back, which I'd never checked out before. It was like being on the surface of Venus, everything molten and broken up. 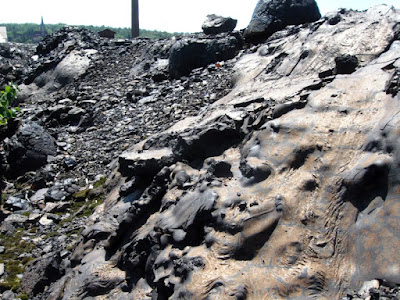 Who wouldn't want to climb all over a 100-year-old pile of industrial waste?! 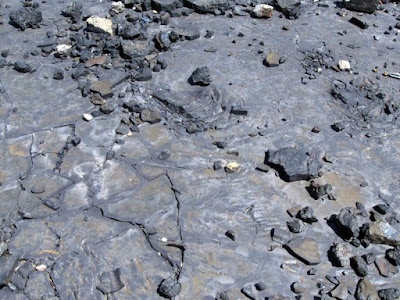 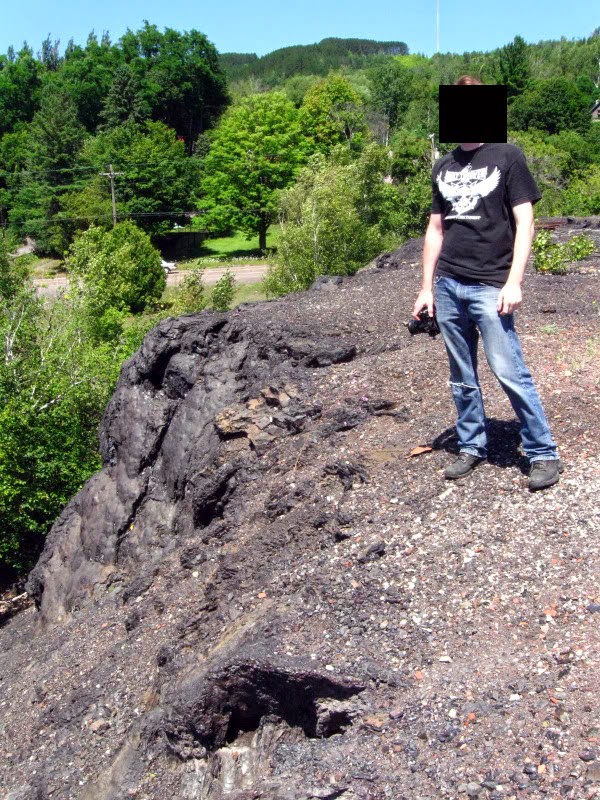 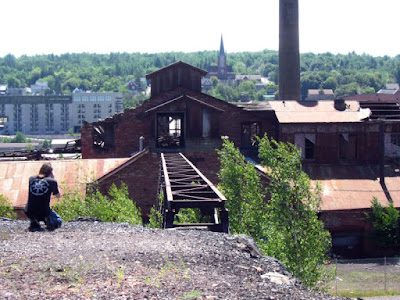 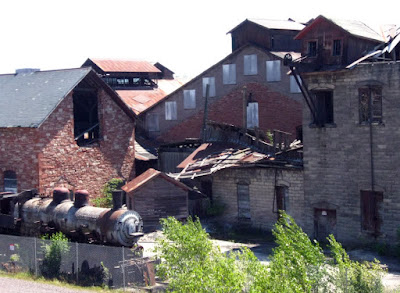 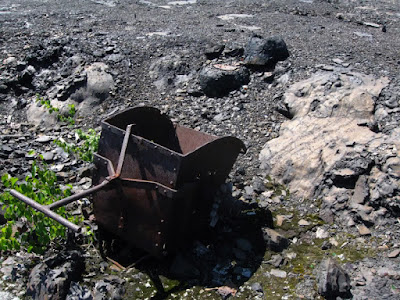 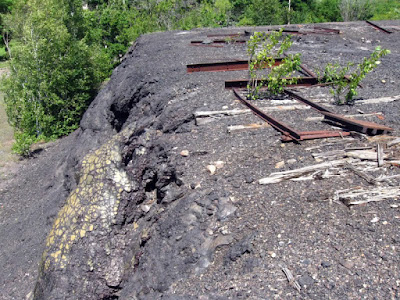