I decided to use a long Labor Day weekend to my advantage: with the extra day off it meant I could probably make it not only to the Yoopee, I could also make my first trip into the wild and far-flung Keweenaw Peninsula, the northernmost part of Michigan, which juts up into Lake Superior. Due to its geography it is one of the most remote and unpopulated land masses in the lower 48 states. It is also one of the most beautiful, unspoiled places in the country, with its rugged mountainous landscape, jagged rocky shoreline, and dark endless forests. There is on average less than one inhabitant per square mile. US-41, the biggest highway in the entire Keweenaw Peninsula, is only twice as wide as my driveway in most spots. There is also a plethora of old ruins left over from the copper mining days that I could check out.

On my way I stopped in Marquette, because I love that town, and I wanted to check out a few things. Unfortunately, the old Morgan Heights Sanatorium was no more, so I missed out on that one.

I had read that there was once a tunnel leading to the Marquette Lower Harbor Breakwater Light. Instead of using the usual elevated catwalk, the engineers decided to make a tunnel to access that lighthouse. The breakwall had since been extended out further and the light removed, but the tunnel supposedly remained.

Over by the Coast Guard station I noticed that indeed there used to be a door leading into the side of what definitely looked like a tunnel, but it was *no longer accessible,* to put it mildly:

So I walked out there on top of the wall, taking in the fresh lake air and the view of the city across the harbor. According to the Great Lakes Lighthouses Encyclopedia, the original 1860s-era beacon was accessed by a catwalk, but both had been washed away by a terrible storm in 1886. The Marquette Lower Harbor Breakwater Light and its tunnel were built in 1890 to replace it.

The Detroit Lighthouse Office decided in 1898 that since there was now electricity in Marquette, they were going to run a cable out to the new breakwater light. The tunnel was what helped facilitate this move, and on July 17 of that year the Marquette Lower Harbor Breakwater Light became "perhaps the first light on the Great Lakes to be electrified."  Unfortunately the hydroelectric service that was powering the city of Marquette back then was still unreliable at times, and the lightkeeper from the nearby Marquette Harbor Light occasionally had to walk out there with a kerosene lamp and relight it the old way.

Every so often were these little 3-inch ports, through which I could see that there was indeed a tunnel inside the breakwater:

Halfway out, I looked down into the water and saw a way in...if you're a diver:

I had just about reached the end of the tunnel, where the c.1890 breakwater light would have been, to find modern equipment in its place:

The large ore dock that dominates the skyline of Marquette is a remnant of the Yoopee's industrial golden era, when iron ore was shipped here by rail from all across the county, to be loaded on freighters for shipping to places like Duluth, Cleveland, Detroit, Buffalo, Chicago, Gary...but today it has been severed from its railroad spur, and has not seen a ship nestle up to it in decades. What iron ore is still unearthed at the Tilden/Empire Mine is now shipped out via a similar dock in the north end of town, at the Upper Marquette Harbor.

I did find another hole further down that a dedicated person could gain access to the tunnel through, seeing as the cement had been cracked over the decades, but it would involve crawling down amongst the boulders at water-level which meant it was probly flooded...

Then I reached the end and saw this wide-open doorway:

But I could see that this bastard was absolutely infested with big ol' spiders...they looked like the biting kind, too. Think I'll pass on that...it looked like Shelob's Pass in there.

But how weird to have a tunnel like this...ever read The Shadow Over Innsmouth...?

I was just about to get back on the highway to points north when suddenly this beast caught my eye:

At the time I had no idea what it was, but it looked like a school, or sanitarium. Or maybe it had belonged to Northern Michigan University? I got in easily enough, and found that it did have classrooms, and a spectacular auditorium. It was situated nicely on top of a big old hill (which automatically makes any building look cooler), and the roof had an awesome view of Lake Superior.

The stone spires of St. Peter Cathedral are also seen in this next shot, the home of the Catholic Archdiocese of Marquette:

As I later found out, this place was the former Holy Family Orphanage, and was opened in 1915 by the diocese. The children it served were from second to eighth grade at first, but later infants were accepted as well.

There was a great arcaded porch along the front of the building, made of rough-hewn sandstone blocks: 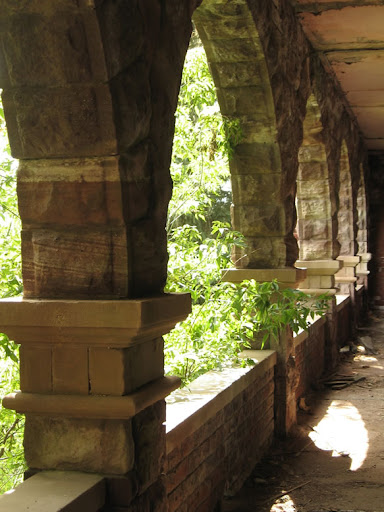 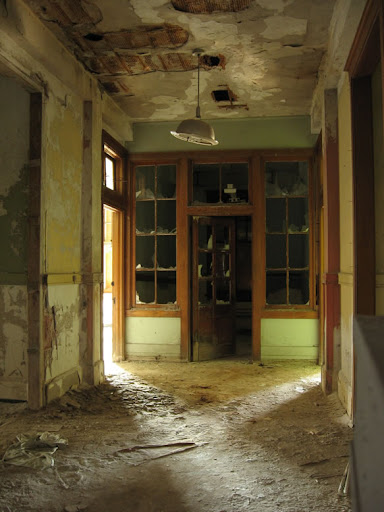 I imagine that in a place with a high concentration of people with mining occupations, orphaned youth, and widowed women, that facilities to house them will naturally spring up. It was also built during a time when Michigan's native Anishinaabeg people were being "educated" in federal institutions known as "Indian schools" (as mentioned in my earlier entry about the Mount Pleasant Indian Industrial Boarding School).

According to research done by a fellow veteran explorer, Dan Glass, Holy Family was initially built to house only white orphans, but ended up accepting 60 Anishinaabe transferees from the overcrowded Orphanage of the Catholic Mission in Assinins as its first residents. I explored the ruins of that orphanage as well, in another post.

The Encyclopedia of American Indian Issues Today talks about this as well, saying that the capacity of the orphanage was 200 at first, and that it took in both orphans, and "half" orphans, meaning those who had lost the mother and the father worked in the mines or lumber camps.

Holy Family Orphanage "was like the army," the book said, with heavy regimentation of daily farming chores and other activities. Prayers were mandatory, work was hard, and meals were probably meager. Still, thousands of Upper Peninsula children passed through its doors to a presumably better life on the outside.

In 1963 the Holy Family Orphanage also opened its doors to some of the refugee children whisked away from Castro's Cuba during what the CIA called "Operation Pedro Pan." I won't go into much detail on this here, but I do talk more about it in my story about the Camp Lady of The Lake.

Holy Family closed its doors in 1982, and has languished ever since, though it was recently purchased and was added to the National Register of Historic Places in 2015. It was bought by Gwinn resident Larry Stille, who wants to convert it into halfway housing for homeless veterans. Mr. Stille himself is a disabled veteran who was homeless at one time, according to an ABC 10 news story. Another news story from January of 2016 seems to indicate that the renovation is about to kick off this year.

The orphanage was also featured in a c.2013 novel entitled, The Best Place, by Tyler R. Tichelaar. 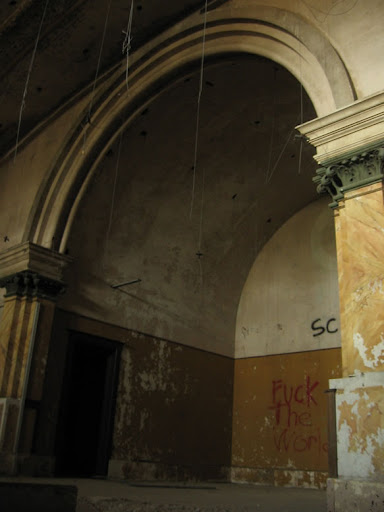 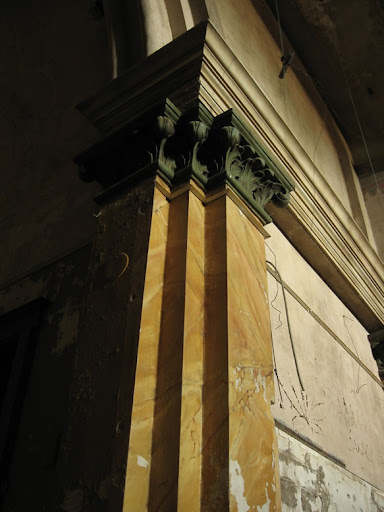 I rolled through Baraga County and finally at L'Anse turned northward for the plunge into the Keweenaw Peninsula. I reached the gorgeous city of Houghton in time for dinner, which was basically the final outpost of civilization before crossing the Portage Canal into the wilderness of the Copper Country.