CLICK to return to part 1.
I woke up from a surprisingly refreshing sleep to an iron-grey dawn and the now doubled intensity of Lake Superior’s wrath. I scarfed a cold pasty for breakfast. The tent was jiggling and rippling like a nervous piece of Jello, and its loud incessant flapping only added to the din of the ripping wind and pounding surf.

We had no idea how far we’d come, but it must’ve been far. We guessed it had to be at least four miles. But again, who knew for sure? We looked down at the shoreline directly in front of our camp, and it was gone. The beach we had walked in on was now underwater. Kind of intimidating, when you consider that only a few feet more and our tent would be adrift. After some thought, we decided to leave camp here, and proceed onward without packs. This would speed our progress, and make for an easier return trip. All we took was our cameras, canteens, and my compass. Now you may say that this whole trip was a little excessive for the sole purpose of checking out some single solitary burned out shell of a building. But keep in mind that I am often out hiking around like this just for the pleasure of hiking, with no particular destination or goal in mind. To add that dimension into the mix really put the spice of questing into the experience of this trip, giving it a defined purpose, as opposed to being merely for pleasure.

We hiked on along similar terrain for another couple hours, though today we needed to stay more in the verge of the woods, due to the angrier seas, and the chilling wind. The sky had opened up and sunlight was now brightening the mood, but this was still by no means friendly weather. To underestimate Lake Superior is to flirt with death, and when you’re within the lake’s fist-swinging range, you have to keep your wits about you. 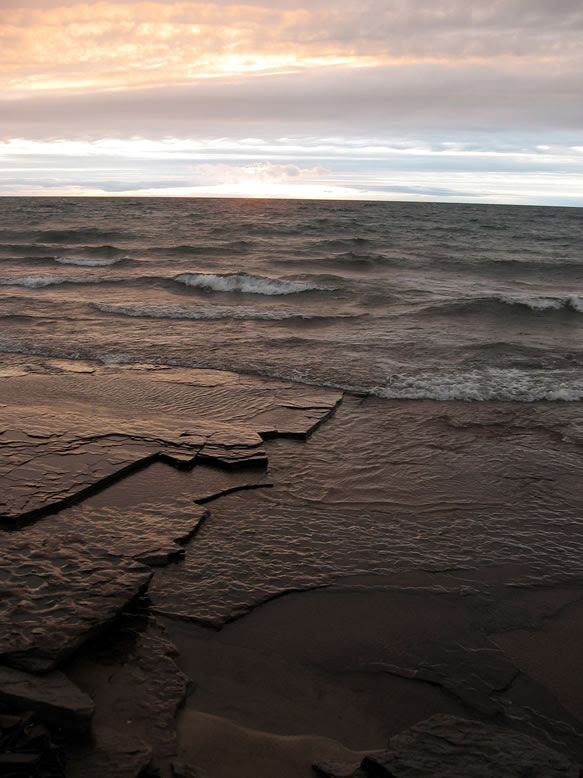 As we started to wonder how much farther it could possibly be, and as the sun mounted in the sky, I paused and held one arm out to the right where the sun was, and held my left out directly perpendicular to it, indicating north. It was pointing straight out to sea. “Dude,” I said to Sloop, “we have to be close.” I saw his eyes lift up as he focused on something behind me.

I turned back to look and was shocked to see the silhouette of something manmade in the trees—a metal roof. It had to be the fog signal building! 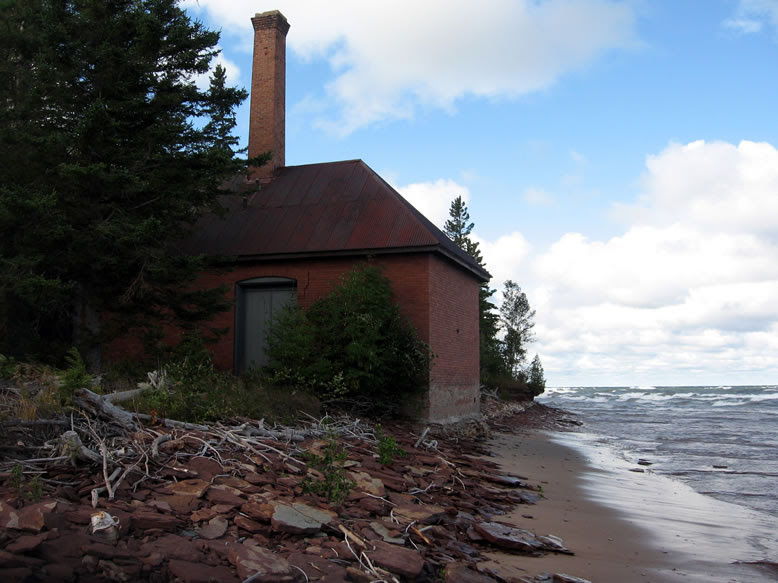 We now crept cautiously through the brush and saw that a clearing was up ahead. The chimney came into view and indeed we knew then that we had attained our destination. Through the boughs of the trees I could see the tantalizing bulk of the lighthouse itself. There were other structures besides. 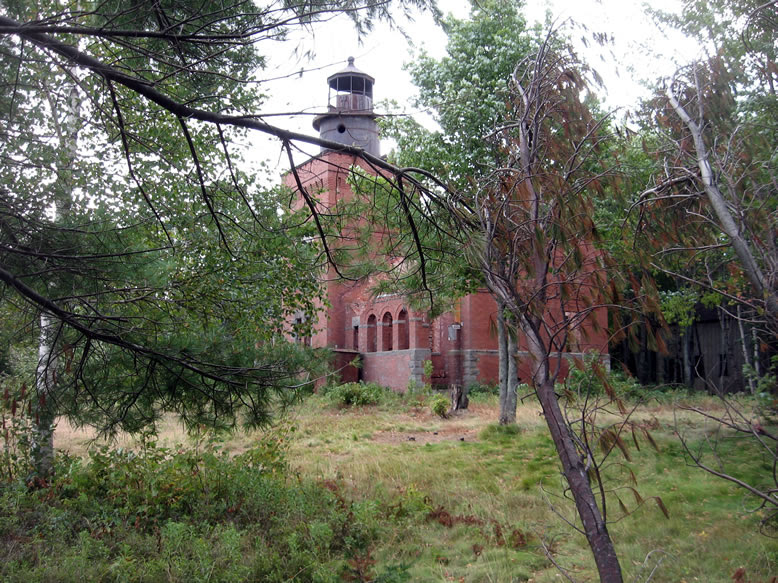 The light was more impressive and ornate than I remembered from the photos I saw. 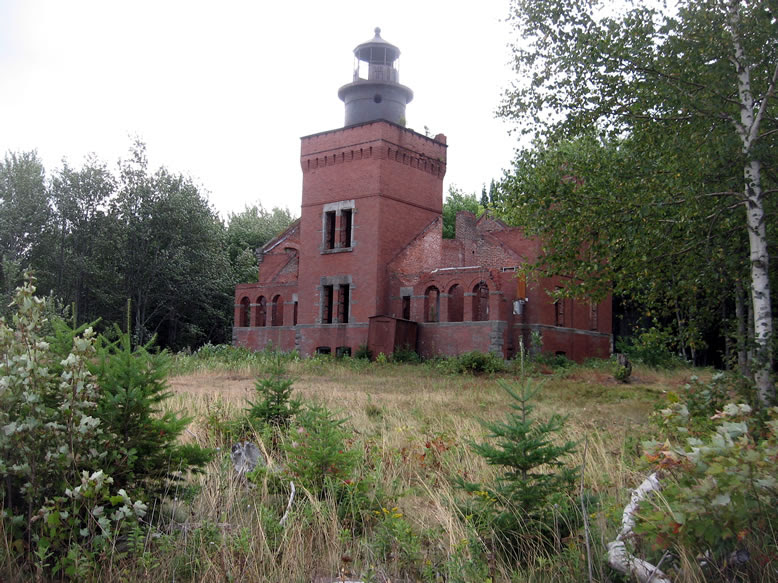 We came to a wooden shack behind the light and sat down to rest. 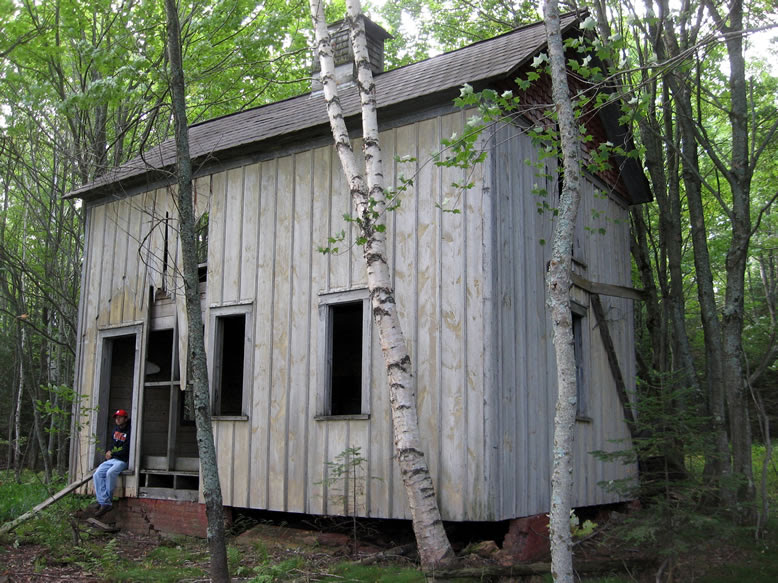 Inside was the immediate evidence that we were far from the only explorers to visit this distant point. Its walls were covered in the scrawlings of locals who had been coming here since the ‘70s. 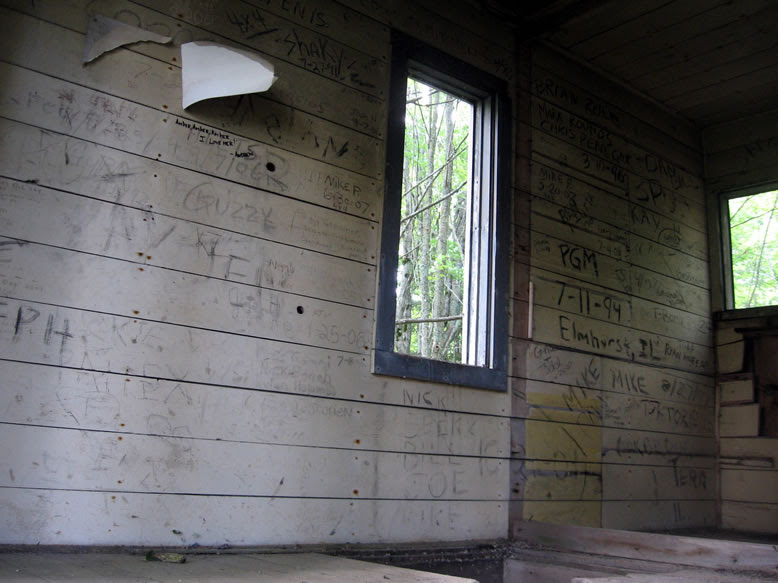 I was not surprised by this. There was even the mark of a crew that had made an expedition here on New Year’s of 1990: 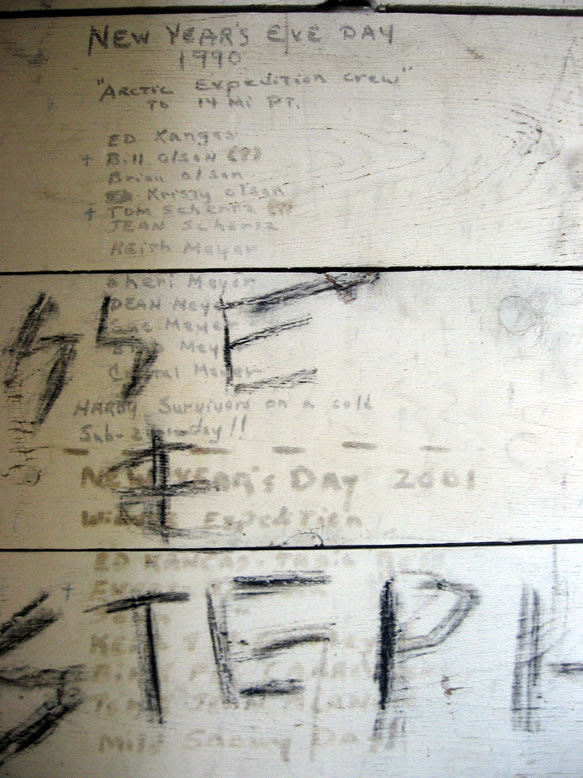 That’s pretty hardcore. But they were most likely riding snowmobiles across the lake ice; I can’t imagine too many people endeavoring a round-trip hike of 12 miles across this terrain in three to five feet of snow with subzero temps and howling northern winds…! 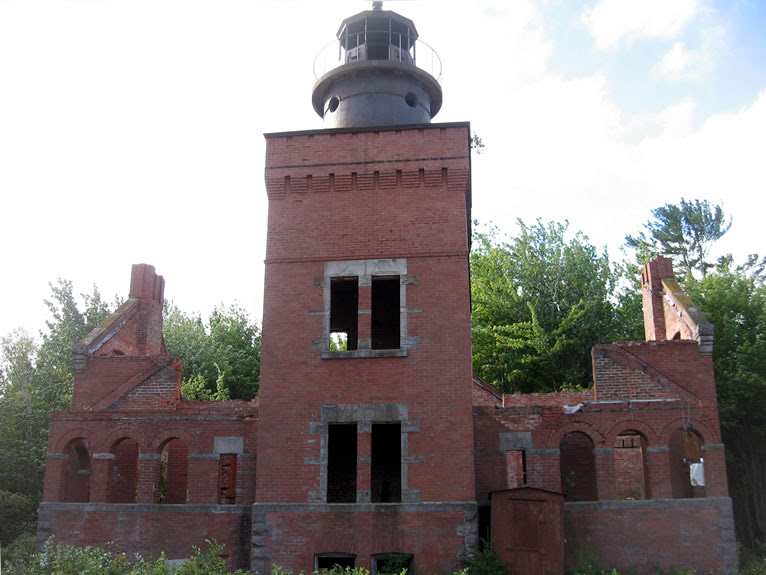 Suddenly faced with the abrupt scenery switch from barren, featureless shoreline to one where a giant hunk of fancy brick architecture dominated our view, Sloop and I made several circles of the grand structure, snapping away with our cameras, unsure of what was the best angle. 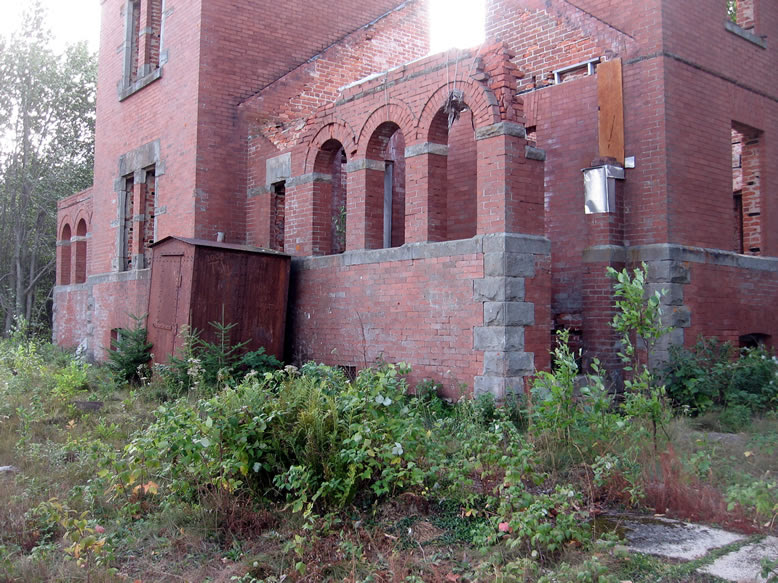 It was a good feeling to know we had successfully made it here, and to put to bed the gnawing nervousness in the pit of my stomach that kept telling me I was grossly underestimating the distance we had to hike to get here. Of course I'm not totally happy with these photos now, but at the time I thought I was doing the best job I could, knowing that there was a 99.9% chance that I would never be standing here again. 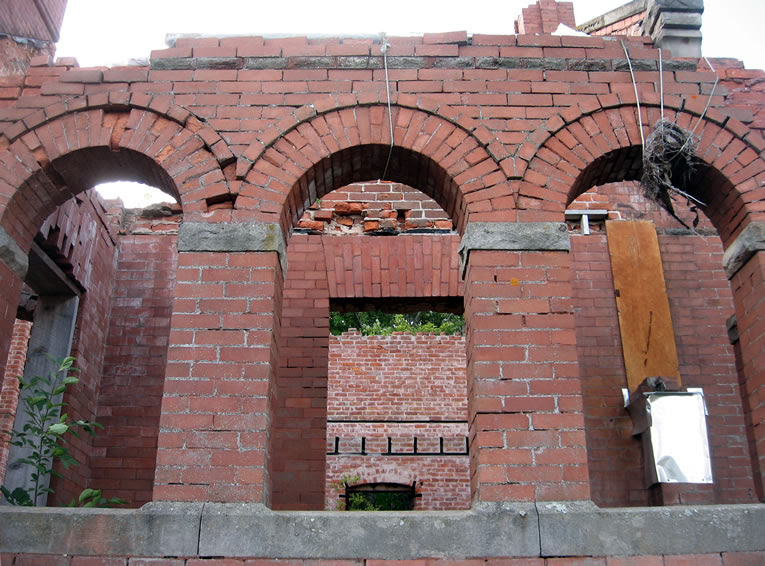 Oh well, some of them turned out good. 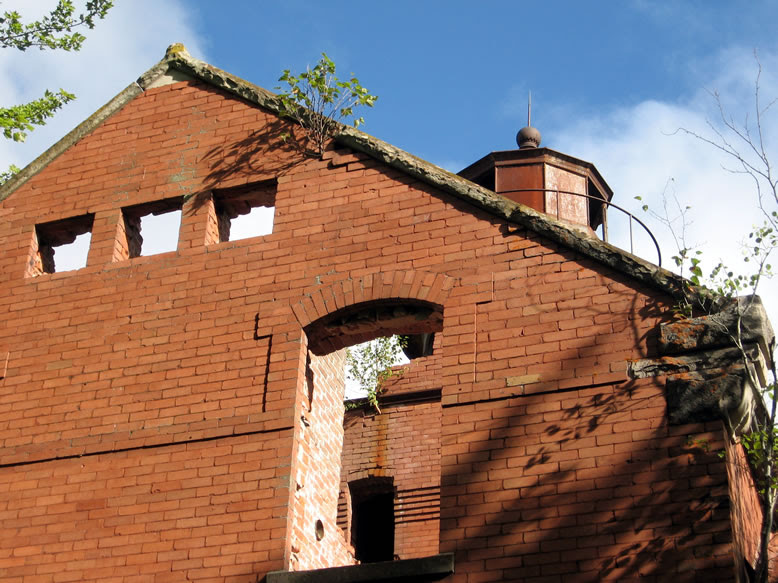 The rear of the structure: 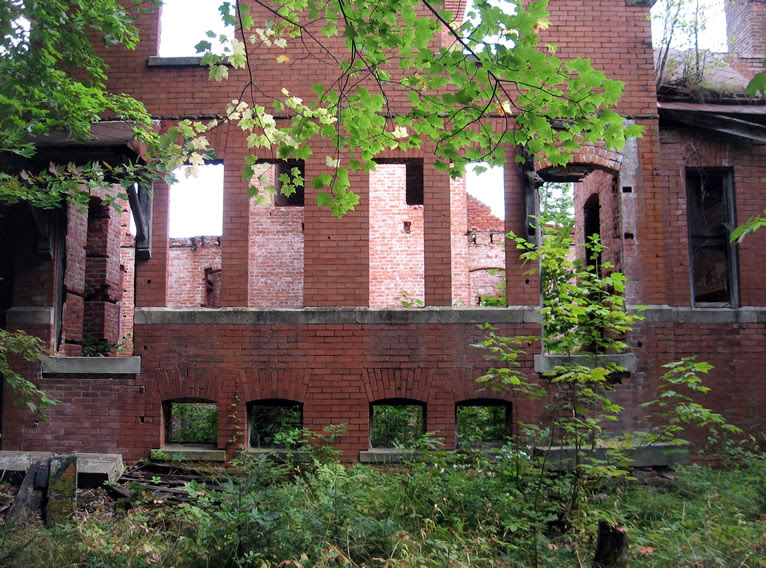 According to the Great Lakes Lighthouses Encyclopedia, the station was first lit in fall of 1894, flickering to life burning oil vapor with a fixed white light varied by a red flash every 20 seconds. The lens was a fourth-order Fresnel, supplemented with its unique red flash-panels. 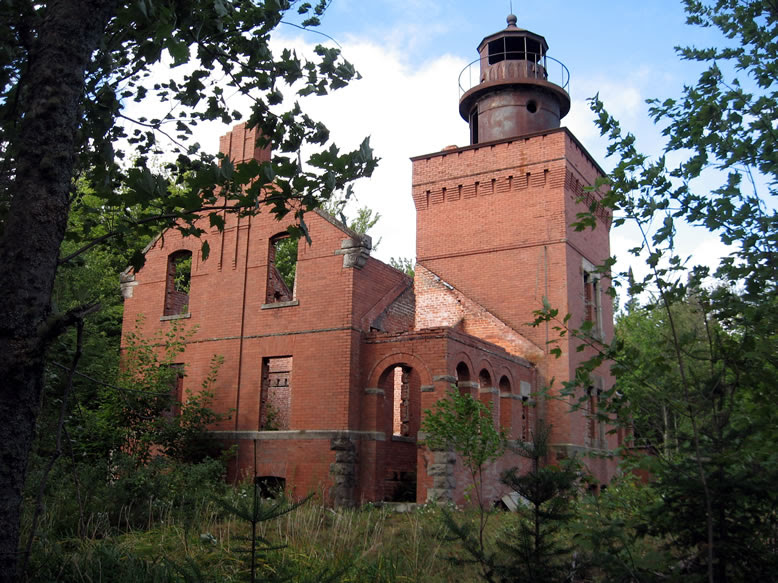 All this was actuated by clockwork which was powered by the slow dropping of a weight, apparently much like that of a cuckoo clock. There were doors into the base of the tower from the basement (seen below) to give access to the lower cable and weight door of the clock mechanism: 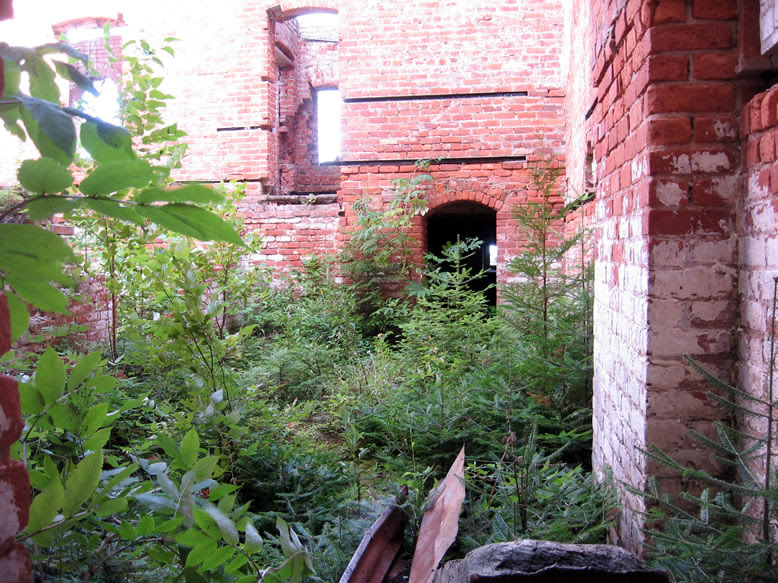 The lighthouse was indeed partitioned into two halves as Sloop had surmised, one being for the keeper and his family, and one for the assistant keeper’s. 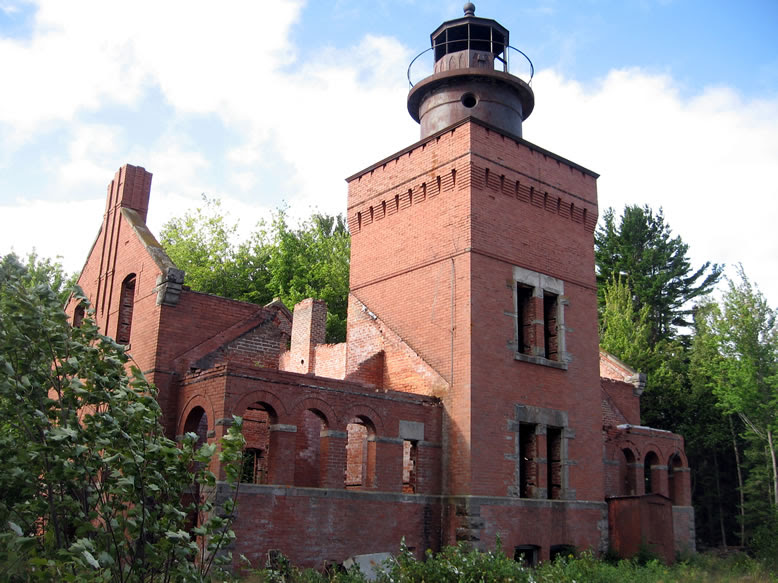 This was one of the most posh stations on the lakes, and “was so well built that few changes or repairs were needed.” It had double brick walls with a void in between for added insulation against the cold Michigan weather. 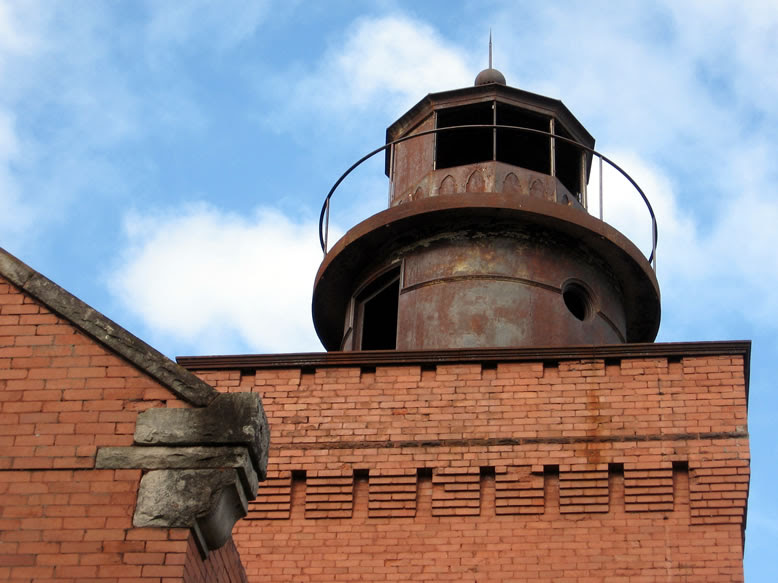 The heavy arches, crenellation, and rusticated stone accents spoke to the Richardsonian era of architecture. 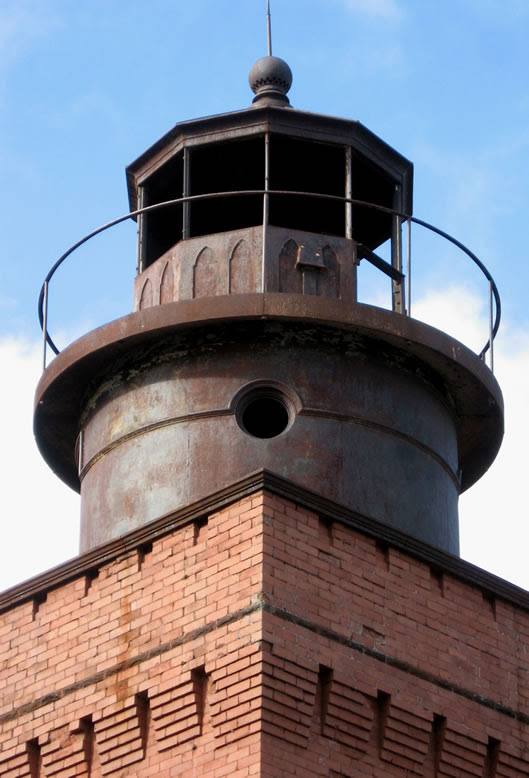 All rooms of the duplexed house were finished with excellent woodworking, which included oak floors and trim work. The entryways had intricately designed red tile flooring, most unusual for a lighthouse. Being at such an isolated location, no one really knows why this station was built with such attention to detail, except that it was designed as a first-class station. It was also completely furnished and ready for the keepers’ occupancy.

It turns out that the board-and-batten “shack” behind it was used by a second assistant keeper, and was converted from temporary housing that was erected at the site originally for the work crews who constructed the station.  These odd brick structures in the basement perplexed us (bottom of frame, in foreground), but were apparently cisterns for collecting rainwater: 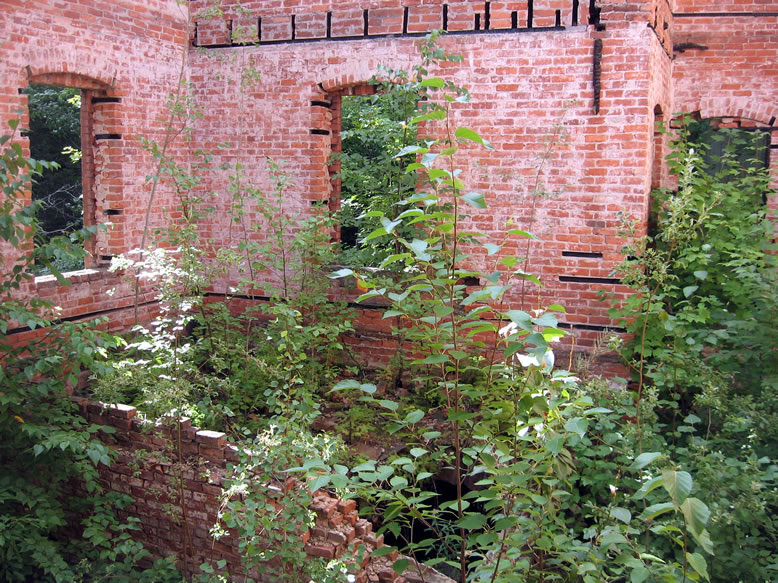 I had originally suspected it was a root cellar or the battery room, though I now know that this was not a motorized station, originally. 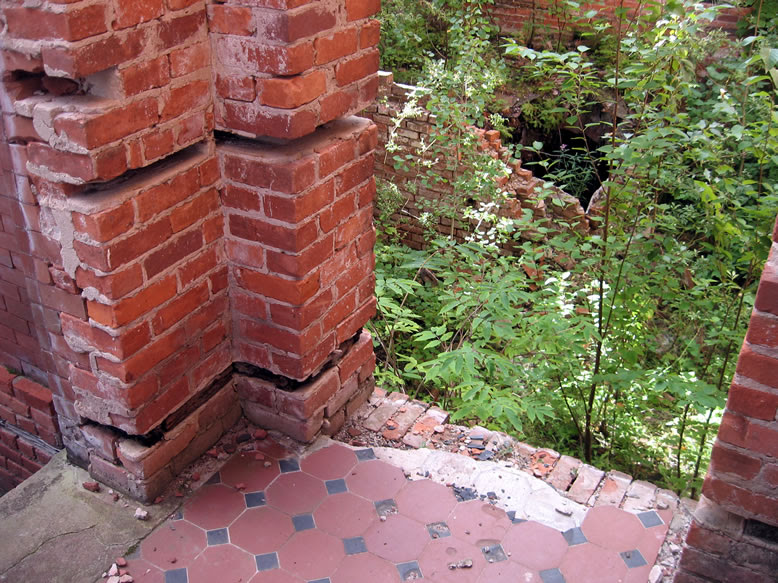 This light was occupied by the keepers and their families during the navigation season (April through early December) only, and during the off seasons they vacated the premises and moved to “a populated area” until spring. 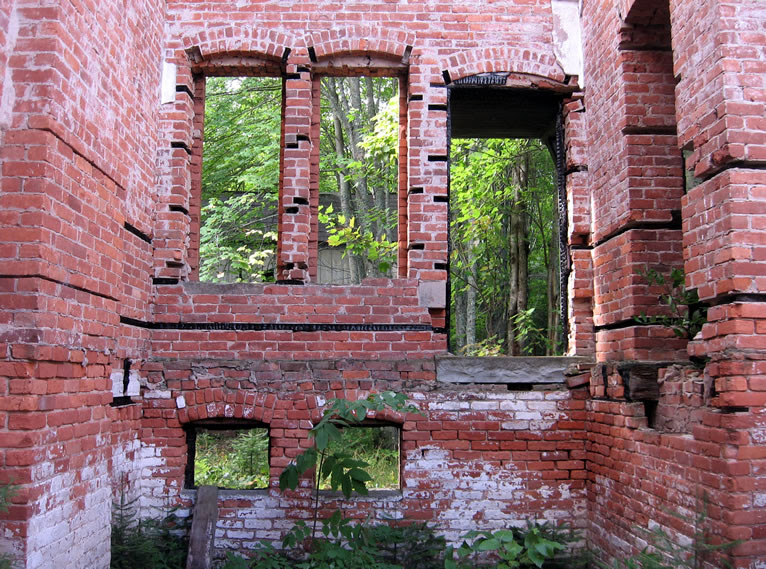 This light was built as part of a decision by the Lighthouse Board to place new lights between existing ones in order to form a continuous string of lights along the coast, to “ensure safer maritime travel.” They chose this one because it was between Ontonagon Harbor Light and the Keweenaw Upper Portage Entrance. 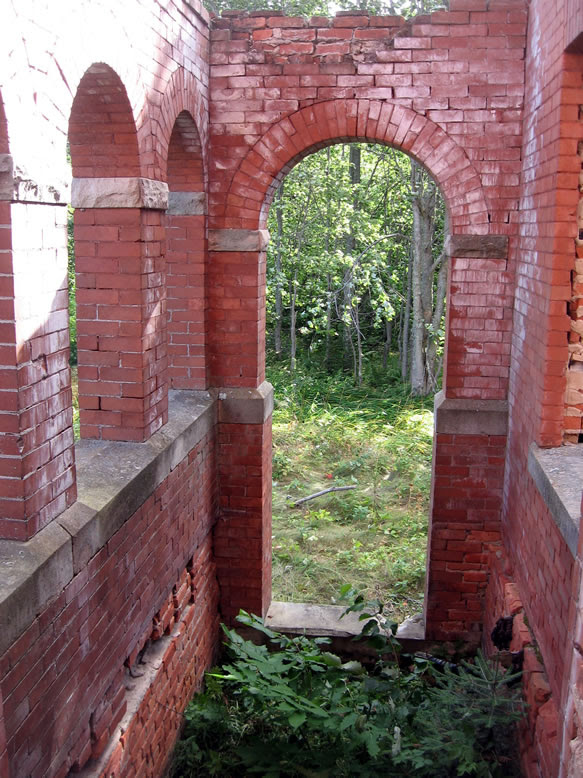 The fog signal was powered by two wood-fired steam engines, and produced five-second blasts separated by 25 seconds of silence. The wood for this and for heating the station mandated that the keepers cut wood three to four times a week. They also fished with gill nets to supplement their diet. 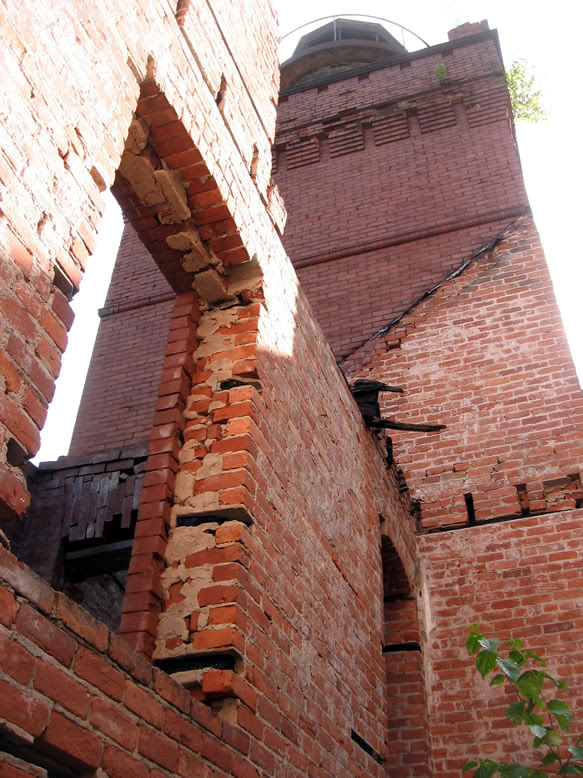 During the 1920s, the keepers reportedly had problems with bears showing up out of the woods, and they began keeping a rifle close to them at all times.

The question of bears had crossed my mind yesterday while we were hiking along (though I did not bring it up), and as we went to sleep with our food in our tent. One of the things drilled into my head in Boy Scouts was “Never ever ever ever keep food in your tent”…nor even anything that has an odor to it, be it toothpaste or deodorant or whatever. Stupid. 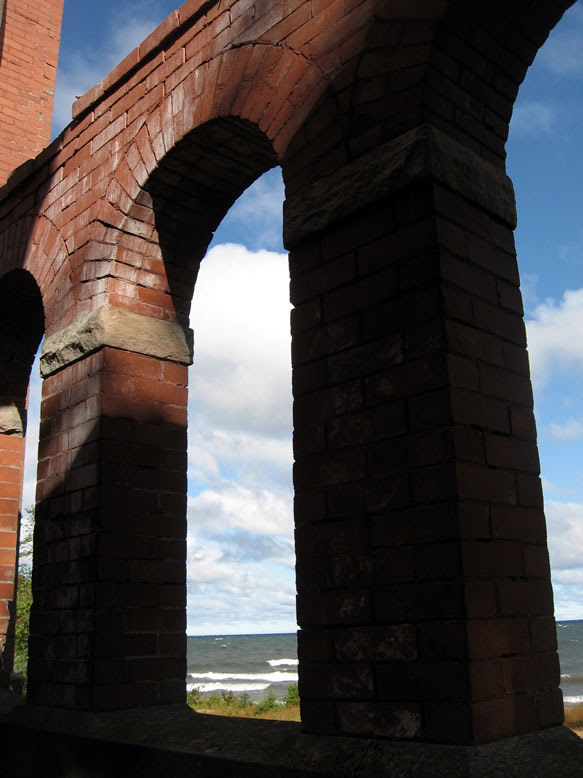 Once the keeper reportedly shot a bear from the lantern gallery atop the tower. They also began leaving the door to the smokehouse open when they smoked fish, so that bears would not destroy the structure in trying to get at the fish. 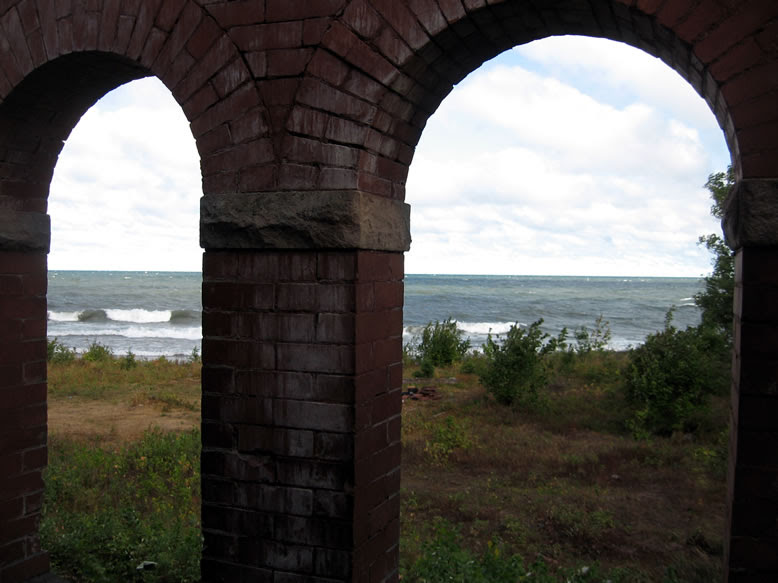 In 1934 the station was automated using acetylene gas; thus it was vacated and its furnishings removed. The Ontonagon light keeper would then venture out once a month to check on it. As ships became bigger and able to sail further offshore, 14 Mile Point’s usefulness was nearing an end. 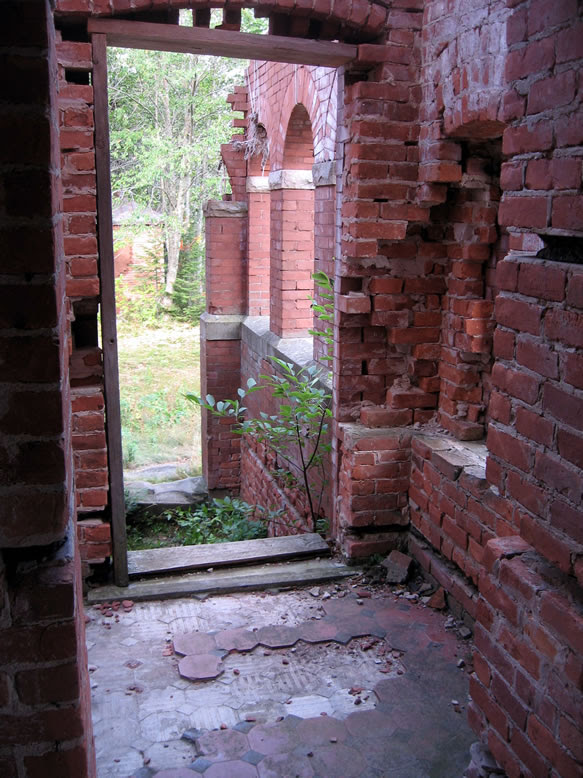 In 1938 most of the property was deemed surplus and turned over to the Department of the Interior. In 1945, the light was extinguished and its equipment dismantled. It was sold into private hands. 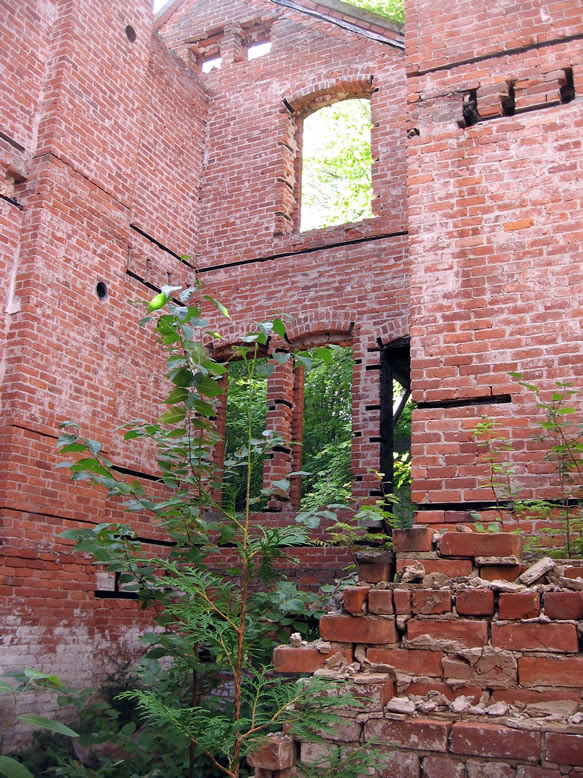 When it finally caught fire in July 1984, the blaze was reported by a passing ship, but the Ontonagon Fire Dept. and the Portage Coast Guard pumper boats could do little to save it. As you can see, there has been some work done to stabilize the ruins. 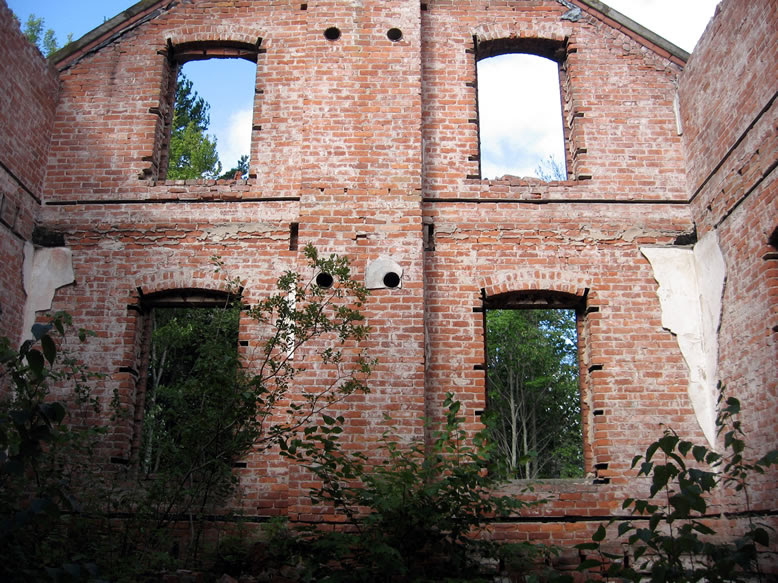 The light-gauge iron rail visible in the next shot is undoubtedly part of the Life Saving Station which was a team of experienced men usually stationed at a lighthouse in a separate building who responded to shipwrecks, like paramedics of the sea, if you will. They had a heavy-duty lifeboat that launched off the beach via a dolly that rode on the rails from their boat house. 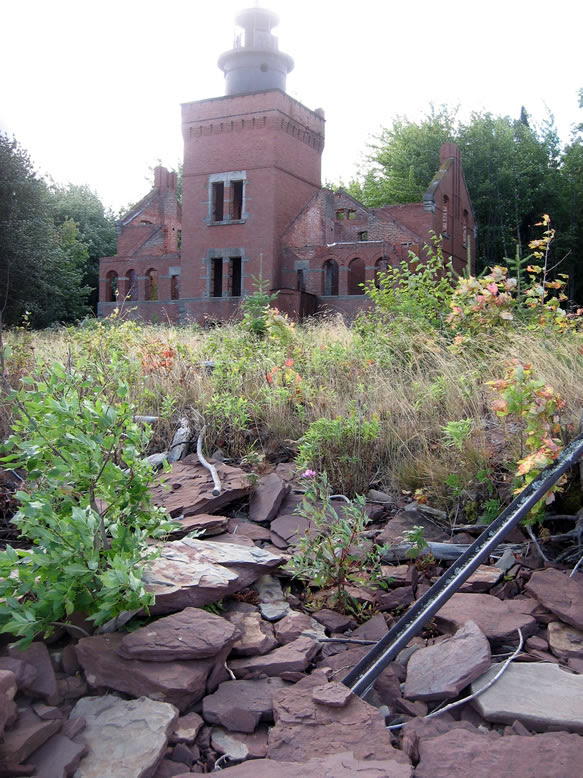 Eventually Sloop and I saw that it was time to go back to civilization and get something to eat before heading up into Copper Country.