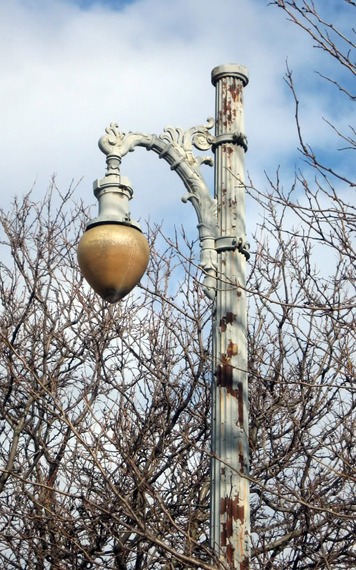 It had always been a mystery to me, until one day when I was gazing at a Detroit map for no reason at all, I suddenly realized--or decoded, if you will--the secret of Oakman Blvd.

Sure, the road zig-zags all over the west side, breaking all boundaries and geometric patterns in a seemingly schizophrenic path, and you yourself may have wondered just WTF the point of this nonsensical road ever was, other than to look fancy and confuse tourists. The purpose of the average road is to take you from one city to another, or to allow traffic flow from one end of a major city to another. Oakman on the other hand begins in the middle of the city, darts around for a bit, and ends in the middle of the city. But there is no mistaking the purpose of this boulevard.

Even though they weren't shown on my map, it slowly dawned on me...the boulevard connected the Ford Rouge plant in Dearborn with the Ford Model-T plant in Highland Park. That can't be a coincidence. I later found out that it was also lined with the grand houses of many higher-up Ford employees. No doubt this stately avenue was once the preferred route for escorting distinguished guests of the Ford Motor Co. while touring them through the Ford Empire. Probably was also a path to work for many affluent white collars who owned their own automobiles as opposed to riding the streetcars.

It was named after Robert W. Oakman, the man who Mayor Hazen Pingree retained to reform tax structure in Detroit, when the paving of streets and removal of traffic bottlenecks became a huge issue. He was also making a decent living as a real estate agent in the rapidly expanding city. One day in 1906, Oakman was eating downtown at a restaurant on Woodward Avenue. At a table across from him was none other than Henry Ford. Mr. Oakman overheard Ford's conversation that he was in need of land to build a new plant for his company, and suggested to him a site in what would become Highland Park. When Ford built his plant there, he also turned the stretch of Woodward Avenue in front of it into the first mile of paved concrete highway in the world.

Discovering this revelation about Oakman Blvd., I took to studying my map closer.
Another road, Fordson Highway, which is actually no more than an inconsequential sidestreet that due to its angled course dead-ends in several places and doesn't really go anywhere, is similar to Oakman in this respect. Of course, wherever you see the name "Fordson," this refers to Edsel, Henry's only son and namesake of the Fordson Tractor division of Ford Motor Co. If you grew up in Redford you were probably likewise confused as to the purpose of this slanting, out of place street, and why on earth it would ever be referred to as a "highway."

Well, out of curiosity, I searched for any possible ulterior purpose behind Fordson Highway's nearly pointless, diagonally-slashing path. A moment later, I held up a straight-edge, and traced a line along Fordson Highway out of the heart of Redford where it starts, past where it dead-ends at Telegraph Rd. in Dearborn Heights, and...directly through the center of the Fair Lane Estate--Henry Ford's personal residence. Not only that, but it crosses a street named Henry. Coincidence? Perhaps. Check it on a map! I swear, Henry left a secret treasure behind somewhere--and I am gonna find it....

If you think that stuff's interesting, check out Henry's involvement in why there is no road going through the Huron Mountains region of the Yoopee.