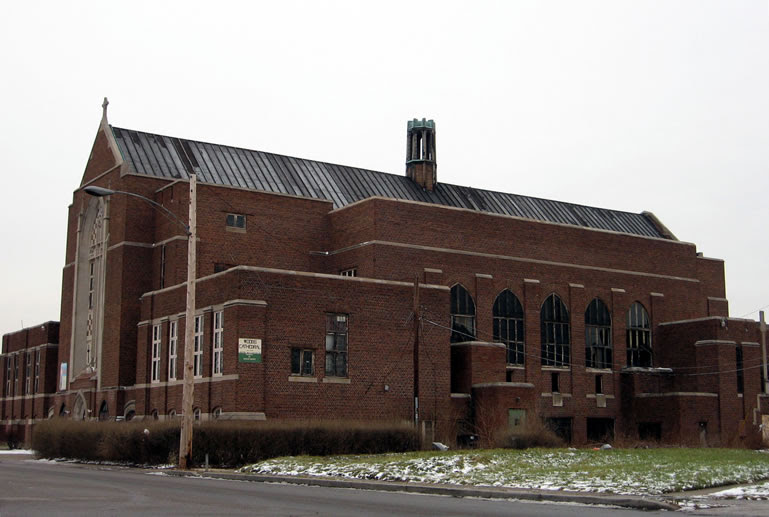 I had originally thought this church was more like 1930s-'40s vintage, but it was actually finished in 1925. 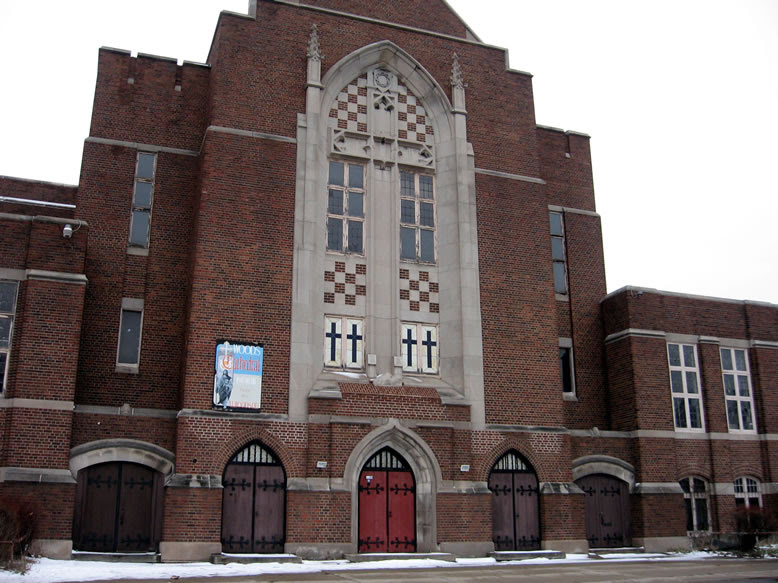 You can definitely see that it breaks from the classical form in that there are no repeating columns along the side aisles to "hold the roof up"...it seems almost to float on its own: 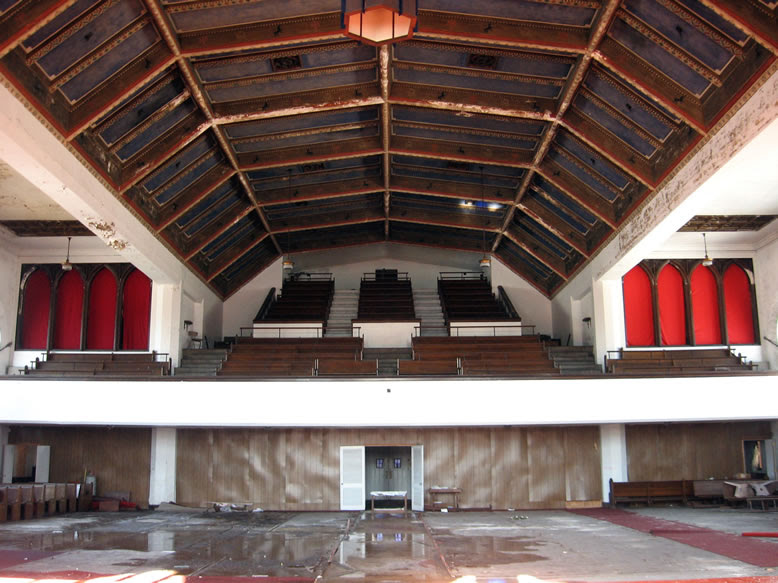 Not to mention we now have stadium seating in the balcony as opposed to a choir loft, and the structure seems to be concrete. 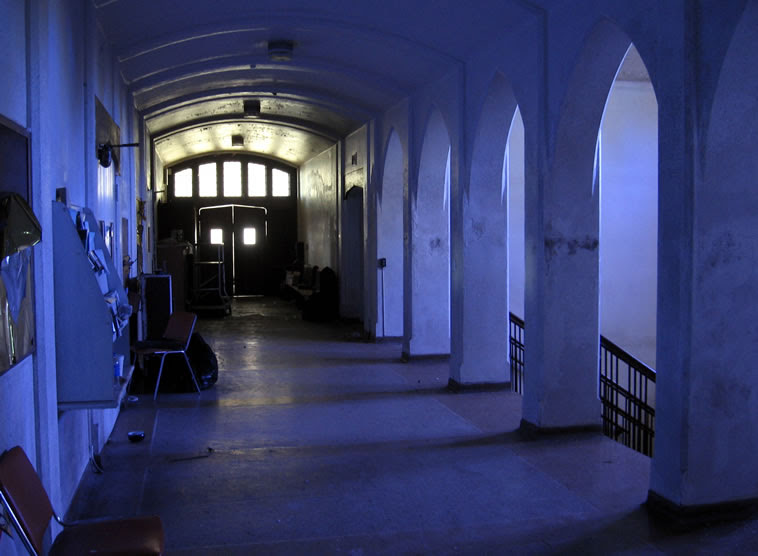 The vestibule and entry hall are bathed in a cool blue light, almost like the old Motown offices in the Donovan Building. 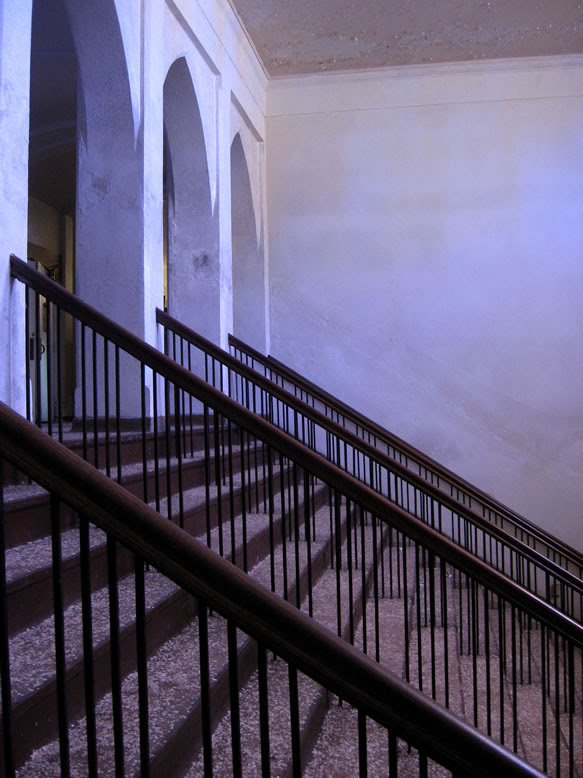 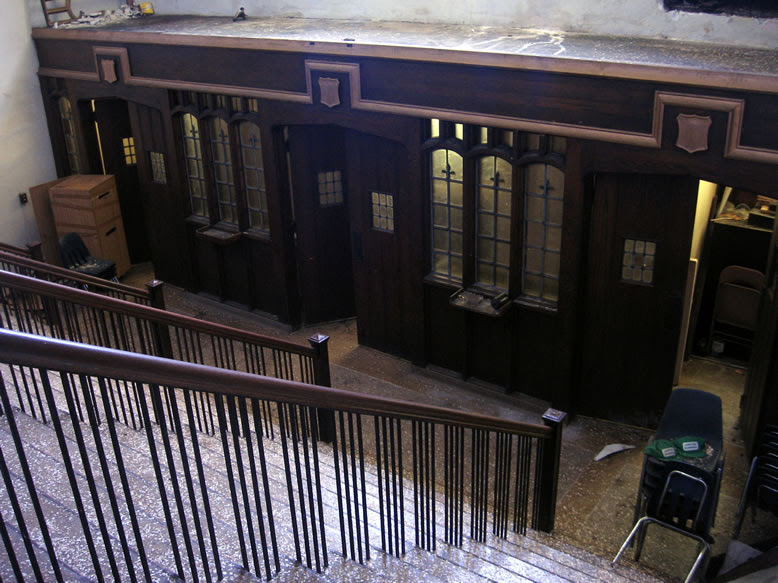 Visy was once one of the biggest parishes in Detroit, which is saying a lot, since according to the Detroit Free Press Detroit Almanac, the Holy Redeemer parish down in Southwest was the largest English-speaking catholic congregation in the entire world during WWII. So I was surprised at how small this church seemed on the inside. I envisioned it to be a much more monstrous hall. 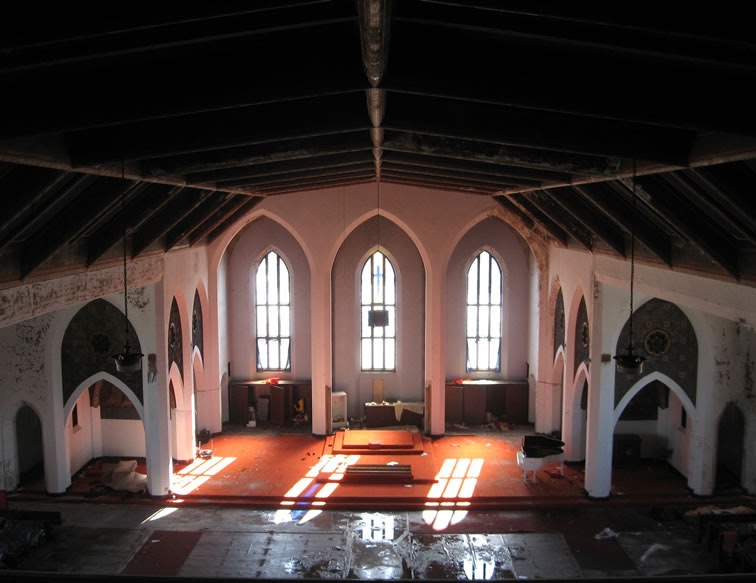 I had heard that this parish was planned to be much bigger--intended by the archdiocese  to become the cathedral in fact--but the grandiose building plans were kiboshed by the same Great Depression syndrome that killed other big projects, such as the three-towered Fisher Building, and the 80-story Book Tower.

I think the Cathedral of the Blessed Sacrament is in a much better location anyway. 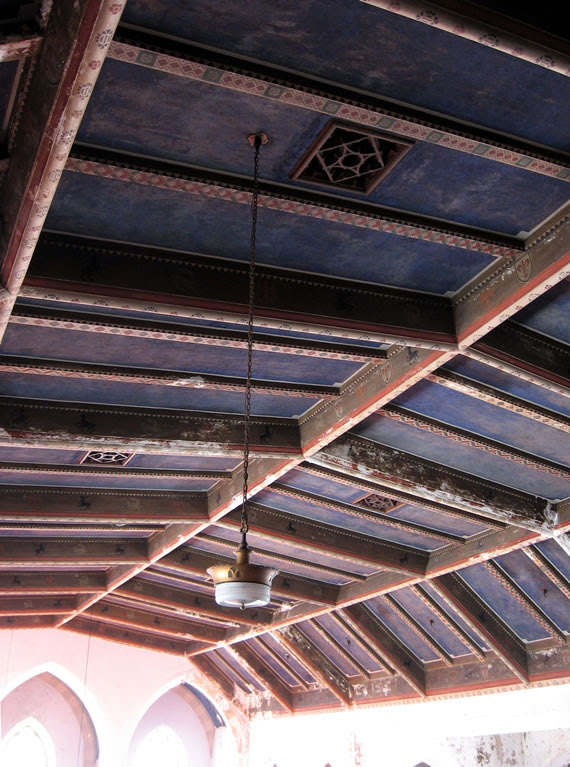 The coffered ceiling and the murals in the shrines in the transcept were still in good shape, and quite the pieces to behold... 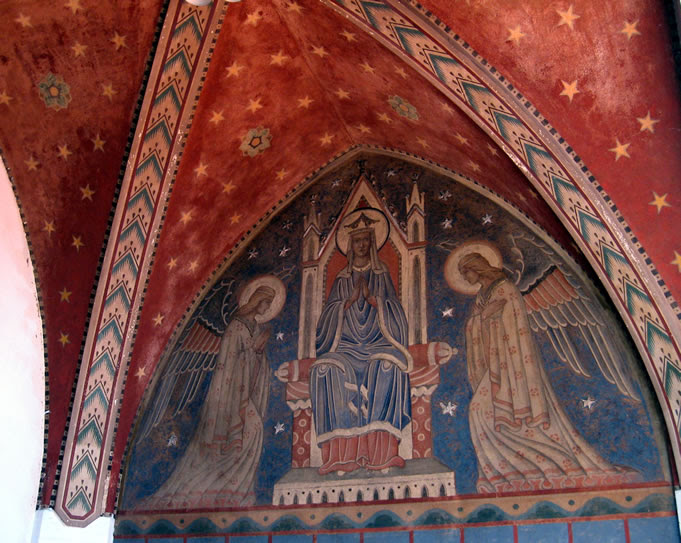 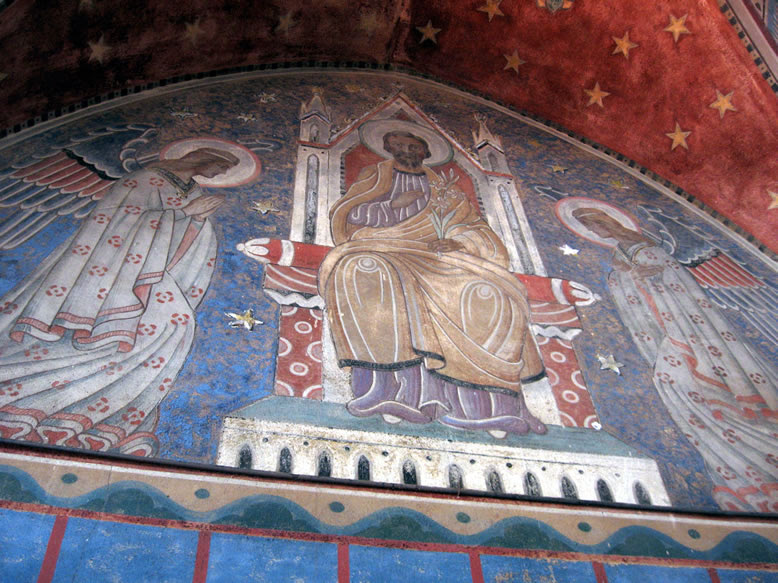 ...as were these panels: 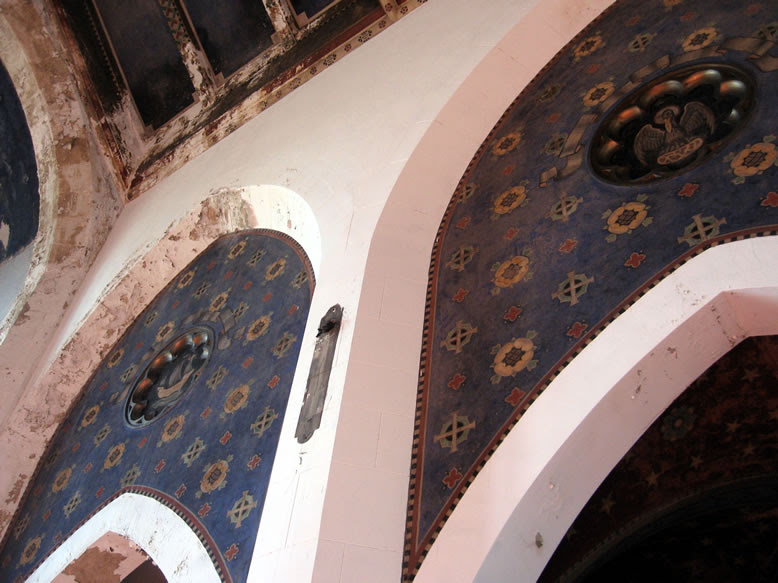 Then there was this cabinet thing: 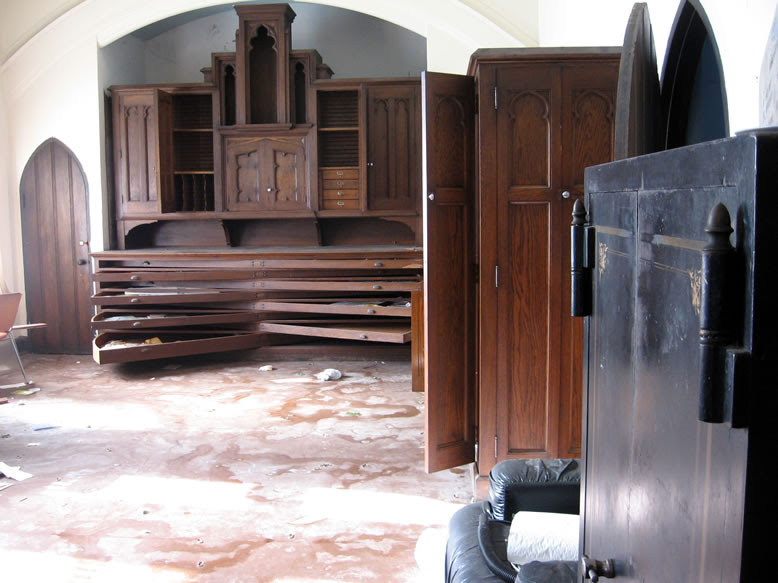 Wow, what a piece of furniture...thing could be worth a small fortune to somebody. It still functioned perfectly. Those bottom drawers are huge semi-circles that can spin all the way out. 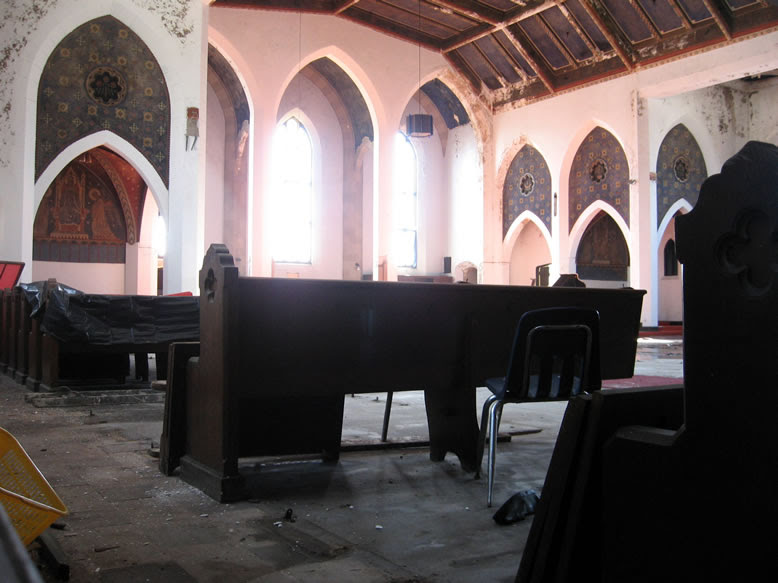 Visy's congregation shrunk so badly from population loss that the main church building was sold by 1983, and the remaining parishoners huddled together in the chapel of the parish convent on the other side of the block. The convent itself was huge (for a nunnery), illustrating just how populous this neighborhood used to be to justify a ministerial presence like this. It is just north of New Center and the hospitals. 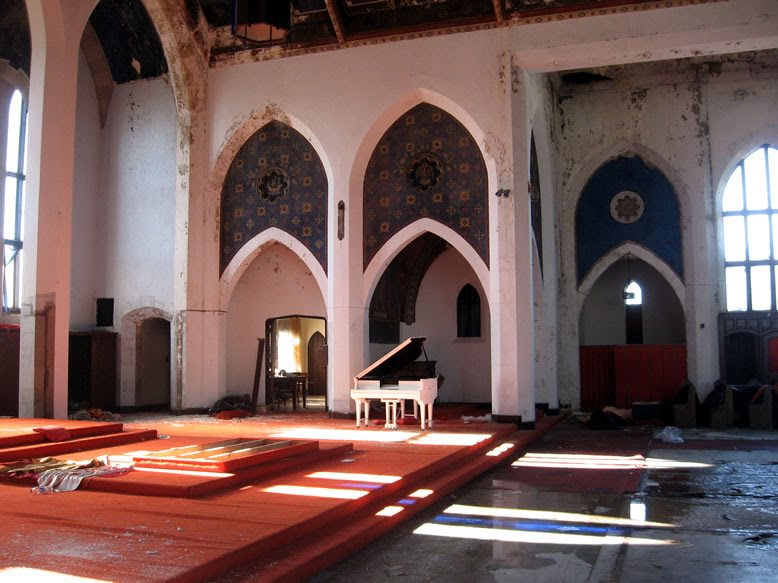 I'm thinking that with the digging of the Lodge Expressway trench and the sparking off of the 1967 Riot mere blocks from here, Visy experienced just about the worst possible sort of white flight. It was getting crowded in this hood anyway, and I'd say that a fair amount of the residents here were well-heeled enough to be lured away by the pull of the suburbs in those days.

The rest were not so well off, and they had the Lodge cut right through their houses...which basically meant buh-bye Visitation parish. By 1989, this parish was officially disbanded by the Archdiocese of Detroit, and those who remained either died off, moved to the 'burbs, merged with other nearby parishes, or went back to being pagan I guess. 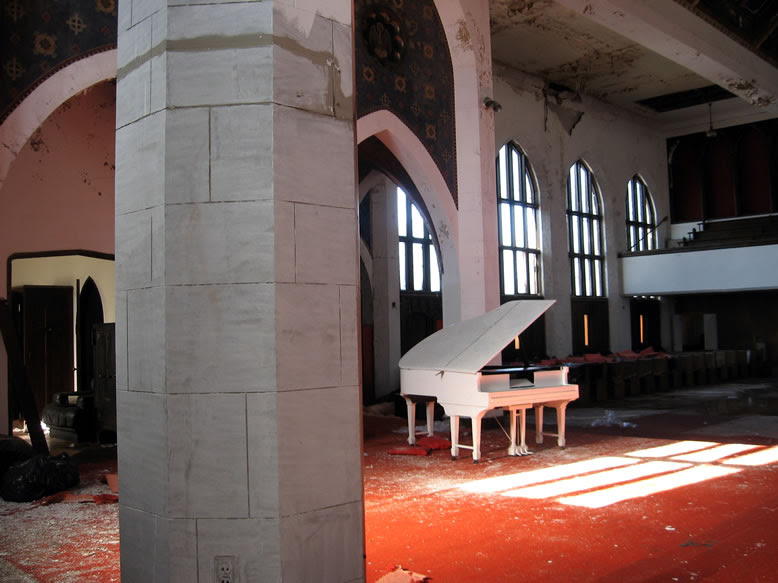 It was used by Baptists(?) for some time (hence the decidedly un-catholic white piano, I suspect), but now sits abandoned and rotting. All the stained glass in the church has been swiped except for this one single pane: 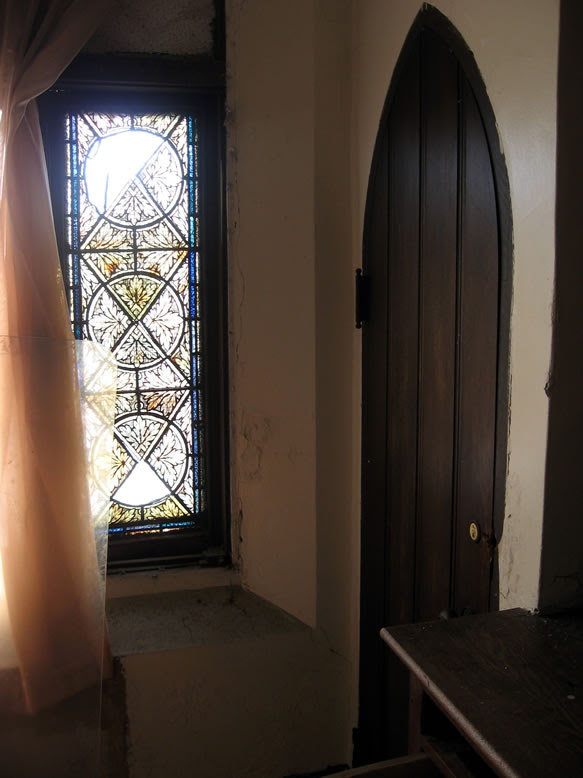 And this one I guess: 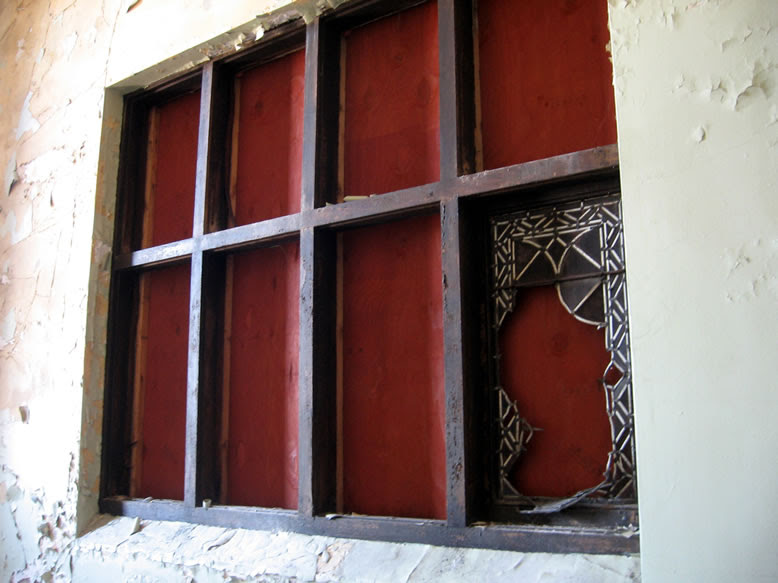 ...Who knows where it all went. Hopefully some other church in some other city, and not hanging over the basement bar in some yuppy's McMansion.

Blurred, this view could be of some classic European city: 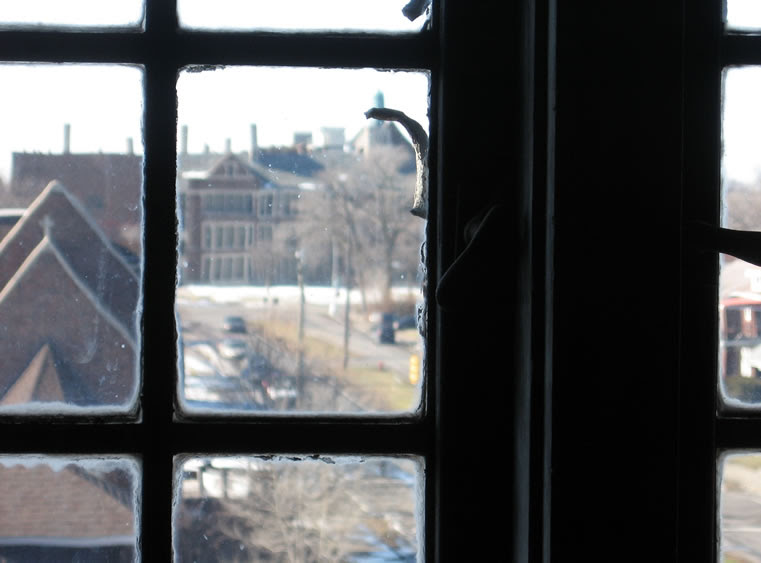 This is a view down Webb Street: 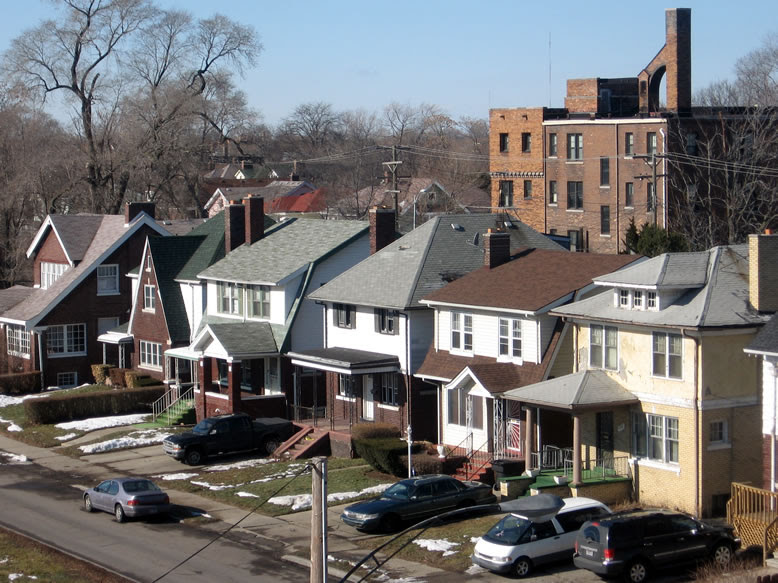 ...it looks like that chimney in the upper right has a flying buttress! Maybe this is a unique architectural occurrence? Either that or Santa bypass surgery. 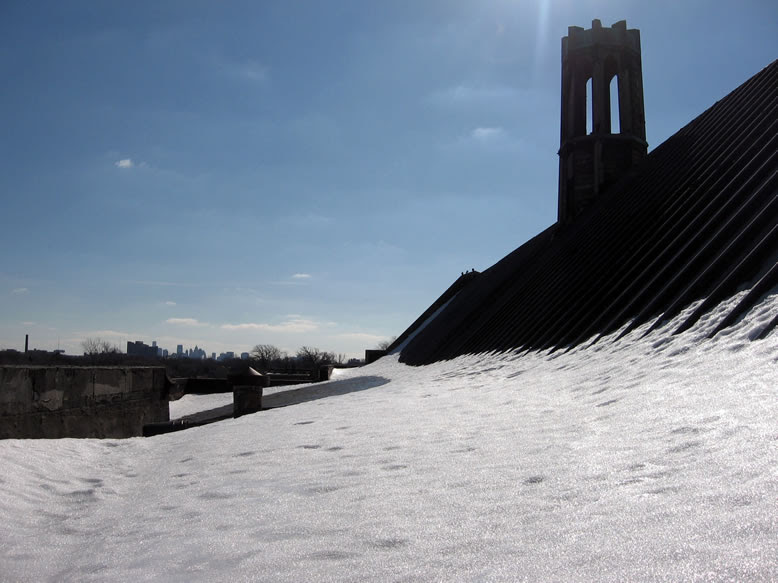 Sure enough, all the copper has been peeled off Visy's roof already, and the grounds have become a dump of convenience: 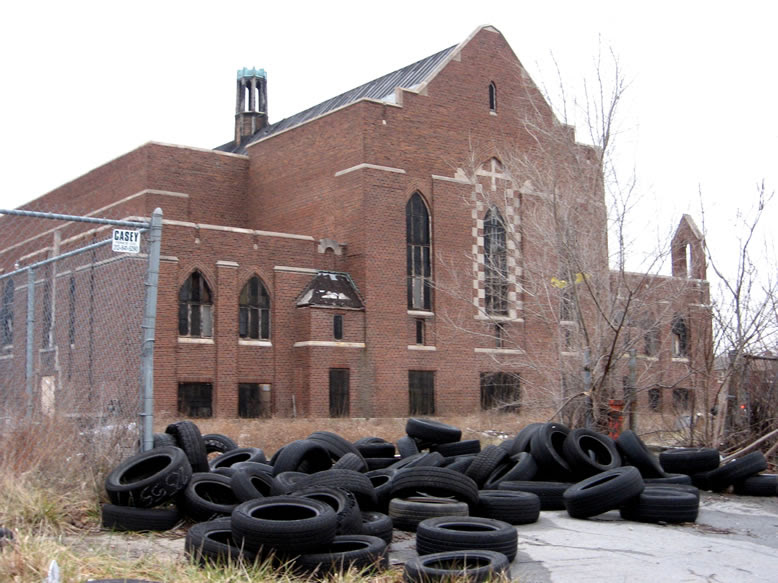