This is one of those places that I cluelessly explored on a whim, only to later find out that it was legendary for one reason or another. If you are a fan of Detroit-based music, then you may know the name White Room Studio. When I checked out the joint, I knew nothing about it other than it was once obviously an old-timey department store, and that despite having a party store operating out of the main floor today and allegedly (according to Detroitblog John, who was there with me that day) a couple squatter apartments upstairs somewhere, it was essentially another typical abandoned skyscraper.

This building, at 1145 Griswold, has been known as the Capitol Park Building, the Peter Smith & Sons Building, and probably other names besides. It stands 11 stories tall and was built in 1912. It was designed by local architect Leonard B. Willeke, who was better known for his houses (he even designed an addition to the Sorenson House in Rouge Park, whose ruins I explored in an older post).

Somewhere I found this unlabeled newspaper clipping from August 14, 1901, showing a very different rendering of this building by a different architectural firm (Mason & Rice), and what would have been a much taller tower, had it been built:

But first, we planned to access our target through the also-vacant Colonial Building next door:

...Pretty soon photos like that will be a thing of the past, with our switch to LED street lighting and the removal of the old orange-hued arc-sodium lamps.

The Colonial Building was built in 1887 as the Brown Brothers Cigar Co. factory, and designed by Detroit architect Gordon W. Lloyd. It was pretty empty, except for some really nice views of Capitol Park:

Just about at the center of that photograph is where the old frame structure would have stood that served as the capitol of Michigan since 1823. It served in that capacity until 1847 when the state government was moved inland to Lansing, out of fears generated by the recent Patriot War that keeping the capitol so close to the Canadian border might make Detroit a tempting target for the British again. That was also the same time period in which Fort Wayne was constructed on the Detroit River, and for the same reason. The old state capitol at Capitol Park was used as a schoolhouse until 1893 when it burned down.

The interior of this building was in very good shape, as it had evidently tried to undergo a metamorphosis into some kind of loft development recently, but like so many others in pre-2008 Detroit it had stalled, or failed entirely.

Some huge lunette windows are always a plus, in my book:

Poking my head out one of the expansive windows, I looked west down State Street:

Having reached the top floor of the Colonial Building, we now began looking for the roof access. Sometimes roof access is tricky to find, but this time we just couldn't seem to figure it out.

Both he and I stopped, then went around the entire floor again, just to make sure we hadn't somehow missed it. But sure enough, there was no stair, no ladder, and no little closet in which it could be hiding. There was just this big ole skylight, through which we could see the Peter Smith & Sons Building looking down at us and laughing:

John and I looked at each other again to see if we were not in fact going crazy. We couldn't believe it was possible that there was no roof access in a building this tall...it didn't make sense. We didn't even find a spot where a hatch might used to have been. Bizarre, very bizarre indeed. This was unacceptable; somehow we were going to get on this roof, and from there into the Peter Smith.

We looked around for material in the room we might be able to stack up high enough to reach the ten-foot ceiling. Luckily a sprinkler pipe passed near enough to the skylight that it could serve as a foothold. I could tell my partner was not enthused in the least about this plan of action, but at the same time he knew there was little alternative. So with our wobbly stack of random crap, we carefully made our way up and through the skylight, with me going first. I should've taken a picture of it, or at least of the look on John's face as I was reaching down to grab his camera bag from him, but alas, these are not the most convenient times for photography.

Well, here we were.

Another objective of this mission was to see if there was access via the double-decker skybridge to the People's Outfitting Building:

The People's was one of the few significant buildings left that neither of us had been in yet, and since it was currently sweating threats of demolition from the Book-Cadillac renovation project, it moved even higher up on our list.

As you can see the Peter Smith Building had a few masonry issues...

This was one of the better views I had ever gotten of the Washington Apartments as well:

The original name of this building was J. Henry Smith Building, and it was built in 1912 to house the Peter Smith & Sons Grocery Co., mercantile tenants, and other office space. Mr. Smith, a rather prominent citizen at the time, also sublet the Bamlet Building on the other side of the park, and notably bought out the old Hotel Cadillac's owners, before he in turn was bought out by the Book Brothers for a considerable sum when they wanted the parcel for their new Book-Cadillac Hotel.

So, back to White Room Studio. What was recorded here? Randy of Detroitfunk, who lived in the building in the 1990s, says…


Let's start with: Aretha Franklin, Electric Six, D12, Red Hot Chili Peppers, Bob Seger, Tori Amos, and the Detroit Cobras. Anybody ever hear of a guy called Kid Rock? He recorded “Devil Without A Cause” right here at White Room. "Welcome 2 the Party (Ode 2 the Old School)," "I Am the Bolgod," "Bawitdaba," "Cowboy," "Only God Knows Why," "Wasting Time"...

...not to mention the album "Early Morning Stoned Pimp."

Kid Rock worked as a janitor here at White Room in order to buy studio time in the mid-'90s. My partner explained that this was actually the first building he ever explored (oh so many years ago), on some random chance, which is what he said sparked his desire to start Detroitblog in the first place.

The building was a total time capsule. Its odd location and unorthodox footprint made for an interesting floor-plan. One of the beautiful things about Detroit is its seemingly kaleidoscopic platting, which is in turn further modified by the curvature of the Detroit River's shoreline. This results in a very interesting aesthetic and geometrical patterns inland, affecting the footprints of many of its buildings, especially this one...in turn making for unique photographic views of the city.

Each building has its own unique angle on the rest of downtown, and Capitol Park is one of the most flavorful parts of downtown; not a single building is newer than 1929, and they look it. This is your "dirty city" right here…everything seems to be the color of pigeon crap. In fact, Detroit’s oldest and first skyscraper, the former Chamber of Commerce Building, is right here on the left, a building well over 100 years old:

The building on the right was the then-vacant David Stott Building, which I also explored in another action-packed post.

According to the recent book Capitol Park: Historic Heart of Detroit, by Jack Dempsey, the Peter Smith & Sons Co. occupied the bottom five floors of this building originally, with the upper five being rented out for office space.

I am not sure if White Room was in the area of the building you see here; though it definitely bears the hoofprints of a partier’s lair of some type.

It seemed highly likely that someone still lived here at least part-time, so we moved very cautiously.

I see we have quite the pad here. A full-size bar in the living room, chessboard flooring, a bulk case of microwave popcorn...and the orange construction barrel really ties the place together. I wanna party with these guys.

Here, in what seemed to be a bedroom, a strange miniature stage?

The purple / lime-green color scheme is a nice touch. Someone went crazy and smashed this guitar...

The rest of this floor was filled with arcade machines, in various states of disassemble. I’m guessing it was once some kind of repair shop. And maybe it was a support business to the arcade that used to operate on the main floor of the Farwell Building just across the park.

Attached was another abandoned building, the former United Savings Bank at 1133 Griswold, which from the street is almost indistinguishable as a separate building from this one. But it was inaccessible, no matter how we tried to find a way between the two, and we weren't about to smash a window out.

Looking down on the roof of 1133 here, you can see a crazy scene, which we spied many a time from a block away, from the roof of the Lafayette Building, wanting to check it out closer…you can see the mannequin, but there’s other weird junk going on there. A traffic light on a tree, some random found items, a sculpture…a garden…?

Time to hit those stairs again.

Near the top floor, 11 stories above the alley, was the skybridge across to the also-abandoned People's Outfitting Building, another former department store:

We learned however that the way in was sealed, and we would have to come up with another approach. That was a major bummer; nothing is more convenient than skyscraper-hopping. The roof was decent, and would have made for a nice nighttime chill spot if not for the prohibitively labor-intensive method of getting into this place.

Another currently vacant skyscraper on our watch-list (though we didn't harbor much hope of getting in) was 1001 Woodward:

The views up toward the "Necklace" were pretty grand indeed:

I have actually been up in one or both of these white buildings (on the left, below) before as well, since we knew someone who lived there, but I was a little too drunk at the time to remember which one:

John and I of course snuck down to the main floor and let ourselves out, instead of going all the way back through the Colonial Building and dealing with that hellacious roof-climb ordeal again.

During the late 2010s downtown real estate bonanza, the party store on the main floor was recently evicted from the first floor so that the building could be marketed / gentrified as a whole.

...And it was all thanks to graffiti artists, as evidenced by this extremely well-thought-out mural on the side of 1133 Griswold nextdoor: 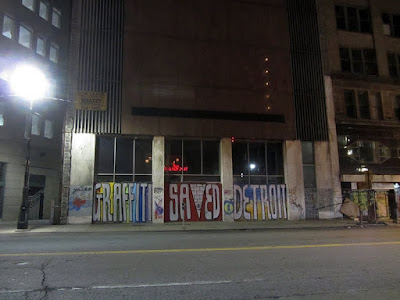 Oh lawdi, we been saved! Hallelujah...!!