The League of Union Clubs

The Clark Building was yet another of those downtown wallflowers that was easily overlooked. Nonetheless, it was vacant...ish, so in we went.

Our first attempt was abortive; our second attempt was confused, but we did make it upstairs. All the doors were curiously locked, allegedly because of people squatting in there or living in the building under otherwise quasi-legal circumstances, but I'm not sure how entirely true that was.

Nifty elevator dials in this joint though:

All the same, every interior door was locked, and we could sense that there were people behind them. We continued upstairs, to the top floor, which we knew was abandoned and accessible.

According to an issue of the Michigan Manufacturer & Financial Record, this building was erected in 1922 and designed by the firm Brown, Derrick & Preston, of which notable Detroit architect Robert O. Derrick was a partner. You may recall Derrick went on to design the famous Henry Ford Museum, and the Hannan Memorial YMCA. The journal also specifies that the financier of this building's construction was Sebastian S. Kresge, the man who founded K-Mart, as well as the philanthropic powerhouse known as the Kresge Foundation in 1924. This building went through a series of names over the years, including "Stanley Building," and "Grand River Building," before becoming the Clark Building.

Of course Kresge used space within this building, but many floors were opened to other tenants. According to an old Detroitblog entry, this building was also named the "Detroit Union League Club (DULC) Building" at some point, and the DULC occupied the top four floors while merchants tenanted the rest, he wrote. Prior to this building's construction, its footprint from 25 to 35 W. Grand River was occupied by three small storefront buildings built probably in the 1800s, of four stories each. There was a picture frame shop in one, and I see that space for "club rooms" was notated on the c.1921 Sanborn map. It stands to reason that that club might have been the DULC in their original quarters.

I can't come up with much else, thanks partially to the fact that the words "Detroit," "Union," "League," and "Club" all come up profusely in digital searches, but never all together in that order with that meaning. The Union League Club of Chicago still exists however, and their website says that they were founded in 1879 "to uphold the sacred obligations of citizenship, to promote honesty and efficiency in government, and to support cultural institutions and the beautification of the city." The Urban League Club of New York also still exists, and their website indicates that nationally, the ULC had origins in the Civil War.


Founded in 1863 by a group of concerned citizens to help preserve the Union, the Union League Club of New York has built, over ensuing years, a record of distinguished service to our country. Members of The Union League Club were instrumental in establishing The Metropolitan Museum of Art in 1870 as well as the Sanitary Commission, a predecessor organization to the American Red Cross. It helped erect the Statue of Liberty in New York Harbor and the Lincoln Monument in Union Square. Its members were instrumental in bringing down the “Boss” Tweed ring and in raising funds to outfit American soldiers in several conflicts.

The histories of the Boston and Philadelphia clubs show similar roots as well, of starting in the 1860s to promote the preservation of the Union, but of also having evolved into social / cultural clubs with philanthropic aims in the antebellum decades.

We were quick about this mission, and did our roof thing. As you can see, the Statler Hotel had just recently been demolished:

For awhile, the Clark Building sat immediately next to another, shorter vacant building whose name I cannot remember (see photo below, on right). As of 2015, I believe both buildings are now renovated and occupied.

During Super Bowl XL we got up to some shenanigans, despite all the warnings of enhanced security, and "snipers on rooftops," etc. Among other things, we heard there was going to be some kind of party at the Clark Building, so we used that as an excuse to invite ourselves up to the roof again for some night shots:

As you can see, they were still farting around on renovating the Book-Cadillac Hotel at the time:

To round things off, here's a photo of the building from around 1976 that I found in the DUCP photo collection: 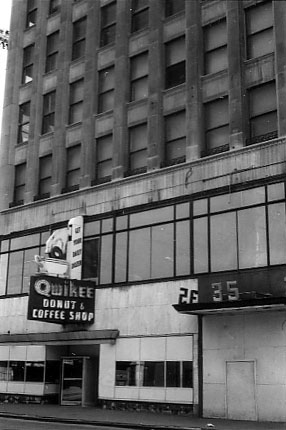