Sloop and I had decided that a week of vacation was in order. Of course I wanted to go back to the Yoopee, and especially the Keweenaw Peninsula. Our first stop was the Pictured Rocks, along the Lake Superior shore east of Munising, a popular tourist destination that I had never checked out before. 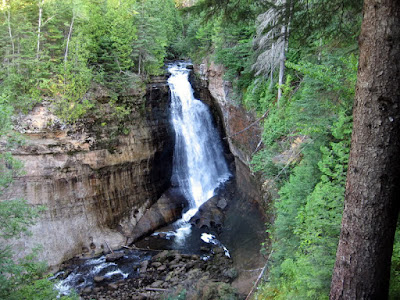 Upon arrival late in the day, we decided to hike around until we found a good spot to camp for the night. The cliffs are 300 feet high in spots, and they extend for miles and miles and miles, all the way to Grand Marais. We checked out a very small portion of the Pictured Rocks National Lakeshore. First we came upon Miner’s Falls, one of the many in the Munising area. 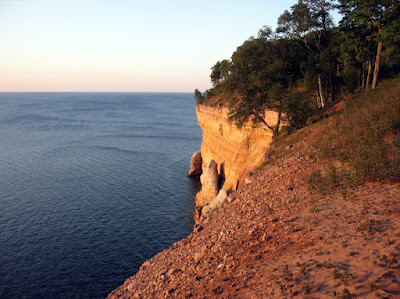 Eventually we decided on this cliff as a campsite. 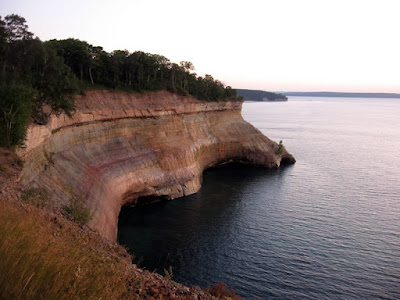 The next morning we felt brave enough to put Sloop’s canoe out on da Big Lake. Now, don't think we took this lightly. Both of us were fairly experienced canoeists, and based on the weather forecast both of us had our reservations about doing this, though at the same time we weren't going to get a very good look at the cliffs unless we were in a boat. And since we were both far too Mountain Dew-Xtreme to ride in a fuckin ferry boat, we had to do it.

These water caves and odd pockets made all kinds of clucking and gurgling noises as the water lapped their insides, creating what the Ojibwe referred to as the voice of the spirits. They had tremendous fear and respect for the lake, and with good reason. 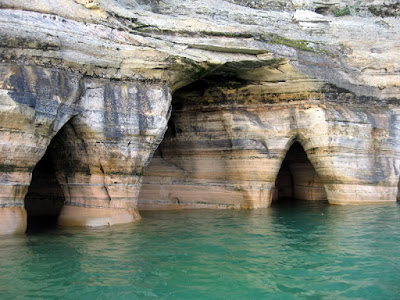 The Pictured Rocks is one of the most sacred places to the Ojibwe people, being one of the places in the story of their creation myth. We had a good time of it despite catching no fish, and having to wear myself out paddling back to shore (the land breeze that we thought was in our favor was now pushing us out to sea…). Our plan had been to camp and get up early while the water was still calm enough to canoe. By the time we made it back to shore however, the lake was beginning to chop up again. We had got out of the Ice Water Mansion just in time.

It was now time to get on our way to the main objective of our trip--the ruins of the 14 Mile Point Lighthouse, near Ontonagon. It had burned down in 1984, and was on a large tract of private land at the far western coast of the Yoopee. There were supposedly no access roads going to it anymore (they were all hopelessly overgrown). The station's name derives from the fact that it is exactly 14 miles upshore from Ontonagon, which is the only town in the area. How were we going to get to this remote, forbidding place?

The closest one can get with a vehicle is about six miles out, and from there you have to trek along the rough coastline (and hope that Lake Superior doesn’t eat you), then ford two rivers. The shoreline is rocky, and the forest butts right up to it. The tangled forest is no easier to traverse than the jagged coast itself, being completely wild and unkempt; there were no trails or footpaths through this untamed wilderness, nor had there likely ever been.

We arrived in the small town of Ontonagon in late afternoon on Tuesday and stocked up on some supplies, which included a couple pasties. We set out by way of the road, until it turned to dirt. At a certain bend we had to stop and proceed on foot to the shore, since the road would begin to lead back inland. This seemed to mesh up with what we were seeing on my fairly detailed map. That is, until we found a bran-new road being extended in this exact spot…there was construction equipment everywhere, and the smell of fresh cut trees and turned earth was heavy in the air.

Was this a new road, or was the existing path merely being widened for development? In either case, this was odious to our plans, and threw a monkey wrench in the logistics of our calculations—were we in the right spot? Was this on my map? Where the hell could we park safely if these bastards were going to be driving bulldozers and earth-movers all over the place tomorrow morning? Why the hell do people have to keep sprawling up the last pristine places of this great state with their crappy modern houses?

This only went further to buttress my c.2008 prediction that Michigan with its lifeless economy, dwindling population, and abundant natural beauty and resources was primed and ready to regentrify and become essentially America's Dubai. The sudden demand for our vast freshwater reserves might lead the ultra-rich to buy up the rights to it, probably so that they can sell drinking water to the rest of the parched country, essentially making them the next oil barons. God knows most of our elected leaders won't fight it very hard if there are kickbacks to be had. Us knuckle-dragging natives could be pushed out by spiking real estate, and the state could become nothing but a summer home paradise for the richest and most powerful Americans. Every inch of this state’s proud coastline could be subdivided and privately owned by Ted Turner-types as summer estates, complete with fences, NO TRESPASSING signs, and pretentious gated entries.


Back then [in 1917] the forest belonged to everyone, or so we felt. The whole U.P. was dotted with cabins built by men who didn’t possess a square foot of it. There were no ‘No Hunting’ or ‘No Trespassing’ signs. When Cyrus McCormick, the millionaire from Chicago, put up a steel gate across his entrance, someone shot it off its hinges, hauled it a half mile, and threw it in the river. Hunting cabins were never locked, so that anyone who needed shelter could have it, and always there was coffee and korpua [cinnamon toast] in a mouse-proof can to be freely consumed.

Apparently, the Yoopee of those days was vanishing right before our eyes—already we could see the surveyors’ stakes demarcating property lots, and some utilities were in place as well.

As we geared up to set out from where we stashed our truck, it began to downpour. After waiting out the bulk of the thunderstorm, we donned raingear and proceeded forward. We had to slog through the mud of the newly cut road for another mile before veering directly into the hummocky woods and making for the shoreline.

The rain continued, making progress miserable, though once we reached Superior’s forlorn strand we were greeted by a stout breeze and the rays of the setting sun over choppy seas. We had only about an hour of light left, so we made haste. But first we felt it wise to somehow mark this point where we emerged from the woods, so that we would know where to turn back inland on our return trip, since the trail was not evident from the beach. We stood some flat rocks in a line to form a somewhat sturdy marker that we hoped would not be washed away if a storm blew through, and then set out with speed along the strand. The going was good at first, being over a clean sand beach.

After that came a sudden change to loose, worn rocks piled against the foot of the forest, making for a much more narrow path. We followed this for some time.

As we continued northerly along this jagged shock of land between the endless forest and the wild deeps of Superior, we started to internalize the profound loneliness out here. There were no footprints in the sand, nor those of any animal; there were no boats out on the horizon, nor had we seen a plane in the sky since we left the Lower Peninsula. We were alone.

Every bend of land up ahead seemed to promise the reward of a towering, ruined lighthouse just beyond, but every outcropping we rounded merely revealed yet another even further off. Finally as light began to fail, I shouted to Sloop over the noise of the surf that we needed to find a place to sleep for the night, before it got too dark to find one.

It was getting colder and windier, and we had mere minutes before the sun dipped below the waves, and out here darkness comes on like a lead weight—almost instantly. We hadn’t seen a single damn patch of dry flat ground within the verge of the woods that was suitable to pitch a tent on (or even stand on!) in the entire time we’d been out. The trees weren’t too dense, but the ground was very uneven, being a tangled mess of fallen trees and decaying logs. Not even a wounded deer would bed down here.

As we struggled forward some more the waves picked up, and Superior’s deep roar became deafening. If I weren’t sweating from laboring under the weight of a pack and the exertion of crawling over these rocks, I’d’ve been hypothermic. Another good thing was that when we got to the two rivers we were supposed to ford, they were both so low that they were not an issue. They looked like they might only be an issue during spring thaw.

Sloop was in the lead, and I was right behind as we carefully skirted around a jagged cape where the rock face was over our heads, and being buffeted by waves. I saw one come up and suddenly both his boots were underwater as it slapped the rocks he was edging across, soaking him up to the knees. I stopped and climbed up into the woods by some tree roots. Unfortunately, the woods were no easier to traverse due to their being basically no more than a jumble of fallen logs, but it was better than getting soaked, or swept off into the surf.

As we both came up into the woods we came upon a suitable spot just big enough to put our tent, about ten feet from the edge. After propping our packs up against trees to let them dry off in the wind, we hastily rolled out the tent and set it up as fast as we could. In the fifteen minutes that that took, it was completely dark out. We got in, and though it did provide some decent shelter from the wind, it was rattling so hard from the constant gusts that I thought we’d go deaf. Nonetheless I was so tired that I was ready for bed immediately.