Wait--is this something out of upstate New York or Pennsylvania? Nah, this is in southwestern Michigan, in the old Dutch farm country not far outside Kalamazoo.

I was out innocently cruising M-60 toward Three Rivers one day in an area that I'd never been to before, when suddenly something eye-popping arrested my attention from the periphery of my vision, practically making me slam on the brakes and throw my car into a drifting tactical turn to get off the highway in time to catch it.

The architecture one can find out in the farm boonies is often quite amazing. I was passing through a tiny village by the name of Vandalia when I spotted this beauty...

Doesn't it just look like it was ripped out the Legend of Sleepy Hollow? It has a very Dutch look to it, which is not uncommon in west Michigan. My only question was, "what is it?" I thought church, for obvious reasons, but then saw the sign above the door saying "F and A.M. No. 290 Lodge," and the cross that's there looks added-on as a later afterthought.

I searched the name and came up with a list of Masonic lodges in Michigan...apparently Lodge 290 has moved to new quarters, off US-12. The lodge was chartered in 1871, but this structure at 17932 Mill St. was originally built as a Quaker meeting house in 1879, according to an article in the local paper. It was built by prominent members of the Underground Railroad so that Quakers in Vandalia wouldn’t have to travel to Prairie Grove; they were the only Quaker Anti-Slavery Society in Michigan (the question of abolition caused a divide in the Quaker society). The Masons started using this structure in 1917, but they vacated it in the 1970s when it became "infested with bees."

Did I go inside? No. It looked like it might not even have floors anymore, and let's just say the locals were...aware of my presence. Not in a bad way though; in an overly friendly way. Plus it was practically in two different people's backyards, and directly adjacent to the sardine-can-sized post office. My Kalamazoo colleague David Kohrman did manage to get inside a few years after my visit, and here is a LINK to his photo of what I missed.

After the structure lost its exempt status and Penn Township returned it to the tax roll, it was acquired by the Cass County Land Bank and torn down in November  of 2012.

Past Three Rivers, I spotted a few minor things in Cassopolis that got me to pull over. This one was downtown, possibly under renovation, and the lake is just out of sight at lower-left:

On my way out of town, I came across this, which I wandered into for a moment:

Cassopolis has distinguished itself amongst the great civilizations of human history as the hometown of both the inventor of kitty-litter, and of former Detroit Mayor Dennis Archer. I wonder if this factory was where they made Fresh Step? 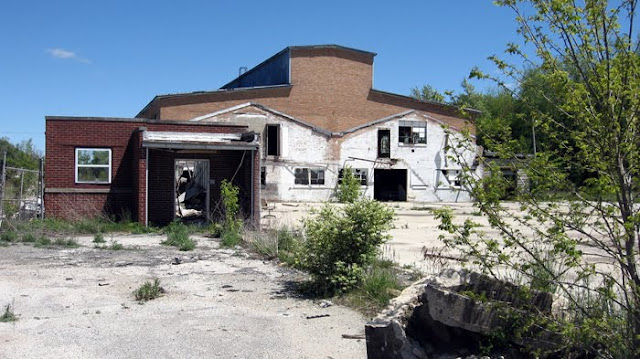 I continued through to Niles, a city in Berrien County, near the Michigan-Indiana border. I knew of an old dam there that was sitting abandoned, called the Niles Hydroelectric Light Dam.

Niles, nestled on the St. Joseph River, is unique because it has been claimed by four different nations during its long history. According to Dunbar & May's Michigan, A History of the Wolverine State, Niles was the site of Fort St. Joseph, established in 1691 by the French. The British held it after 1761, but it was captured during Pontiac's Rebellion in May 1763, by Native American warriors. The British reclaimed the fort but did not garrison it, instead continuing it in more of a trading post capacity.

Fort St. Joseph saw some action during the American Revolution. In December 1780, the post was raided by a small French party from Cahokia, who were then waylaid on their return journey by British troops. This in turn spurred retaliation from Spanish-commanded militia at St. Louis, Missouri, who then marched on Fort St. Joseph (with a few additional French) in early 1781. They took the fort and held it for a day, raising the flag of Spain over it while they looted.

Though no known official order came from Madrid, one reason that has been offered as to why the Spanish would make such a military move into Michigan is because they were plausibly concerned over threats of British encroachment into their holdings west of the Mississippi River, and that such a campaign might be mounted from Fort St. Joseph.

After the war Fort St. Joseph of course became an American holding, earning Niles the nickname, "City of Four Flags," making it the only place in Michigan to have been held by four powers. It makes five actually, if you count the Potawatomi as a legitimate race of people, ahem, even if they didn't have a pretty flag to raise.

Niles was also the birthplace of the Dodge Brothers, John and Horace, who went on to Detroit and into automotive history.

Here is a note that I saved from a webpage which I can no longer find:


Also known as the Pucker Street Dam, the Niles Hydroelectric Light Dam is actually two dams on the same site. Converted in 1891 by the Niles Electric Company from an old wooden dam made up of whole trees and mud initially built as a grist mill dam at the site. It was intended to power the Niles municipal street lights and was soon acquired by the city. A concrete dam was constructed in 1928 over the existing wooden structure.

After 1908, a larger utility company, the Indiana and Michigan Electric Co. took over most of the city of Niles' electric power needs. By 1981 the Pucker Street Dam supplied only 2% of the city's electrical needs and was used primarily during times of peak needs. At this time the dam is no longer producing electricity.

According to the HAER, the Niles Public Works took over the old Pucker Street Dam in 1895. The only extant parts of the dam that date to the original construction are portions of the exit raceway leading from the old powerhouse. I made my way to a deep overflow basin(?) next to the spillway. This one as you can see has been out of service for some time, and has filled in a bit:

I got down in it by jumping down onto some broken up car-sized chunks of concrete that were being digested by the rising foliage. I was freaked out when I landed and heard a hollow thud from below...underneath this mess was a chamber that I soon saw into by noticing a couple huge round openings, and saw that it was filled with deep water.

Glad it had not collapsed and sucked me down, I made my way to the other side of the two foot-thick wall and saw the mouth of the outlet:

This was the second time in a month that I had explored some kind of abandoned dam/spillway (stay tuned for an episode from Hines Park). I made my way toward the turbine house, hoping for some coolness.

With a hop a skip and a jump (and some painful squeezing through steel window sash while one-leggedly stretching myself across a 30ft drop to the concrete spillway below), I was in the generator room. And yeah, the generator was still in there.

It was an awesome old school affair that reminded me of the units at Henry Ford's house. Everything (while filthy) was intact, and I even found some old forms from the Niles Electric Co. for logging the dam's daily operation reports.

Underneath the generator housing was an opening where the shaft went down to the actual turbine element.

On the wall was a huge gauge that had verniers for indicating depths in the various reservoirs:

There was one more thing I saw while I was out there in southwestern Michigan, which is commonly known as the "Bellevue Ruins," in Eaton County:

I've known about them since forever, but they were so far off my usual beaten path that it was seemingly never worth the side trip. The ruins' were of what was originally called Dyer Kiln. It was one of three perpetual lime kilns that operated in the village of Bellevue from 1875 to 1899. According to the HAER, this kiln was constructed in 1875 by Thomas Roberts. The four openings at the base of the stack were used for feeding lime and probably charcoal into the furnace. The adjoining portion you can see that no longer has a roof was probably used for storing coal.

This decrepit structure is all that remains of them. The cement business still seems to thrive on some scale in this town, as far as I could see. According to the Michigan DNR's Geological Survey Division, Dyer Kiln "is distinguished by having manufactured lime for the production of the mortar used in construction of the State Capitol," which was built from 1872-1878.

Today, it is a windswept ruin of sun-bleached limestone in the middle of southern Michigan farm country. The only thing telling its story is a broken wooden sign. A roof structure has been added to cap the top of the chimney, to protect it from water damage.

For more exploration of Eaton County's ruins, see: Hittin' The Bricks
References:
Lower Peninsula of Michigan, An Inventory of Historic Engineering and Industrial Sites, HAER (1976)
Michigan, A History of the Wolverine State, by Willis Dunbar & George May
http://www.leaderpub.com/2012/11/08/vandalia-landmark-lost/
https://www.flickr.com/photos/statlerhotel/5766576820/in/album-72157626710581151/