Everyone loves lighthouses. I don't think there's a type of building (aside from barns) that has been the subject of more paintings and postcards than the lighthouse. Romantic icon, stalwart bastion, blah, blah, blah. There are even sects of people in Michigan whose hobby/calling it is to visit every lighthouse in the state.

Michigan has more of them than any other state in the US, and a higher concentration of them than most countries in the world. There's well over a hundred, and many of them are off-limits to the public. At time of writing there were about 20 of them closed or derelict, and the Saginaw River Rear Range Light was one of them, having been built in 1876 and abandoned in 1971 (MAP). The only legal way to view it when I visited in 2005 was to sail a boat up a narrow inlet off the Saginaw River and stare at it from the water.

The description in A Traveler's Guide to 116 Michigan Lighthouses told me that it was in the middle of a large tract of private land owned by Dow Chemical, which looked difficult to access on foot. using aerial imagery and a regular map that actually showed the approximate location of the light, I set out in search of it, hoping to at least get one picture of the lighthouse in the distance. 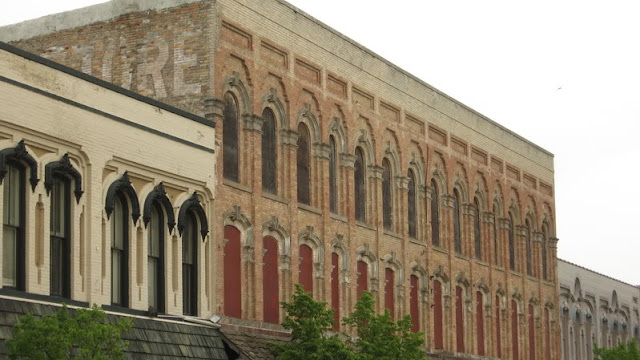 I spent a couple hours scouting around in Bay City proper, and found several prime buildings just ripe for the exploring. I got into the hulking, well-known ruin of the Industrial Works, right on the curving Saginaw River. The closed Pere Marquette Railroad's Bay City Depot was about to be remodeled actually, and today is back open as a tourism office: 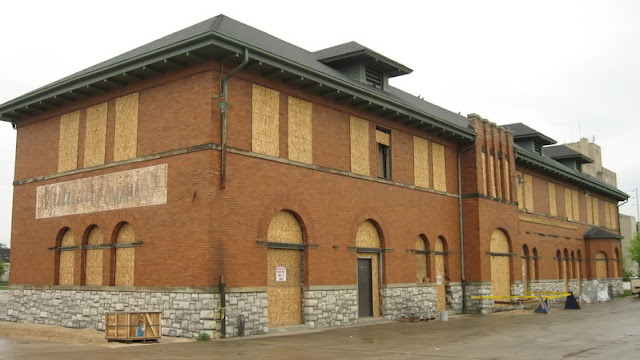 Architecturally this is a beautiful city. Back in its lumber boom days, Bay City contained a seedy entertainment district known as “Hell’s Half Mile,” a row of brothels and other scummy businesses that catered to the carnal needs of the loggers. What I didn’t know yet was that these were all connected below street level by a network of hallways and tunnels known as the “catacombs,” which kept much of their unsightly traffic in private.

Some of these “catacombs” still exist beneath Bay City today, and though they have lain hidden for a century, portions of them along Water Street were uncovered recently during construction of new condos there. These secret storefronts, saloons, and passages were covered back up again, because the cost of restoring them was deemed “too expensive.” 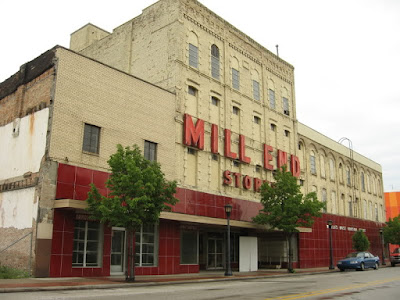 I wandered away from downtown for awhile, then eventually a mile off in the distance saw a pure white structure across a field that was surely my target. But separating it from my grasp was an imposing 10-foot perimeter fence, marking the boundary of the Dow Chemical Company's property. Most of it was wetland, and left in a somewhat natural state, anyway. I sighed, but did not completely lose heart yet. I figured I might be able to circle around to the north and get closer perhaps.

Once past the fence and in the woods, I hiked about a half-mile and came to a creek lined with tall reeds. It ran all the way into the interior of the property, and across it I could see the white tower of the lighthouse peering above the fenland taunting me, and yet seductively calling me to it.

I was safely out of view here near the shoreline, so I didn’t want to risk going inland close to the Dow buildings to cross this creek. I spotted some cut up log rounds nearby, and thought tossing them in the river to make stepping stones might help me across. With a heavy grunt, I lifted and heaved the first one in but it floated away, so that idea was a bust. Too bad I didn't have the lumberjack log-riding skills. After some serious wading through the thick reeds, I found a bridge of sorts...it had two ends, but no middle; it was probably a flood-control gate. Only a pair of wobbly metal poles ran between the two sides.

After some nervous consideration and extremely unrecommendable behavior, I made it to the other side, and immediately began looking for an easy way through the dense bog growth separating me from the lighthouse. There wasn’t one, so I would have to trudge headlong through the soggy marsh. Good thing I was wearing my "serious" boots. At last I emerged on the other side of the thick reeds, and I knew that I was on the home stretch. 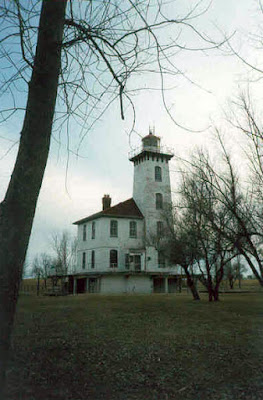 I waited and watched, scoping the scene before moving in for the kill. All seemed to be clear, and there was still a great distance between my position and the nearest sign of civilization. The tower appeared well-sealed, but it looked like electric power was cut. 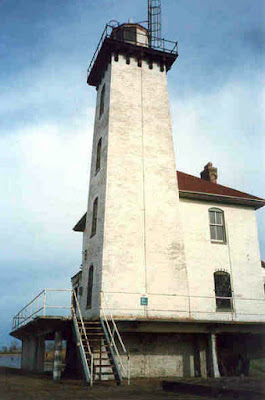 According to one article from 2003 by Dave Rogers, it was a 15-year-old Bay City boy who devised the world's first range light system back in the 1800s, by hoisting lanterns on planks at the mouth of the Saginaw River here. The modern version of this system is still used today, worldwide. I have however read other sources indicating the idea had been in use elsewhere since 1763; perhaps what Rogers meant was that it was the first range-light system used in the Great Lakes?

The concept behind range lights is that mariners can use the relative positions of at least two known beacons to safely align their vessels in narrow navigational channels. The first official Saginaw River Light was erected in 1831 when the logging boom era of Michigan was getting underway and lumber was beginning to move in great quantities out of the Saginaw Valley. 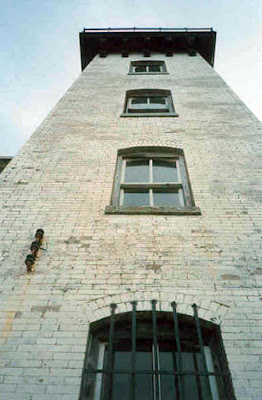 The architectural design for this c.1876 lighthouse as you might have guessed by now is unique from all other lighthouses, though many are often built off of the same patterns. The architect was Major Godfrey Weitzel of the Army Corps of Engineers, and unlike other lighthouses, this station's tower stairs also serve as the only means of getting between the two floors and basement of the keeper's residence.

I quickly, cautiously closed the distance from my cover to the protective eaves of the lighthouse's “crib,” snapping pictures along the way. It wasn’t actually a crib, but sorta felt like one; except I could walk around in spaces underneath it. It had been an actual crib when the station was first built and this area was still a natural wetland, but it was later rebuilt and these areas beneath it served as boat storage space. The open doorway here did not lead into the structure above: 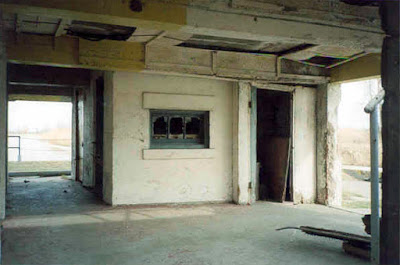 There was random junk wood strewn about, and a couple steel doors, all of which were padlocked. A staircase led up onto the skirt around the main level. I circled the outside several times, checking all the doors and windows, but they were seriously sealed—not only with boards, but bars on top of the boards. 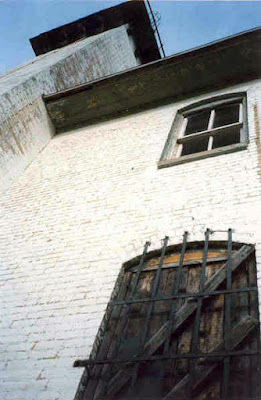 I began to despair of getting in, and even convinced myself that I could at least take pride in the fact that I had gotten up to it. The only possible way in was through the second-story windows. It was quite a strain and I scraped my elbows a bit in the process, but I hauled myself at last onto the steeply pitched lower-roof.

From there I was able to get within reaching-distance of a window on the second floor and see if it was open. It was, and I was in like Flynn. 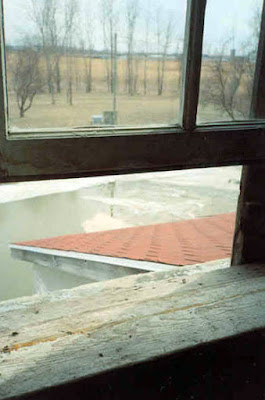 Crawling into the window meant I had to stretch across a 10-foot drop to the crib, but I managed to pour myself in without mishap. I looked around and saw that the place had been totally stripped down to bare walls, but it was clean and in good shape—a perfect candidate for restoration. 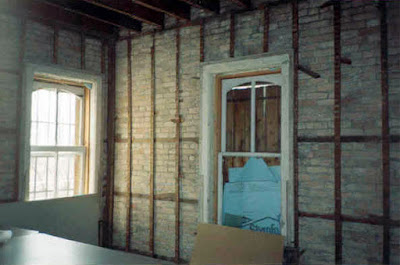 The floorplan was predictably tiny, and in the corner of the room was the arched entryway to the tower stairs.

The first keeper of the Saginaw River Range Lights was a woman named Julia Brawn-Way, and she moved into this station with her son and husband, George Way, after lighting it in September, 1876. In 1877 George was promoted to keeper, and Julia demoted to assistant keeper. In 1882 the assistant's position for this station was eliminated, and George was made keeper of both lights. When George Way died in February of 1883, Julia disappeared from the Lighthouse Service. 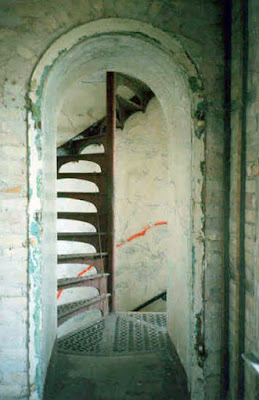 The steps were the typical ornate wrought iron, spiraling elegantly up the tower.

The Great Lakes Lighthouses Encyclopedia notes that the building is said to be haunted, most likely by a later keeper named Peter Brawn who it suggests died in this structure, with instructions telling his family to "keep 'his' light burning," and to keep a "never-ending watch over it." One can't help but notice that Julia Brawn-Way seems to have somehow accumulated a couple rather familiar surnames...making for a somewhat interesting unexplained facet of the story. 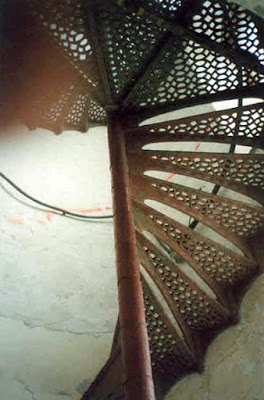 The hauntings here began to be reported starting in 1939 when the Coast Guard took over the U.S. Lighthouse Service; they mostly amounted to hearing loud footsteps going up and down the tower stairs.

This range light became obsolete in 1962 when the Corps re-dredged the Saginaw River again to accommodate longer ships, and its positioning was no longer relevant to the navigational channel. The Coast Guard ceased their use of it in 1980. 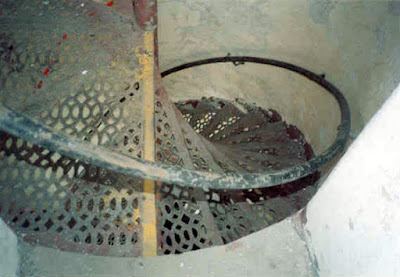 By looking at the doorways, you can see the thickness of the tower walls. I went down a floor to check out the main level first. 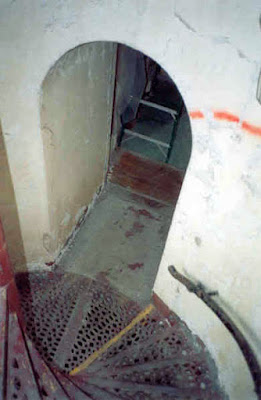 Likewise, nothing much left to see but stripped walls. Going down yet again, I found the basement level, and was immediately plunged into a body of much colder air. Now, a ghost-hunter at this point would start spouting gibberish about "feeling presences" and so forth, but we all know cold air sinks, and in abandoned buildings that are sealed from sunlight, the air inside is always several degrees cooler than outside. Especially when the walls are several feet thick. 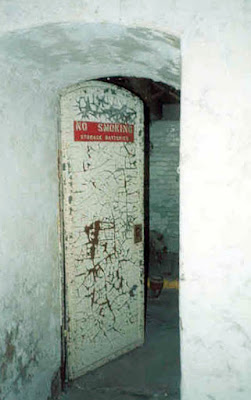 The heavy, steel-riveted door at the bottom led into the battery room. 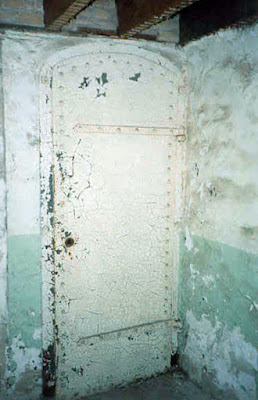 The batteries were long gone, and some lawn mowers chilled-out in their place, explaining the strangely well-groomed grounds immediately around the outside of the tower. On the side of the building facing the water was a large sign with info about helping to preserve this lighthouse.

Now I went all the way up the tower to the lantern room, but sadly found that its element and fourth-order Fresnel lens had been removed too. Since this was my first time in a lantern room since I was a young kid I was amazed at how small the space was—it seemed there wasn’t even enough room for a light, let alone a normal sized man to tend it. 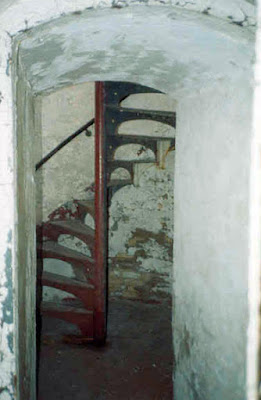 I noticed a strange plethora of flies buzzing around in the glass-walled room, reminding me of something out of Amityville Horror. I turned the heavy iron latch to the outer door and crawled through it out onto the catwalk encircling the lantern room. It was essentially six stories above the ground, and I could see a fair distance. 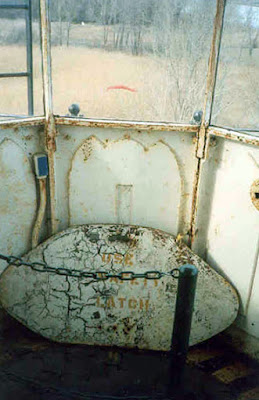 After savoring the moment for a nice long while, I moved back inside and vacated the premises after re-securing the building. 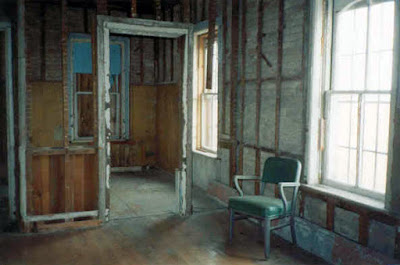 At time of writing in 2014, I believe that the Saginaw River Marine Historical Society must be nearing completion of their restoration, though to my knowledge they have still only opened the light to the public on a couple special occasions since acquiring it from Dow Chemical in 2002.