Early next morning I headed from Redridge back into Houghton and had breakfast at the Suomi Bakery, to get my usual panukakku and nisu toast. From there I went further north to Calumet, to scope that magical place one more time.

Coppo Block on the left, Mineral Range Depot on the right: 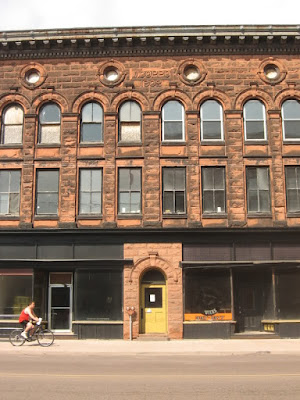 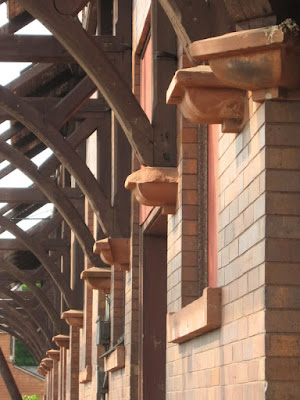 Many of the old Calumet & Hecla Mine buildings had been kept around and preserved for various uses: 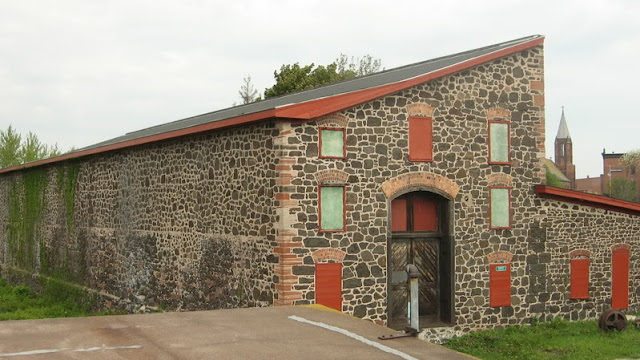 Calumet & Hecla was the company that put Calumet, Michigan on the map; there were around 20 mine shafts operating in this town at one time, more than any other single location in Michigan. 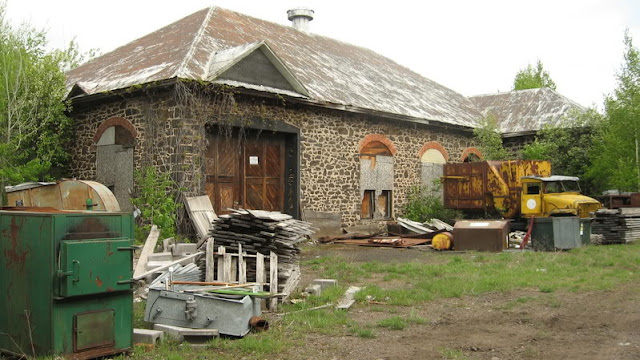 It was also the site of the famous Red Jacket Shaft, for a long time the world's deepest. The old buildings in this particular spot were clustered around the Calumet & Hecla Mine #2 shaft. 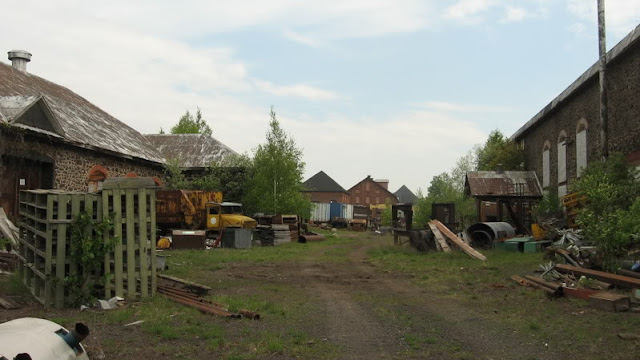 The shafts are all capped and covered up now, but the infinite labyrinths still exist below. 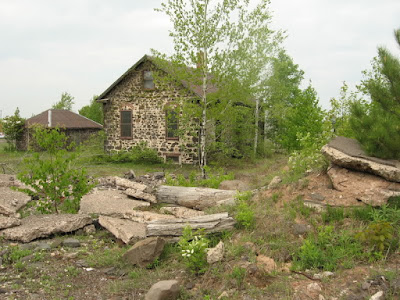 I don't remember which were which, but these structures were undoubtedly blacksmith shops, machine shops, dry houses and engine houses, etc., for the C & H mines' support operations. 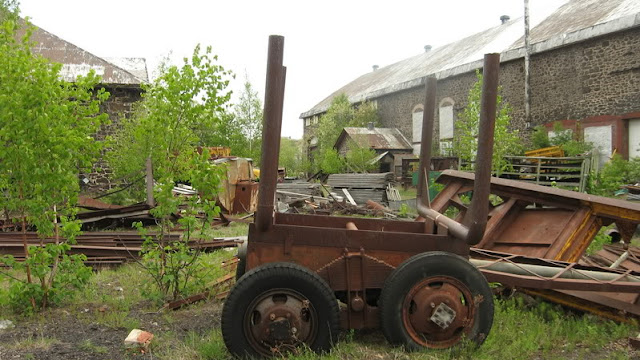 There were about seven potential targets around Torch Lake that I wanted to hit on the way back south. Some I couldn't find, or were on private land, but most paid off. Calumet & Hecla Stamp Mill at Lake Linden however was a limited success, as only flat bare foundations remained: 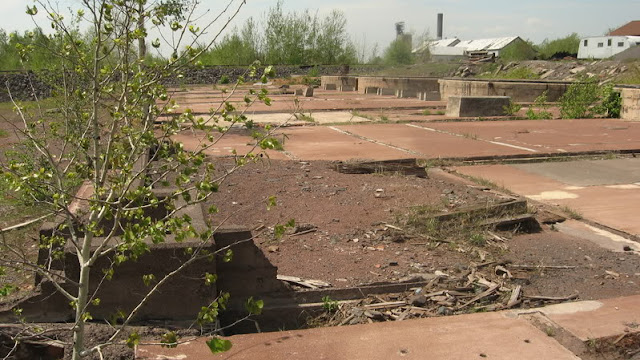 The large raggedy-looking buildings of the Calumet & Hecla Smelter at Hubbell looked tempting as well, but entry was a questionable proposition: 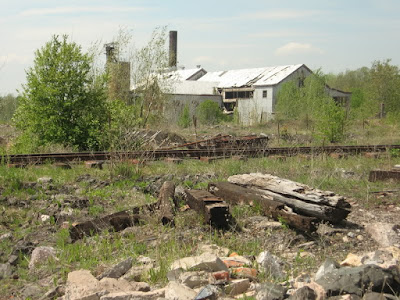 It was at these two mighty sites that all the ore brought up from the mines beneath the city of Calumet was refined and smelted, and the fortunes of the region were transmuted into capital wealth. Between C & H and Quincy, they represented the two biggest and richest mining companies in the Copper Country. In fact C & H was once the richest mining company in the world. They are synonymous with Michigan copper.

Not far down M-26, I came to Tamarack City, and the enormous concrete foundations of the Ahmeek Stamp Mill:

Their sheer size alone inspires one to contemplate that mythical, once-glorious Michiganian industrial might of yore. Their titanic aspect just seems to suggest that they were built to withstand whatever unthinkably brutal pounding must have gone on here; of beating boulders into gravel, as if the god Vulcan himself were swinging his hammer to free the copper from the rock, preparing it for the fire.

The truth is that the Ahmeek Stamp is the last remaining steam-powered stamp in the Copper Country. The tall, rusty metal appendage seen on the left is what remains of its Nordberg Compound Stamp.

This is one of the most awe-inspiring ruins in the Copper Country--even all of Michigan. Its towering size, and just the way it has apparently been brutally smashed into gigantic chunks speaks to what must have been an unimaginable violence of force.

Each of these monoliths is about the size of a four-story building:

Now, just another row of tombstones...

The Ahmeek Mining Co. had four of these great stamps in operation in 1910, and added another four in 1914. Their mines lay considerably north of here, by Allouez and Copper City. I explored the Ahmeek Mine #1 and #2 in a different post.

One looks upon these ruins and imagines the terrible noise and shaking of the earth that must have accompanied their operation. Especially with so many houses of Tamarack City sitting just across the street, it seems it would be like enduring a constant earthquake to live there. The compound-expansion engines driving the stamps were capable of landing 104 blows per minute from a height of 24 inches, according to Lawrence Molloy's book. With eight of these behemoth mills going full tilt during WWI, that must have produced quite a roar. Each mill had the capacity to process 7,000lbs of ore in a day.

Though this might be the only place anywhere that one can see a Nordberg Stamp in its original position, one more of this mill's stamps was saved from the scrap heap, but it resides in a museum in Colorado.

Slightly further down M-26 from Tamarack on the way to Dollar Bay, the ruins of the Quincy Stamp Mill #1 also stand out. It was started in 1888 with three stamps, to replace an older one on Portage Lake. It was further upgraded in 1892 with the addition of two more stamps.

Another mill a couple hundred yards into the woods north of here, the Quincy Stamp Mill #2, was added along the same rail spur in 1900. I did not know it was there, or I would have looked for it.

It was odd to see reinforced concrete mill structures here like the automotive plants I was used to seeing back home, but I guess they did sometimes build things in Copper Country out of something other than stone. This site was so busy processing the huge Quincy Mine's ore that it kept adding buildings all the way into the 1920s.

Looking uphill, I could see the piled stone of the railroad grade that dumped raw ore into the top of the mill. Again, remember that stamp mills worked by gravity, in a downhill direction:

I could see another taller building off into the woods uphill a little way. It was the turbine building, built in 1921:

The Quincy Mine's stamp mill tailings spewed out into Torch Lake for generations, refining the ore that was brought down from the hills. Once that constant mighty stream of copper started to show signs of drying up, the company began to look for ways to keep revenue flowing, one of which was re-mining tailings that had been discarded as waste in their early days before the milling process was as thorough.

Many of those tailings still had copper left in them that could be rendered using more advanced modern chemical-extraction methods. They came up with the idea of basically a giant vacuum cleaner on a boat to suck up the tailings from the lake bottom and shoot them in slurry form through a pipeline back to shore and into the Quincy Reclamation plant. Sorta like an alcoholic on hands and knees, desperately sucking spilled booze from the carpeting.

Most of the other major stamp mills on Torch Lake (Tamarack, Ahmeek, C & H, Osceola) followed suit and began re-refining their own tailings as well. These operations had all completely ceased by 1970 however, and the western banks of Torch Lake were left quiet again, a graveyard row of silent decaying mills, their toxic tailings marring the shoreline and poisoning its waters. Michigan's Copper Empire had finally come to an end.

This is Quincy's Reclamation Dredge #2, which I also explored in a separate post:

I began the long trek back home. I stopped again near the town of Christmas to see the Bay Furnace, another old iron smelter on Lake Superior whose ruins have been stabilized and converted into a state park. Yes, there is a town named Christmas in the Yoopee. One of the most popular places in the world from which to mail a postcard. 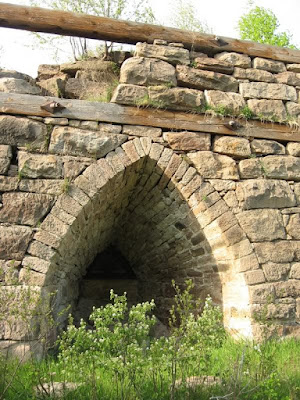 According to Karthyn Bishop Eckert's Sandstone Architecture of the Lake Superior Region, the Bay Furnace Co. built a furnace near Onota in 1869-70 using rock quarried from the nearby Powell's Point quarry, and two sets of charcoal kilns, each set two and a half miles away from the furnace, so as to take advantage of the surrounding stands of hardwood timber available for fuel. Ships carried iron ore from Marquette to be fired here into pig iron before being reloaded for the rest of the trip down to the steel mills of the lower lakes. Bay Furnace operated with 800 men until June 1877 when it burned down. Its peak production was in 1874, making 8,359 tons of pig iron.

I also made one more stop in Munising to check out the town's many waterfalls: 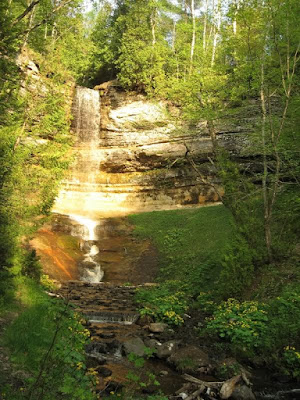 That one is the aptly-named Munising Falls. Little did I know at the time, the ruins of the old Schoolcraft Blast Furnace sat near the trail to the falls.