Up Grand River Avenue, out on Detroit's northwest side near Brightmoor, sits the empty Detroit Police 16th Precinct Station. 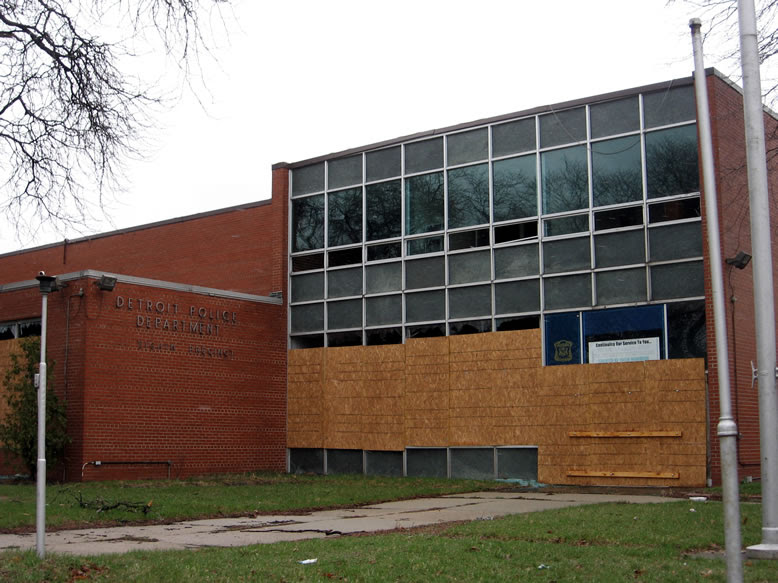 It opened on November 1st, 1955 according to a poster on the DetroitYes forum, who claimed to have been a cadet there when it opened. He said, "All the old timers had put in transfers to the 'new' station, resulting with guys having to have 10 or 12 years to work a car. The rest walked beats."

The 16th became the 8th Precinct in 1984 when the original 8th at Grand River & Alexandrine closed down its iconic "fairy-tale castle" building, which is well over a century old. That station sat abandoned and decayed for years (but is now renovated), and as more and more people fled Detroit, the DPD closed or consolidated more precincts. 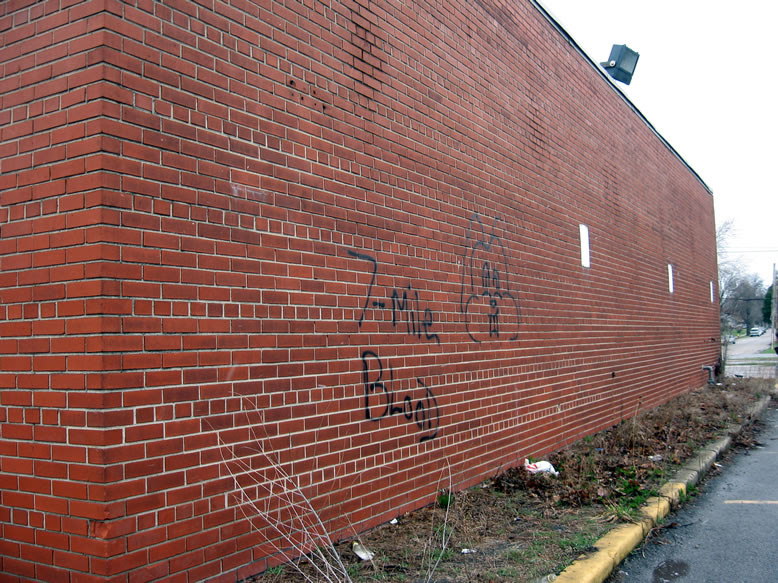 This building was finally closed in 2005, though apparently the officers who used to run out of this station still hold get-togethers. The 8th Precinct has been consolidated with the former 6th Precinct, in the "Northwestern District" Station on Warwick Street.

Brightmoor has had a reputation as one of the worst parts of Detroit, starting right from the inception when it was annexed in 1926; most of the housing was cheap one-room shacks, and there wasn't much for building codes...it was a boondocks right from the start. By the time the 1980s rolled around, it was falling apart and drug crime was rampant. 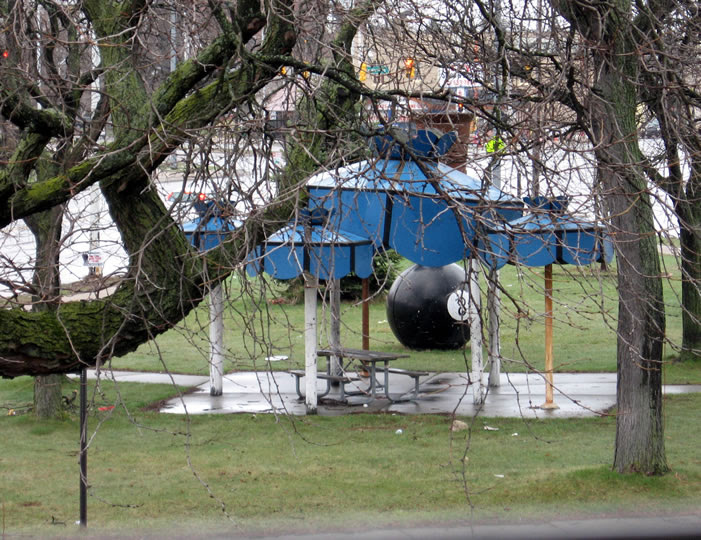 In fact, "Blightmoor" is allegedly where crack cocaine debuted to the American market. Which makes the 8-ball sculpture in the park out front of the precinct really ironic...I mean, a huge 8-ball with a psychedelic horn sticking out of it sitting in the middle of a ghetto...? Tell me there's not a drug reference there.

So, as can be imagined, this cop shop saw a lot of action in those days, and I'm sure that talking with some of the officers who had this beat (or with some of the suspects who were locked up here) would reveal an endless trove of war stories and tales of the savageries that were committed behind these walls as Brightmoor spiraled into the ninth level of Hell. Detroit Police are not known for their gentle demeanor, to put it succinctly. I can vouch for this firsthand. 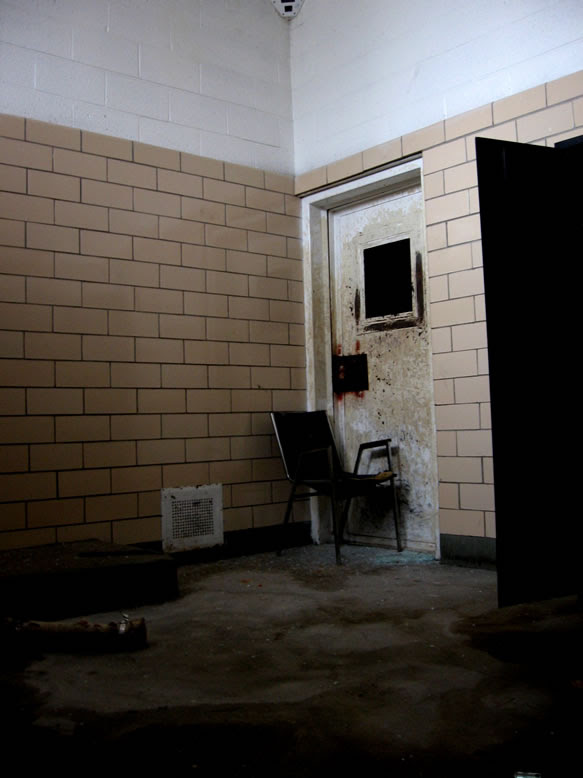 The 16th Precinct however also covered neighborhoods in the Rouge Park area that were extremely stable, one of which was referred to as "Copper Valley," on account of the fact that so many policemen and firemen lived there. They preferred this outskirt area because up until recently it was mandatory that they live in the city, and in the 1970s and 1980s most of Detroit's "bad areas" (that is, black areas) were within the confines of Grand Boulevard.

Since most policemen and firemen could not afford to live in the fancy areas like Palmer Woods, they settled in this affordable area on the edge of the stable (white) western suburbs, where they could still be in compliance with the residency regulations. Today, Copper Valley too has begun to succumb to the blight that affects the rest of the inner city, as the wave of destruction burns outwards like a growing forest fire. 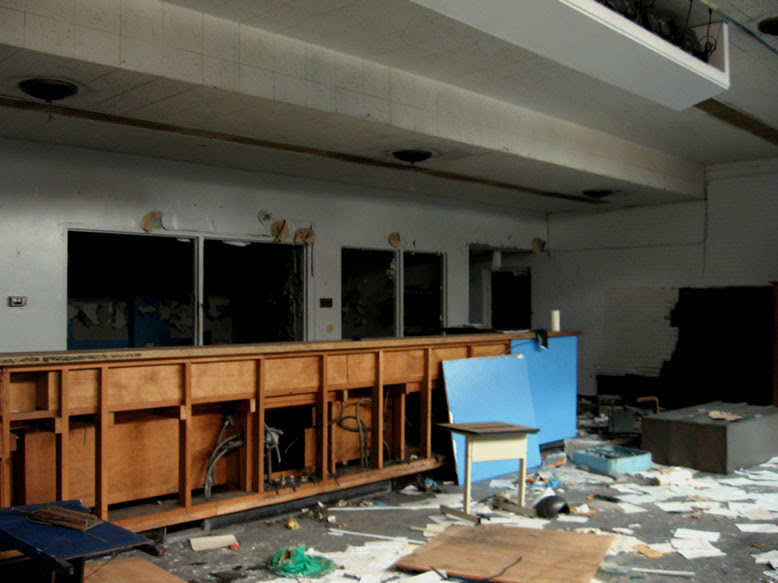 The 16th sits on a sharp triangular piece of land jutting out into the intersection of Grand River & McNichols (which is actually more like Riverdale or Old Redford, but it's close enough to Brightmoor for our purposes).

Across the street was the abandoned (now demolished) Redford High School: 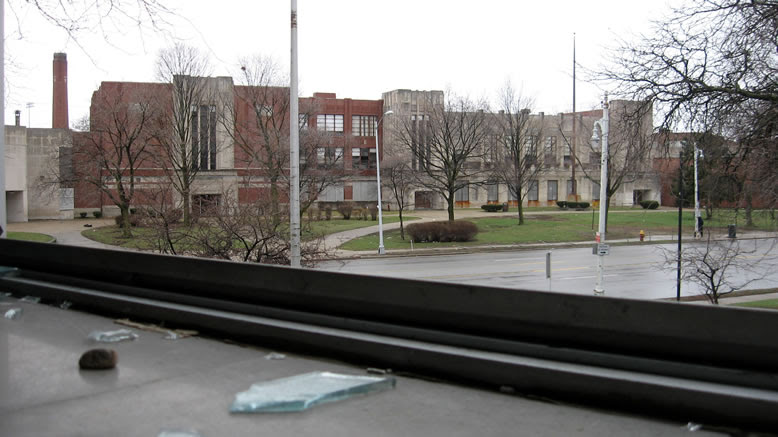 Some of my friends actually have quite a bit of personal history tied up in this part of Detroit. Chad was born and lived in Brightmoor, my great-grandmother lived in a house on Kentfield, Syd grew up on Argus, and our buddy Smokey Topaz grew up in the Redford area. 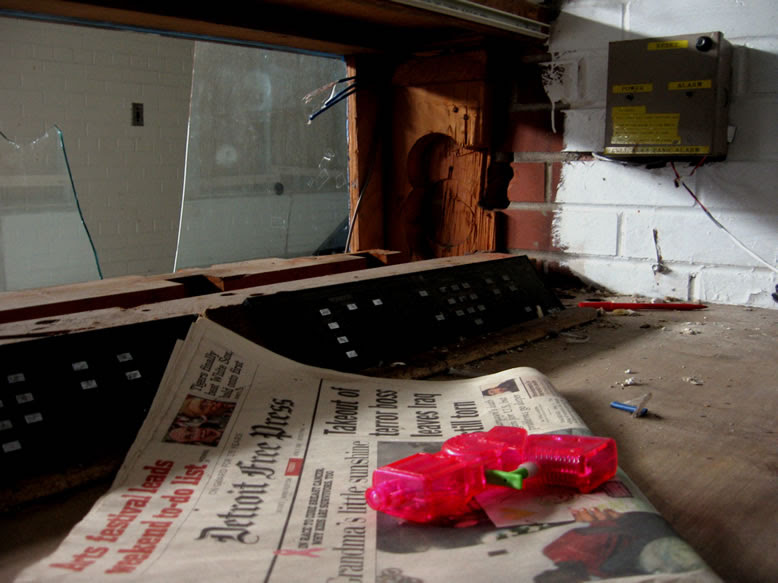 When I was there the lockers and jail cells were still intact and had not been stolen yet, as the scrappers were probably still working on the copper and hadn't gotten to the less valuable steel yet: 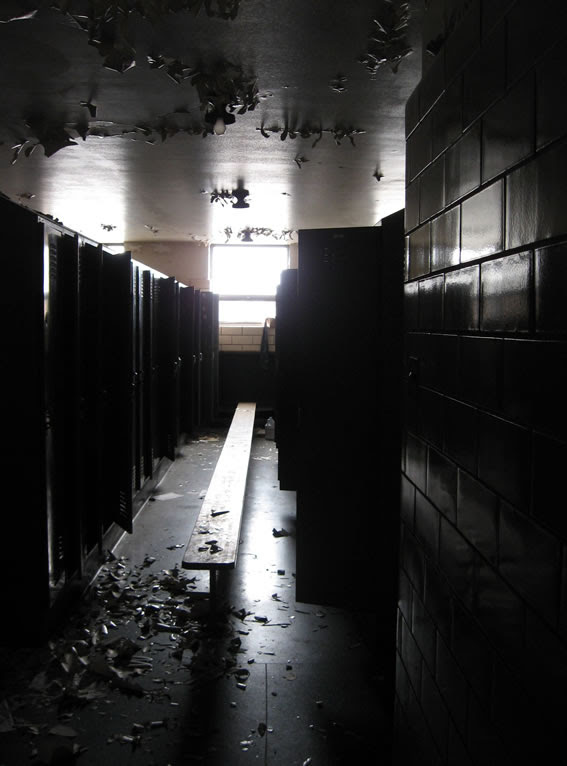 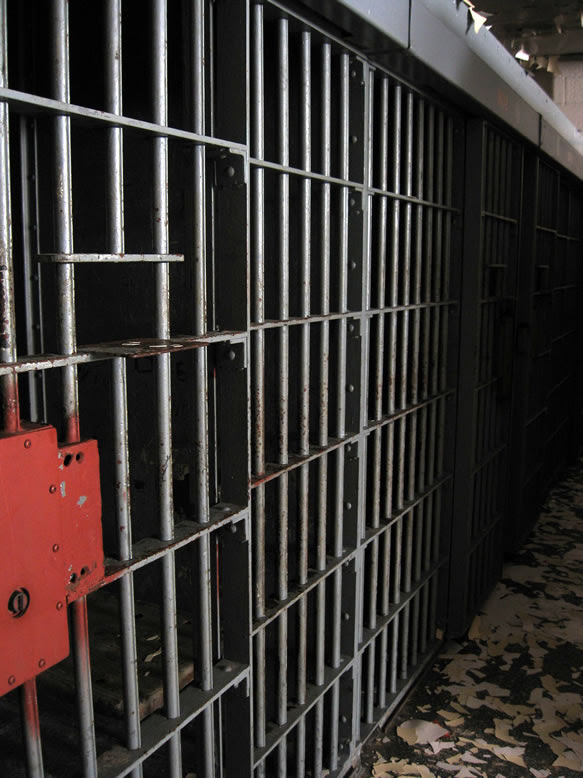 Busting into a vacant cop shop--essentially going behind enemy lines, so to speak--can be a slightly more nerve-wracking mission than usual, but I have never had any issues yet. 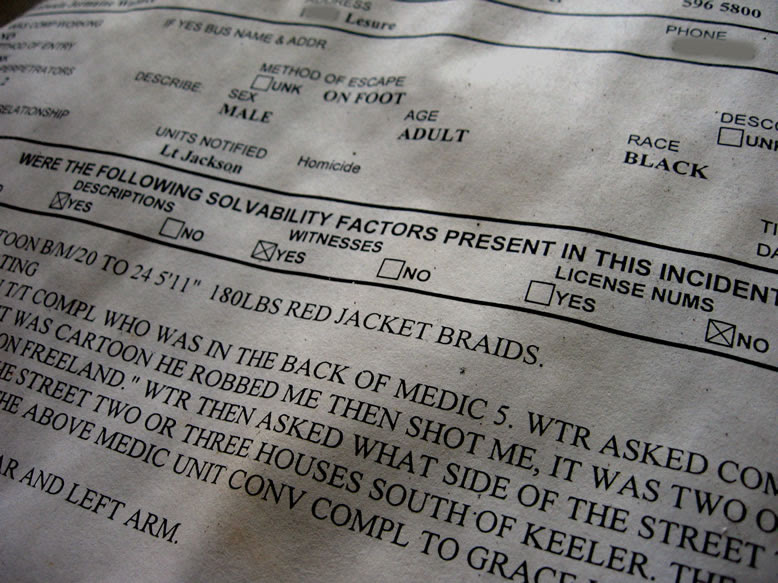 There was a lot of loose paperwork detailing shootings, and witness accounts of drive-bys, etc., but I didn't find any of the crazy stuff like riot helmets and used murder weapons that I saw in the Highland Park Police Station. Then again, the basement was totally flooded and inaccessible, which is where the pistol range was, and probably the evidence lockers too. 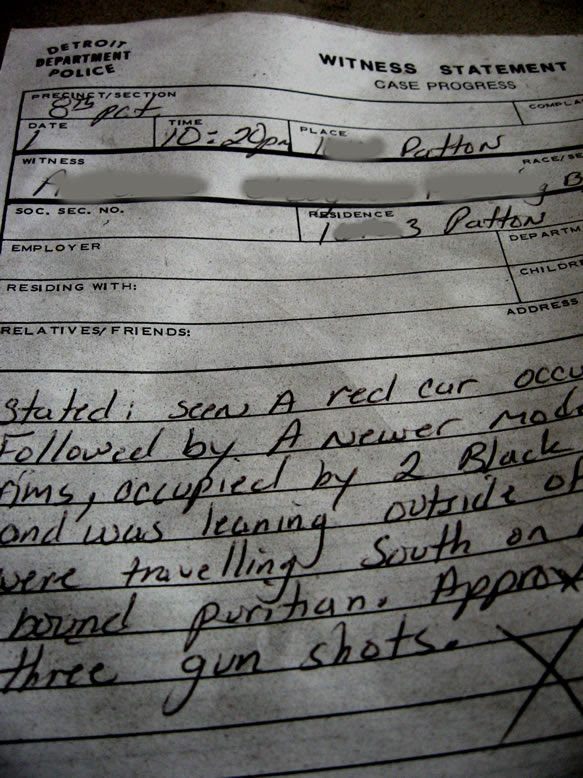 And in fact it looked like the scrappers, such as had gotten in, were already using the building's blueprints to more efficiently dismantle it, or so I surmised, by the fact that they were spread out on the front desk. 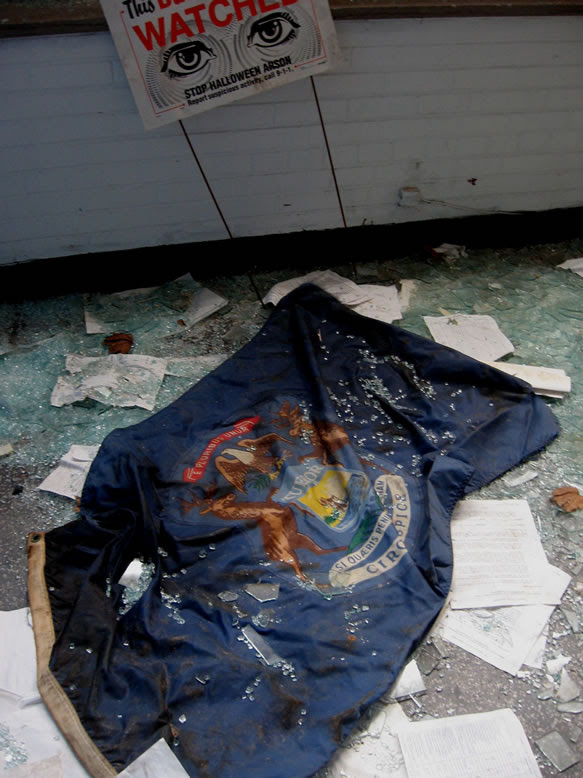 As usual there was a pistol holster hidden under the front desk, attached with drywall screws, so that there was always a loaded piece on hand. Notice there is no bullet-proof glass in here: 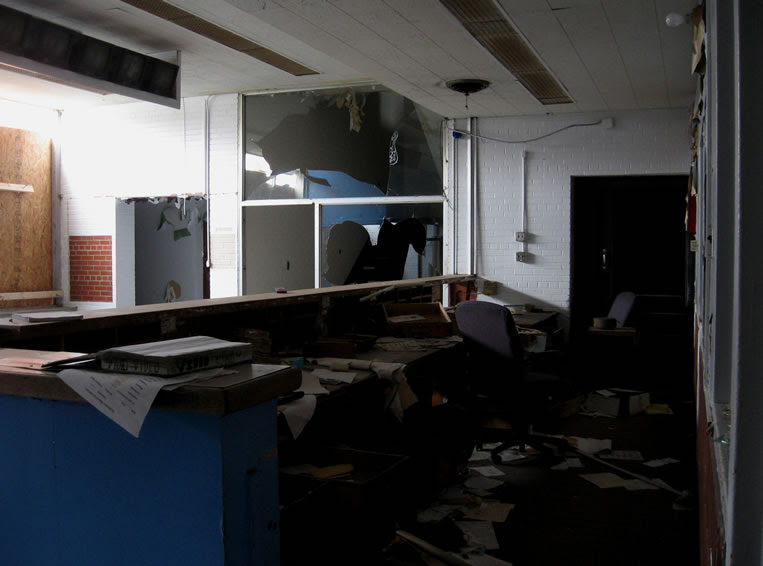 This is the last thing you'd see before going into the clink and having to eat ketchup sammiches for the weekend: 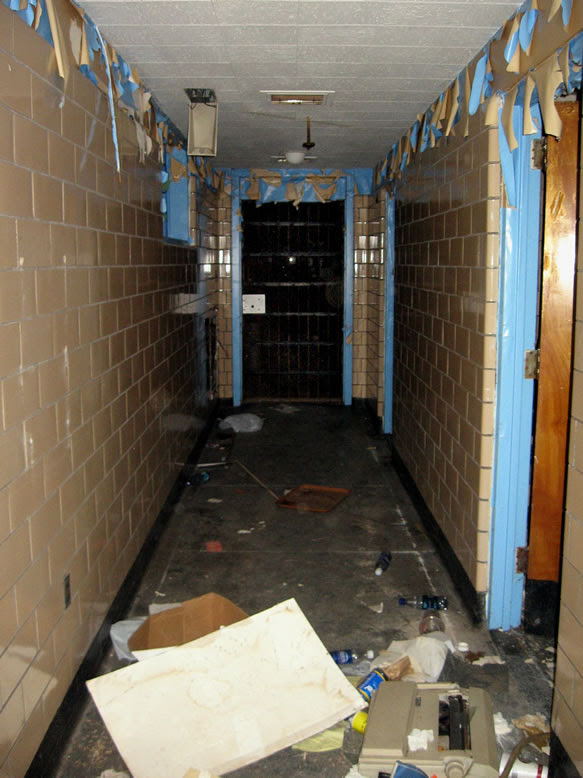 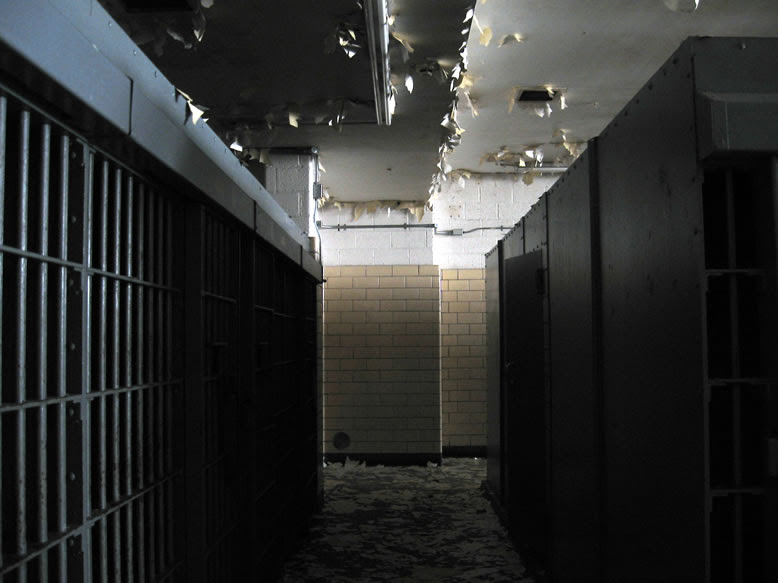 Mural in the garage: 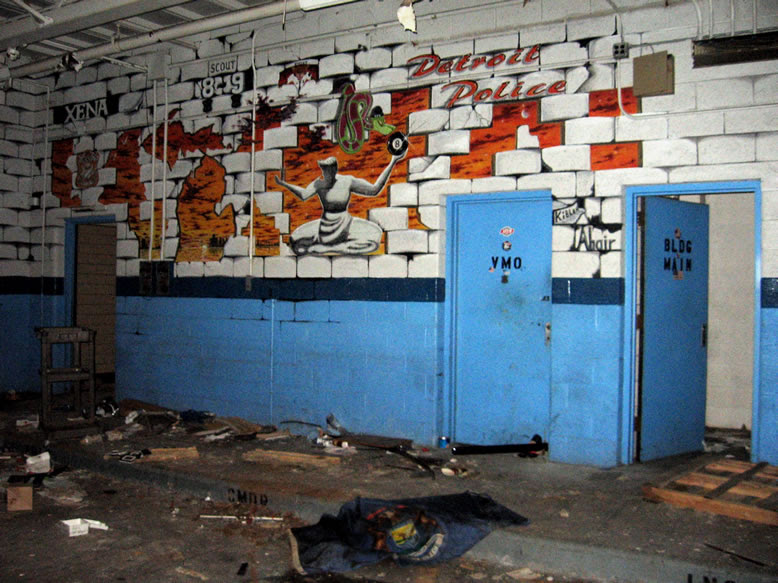 The old 16th Precinct house quickly fell into much more ragged condition than you see in these pictures; we got in before the wave of vandalism and scrapping occurred. 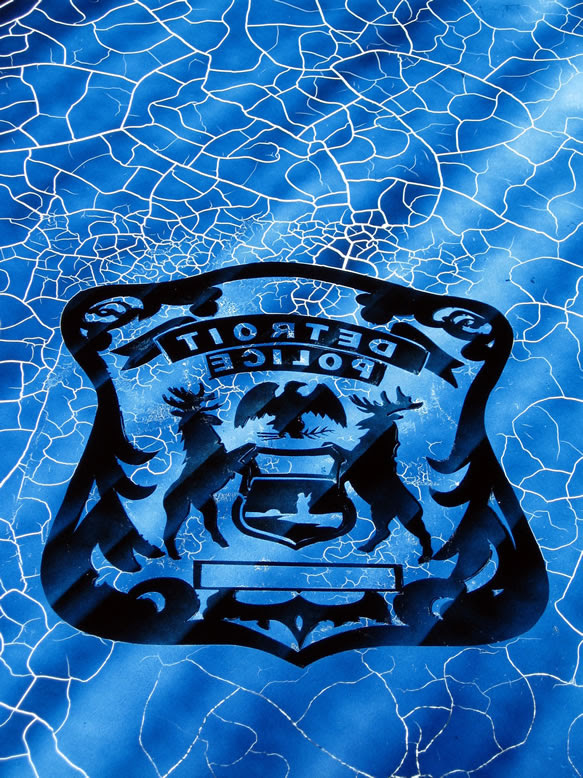 In October of 2014 the building was demolished, despite a fairly involved cleanup workday coordinated by 320 volunteers in 2013, in hopes of reopening the old building. They wanted it to reopen as a police station again, because as the founder of Blight Busters said, "the police officers were the 'heart of this community' and since the station closed, crime has increased."

At least one good thing came about--the people in charge of the restoration of the old 6th Precinct came in before demolition and salvaged some of the jail cells and waded into the basement to save other "DPD relics" before the building fell.