Everything was perfect—preparation had been meticulous, no contingency was left unstudied. The explorers had their camera gear and backpacks loaded and checked, spare batteries charged, combat boots laced up. They even wore their urban camo pants, just in case.

Now was the moment of truth—the one they had been training for. As they stealthily stalked their prey in the darkened alley, they knew there could be only victory; everything had been planned out. All that was left was to execute the strike. They felt their pulses rise as they furtively checked to make sure the scene on the street was quiet and conducive to the illicit act they were about to commit, but they stayed cool and calculating while striding around the corner toward their target. 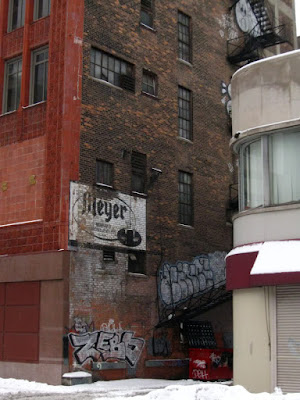 Yet despite the appearance that they were operating  undetected, another hunter had already been watching their every move, and was coldly deciding when to execute his own covert attack. As the team of explorers nervously took one last look around to make sure they were unseen, the hunter prepared to unleash what would surely be a fatal shot. Cocked and ready, he held them in his sights, waiting for the would-be urban ninjas below his perch to reach for the door handle of the abandoned skyscraper, before loosing his silent, lethal wrath.

The cold, snowy streets of the once mighty metropolis were completely still, devoid of people or sound on this night, as lifeless as a frozen ice forest of the north...the perfect setting for the suspenseful deed that was about to shatter its peaceful slumber.

The warm, black-gloved fingertips reached out in complete confidence that they were a mere instant from successfully completing their mission. As they made contact with the cold, unforgiving steel of the darkened building's front door, the shot rang out—impacting with a deafening burst like the crack of a rifle directly over the heads of the stunned and scrambling adventurers, who with unspeakable terror now realized that it was they who were the quarry on this hunt, as they listened to the report still echoing off of the rows of buildings for blocks and blocks.

From their inadequate hiding places they now looked out, blinking, to find the source of the mighty whistling snowball that had grazed their heads and sprayed them with icy shrapnel, scanning the entire street with stark confusion and disbelief. They looked up to the rooftops and windows, but saw no sign of he who had loosed this mighty thunderbolt; the sharpshooter had already dissolved back into the shadows.

John and I were ducked behind the cornice of the rooftop where we had set up our sniper's nest, beer almost coming out our noses from the uncontrollable laughter we were trying to stifle. Slowly we regained enough composure to peek back up above the roofline to see what our prey was doing now—they were scurrying back down the street where they had come from so quickly that they were almost tripping over each other. Ah, good times. 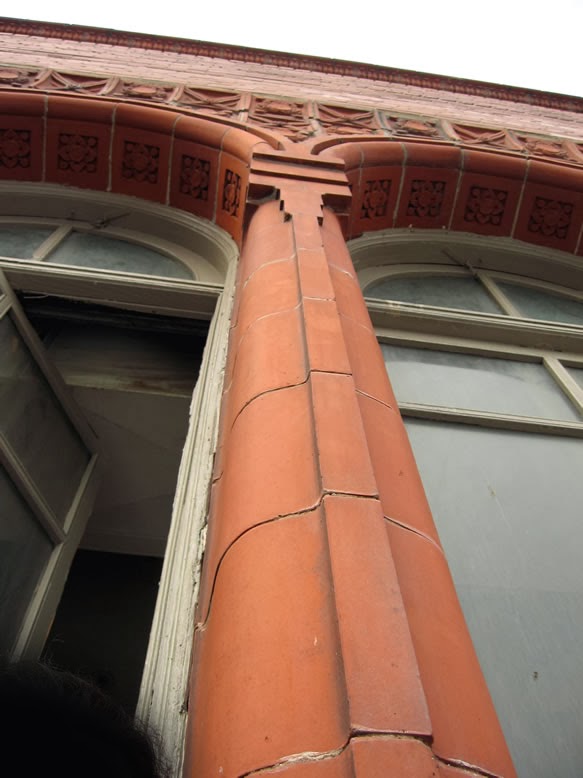 This is how John began his own elegantly comedic take on what happened that night in 2007 when we cracked into the T.B. Rayl Building, on Detroitblog:

I could sum up this story with the mad scramble from the burglar alarm while wearing a woman’s wig. Or the part where the burly weirdo who’d watched us get in the building stood outside and menacingly stared straight up at us for what seemed like forever. Or the snowballs that somehow fell from our roof upon some hapless urban explorers trying to get into nearby buildings by casually tugging on storefront doors along Woodward. But first, to rescue this from being nothing more than a drunken escapade story, I’ll start with some background.

The fact is, one of the things we debated on the roof that night while drinking beer (and randomly sniping at other trespassers) was why and how the act of sneaking into abandoned buildings downtown was starting to eclipse baseball as the national pastime in these parts, and what would come of this sudden change. I may have even snorted that the very existence of John's Detroitblog and shimmering write-ups such as his were what made the sport so enticing, and was spreading the word far and wide across the suburbs as a call to action for every wannabe with a Flickr account and a flashlight...

...And we probably would have agreed that that was a distinct likelihood, but at the same time it would have been incredibly vain of us to pretend that it was the sole reason, or that no one else besides us had the ability to conceive of becoming "urban explorers" without written instructions, or that it was something that should be pretentiously left to "the professionals" (or, likewise, insinuating that we were in fact those professionals). To analyze it this deeply always brings into focus the unavoidable absurdity and hypocrisy that lies at the core of "urban exploration," a term that I only ever use within quotation marks, as if to handle it with rubber gloves.

But this was something we debated often, actually, as well as whether we were being snobs about it—if for no other reason than it was an entertaining, if purely academic question. And it was one big reason I never had a website of my own, until now, long after the cat has already left the bag. Perhaps I am nonetheless still succumbing to the whims of my own ego by posting this, and by having this website, but I like to think that my main goal—that of inspiring more people to seek a deeper understanding of our local history, as opposed to treating Detroit like a mere playground—outweighs any egotistical concerns.

But the fact is—and I apologize to whomever that was on the receiving end of our snowballs—it was just simply god damned hilarious. I mean, I don't think I've ever laughed harder in my life. So rather than rehash too much of what John wrote about the building's history, I'll show you a few pretty pictures. The building does definitely have some nice views, and as he pointed out, it is an overlooked architectural treasure unto itself.

The Rayl Building was built in 1915, for the T.B. Rayl Co.'s hardware store. Later the building was occupied by furriers, a drug store, and a jeweler. Most recently, the only tenant was a wig shop on the first floor.

Obviously we wanted to avoid tripping their burglar alarm, so we naturally utilized the fire escape to get to the upper floors first. In this case it was hanging down far enough to where a determined jump would allow you to grab and lower it for your own luxurious use—much more enjoyable than the extravagant feat of acrobatics necessary to access, say, the Farwell Building's fire escape.

Here is a tasty compressed view of the Elliott Building across the street, and the Bamlet Building over in Capitol Park, both of which we had been in before...

...as well as a closeup of the lionheads on the Valpey Building. There were quite a few nice refreshing views of architectural details here previously unavailable to us.

One of the things I really love getting out of a new rooftop is the new ways in which I can crunch the city's buildings together into one shot with a zoom lens that would be impossible otherwise. For instance, here is a shot combining the L.B. King & Co. Building, Harvard Square Centre, Police Headquarters, and that goofy Mies van der Rohe apartment tower off in the distance on the lower east side:

You would never be able to duplicate this view of the city or this combination of buildings anywhere except in that precise spot where I was standing when I took that shot. Moreover, the Greektown Casino Hotel now blocks that view.

More overlooked buildings of Bricktown, and some modern ones near Campus Martius:

We also had a nice view of some of our next targets, the Fowler and Traver Buildings:

Of course because of the cold outside, the steam outlet behind the building blotted out much of the rest of our views:

The Broderick Tower, Wurlitzer Building, and Metropolitan Building, the taller members of the "Skyscraper Graveyard," still reared their ugly heads above the downtown steam however:

Needless to say our first visit was during the daytime, and it was the second visit during the night hours that resulted in our accidentally tripping the motion detector in the wig shop. I suppose I could post my photo of John garishly festooned in the blonde woman's wig, seconds before that fateful moment wherein the deafening alarm was tripped, and the ensuing scramble that followed as we tried to abandon ship before the police arrived. But but I am not that evil, heheh.