Our trek back from 14 Mile Point Lighthouse was not as grueling as the trek out, but we sweat just as much. We changed clothes and saddled up Sloop's truck for the drive to Copper Country. On our way back out of Ontonagon we spied a big old building, with a cupola and the words "EAT LIGHT WITH BEEF" painted on the side of it.

It turns out this was the Ontonagon County Poorhouse. It was sitting in the middle of an active beef farm with some other discarded detritus. We snuck in quickly and poked around.

The building was divided into male and female halves, and reportedly had 19 rooms. Supposedly the foundation of an old sanatorium sits nearby, but I don't remember noticing it.

According to the book Strange Michigan, a man had once committed suicide here in 1893 by setting fire to the poorhouse barn with himself inside. This particular structure was built in 1900 however, so I am guessing that's urban legend, or a typo; by 1940 it was sold off to the Laitala family who lived in it while dairy farming on the land.

They ceased farming in the 1960s, and Sylvia Laitala went on to open the popular Syl's Cafe in Ontonagon, incidentally the same place we had bought the pasties we ate on our hike yesterday. Both buildings are still in the family today.

The poor building looked like it had suffered a stroke. I mean, look at the depression in this room…the piano is ready to roll down into the bowl:

My other main objective for this trip was to get back into the Keweenaw Peninsula and spend some serious time getting into some more of the mining ruins of the copper range. To do some real hunting and detective work, as I have learned about through CopperCountryExplorer. I have always loved the allegorical picture that he painted of a "Red Metal Empire," and imagined it ruled from below the earth by an ancient king whose mute, cobwebbed skeleton still sits in a now dusty throne room, immersed in the eternal blackness of the underground...


It’s the tale of a lost civilization, a forsaken empire that once reigned over the scenic shores of the Keweenaw Peninsula. It was an empire ruled by the red metal king – copper. In no other place in the world did it occur in such purity and abundance. Its discovery led to one of the great colonizations of the modern age, transforming the remote and rugged wilderness of the Keweenaw Peninsula to a sprawling industrial metropolis of over 100,000 people.

What resulted was a shining oasis in a vast and remote wilderness. Opulent buildings of sandstone and marble lined streets paved with bricks where streetcars mingled with both horses and motorcars. Excursion trains took patrons to manicured parks on high bluffs, or amusement parks along white sand beaches. Three story department stores offered the latest in Paris fashion, and grand Opera houses showcased the theater’s best and brightest. Nearby the industrial machine employed thousands while providing staffed schools, stocked libraries, and modern hospitals.

It was not to last however. After over a century of rule, the empire would gasp its last breath. The mines closed, the people left, and the metropolis returned to the wilderness from which it had come. In its place would be only ruins, the crumbling remains of the dreams and hopes of thousands. The Copper Country had become yet another victim to the labored demise of an industrialized nation.

It is these shadows of a lost empire – the ruins and remains scattered across the Keweenaw peninsula – that captures my camera and my imagination. As progress lumbers on, these ruins move closer to extinction. With them die the stories of the men, women, and children that served the red metal king with their sweat and blood.

It was that same austere king to whom the ancient ancestors of the Ojibwa people gave tribute when they first chipped pure copper from the cliff faces of this land thousands of years ago, before trading it to the far corners of the globe.

I had studied Mike's site long and intently for a few years by this point, and had picked up many hints and skills in the unique art of discovering and exploring mining ruins of the Keweenaw. For instance, I know that ruins are as a rule generally sprinkled in a line along the northeast-southwest running lode, and the first thing you should always look for is the poor-rock pile, which is just a huge hill of “non-ore-containing” rock that is refuse from a mine. Once you find that, one should find the ruins of the rock house and the collar house immediately nearby, and if you draw an imaginary line through them, you’ll eventually come to the hoist, which is usually recognizable by the fact that its foundation is in the shape of a huge “H” on the ground. Then of course the headframe and shafthouse will be the next in line, and the rest of the structures should be in the immediate vicinity. Or their ruins, at least. 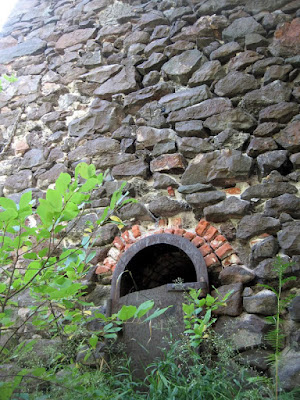 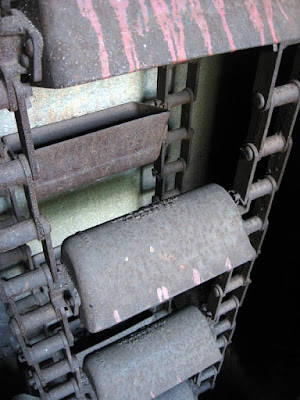 Well, these nice little rules work great on paper—or if you know what the #$%^ you’re doing—but if you’re a complete tyro like me out on unfamiliar terrain, toss in some extremely dense forest cover and underbrush, and you’ll quickly see that laboratory formulas go to shit out in the field as fast as you can say “Which way is north?”

Although I did in fact equip myself with a compass to resolve this exact question, we still had some difficulty in a few situations. As it turns out, I became quite frustrated with myself, and a bit embarrassed. I experienced a newfound respect for the people who do this up there. Not only can they find these ruins, but they can identify them to specific functions of each building, and era of construction/operation. 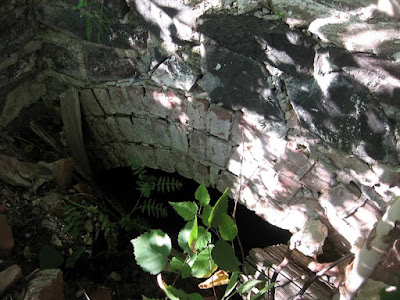 And given a little more time to research, they can differentiate between different mine sites in a cluster of several, and delineate which structures belonged to which company, and even which sites among those belonged to the corresponding numbered shafts—even when most of the traces are gone, or no more than a pile of rubble in a clump of underbrush remains. A rusty shorn-off bolt, a completely faded sign nailed to a tree, or a withered piece of 40-year-old shoe leather to them is a vital clue, one which can speak volumes if attached to the proper insight or train of research. 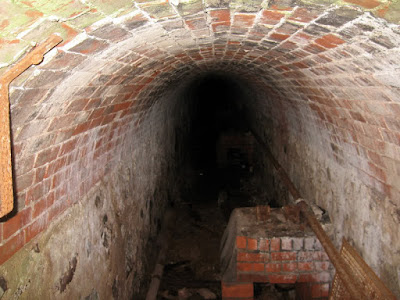 These photos are actually from two sites within the Quincy Mine's empire near Hancock.  The tunnel is from the site of the old powerhouse near the old Quincy Coal Dock, across from the ruins of Quincy Stamp Mill #1. Elsewhere I have a much more detailed post concerning the might Quincy Mine site in another post. 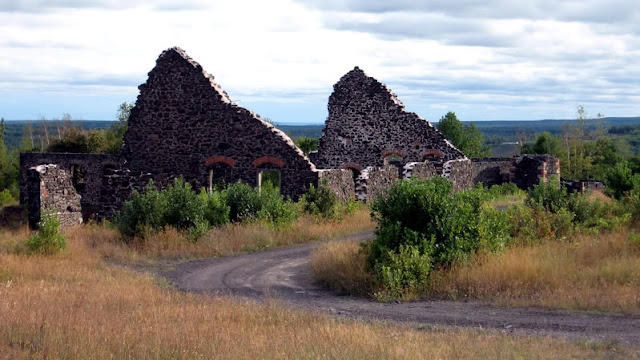 This last photo is from the Quincy Mine #4.

Luckily, finding the general areas of these mine locations is quite easy. Often as easy as driving down “Mine Location Road,” or stopping when you see a sign that says “DANGER MINESHAFT” The villages these mines are in routinely share the same name as the mine because they were built around it, and are tiny. So that also works in one’s favor. But it will not help you at all when you’re whacking through dense bush, or trying to decide if following one of these umpteen former-railroad-grades-turned-snowmobile-trail is a good (i.e., productive) idea. Or when you come to the fourth fork in a road that you thought had only one.

So when we got to the village of Kearsarge, the site of what I thought to be some pretty dense ruins fields, I was not too worried, and told Sloop to pick a road and drive down it until we saw cool stuff. From the pics I had seen of North Kearsarge’s ruins, we would be hard pressed to fuck it up; it seemed to be fairly overflowing with picturesque remains. We went to the nearest poor-rock pile, climbed it, and looked around. Nothing. 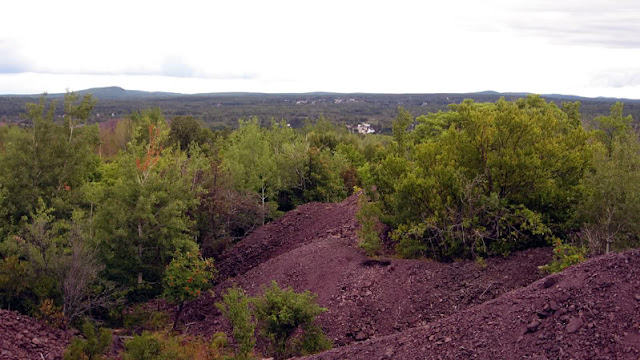 WTF? So we started tromping around in the woods along one of the dirt roads. We found a couple measly piles of ruin. I was beginning to question my competence as an explorer. Finally after 45 minutes at least, we began to get on the right trail. 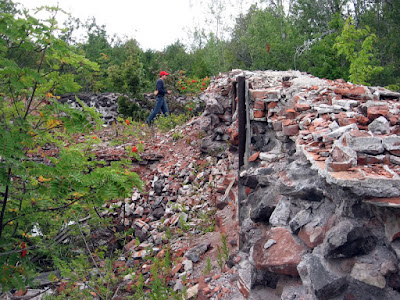 I kept checking my compass just to make sure we were following a logical course. Most of what we were seeing was just walls and foundations (made of poor rock, naturally). I could’ve sworn there were some actual structures left behind at North Kearsarge…some fairly dramatic stuff. There were actually two shafts here, the #1 and #2, and I wasn’t sure which we were in the midst of, or if we had even drifted into one of the other adjacent mines, such as the Wolverine or South Kearsarge. 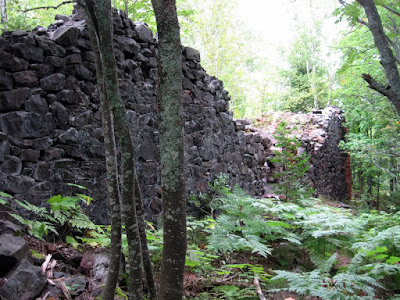 We did come across some pretty cool stuff, like this old rail viaduct… 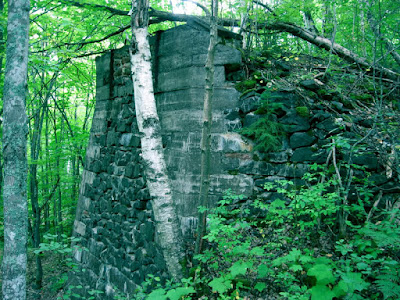 Soon we saw ruins sprawling through the woods: 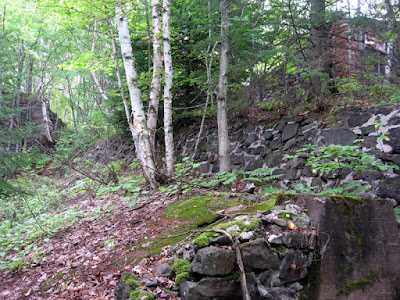 And whatever building this was… 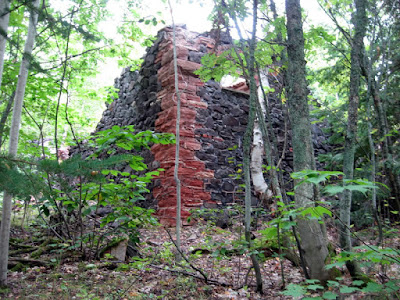 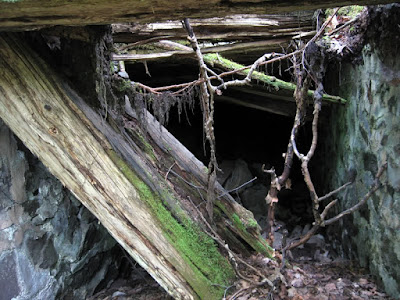 This was the base to a smokestack: 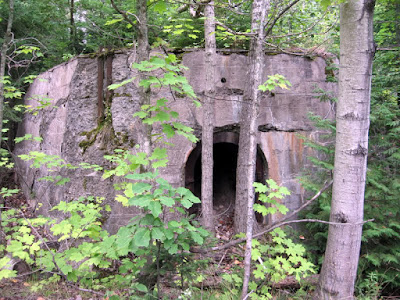 Eventually it seemed that we had pretty much tapped this place, as much as it pained me to think it. We could’ve wandered off and tried again along some of the other forks we had passed, but I thought it might be easier to give the next one a go, namely Mohawk.

Mohawk had three locations that should be impossible to miss, sprawled out right next to each other along the road to Gay, plus three more locations strung out north and south of town. We couldn’t go wrong. According to the small jpeg-map that I had saved of the Mohawk sites, they were all practically on top of each other; and from what I remembered it was just as fecund as Kearsarge, if not more so.