It began innocently enough, as a leisurely stroll through the hall of the former asylum’s main building where numerous historical artifacts were on display in glass cases...but we ended up roofing the place. 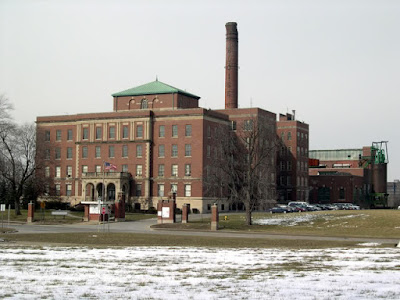 Eloise Asylum was established in 1839 as the Wayne County Poorhouse and Farm, and through the years became a county-operated hospital, sanatorium, and asylum—eventually Michigan’s largest medical complex. It had its own fire department, train station, and postal code.

The asylum was situated along the "Old Sauk Trail," or "Old Chicago Road," known better today as Michigan Avenue, or US-12. The road sits atop the oldest continuously used pathway in North America, having started out as a migratory path for nomadic hunter-gatherers 11,000 years ago when the glaciers began to melt. The trail served as a path for traveling between what is now Lake Erie and Lake Michigan, and by the mid-1800s was turned into a stagecoach road between the wilderness villages that became Detroit and Chicago. Eloise was placed out here in the country along this ancient road because it was away from the city, and yet still accessible by coach. 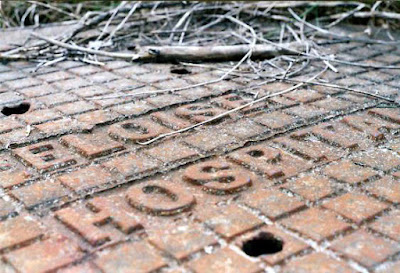 Eloise's most important contribution to history was it's use of X-ray technology; it was among the first, if not the first hospital in the United States to utilize X-rays for medical diagnosis, according to a 2002 book by Patricia Ibbotson. In December of 1896, Stanislas Keenan constructed an X-ray machine that was then used at the County House dispensary. Other doctors and hospitals in the area soon began referring cases to Eloise for X-ray analysis.

Eloise was also part of an experiment at Ypsilanti State Hospital to find an influenza vaccine for the U.S. Army during WWII, conducted by Dr Jonas Salk, the famous inventor of the polio vaccine. 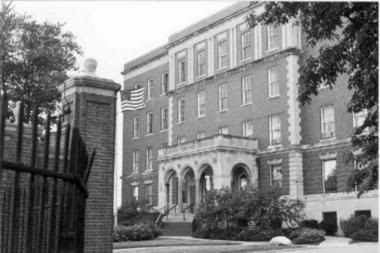 In fact the 1946 British film Genius In An Asylum was at least partially filmed at Eloise, about a once-promising pianist named Horace Flinders who "became utterly insane." Included is footage and audio of Superintendent T.K. Gruber explaining how the healing power of music became a part of the therapy program at Eloise.

Actor George Peppard, known for his role as Hannibal on the TV show "A-Team," also likely performed at Eloise's auditorium in the 1940s, according to evidence presented on the blog Portraits Of Eloise.

Connecting the myriad outbuildings were steam tunnels from the powerhouse, topped by the infamous landmark "ELOISE" smokestack, which was demolished in 2006. By 1984, about 95% of the asylum’s buildings had been leveled in favor of a golf course, and the Wayne County Sheriff’s Department nextdoor. Those that remained were the bakery, fire house, powerhouse, and the main administrative building, recently nicknamed the Kay Beard Building. The c.1905 bakery, and c.1924 powerhouse: 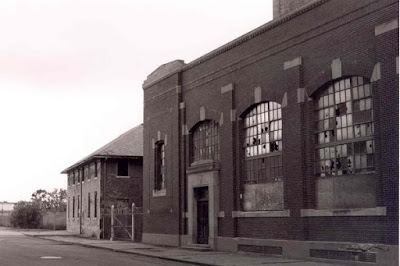 The Eloise Fire Department, which was actually the old "County House Power Laundry," built in 1895, and currently the oldest standing structure left on the campus: 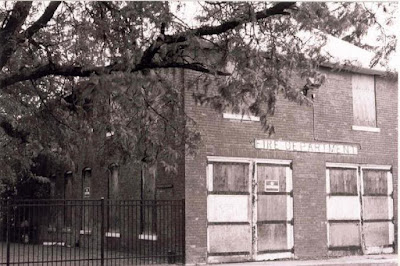 A couple years later I made a quick once-over of the place but did not find much of interest other than an antique sewing-machine. The upstairs had rooms for the firemen, and a hole in the floor where the brass pole had been. No ghosts.

The Kay Beard Building was the only one still in use, and only on the first two floors, for oddball county offices like the Office of Nutrition. 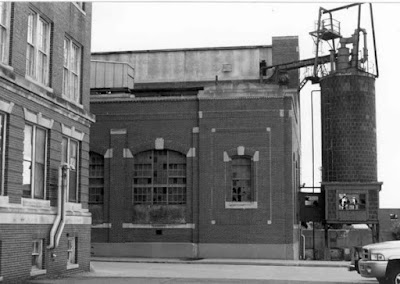 Throughout the late ‘70s and early ‘80s, Eloise Asylum was abandoned and rotting just like the old “Northville Tunnels,” becoming just as infested with vandals, and "Satanists." As a kid I always knew of the place's reputation when it was operating, through my mother’s grim, whispered stories every time we drove by it, but I never had the opportunity to see the inside. Neither had anyone else in the past 20 years due to the security guard and the close proximity of the sheriff's office. But for no cost at all, anyone could go into the Kay Beard and see the makeshift “museum,” providing one signed in at the front desk, and did not leave the main hallway.

We had been idly shuffling about in the main hall looking at the display cases for about 20 minutes, when we noticed the guard from the front desk walk by us, leaving his post unoccupied. He had not returned for some time when it dawned on Chisel, ever the ballsy one, that we should take advantage of this opportunity. He tried the doorknob to the stairwell, and it opened. He and his girlfriend went up, and came back five minutes later, saying that access was open to every floor including the basement! And the guard still had not returned. 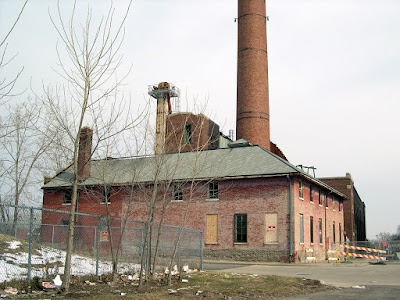 We were understandably a little hesitant; that guard had taken one look at our shifty asses and specifically said, “Do not go on any floors except this one.” It is lost on almost no one that old Eloise is a bright blip on most stoner kids’ radars, especially security guards who work there. Such a place naturally inspires curiosity. Chisel went back into the stairs and disappeared for another 10 minutes.

When they re-emerged, they said they had been to the basement looking for tunnel entrances. They didn’t find any, but wanted to check again. This was our last chance, Chisel said…the guard was still gone, and we’d likely never get a better opportunity to explore the infamous Eloise. We followed them into the stairwell. 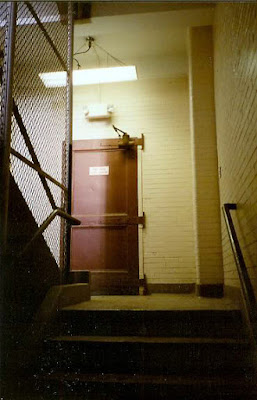 Silently we tiptoed up past the second floor where we could see and hear people walking by in the offices, and went to the third. The stairwells still bore the heavy wire-mesh screens found in classic insane asylums, and there was a lot of dust. When we went onto the third floor and eased the door closed to prevent it from slamming, the scene looked just like any other abandoned building we had ever been in. 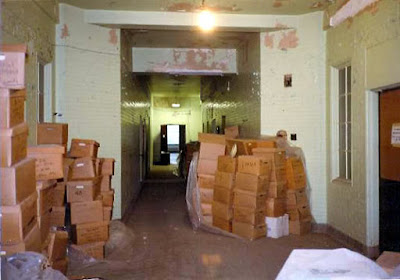 The floors were dirty, pigeon skeletons were strewn about, and the plaster walls were cracking. We had to be cautious in looking for motion detectors, yet swift so that our absence would not be noticed on the main floor. 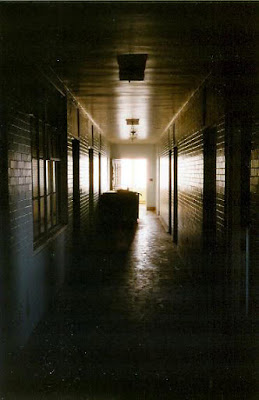 We moved inch by inch, painstakingly peeking around every corner for security devices. 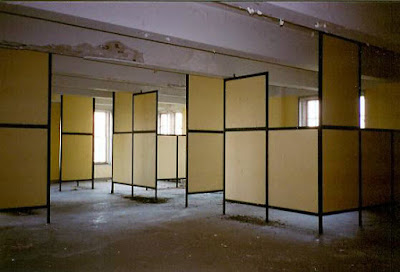 Many windows were left open, and the elements had begun to damage the building. This was a downright odd experience; there was not much of interest, as the rooms were all empty, but this truly was an asylum, not an office building. 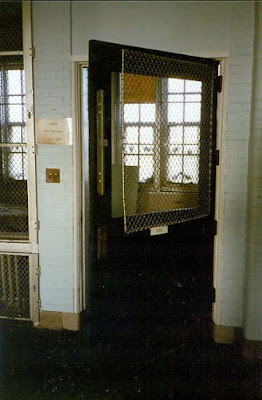 We found several seclusion rooms with heavy doors and tiny windows. And a new feature that I’d not seen before—a heavy rubber flap over the inside of the door jamb: 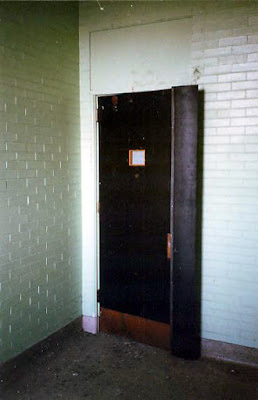 All the exterior windows were covered with that same heavy wire mesh. We could tell by the design that this was an old building, though it had only been built in 1929 to replace the original administration building. It had a total of six floors. 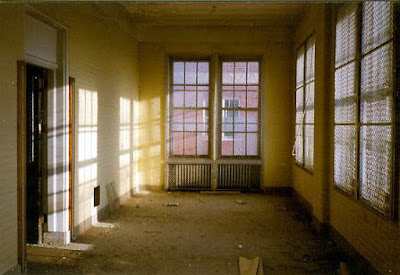 Channel 2 News had done a “ghost-hunting” story here around Halloween a couple years back, visiting the allegedly poltergeist-haunted sixth floor, led by some ghost-hunter "society." 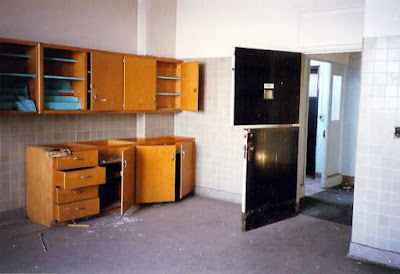 When things started allegedly flying around the room, the Channel 2 cameraman messed himself, dropped his camera and ran out screaming. Mmmkay... 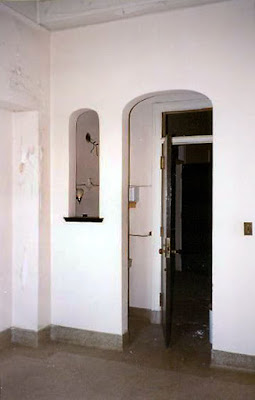 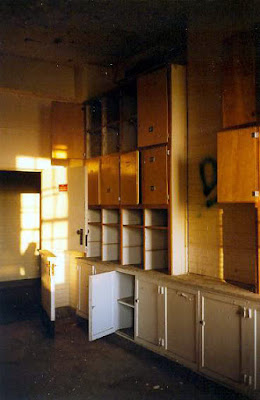 We went up to the fourth floor so that we wouldn’t have to worry about the people below us potentially hearing our footsteps anymore. It appeared to be more of the same…dirt, open windows, etc. 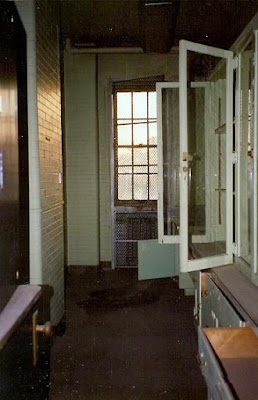 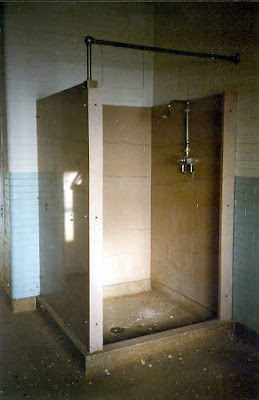 The toilets were of course all out in the open, offering no privacy whatsoever. When we tried the door on the fifth floor it was locked, so we proceeded to number six. We did find one room with big windows up there that had a bunch of stuff in it, but the door was locked. Near the window we saw something that looked like white, padded cloth, and had a bunch of straps on it. A straightjacket? We weren’t about to bust that door down, so we never found out. There was no poltergeist to help us bash it down either. 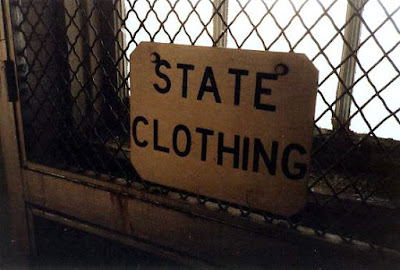 When we unexpectedly opened the door to the roof and saw where we were, we almost crapped ourselves, and slammed it shut again. Did we really wanna roof the joint…? 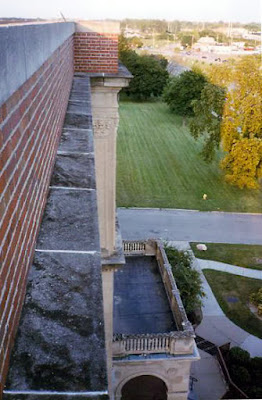 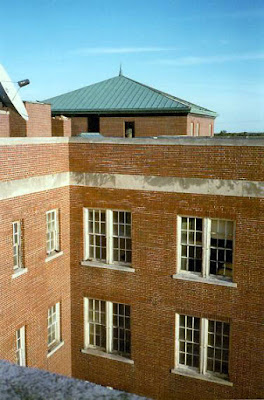 We all agreed to walk swiftly, hunched over almost in an army-style crawl to avoid being seen by the parking lot security guard down below. We opened the door again, and there was the "ELOISE" smokestack, staring right at us with those huge block-letters halfway up. We scrambled to the center of the graveled roof and ducked down with our backs against the wall of the copper-roofed service penthouse, where the elevator motors were.

There was quite a view from the top of this roof, and we could even see the Detroit skyline off in the distant brown rush-hour haze. The crumbling redbrick Eloise smokestack absolutely towered over us, and glowed warmly in the setting sun. We had never seen it up this close before. 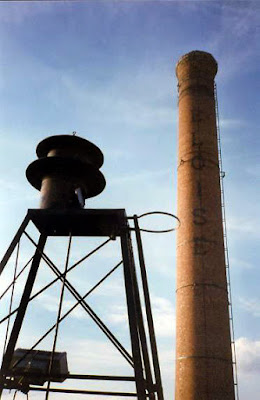 We opened the door to the elevator mechanical room and went in. It was fairly noisy in there, and sweltering hot. 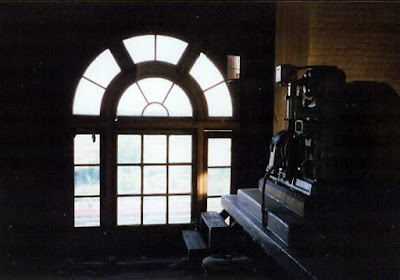 At the front of it was a large arched window facing Michigan Avenue. At this point we realized that we had been gone a good 20 minutes, and decided it was time to reappear downstairs. Tiptoeing gingerly down the marble steps again, we brushed off any traces of dust from each others' clothes that might give us away. When we nonchalantly waltzed out the stairwell and into the main hall again we noticed the guard was still gone, and the desk still unattended. We fled the scene in a hot minute.