Originally written in 2006, when Highland Park was still in receivership.

Highland Park is an independent city within Detroit, and once upon a time a beautiful center of human achievement, largely driven by Henry Ford's efforts in civic planning, and his newly built Model-T Plant--the most gigantic, state of the art factory in the world at that time.

It was here that Ford introduced true mass production, offered higher wages, and made cars more affordable. This made a middle class lifestyle available to just about anyone, and turned the auto manufacturing business into the auto manufacturing industry, thus changing the world as we know it and essentially ushering in the modern age with a single--yet firm--pimp hand.

If you ever wondered why the standard workday is eight hours long...it's because Henry Ford said so. You can fit three constantly rotating 8-hour factory shifts into a 24-hour day, so production never stops. This is also the site of the world's first expressway, "The Davison," or M-8, and the first mile of paved concrete roadway in the world was right here on Woodward Avenue, in front of Mr. Ford’s plant. Highland Park was America's most promising city, with flourishing, highly affluent neighborhoods and institutions.

Today however, it is perhaps America's most destroyed city, and those neighborhoods have been mostly erased by arson and swallowed by vegetation. Look at satellite maps of the area...you'll see that it resembles a prairie with a few splintered shells of ramshackle houses occasionally dotting the scarred landscape where once they were packed like sardines.

It lost over half of its population in a few short years. As if that were not enough, Highland Park was also devastated by a tornado in 1997. It is so destitute that it has succumbed to receivership; it no longer has a police force or fire department, and instead relies on Detroit's to put out its fires, and the Wayne County Sheriff to police its devastated streets. It is the worst picture of urban collapse that there is in this country.

To put it in perspective, consider this: the Highland Park City Hall is abandoned...

...and next door, so are the Highland Park Police Headquarters...

Note the shredded American flag hanging from the firehouse. It's a sort of surreality living here in Detroit sometimes, detached from the rest of America. We feel a great sense of loss when we pause to recall all that has gone to waste here. Take New York or Chicago–or any of America's most beautiful and cherished cities. Then, literally smash 60% of the houses and buildings, and leave half of the rubble strewn about. That's what living here is like. Until 1967, we were right on par with those great cities, every bit as gorgeous and optimistic and cosmopolitan. Now we're just that city that everyone forgot existed.

My associates had checked the police station out briefly the night before, and ran into a nutty guy who was living on the top floor. They ended up almost getting in a brawl with the guy, so naturally we were pretty apprehensive about going back in at night. But there was so much incredible stuff left behind, there was no way we could resist.  We had to loot while the looting was good; so far it seemed no one had found out about this place yet.

We came in as silently as possible, and went to the basement first, since that was where most of the cool stuff was–the evidence locker, the shooting range, and the boxes of old mugshots. We found tons of incredible crap left behind...it was like they left one day in the '90s and didn't take anything with them.

The holding cells were the old bird-cage style; the drunk tank was huge, and had seen some rough service. There was plenty of loot, but most of it was heavily funkified from the general nastiness of the scummy building.

Riot helmet and tear gas canisters...my tingling eyes and nose told me some of them were leaky:

Looting the vintage mugshot cabinet...remember to always clothe thyself in the mantle of the law whenever you should happen to be breaking it: 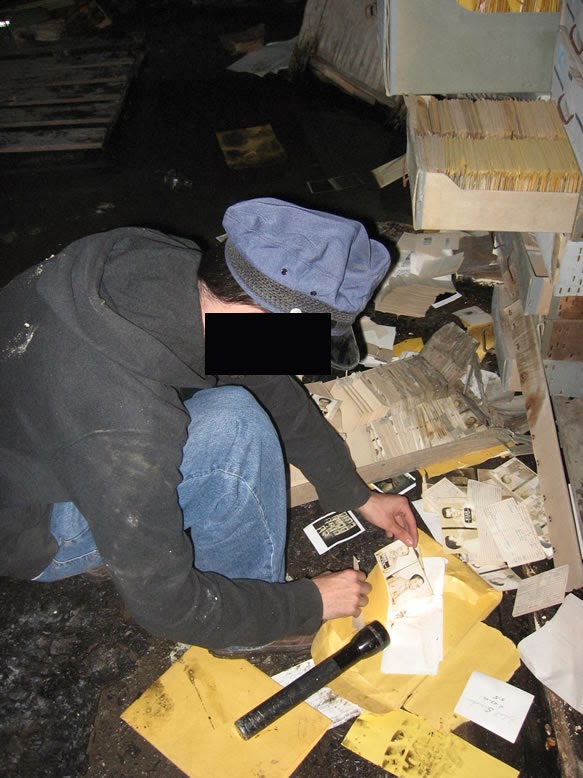 Bolt to a rifle, a folding knife, a loaded .22 Long Rifle magazine, and an evidence property tag that
says "1 white towel with suspected blood stains":

The knife pile was so big that it took two photos to get it all:

Recovered bullets from either a body, or the wall of a party store:

A crackpipe and a crowbar...the makings of a fun night:

A few samples of the assortment of mugshots that were to be found in the old cabinets...some jackass was selling racks of these mugshots at the 4th Street Fair one year: 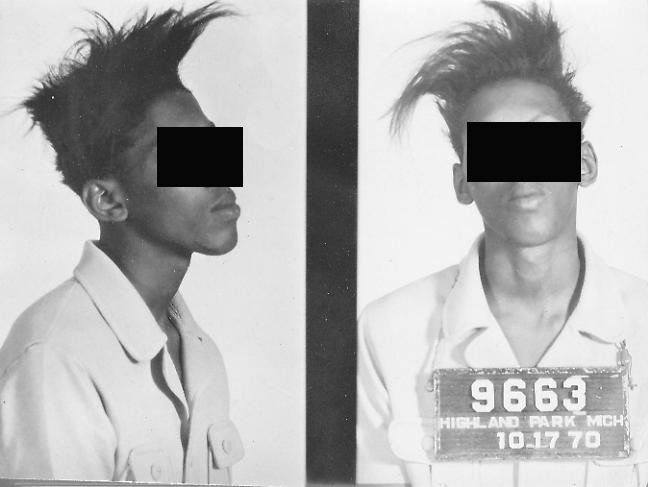 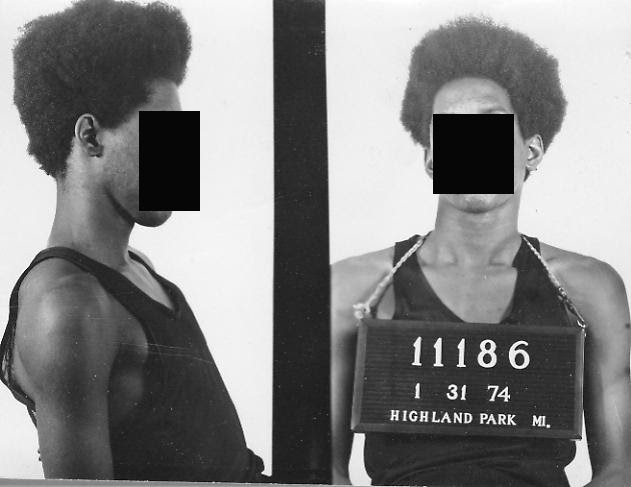 WARNING...the next two photos are from Wayne County Morgue. 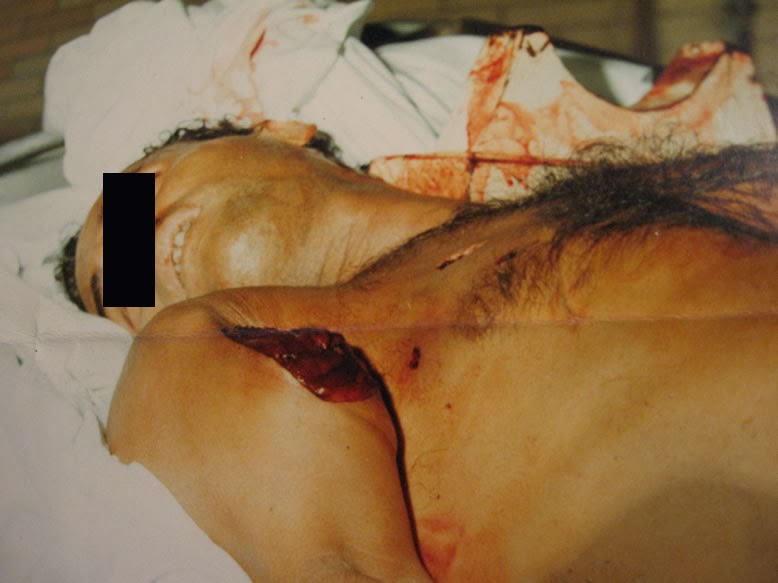 The three Highland Park municipal buildings were cloistered together just off Woodward and easy to walk right into at will, but I think each one had someone living in them. We ran into the guy in the Fire Department Headquarters, who had managed to lock the door to the room he was sleeping in. This guy at least didn't want to start a fight like the guy in the Police Heaquarters; when I unwittingly tried the knob to his room, he just mumbled "Gimme a minute–I'm sleepin."

The Fire Headquarters was a nifty, old school tiled affair, and like the other two buildings, built around 1917 and designed by Detroit architect Marcus Burrowes.

There was a little bit of firefighting paraphernalia laying about, but not much.

The poster on the ground here is part of the Detroit effort to stop Devil's Night arson by plastering them all over the abandoned buildings. There were stacks of 'em here:

The cleat on the wall most likely has to do with the hose tower, if I had to guess.

It seems even a plethora of encouraging mottos emblazoned high upon their walls was not enough to stave off final darkness:

"SWEAT MORE DURING PEACE–BLEED LESS DURING WAR." In the center is stenciled "Highland Park." Not your average graff. I'm tempted to say it was one of the firefighters who served there, but that's not exactly protocol to rattlecan your own station.

The Highland Park Fire Dept. was the subject of a short documentary entitled A City in Flames, which showed the extremely sub-par working conditions of the firefighters here.

The horizon is totally filled up with the hulking craneway building of the Model-T Plant looming beyond the roof of the courthouse nextdoor:

I explored the ruins of another Highland Park Fire Dept. station in another post.

The Highland Park Municipal Building sat immediately nextdoor to the Fire Headquarters, and contained the courthouse.

Again, this building was designed by architect Marcus Burrowes.

In fact, if you wish to see an identical twin of this lobby and stairway, go visit the (Old) Dearborn City Hall Annex at Michigan & Schaefer, also designed by Mr. Burrowes around the same time.

The similarity is uncanny. But, you know, without all the carnage.

This was the first time I've gone into a courtroom without being searched or metal-detected since the 1980s...

Wanted posters still clung to a bulletin board near the door:

"You may approach the bench"...

Everything in this town seems embattled, or besieged, or overrun; looks almost like the bench got bum-rushed:

The hose tower of the Fire Department Headquarters, which housed the local air-raid sirens:

This looks kinda important to be sitting in a pile of junk near a puddle of sewage in a basement...a solid bronze plaque–it musta weighed 250lbs...pretty decent scrap value:

The plaque commemorated Henry Ford's life and Highland Park subsequently becoming "the birthplace of mass production." Not the kind of thing you would think belongs thrown in a basement amongst a pile of sewage-soaked junk. I mean, what gives around here?

Then I saw this hanging in someone's office, and it summed everything up for me:

That was eight years ago. The words still ring as true today as Detroit continues to wrestle with its own "bankruptcy" and collapse.