The Woodward Building was one of the better of the various abandoned buildings of Merchants' Row that I've explored. And despite the fact that you can't always access every single building in a block by roof-hopping, thankfully not all of them require acrobatics either—sometimes a good swift Fonzarellian karate-chop is all that is needed to suave a door open. Being able to recognize those particular portals is something else however.

The uninspiringly-named eight-story Woodward Building at 1449 Woodward was yet another Albert Kahn design, completed in 1915. Unlike most of the buildings downtown, this shiny white terra cotta nugget somehow dodged the 1950s bullet and still retains its original cornice line.

It was owned by Jacob Siegel, local "women's clothing mogul," and the ever-expanding Kresge's had space on the first floor. They renovated in 1932. Looks like Uncle Albert kept the same staircase design he used in the Fisher Arcade:

Detroitblog John was quite often my partner back then, and this "entrance" was one that I believe he arranged. We found the buildings of this block to be just as relatively untouched as the rest of Merchants' Row.

Thankfully, accessing the Woodward Building's roof also gave access to the rest of the block's rooftops as well, almost all the way down to the Elliott Building at Grand River Avenue. The only problem was that once you got to the roof of the Valpey Building, the drop down to the roof of the Elliott Building was too far to jump; we would have to figure out something else for that one. The two buildings in the middle were actually already renovated as lofts.

God damn it was f%$#ing cold that day. Here are the Ferguson, and Kaiser-Blair Buildings across the street:

Here's a view of the Woodward Building from the roof of the Pierson Building:

Walking across the tops of the buildings on this block, we were able to access the Valpey Building again, which had shed its PEPPER'S SHOES facade cladding in favor of a few new windows—the product of a doomed renovation attempt:

To our disappointment, there were no pass-through floors between the Valpey Building and the Elliott Building either.

The Valpey Building was built in 1896, and designed by Donaldson & Meier, the same local architects who gave us the Stott Building and First Unitarian Church. The radiators in here were pretty snazzy-lookin...the stairs however were definitely 1896 though:

The place was clean and swept out...I hoped that renovation would be soon, but sadly this was not to be for at least another decade. The view from the roof showed a glimpse into Capitol Park and a similarly stalled-out Book-Cadillac renovation:

A week or so later, we were finally able to heft ourselves up and into the Elliott Building...viewed (at left) from the Singer Building across the street:

The older photo on the right shows the old "House of Nine" sign on the Grand River facade, and an even older paint ad near the roof that advertises Kresge's dollar-store status. It was here that the K-Mart Corporation got its start. By this point the c.1894 Elliott Building was trying to get its own ill-fated renovation started as well, as you can see by the banner in the photo on the left.

Once again, interiors were swept pretty clean, in preparation for luxury lofts or whatever crap someone was trying to put in there. As with the rest of the infrequently-infiltrated buildings of Merchants' Row, the fixtures and interiors here were basically untouched by the hammer and the crowbar; I hoped that whatever renovation came would not be the typical drywall & marble countertop junk, but instead retain some semblance of originality.

The stairs in here were pretty damn swank too:

The huge lunette windows of the top floor were what I had come for...mmmmmm, yummy.

Almost all the vintage light fixture globes were intact:

...as well as the faded remnants of some old ghost signage. View to the semi-vacant Clark Building:

See if you can spot the vintage TURDL tag below...

The age of this building really showed through in the construction style; I think it's the oldest building on Merchants' Row, though it was obviously renovated since 1894. Kresge's had moved into the Elliott Building in the late 1910s and stayed until the 1960s. They took over the bottom two floors by 1931, and conducted an extensive "modernization" in 1939 (which included the installation of an elevator). This was where Sebastian Kresge got his business started before expanding out to other buildings, and eventually turning "K-Mart" into a huge corporation, giving birth to the modern day "dollar store."

The last tenant of the Elliott Building was Eastern Wigs, in 1997.

Lane-Bryant got its start in Detroit. They started up in 1916—at the Washington Arcade Building—before moving to 1452 Farmer Street in 1922. By 1945 they had stores across the country, and were looking to relocate their flagship store yet again, to the Woodward Arcade—which they remodeled in 1946 with the help of noted Detroit architect Charles N. Agree, into the big grey art-moderne thing you see on the left here: 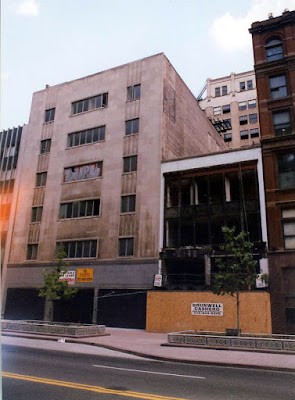 Lane-Bryant vacated this building in the 1980s. Agree also did similar facade "modernizations" for Winkelman's and Federal's department stores in the city. 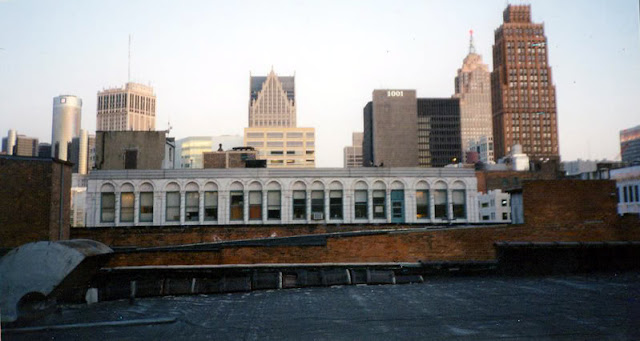 We didn't hold much in the way of expectations for this one, as we could plainly see from the exterior and our peerings into its windows from other nearby buildings that it promised little in the way of excitement. Nonetheless it was new to us, and therefore good. It also gave access to the roof of the vacant United Foundation Building building next-door at 1528 Woodward: 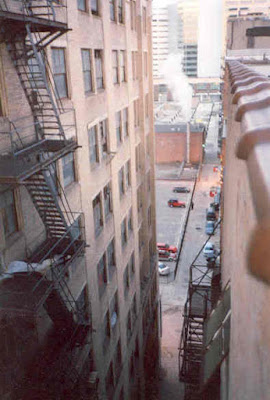 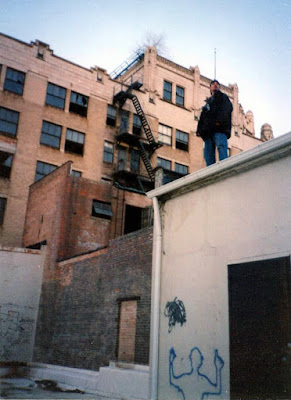 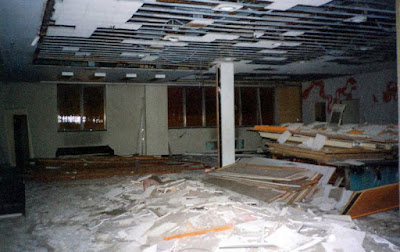 If I'm not mistaken, Lane-Bryant was founded here to market clothing designed for them thick women, eventually nationwide. Because not everyone is a size 2. 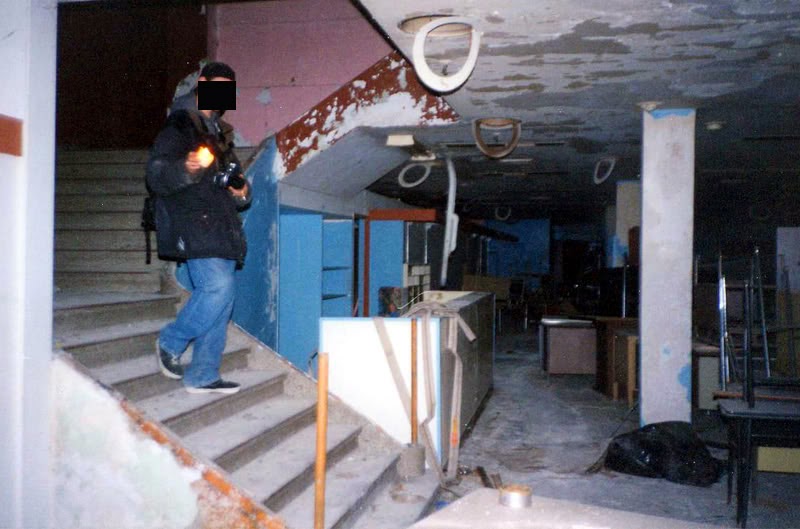 At some point somewhere around Stupor Bowl XL, I made a solo trip into the Singer Building at 1414 Woodward Avenue. It's the super-skinny five-story one here on the left:

As one might imagine, fire escapes work both ways. 'Nuff said.

I nearly tore an abdominal muscle pulling myself up, but it had to be done. Some genius had swiped one of those fancy Spirit of Detroit fence screens designed go over the fences placed around abandoned buildings to hide our blight from the tourists, and hung it in the window. Backlit, it looked pretty neat:

The Singer Sewing Machine Co. Building was a latecomer to Merchant's Row, having been built in 1936. It however holds the distinction of having been designed by Detroit's venerable Smith, Hinchman & Grylls—who just so happen to be America's oldest continually operating architectural firm at the moment. They got their start only two years after the Singer Sewing Machine Co. itself—who have been around since 1851. Singer built their first factory in Detroit in 1904, and from this beanpole of a building sold their machines, patterns, and fabrics.

Singer's connection to Detroit originated however when Connecticut native Isaac M. Singer was still trying to make it as an actor in 1849. Actors in those days were probably natural costume-makers by trade, and while Mr. Singer was performing here in Detroit he heard the news that Elias Howe had invented a sewing machine. Singer was so convinced that he could build a better sewing machine that he quit acting and went home to Bridgeport to invent one of his own.

Also of note, Walter E. Flanders—a production manager who in 1907 helped Henry Ford set up his first assembly line for the Model T—got his early manufacturing experience from working at the Singer Sewing Machine Co. plant in New England.

Again, there wasn't much of interest in this tiny building, but it was obscure and had to be done. A chalkboard with their sales figures...

Well, okay, I guess there was an actual Singer sewing machine in here too:

Talk about a narrow floorplan...could you imagine someone building something like this today?

That damn steam outlet blurred out pretty much everything else:

Woodward could stand to be rolled up for the night:

As of 2017 I believe all of the buildings featured in this post are being renovated or are already reopened, and the only time Woodward can be seen that devoid of people is on the night before the Thanksgiving Parade when it's closed off.