An hour northwest of Detroit, the city of Lansing is an industrial giant, though on a smaller scale than its bigger brother.  And even though it has managed to fare much better than Detroit in terms of urban blight (or total collapse), it has stood as a largely tarnished, disinherited shadow of its former glory for decades. 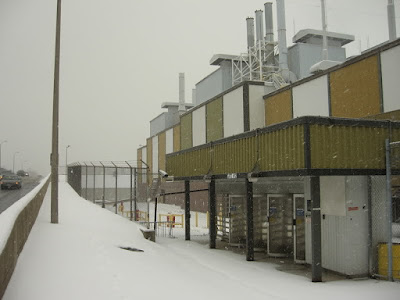 It was here that Ransom Eli Olds, inventor of the world’s first successful automobile chose to set up shop after his original plant in Detroit burned to the ground. General Motors eventually merged with Oldsmobile, though production of Olds cars stayed almost exclusively in Lansing for quite some time. 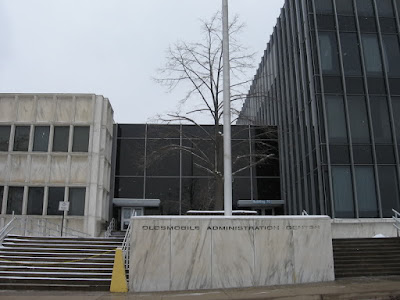 Thus, from the dawn of the 20th century, Lansing has been a staunchly GM-loyal town, since, as the maxim goes, if you buy an import you’re taking the bread off my table. There have been perhaps fifteen GM/Olds-related plants in Lansing in the past 100 years, many of which are still standing, though several were either closed or slated to be in the next couple years at time of writing.

Here, we have the jagged ruins of Oldsmobile's “VerLinden Street Plant,” known on paper as the Lansing Car Body Assembly #4. It closed on May 6, 2005. Or was "shuttered," as the newspapers like to say, though I have never once seen a single shutter ever placed on a factory in my life.

It had been standing partially demolished since then, so I decided to go check it out since it seemed that demolition may have taken a pause. Like any good automotive plant, it was composed of older buildings that have been added-onto up until recent times.

The oldest two parts of this plant dated to 1901 and 1920, and housed the Durant Motor Co. from 1921 to 1932. When General Motors founder William "Billy" Durant lost control of GM for the second time, this was his bid for reentry into the automobile business. He had this plant built along VerLinden Avenue (named for Edward VerLinden, Oldsmobile's first factory manager), but even the Durant Motor Co. failed due to the Great Depression.

In 1935 Fisher Body Division took over this complex, and later still it was the site for Cadillac-Olds-Buick production.

It was expanded to fill the entire city block over time, and finally comprised a total of 2,630,000 square feet of space. The HAER's Lower Peninsula of Michigan Inventory of Historic Engineering and Industrial Sites calls the c.1920 plant "an excellent example of the construction of long, narrow assembly plants in reinforced concrete."

The final products to roll off the line at this plant were the Chevy Malibu/Classic, Pontiac Grand Am, and Pontiac G6. It stamped its cars with the VIN code “M,” so if you happen to own a Chevy, or Pontiac with an “M” in the VIN, then it was built here at VerLinden.

When it closed down in 2005, it was the longest-operating automobile factory in the world, having been in business for 104 consecutive years.

You’ve seen the old crumbling ruins of archaic auto plants like the Packard, but this is something entirely different; an updated, modern auto plant—one that should still be producing cars—ground to a halt and silenced, body panels still hanging from its conveyors.

Except this plant has actually been making cars since before the Packard; this is what the Packard Plant would look like today if it had been kept in production, and continually updated and modernized.

They said that the robot would spell the death of the auto worker, but who would have guessed we would also see the day these robots sat idle in the dark, collecting dust on a soggy Lansing afternoon?

Thanks to the ongoing cluelessness of the Big Three automakers--and Michigan’s continued reliance upon them--our state again began slipping into the depths of bankruptcy and ruin in the early 2000s while some Canadian lawyer lady (Governor Granholm) promised to the contrary that we would soon be "blown away" by the positive changes she was making. But all through 2006, all we heard about was endless layoffs and plant closures….yeah, we were blown away alright.

And who do they blame for the backslide...?

Us. The suckers who “Bought American” since the ‘70s even though we knew they were inferior cars, just because it was the patriotic thing to do, and because manufacturing is our lifeblood here in Michigan. The Big Three blamed us for not buying American, while they themselves went to poorer countries to outsource our jobs to people for abusively low wages, and while the foreign carmakers built plants in America, in "Sun Belt" states that guaranteed a "right" to work (wink, wink).

And meanwhile Michigan crumbled, and the UAW pointed fingers, and the companies pointed fingers back, and the unemployed screamed at both of them, and the politicians dined on filet mignon with the bankers.

FUCK this modern global bullshit. I long for the days of old iron, and rear wheel drive, and cars with V-16 engines and badass names like “Barracuda” or “Wildcat,” not pussy names like “Neon.” The days when cars were built by men, not machines...

The days when roller skaters got impaled on gleaming chrome tailfins as pinstripe-wearing “Better Dead than Red” fat-asses sat behind hula-hoop-sized steering wheels puffing on a cigar with one hand, and throwing styrofoam litter out their non-power-window with the other before slamming on the chrome accelerator of their 22-foot long pleasure barge and sending 200+ (gasp!) horsepower through their bias-ply tires with a pleasing shriek as they carelessly pay with pennies to fill the 90 gallon tank on their rumbling, ozone-murdering machines...

The days when people probably would’ve thought “computer” was just a fancy term for “Commie,” and the notion of putting one in a car would’ve been met with raised eyebrows and being told to go suck an egg.

Once upon a time, the three monolithic smokestacks on the Grand River towered over Dr. Oldsmobile’s dominion as a symbol of Lansing's power and might, and the home of the true and righteous vocation of automobile assembly—birthright of every native-born Michigander with a high school diploma and the fortitude to install the same f#@$%ing door latch 14,986 times per week... 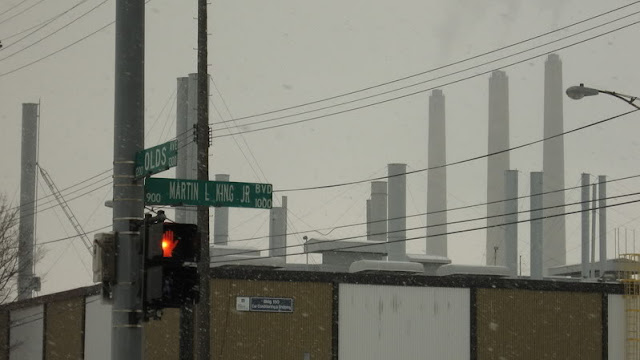 Every man was guaranteed an honest living for himself and his family in recompense for an honest day's labor, and the ability to hide a hangover. There was no greater job security in the world than to live in Michigan.

Those were the days when Michigan was healthy and mighty--no mere “Mitten,” but a clenched Fist of Industry capable of single-handedly pounding countries like the Axis to dust under the sheer weight of our labor force and resolve like a 40-ton stamping press. 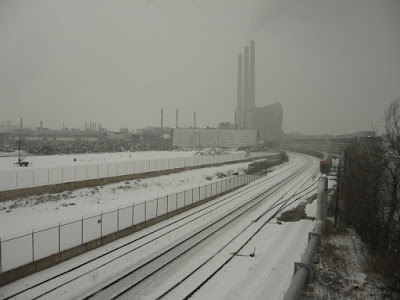 But now this is what we are left with. The three smokestacks on the Grand River stand cold and grey, their long shadows a reminder of how much of a dinosaur we have become. It fills one with many conflicting emotions…I guess you’d have to be born in the Rust Belt to understand completely.

You couldn’t get an auto manufacturing job in 2006 even with a gun to your head, unless half your family tree were already employed by one of the Big Three. It is impossible to live in southeast Michigan without knowing at least one person who is or was employed by the auto industry in some capacity.

It was right here in my ‘hood that the terms “blue collar” and “white collar” were invented. If you own a Ford truck, chances are its transmission was assembled by my neighbor, John.

I myself have worked at a shop making electronic components for Edelbrock, and have been a subcontractor for Ford. I have another friend who works at Roush. During WWII, my grandmother worked at the famous Willow Run Bomber Plant building B-29s; she was a “Rosie the Riveter.”

All these places that built the world and the prosperity that I grew up in are disappearing, falling to the wrecking ball, while the residential streets empty out and the city avenues appear desolate, devoid of human life.

It's like there was a great migration that started in the mid-2000s of people--young and old--leaving Michigan in search of a better life.

Once upon a time, it was the other way around.

Now the rest of us, those who refused to abandon the sinking ship, we are increasingly surrounded in the memory-haunted ruins of the past...watching our once-great world crumble away, piece by agonizing piece. 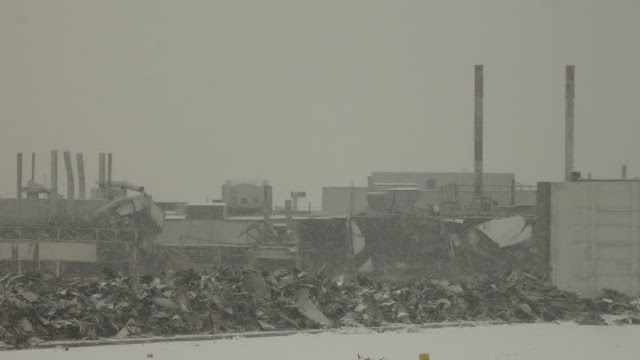 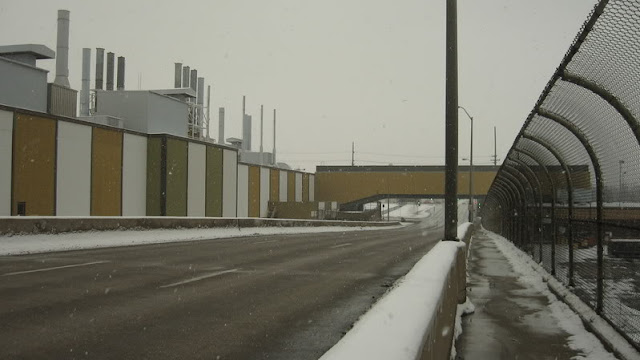 Where now the car and the driver...?  Where is the horn that was honking...? 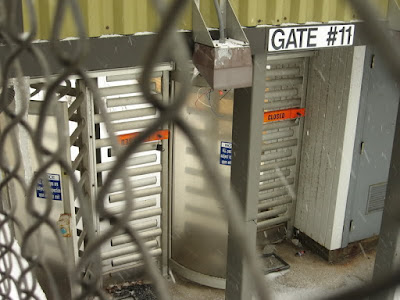 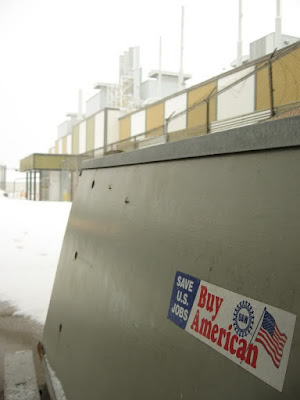