Return to part 3
One beautiful thing about ruins hunting in the Keweenaw is that none of these mine towns is more than five minutes up the road from the last. We could practically walk. So that was a definite time-saver. Upon passing through the Allouez Gap and pulling into the village of Mohawk, we saw the poor-rock piles for #4 shaft, and decided to start there. A couple chicks were combing the piles with a metal detector; rock hounding is big up here (oh yah 'dere, and it's a great way to meet boys, eh!), plus it was the start of the school year, and these two were probably Michigan Tech students (Tech is the best-renowned mine engineering school in America). When we got out, this was basically all we could see: 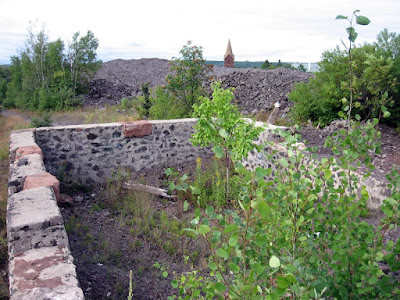 I scratched my head, now quite flummoxed. We hiked around a bit through the trees, but turned up nothing. Once again we climbed the rock pile to get a look. We could see very little. Off in the distance was a single foundation that might be promising (in fact, it was Mohawk #5 or #6). We decided to drive to it. When we got there, we found an active gravel yard with equipment working, and nothing else.

Exasperated, we turned north along the lode, to check for Mohawk #1 through #3. We could see several more rock piles, but they all seemed fenced off and likewise house some in-use facilities of some sort. We just continued north along 41, to Gratiot Mine. This did not have a town attached to it, but strangely it was the only mine actually marked on my Michigan road atlas, which is why I figured it to be worth looking into.

We turned down “Gratiot Location Road,” a faded gravel trail, but after going quite a way did not see a single hint of ruins. I felt the victim of a very cruel joke. All we found were logging roads. We got back out on 41, and continued north to see if there were any other "Gratiot" roads. Almost immediately we passed the huge shaft vent of Seneca #3, which I knew to be adjacent to Gratiot: 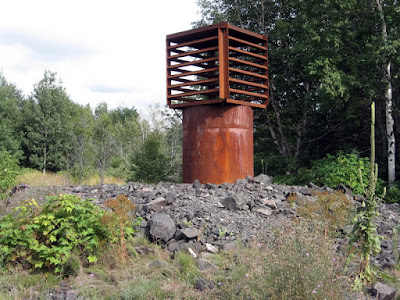 It is one of the few shafts in Michigan that is actually capped properly, and has a bat cage. We continued northward however for some time, to the village of Central, where I knew there to be at least one sure find. We were now nearing the end of the Keweenaw, Michigan's most northerly reaches. By the way; all these towns that I am mentioning are actually closer to being ghost towns, and some are listed as such, depending on where you look. They have populations in the low three-figure range or less.

The houses all have that ultra-northern “shanty” look to them thanks to a roof pitched for shedding deep snow, and it is a rare example that is not showing its age. They are in fact old company houses built for the thousands of miners that once peopled this region.

Few if any folks were around to be seen. Just houses. Sloop made special note of the eeriness of this in more than one instance. Ever seen In the Mouth of Madness? I should be acclimated to this kind of emptiness from growing up in Detroit, but this was a totally different flavor. Aside from the rows of company housing, there were also many other buildings that were also obviously leftovers from the Copper Age, such as this old hoist house that belonged to the Ahmeek Mine #4: 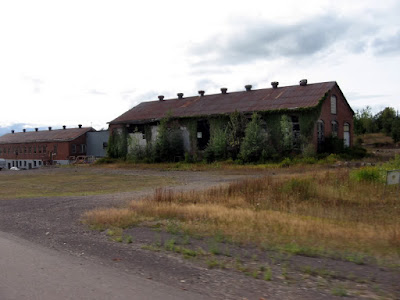 Central actually sort of curated their mining heritage, using signage to inform visitors of what they were looking at. We came across a sign that referred to a depression in the ground. It said “Site of Central Shaft No.2; Inclination: Vertical; Depth: 3,100 feet” I told Sloop (who hadn’t read the sign yet) he “should try to 4x4 that mound over there” with his truck. Heh, most mine shafts aren’t marked this well; one has to be careful when traipsing around the woods in the Keweenaw. 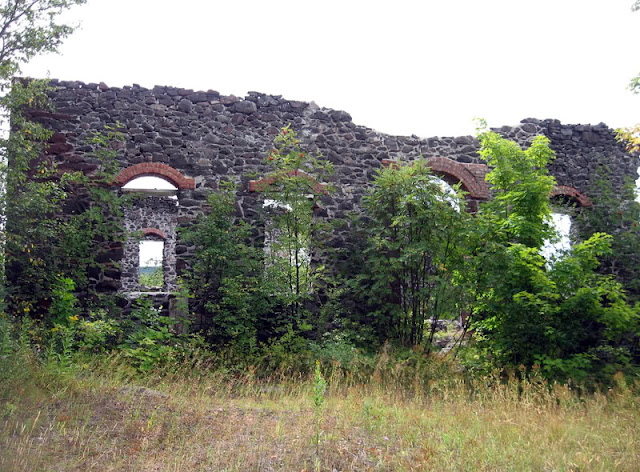 CopperCountryExplorer warns that most were not properly capped (like Seneca), and often they just bulldozed some dirt over top of the shaft after knocking some debris into the opening. Walking over these areas can cause cave-ins. Sometimes they used junk cars to help fill the hole. So if you see an old Yugo or station wagon sticking out of the ground, get the hell out of there, haha. Nothing like falling a mile and a half into the earth to mess up your vacation. Other warning signs are steel poles sticking up out of the underbrush in a row (which would’ve once held barbwire fencing), or faded, blank signs nailed to trees that would’ve once said “DANGER MINESHAFT.”

Central Mine #2 shaft was the scene of a disastrous cable break in 1872 that made world news when it sent 10 men plummeting to their deaths down the shaft, and inspired the ballad “Sad News From Central Mine.” Just up the road was Engine House #2, which would’ve driven the hoist for said shaft. At least here we had some kind of actual structure: 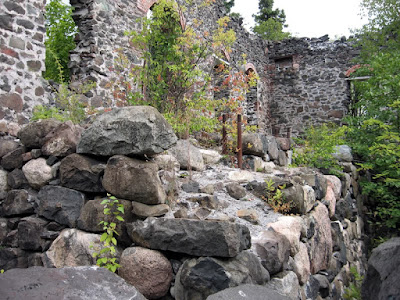 Another way to avoid falling to your doom is if you know that you’ve already passed the engine house, and are passing the headframe or rockhouse ruins, you are about to come across the shaft because that’s almost always right behind the headframe. 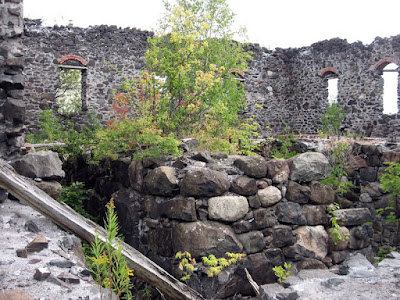 After deciding we didn’t feel like risking another fruitless chase, we continued northward to Copper Harbor (population: 50) so we could lick our wounds and indulge in a few beers with lunch. Fully satisfied, and a bit recouped from our marginal success at ruins hunting, we set upon the road southward again (because that’s the only direction you can go from Copper Harbor).

Gratiot was still nagging at me in the back of my head. As we passed the Seneca #3 shaft cap again, I told Sloop to pull in. We tried a different path, and soon found the base of the Gratiot rock house: 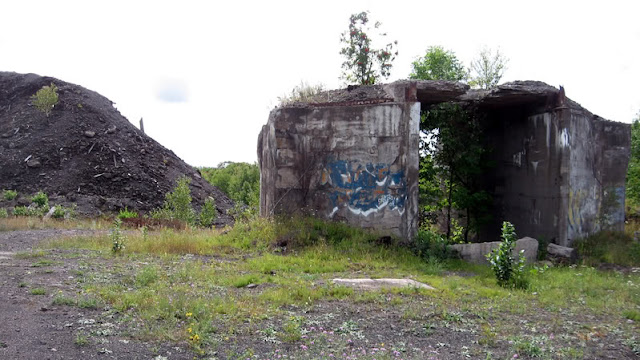 From there we were able to plot a course to the foundation of the massive hoist. It was essentially hollow: 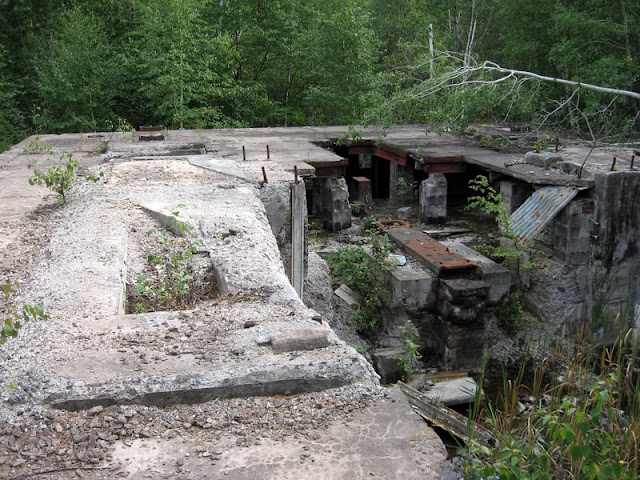 Even though this was my second exploratory trip into the Keweenaw Range, I was still woefully uneducated as to what I was looking at, and looking for, and you will see as I continue to post more-recent entries with better research that there was ever so much to be learned. For instance, see this post explaining the tangled relationship between the Gratiot and Seneca Mines on CopperCountryExplorer.

During and prior to this era, I kind of viewed the Keweenaw as the ultimate "undiscovered country," because it was not only the most northern, most remote corner of Michigan you can really get to, but because it is also the furthest from Detroit; a drive of over 10 hours (you can drive to Atlanta, GA in the same amount of time). It was also one of the wildest and most rugged (once you leave the main drag of US-41), despite its industrial legacy. 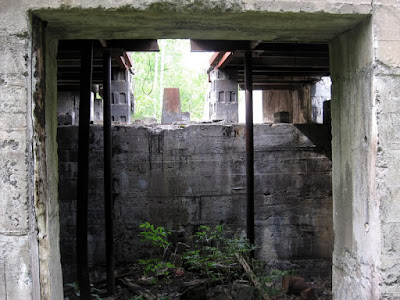 Unfortunately there was not much else to see here at Gratiot besides some smaller and much less spectacular building foundations, but at least this time I had satisfied myself that I had seen all of it. Feeling somewhat defeated, I reluctantly admitted defeat and sheepishly turned our course back toward the kiddy pool—Quincy Mine. Apparently I wasn’t ready to take my training wheels off.

We had to give up before we had seen half of the Quincy location, as all good things must soon come to an end. We pointed our ship’s bow toward more southern climes, and began our slow trip home.