Ruins From My Own Past 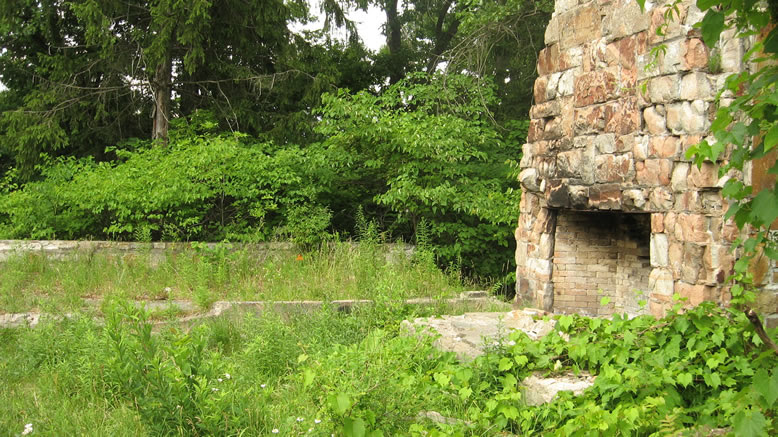 After so many years I have finally come back to this place, of which I have so many vivid and pleasant memories from my childhood. I come back here a much older man than I was then. I come alone, and the sight of this old place makes me feel even older. Here I remember spending so many days while growing up; this was my family's summer home. 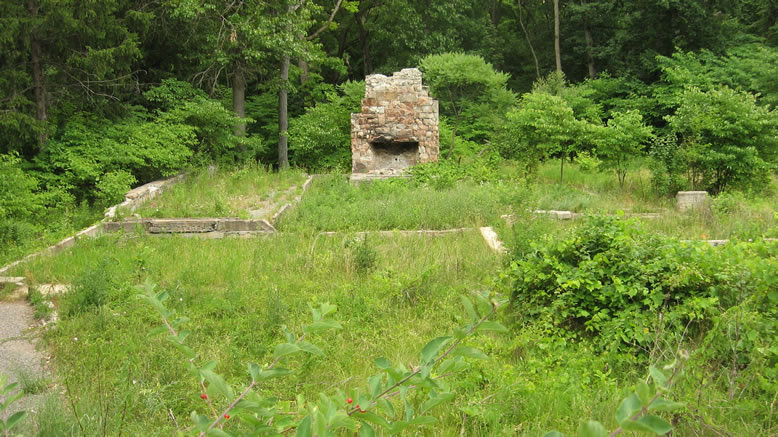 My father was a businessman and he built this cottage for us so we could enjoy weekends out at the lake, away from the noise and congestion of Detroit. He worked at my grandfather's business which was very successful, so he was able to afford to make this cottage extremely luxurious and very large, nestled up in the woods and hills outside of Milford, where few other people lived at the time. 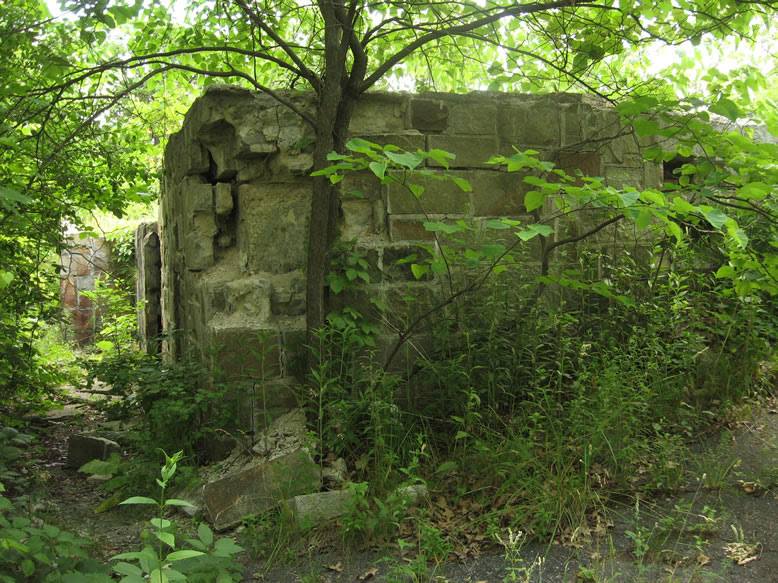 It was a perfect, beautiful place...in fact, I see that it and all the land around it has now been turned into a state park. It's been a long time since we lived here, but I remember it like it was yesterday. This is where my bedroom was: 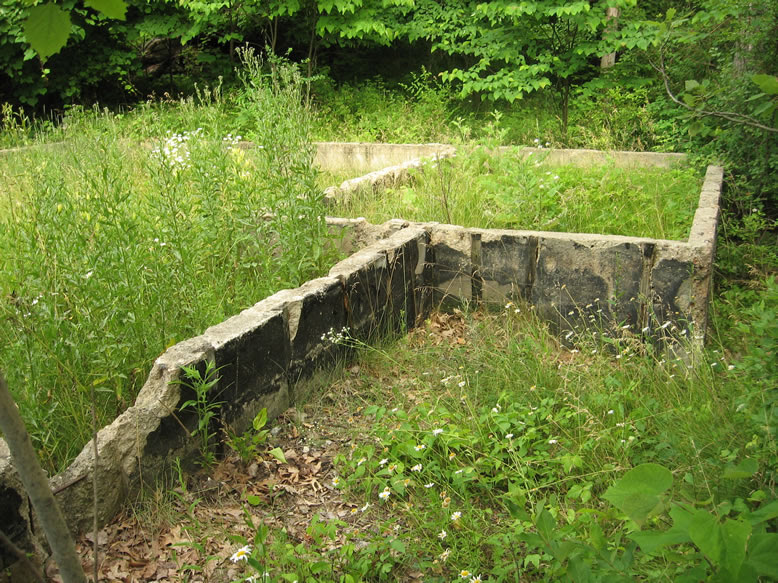 And this was the bedroom of my father and mother: 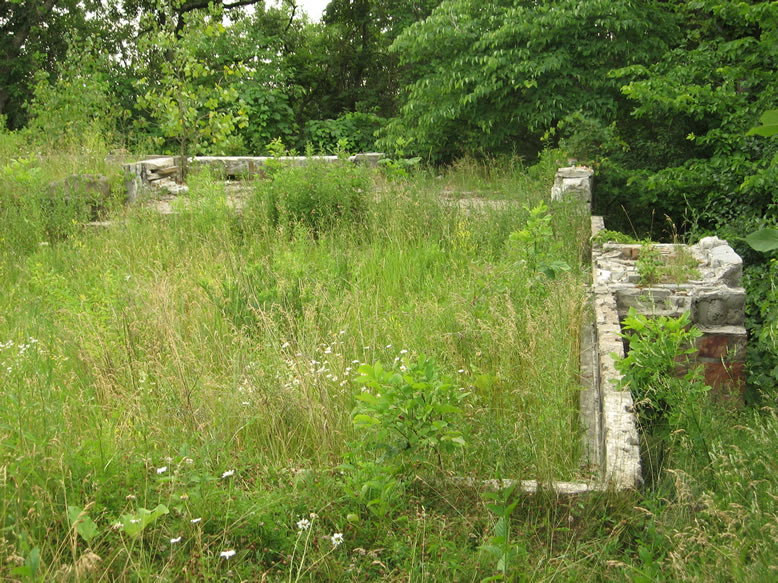 This is all that's left of the great hearth where I would sit around the fire with my brothers and sister in the evenings before bed, or where my father sometimes would entertain important guests: 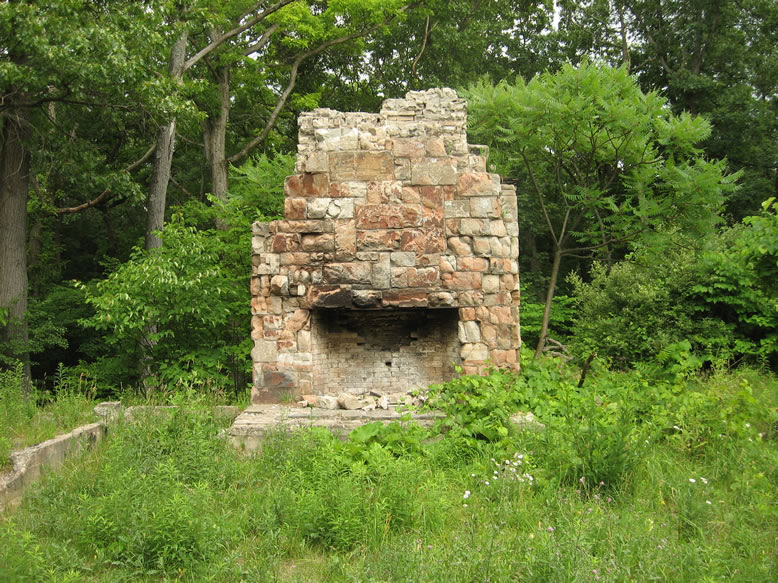 This is what's left of the arched entryway from the cul-de-sac at the end of our long winding driveway where guests would pull up in their limousines before being received by my father: 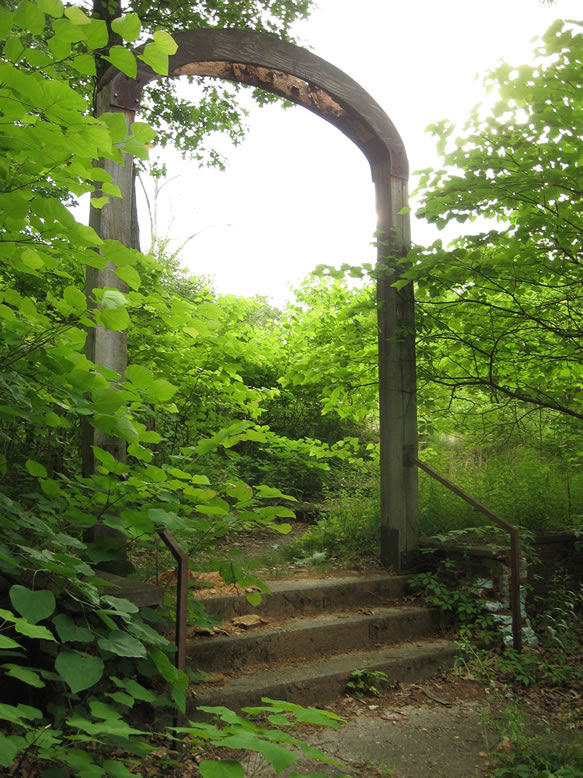 Mostly they were here because of my father's business...he had to meet with people an awful lot. He always seemed to be discussing important business. I remember often playing with my toy soldiers by this hearth. The company is still around today, even though our old summer house has fallen into ruin and been forgotten. This is the veranda where I would play with my two brothers...some of the old flagstones are still intact: 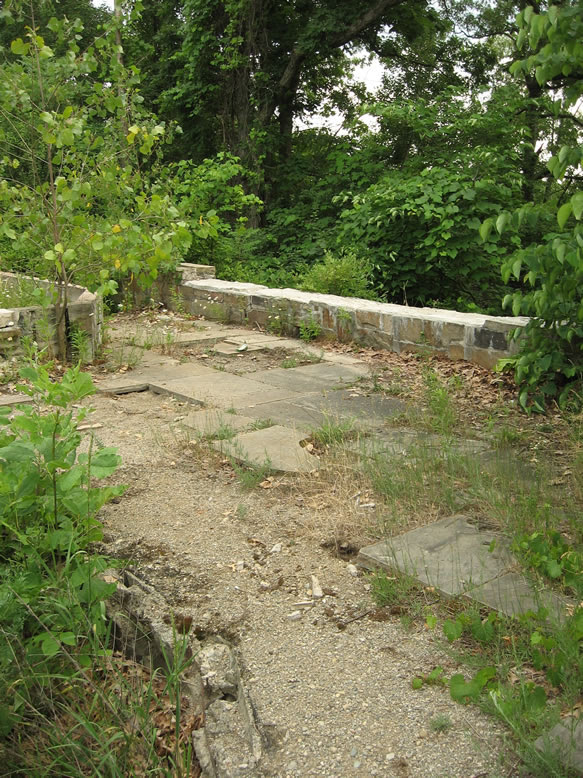 I remember I used to like playing out here because my model car rolled well on the flat surface. From here I sometimes saw my father through the window, tinkering in his study...he was fascinated by machines and was into racing cars. We could go hiking too; there were a couple miles of trails leading from our house into the woods, and often I would go to find a spot away from everyone else. Or if we wanted to, we could go swimming. We could go to the lake, or there was a path leading down the back side of our hill where we had a swimming pool: 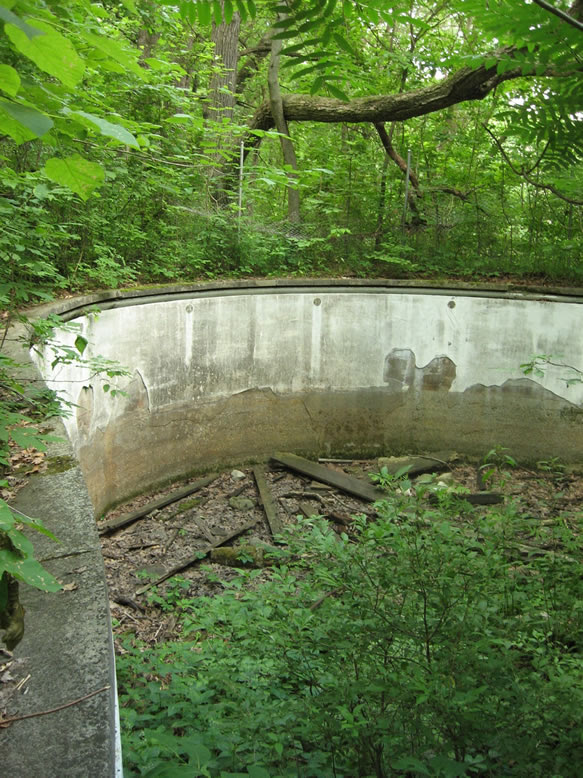 It was here that I learned to swim. I remember sitting on the side up here a lot because the sun always made the concrete so warm: 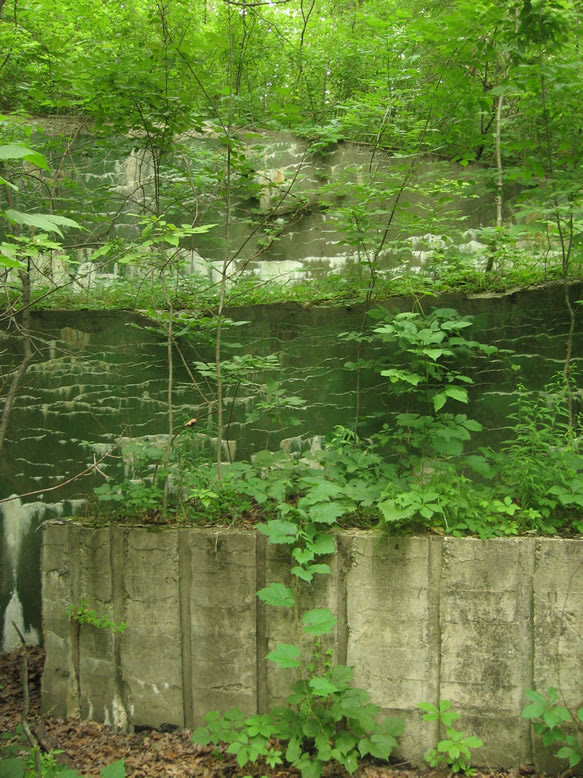 There was also a pool house here too. But it's all gone and everything's overgrown in trees now. It was awfully rare back then to have a pool, but because of my father's business, we were very rich. Even though we had this cottage away from the city, my father died before my grandfather because of the stress he was put under by both his position in the company, and from grandfather.

Have you guessed who I am?

My name is Benson. My father's name was Edsel, and my grandfather was Henry Ford. 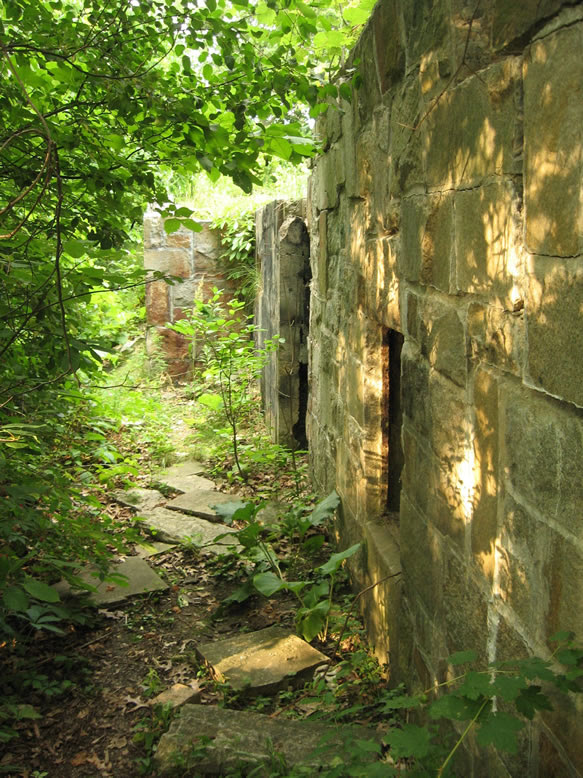 Okay, so I'm not actually Benson Ford...I composed this fictional story based on the knowledge of what the Haven Hill mansion was; I filled in the details by using a little poetic license. Haven Hill was to Edsel Ford what the "Eagle's Nest" was to Hitler–if he'll forgive the comparison–a retreat up in the hills where he could be away from the stress of his professional life and spend time with his family, and only his closest advisors.

Detroit's Indian Village neighborhood was no longer suitable for a man of Edsel's caliber, as a lack of privacy was becoming a concern, at a time when labor union strife was escalating, the super-affluent were seen as targets, and the Lindbergh kidnapping was making headlines. So he moved his entire family up to the summer retreat of Haven Hill full-time while construction of their Grosse Pointe Shores dream house was ongoing. I'm awfully tempted to think that he may have done so just as much to get away from his father, who was constantly pecking away at him psychologically.

Haven Hill sat on 2,400 private acres, while the lodge itself was 6,100 sq.-ft. in size and was built from 1923 to 1926 with cedar logs from the Upper Peninsula. The architect hired for the buildings was Robert O. Derrick, who also designed Henry Ford Museum. According to a book by Geoffrey Upward, the reason Derrick was chosen to design Henry Ford Museum (instead of, say, Albert Kahn) was because of one night in 1928 when both men were aboard a steamship to Europe. Ford knew that Derrick was aboard, and invited the architect to his party for tea one night, and they got to talking. Derrick was also friends with Henry Ford's son Edsel and his wife Eleanor, who of course were very active in the Detroit art and culture scene.

Additionally, the grounds at Haven Hill were custom-designed by the famous landscape architect Jens Jensen (the same who designed the grounds of Fair Lane Estate, and other Ford properties). The Adirondack-style lodge commanded sweeping views from its granite terraces atop one of the highest elevations in Oakland County. Edsel strove to make his summer home, Haven Hill, as free as possible from unsightly things such as powerlines. He did this by burying all utilities underground (probably at least partly at the behest of his nutty father, who insisted on having secret tunnels everywhere). The boiler / pump room can be seen here, in this bunker recessed into the side of the hill so as to be out of view from the house: 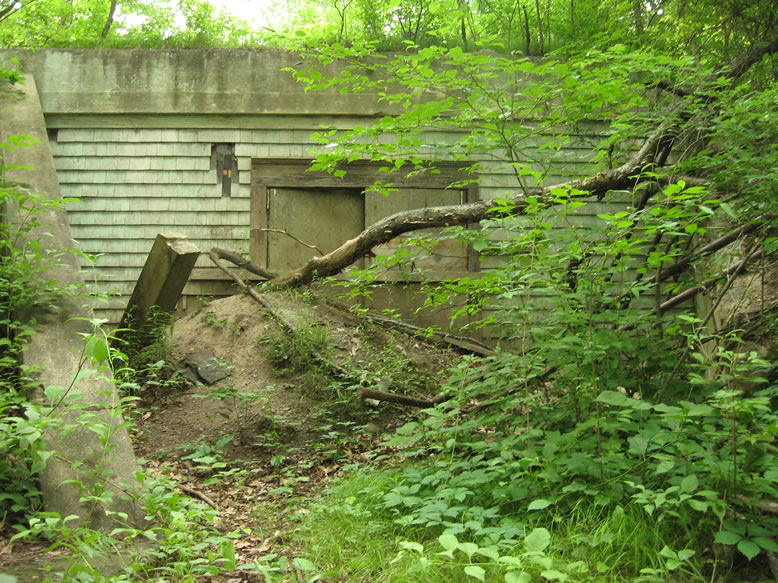 Here's a peek inside the bunker: 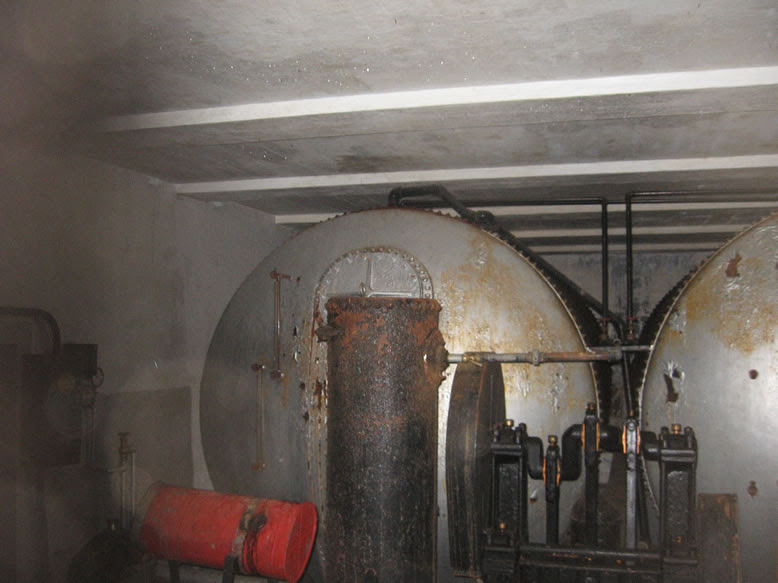 There was also a "carriage house," just a bit down the hill from the main residence, which had garage space for three cars, and living quarters upstairs where Edsel's chauffeur would stay: 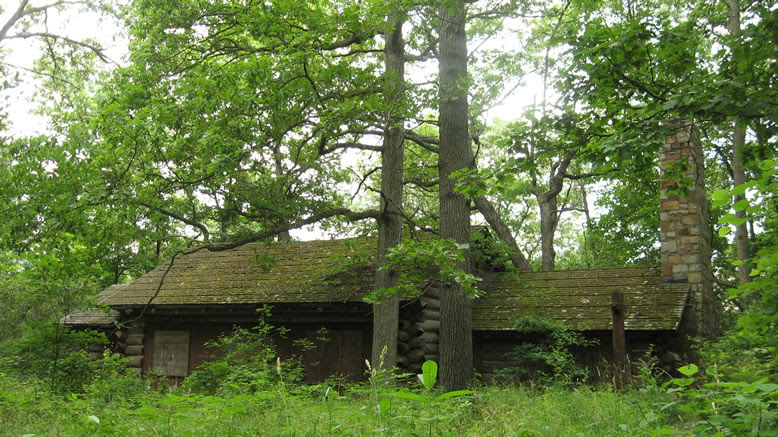 You have probably heard all kinds of wacky stories about the Fords' eccentricities, but here's another one for you. In order to give Haven Hill that "up north" feeling, pine needles were trucked in and scattered around its grounds on a regular basis for that fresh, piney scent. The estate was essentially self-sufficient and had a working farm, livestock, and Michigan's largest barn. For entertainment there was also a tennis court, a ski hill and toboggan run with motorized tow-lift, a horse track, and a fish-stocked lake.

Living room of the carriage house: 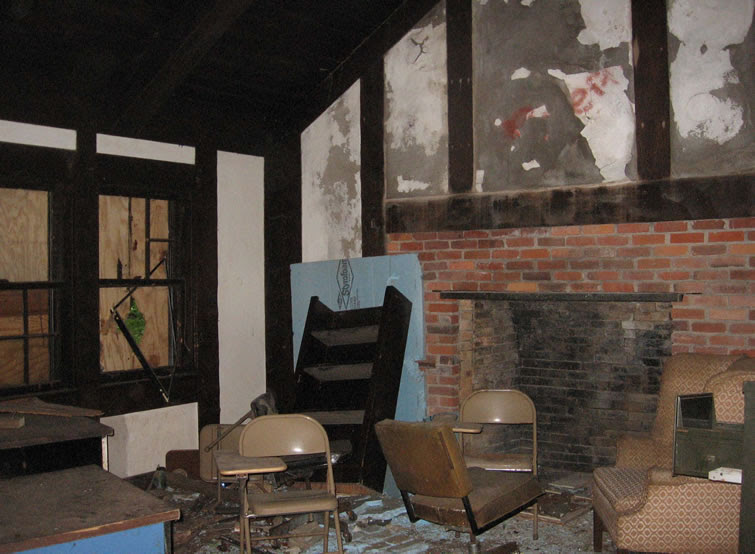 According to henryford150.com, Haven Hill was also an entertainment venue for the Fords, where they hosted many famous visitors such as Admiral Byrd, the Duke of Windsor, Charles Lindbergh, and Thomas Edison. Knowing how deeply involved Edsel and Eleanor were in the Detroit art scene, I wouldn't be surprised if several famous artists have stayed here too.

Upstairs in the carriage house, you can see the chauffeur's quarters have been ransacked a bit: 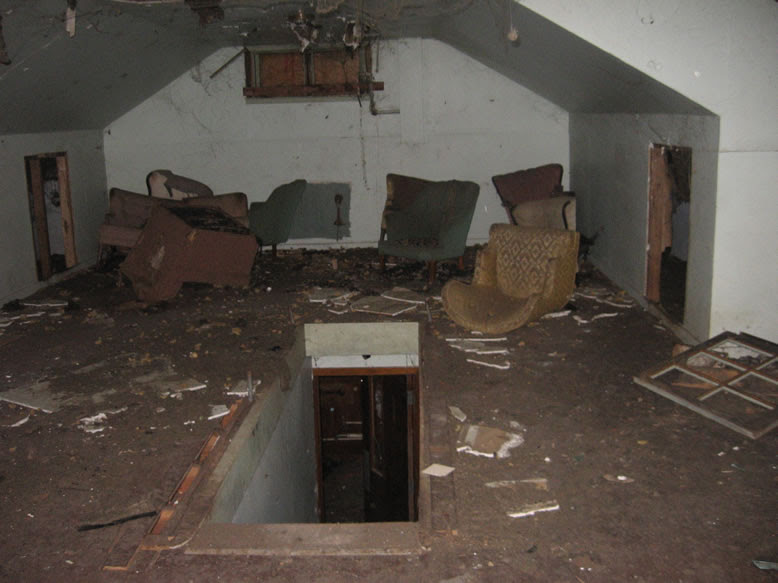 Eleanor Ford sold off Haven Hill to the Michigan Conservation Department in 1946 after her husband Edsel's untimely death, and it became the Haven Hill Recreation Area. In 1972 it was designated a National Natural Landmark, but in 1982 the complex was closed down, and began to deteriorate. The main lodge burned down due to arson in January, 1999.

When I visited in 2008, the ruins of the former lodge still sat high atop the hill, at the end of an old winding, overgrown road that had long been blocked off by the park. Only those who knew what was back there could still get up to Edsel's personal retreat and be amongst the ghosts of Detroit's storied past. This was my first time exploring the place; it was almost mind-blowing to go up there and wander the ruins of what was once the abode of the famous Edsel Ford. 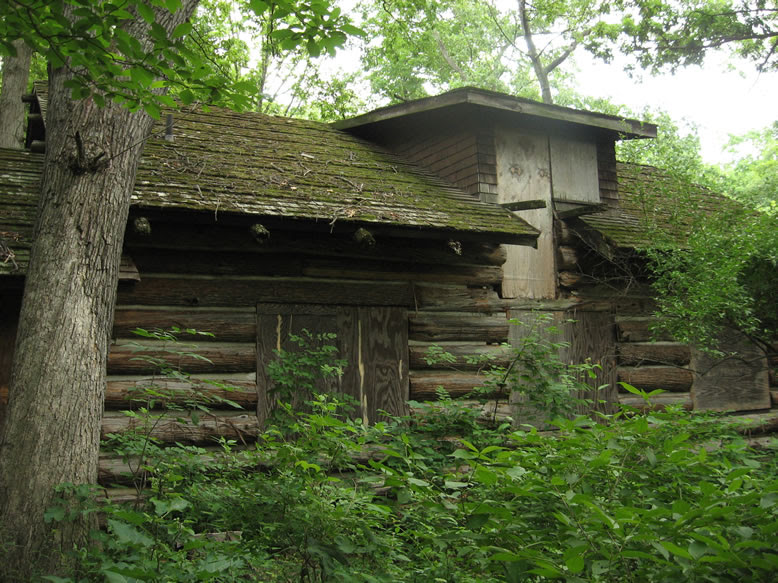 Edsel was the man who brought styling to the stodgy Ford car in the 1900s (in defiance of his father's wishes), he founded and named the Mercury division, he significantly strengthened Ford's overseas production, and was also responsible for the Lincoln Zephyr and Lincoln Continental. To us Detroiters, the Fords were our equivalent of the Kennedys or the British royal family. The Fords remain one of the richest, most powerful families in the world, and have provided the auto industry--and by extension, the Detroit area--with a face, a mystique, and a drama all our own. The Ford family possesses about as interesting and engrossing a biographical history as there is to be found–there is no shortage of books on it (which, sadly, is generally the case; that we are inclined to be more interested in the history of the rich, than that of the working class).

Henry Ford's beautiful estate in Dearborn, called Fair Lane, has been preserved and is in the National Register of Historic Places, and you can visit it. His old house in the Boston-Edison neighborhood of Detroit is likewise preserved, as is his farmhouse-birthplace in Greenfield Village, and Edsel and Eleanor Ford's Grosse Pointe mansion. Haven Hill however, had completely fallen through the cracks and been lost to time, and no sign or plaque stood to commemorate it or its famous owner when I first visited in 2008. 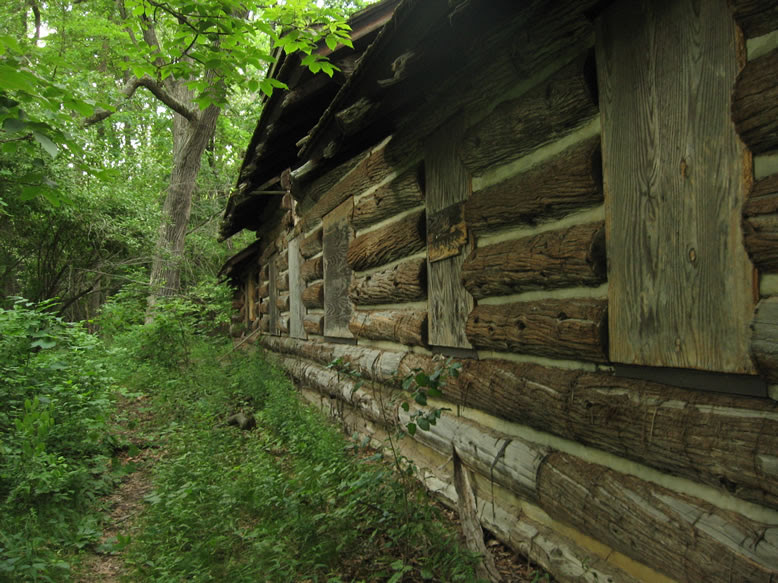 I went back to Haven Hill in July, 2010. To my surprise, the ruins had been cleaned up a bit! The overgrowth had been beaten back, and there were new interpretive signs telling you what you were looking at. The "Save Haven Hill" / Friends of Highland Recreation Area group is interested in rehabilitating the property for adaptive reuse as a public asset, and has been trying to make a connection between this site and its historic owners.

Besides Haven Hill, I have also visited the ruins of another prominent Detroiter's summer home, that of James Vernor II.


References:
http://havenhillproject.org/
http://www.dia.org/statewideservices/activities.html
http://www.henryford150.com/get-involved/haven-hill/
http://www.fohravolunteers.org/havenhillhistory/
A Home for Our Heritage: The Building and Growth of Greenfield Village and Henry Ford Museum, 1929-1979, by Geoffrey C. Upward, p. 50