I heard through some channels that there was going to be a members-only black tie type event at the old defunct Detroit Boat Club on Belle Isle, and of course I wanted in. 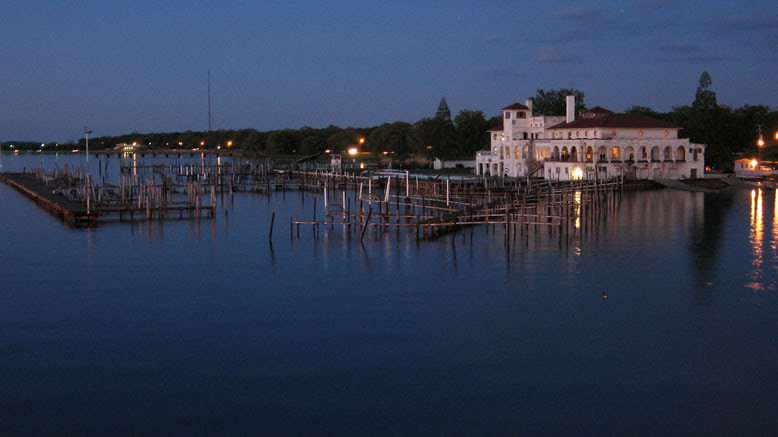 This was a place that I had been eyeing for years, hoping for a chance to sneak in and soak it up. It was a former high-society type club that sat on the shore of Belle Isle next to the MacArthur Bridge, but like most other fine institutions in Detroit, had succumbed to the fatigues of economic depression and a sea-change in the population makeup of the east side, where most of its members once resided. 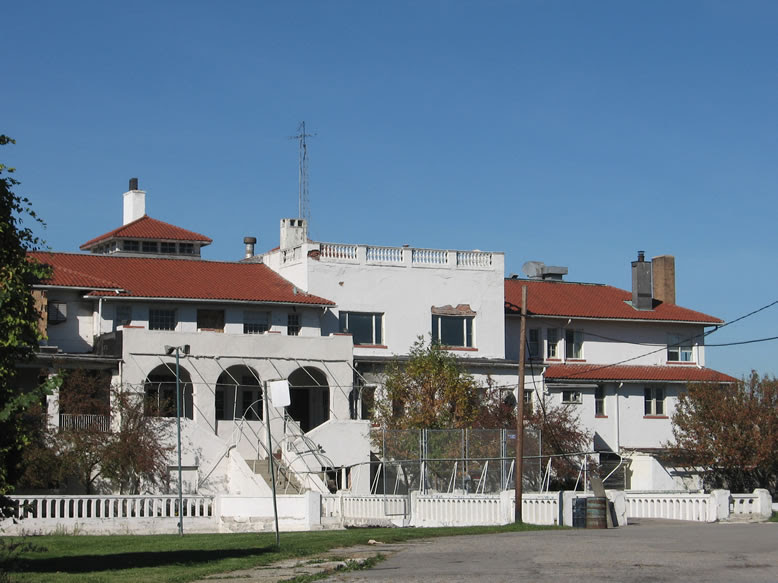 At the time it had been vacant and decaying for years, but thanks to the dedicated efforts of a few members, has remained safe from the vandal and the scrapper. Only money lacked to restore its former glory, but its day may be dawning once again. 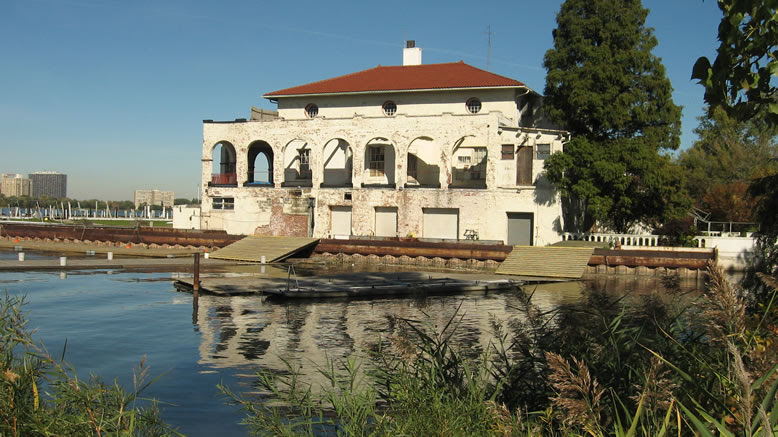 This was an establishment that relatively few had ever set foot inside of; the only way for a blue collar prole like me to have a prayer of being able to see inside would have been by invitation, I imagine. Back in the heyday if you were seen in here, you were probably somebody important...or knew somebody important. This leisurely "club lifestyle" was not for the average joe. 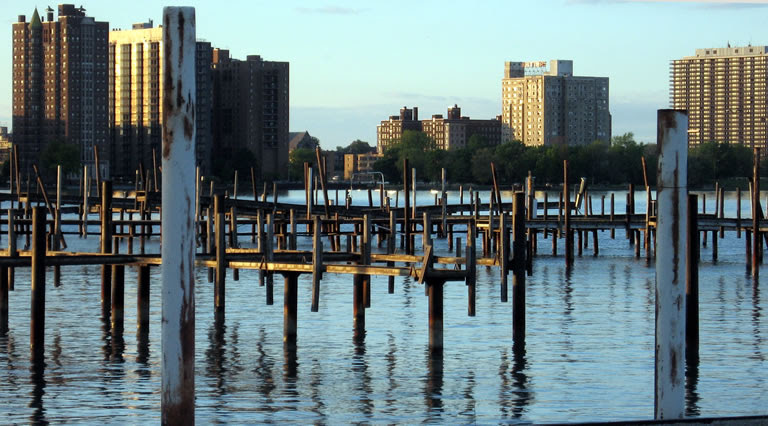 I donned my best attire, heaved a stressful sigh, and got in my car. I obviously don’t fit in with the Grosse Pointe set, and I was fairly certain that I'd be picked right out, though I tried to soften the culture clash as much as possible by dressing up, and practiced wearing a somewhat snooty countenance. Nonetheless I had to do my best, despite a nagging nervousness from the last time I'd tried to get into one of these types of things. It was so odd to see this place all lit up, and people about as if it were just a regular day. 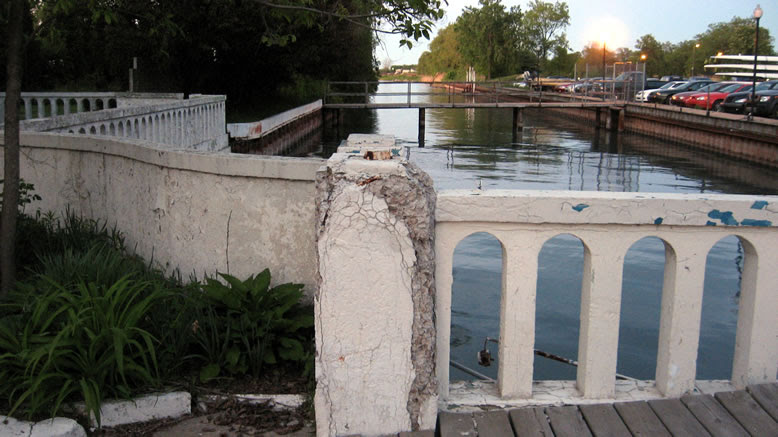 As I walked toward the footbridge that led onto the property across the small canal I tensed up, remembering how risky this always was all the times I tried approaching the place as an explorer. An Uncle Ruckus-type security guy stood at the valet hut, following me with his googly eye, but he did not interfere.

Ahead on the steps of the club I could see well-dressed members standing at the entrance with nametags. Were they the door people? I felt like I was telegraphing my lower social status like a bell buoy in a squall to everyone who saw me, so I told myself to be cool, and maintain. 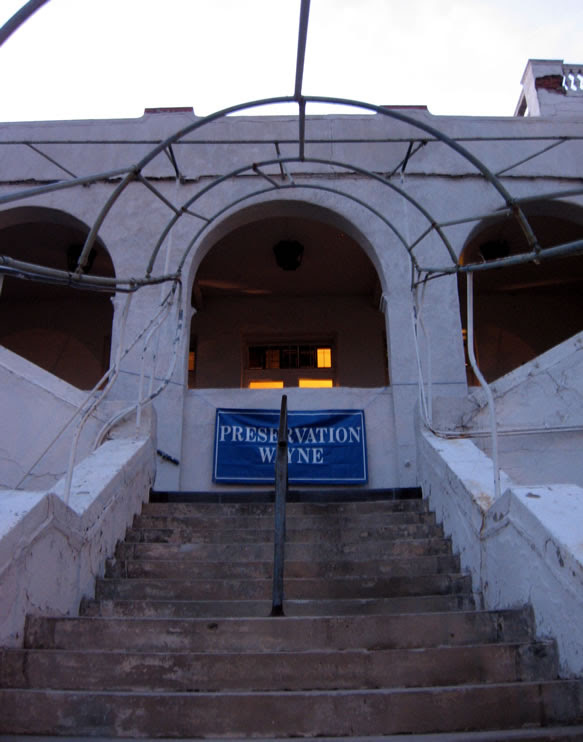 The moment of truth was seconds away...I slowly climbed up the steps and in, hoping that the camera in my back pocket wasn’t visible. Almost in tunnel-vision, I ambled toward the table with the lady who had the guest list. Briefly I noted how gorgeous (and remarkably well-preserved!) the interior of this joint was. "Hello sir, are you a member?"

Nervously and hoarsely I replied, "Uhh, ahem, I didn’t get anything in the mail, uhh–I uh, paid online." I knew from my recent bungle at the Dossin Museum that the Historical Society had membership cards you were supposed to present for admission to these sorts of events. "Oh, I see," the lady replied. "Then can I have your name please?" I held my breath. 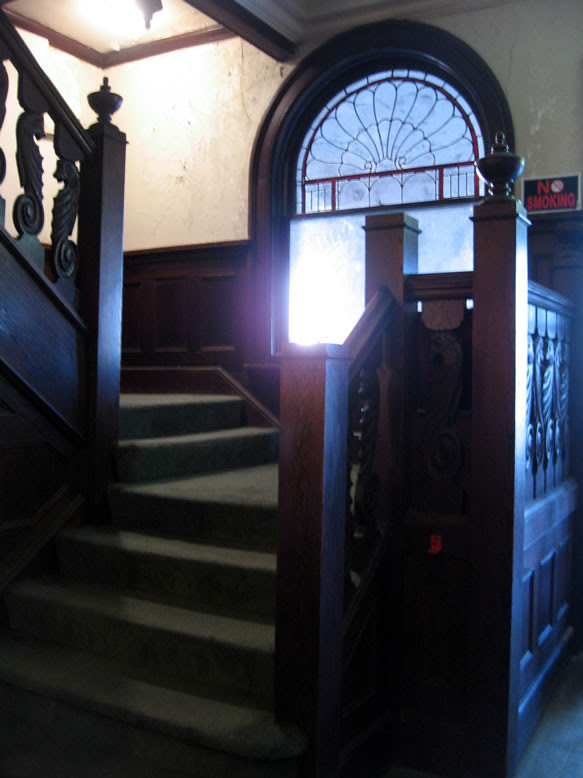 "Ah yes, here you are," said the lady at last, pulling a pre-made nametag out of the stack and crossing it off the list. 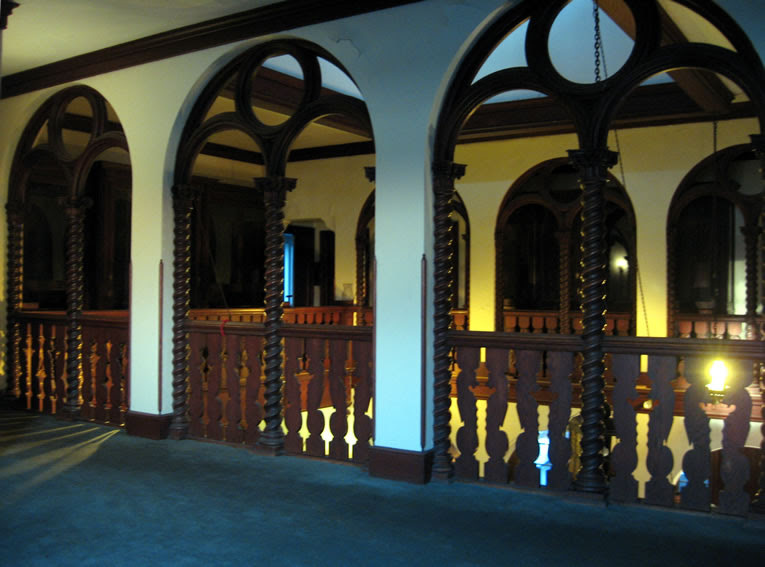 The only reason I wanted in here was to see the joint--even though I am in fact a member of Preservation Wayne and had every right to be here, I have no interest in these types of social events...not really my scene. I'd rather be doing real hands-on work. Shit, am I obsessing? Dammit. I don’t usually do this. 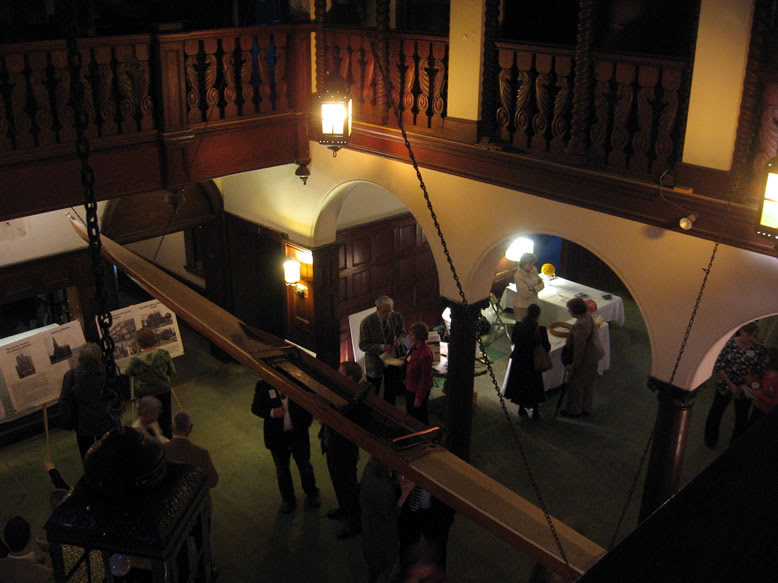 I tried to clear my head as I put the nametag purposely on upside down. It was hot out, and I was already sweating from these stupid dress clothes. A-ha...a room with people paying attention to a speaker giving a presentation. That should help me blend in. As I moved into the ballroom I noted once more how (unexpectedly) sweet the interior of this place was.

Notice the boat hanging from the rafters: 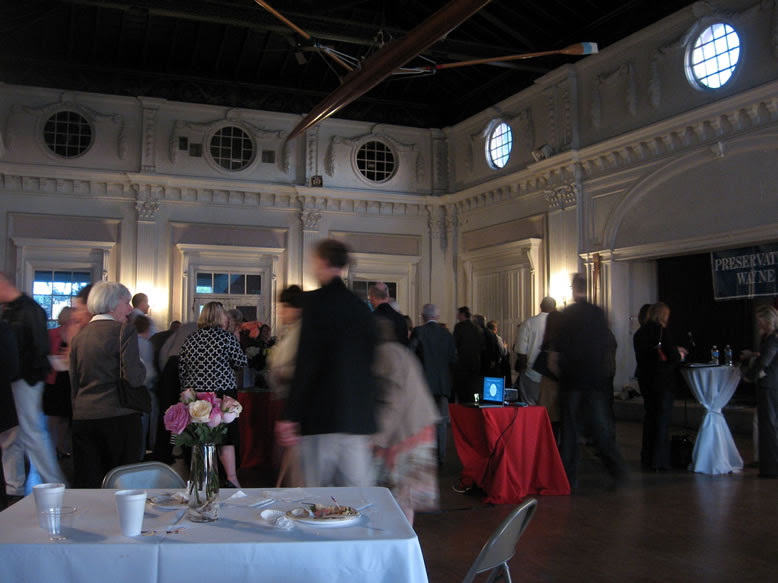 I found a wall to lean up against and tried to act like I was deeply engrossed in the slideshow. It was about various vacant buildings around town that were crucial in the preservation effort. As the slides flashed, I couldn’t help but note that 90% of them were buildings I had been in before. 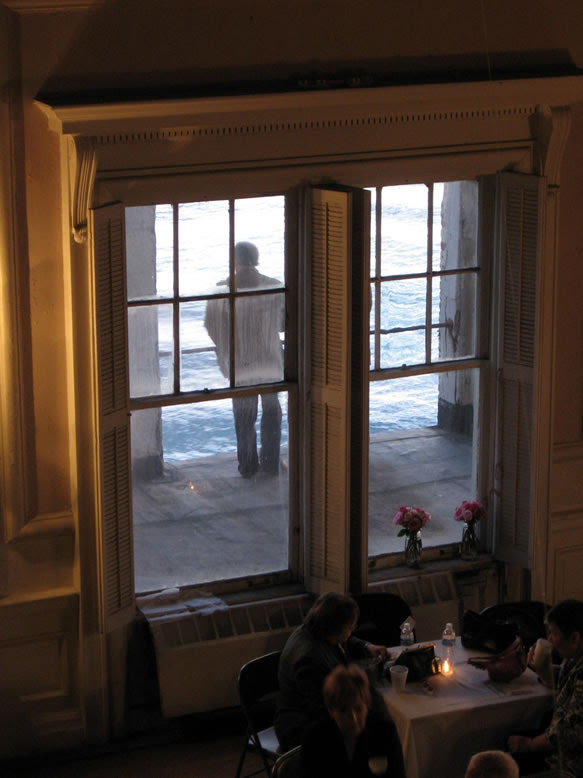 A caterer moved near and offered me an hors d'oeuvre; I looked down at the tray of unidentifiable matter and quickly shook my head to whisper "no thanks." On tables around the room were various things up for silent auction...old photos of MCS, random chunks of decorative terracotta, antique Vernor's bottles...I thought to myself that I could probably hold a similar auction with all of the cool shit I've looted from buildings, or chunks of demolished ones I've swiped. 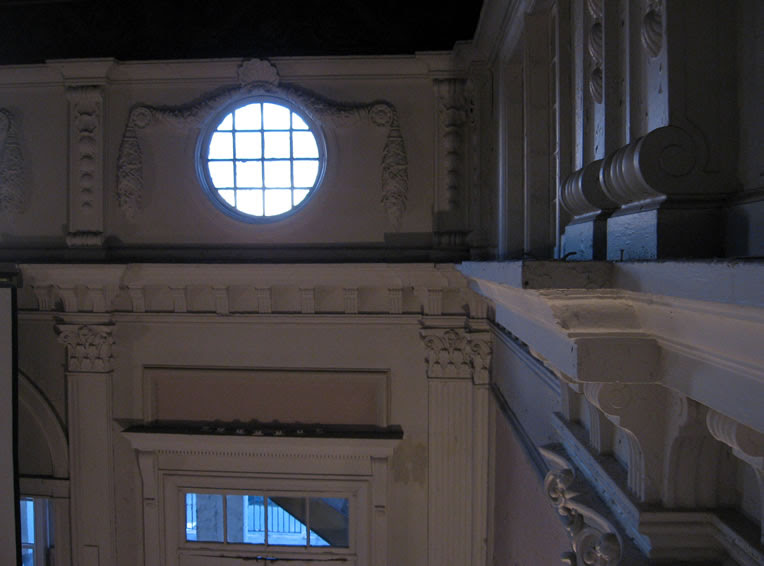 My attention drifted around the room, and unavoidably back to the gorgeous room itself time and time again, though I nervously kept scanning the crowd. I guess there was some alright people-watching here at least. 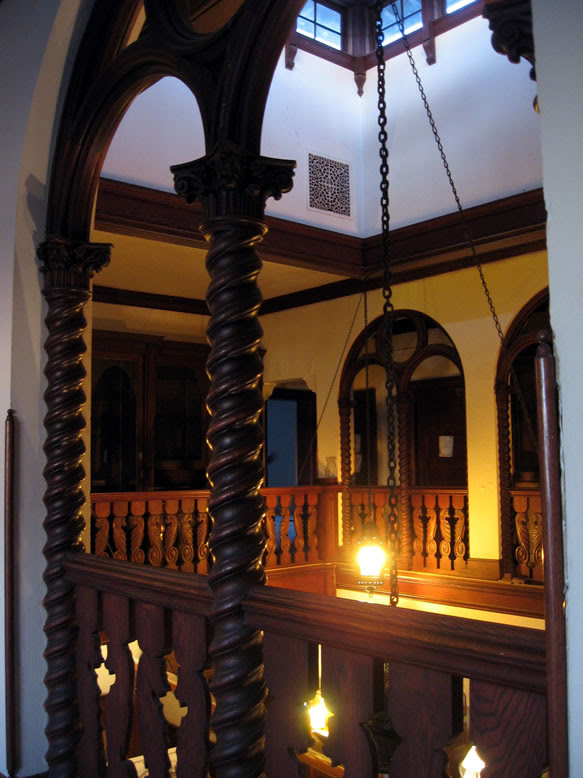 I adjusted the folds of my dress shirt to where it was hiding half of the upside-down nametag. Maybe I should go out on the portico. 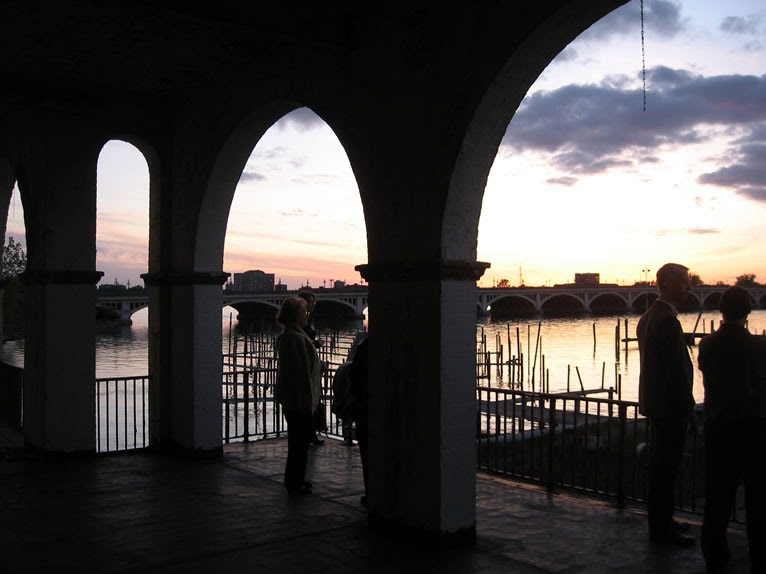 According to its website, The Detroit Boat Club is the oldest nautical-related club in the United States...


Organized by oarsmen on February 18, 1839, it is the oldest continuous rowing club in the world, The oldest boating club in the United States and the oldest social club in Michigan. The Club had five clubhouses at several locations in the Detroit area before it built the fireproof one that opened on Belle Isle on August 4, 1902. The Club remained there until February 23, 1996 at which time they elected to look for a new home.

I'm guessing they had a 90-yr lease on the property, since in 1992 their rent jumped from $1 to $100,000. The club announced a couple years later that they were bankrupt, with a $1 million debt, and today they are holed up in Grosse Pointe Park. The structure here on the Isle was dedicated in 1902. It was designed by Detroit architect Alpheus W. Chittenden, who was also a member. 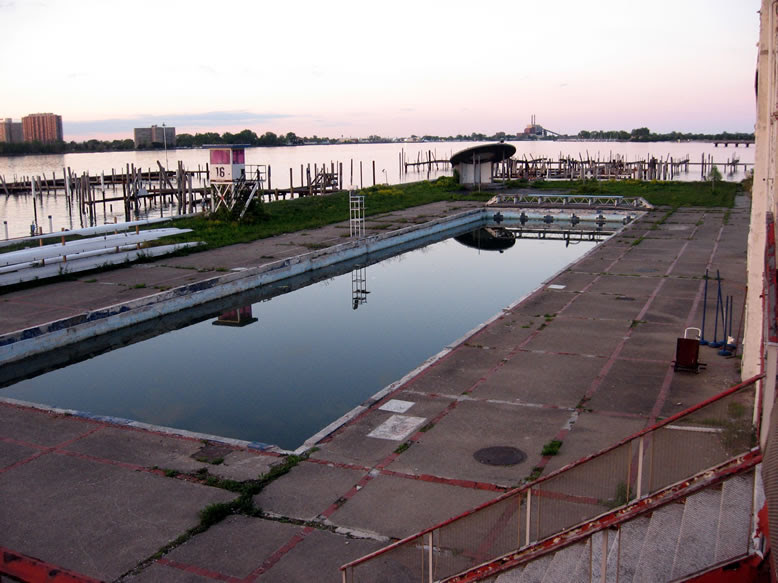 Out behind the club were two swimming pools, and a small amphitheater. 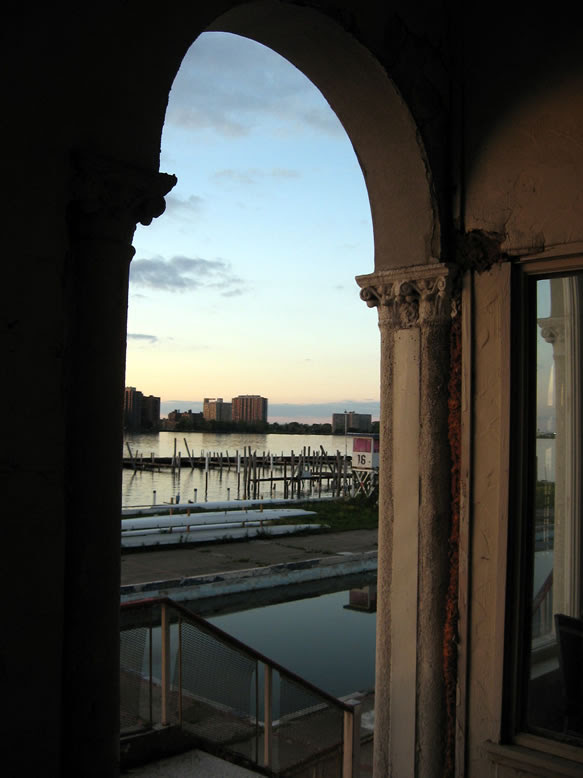 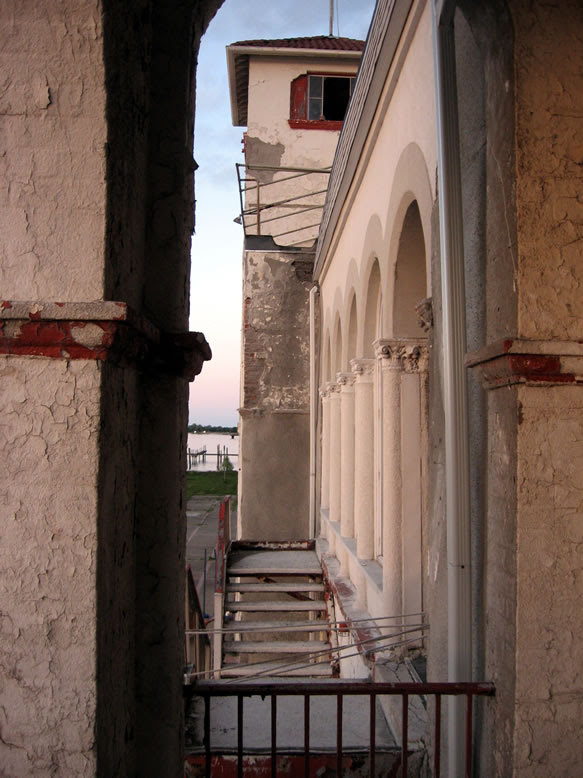 The club has won fame in hundreds of races and competitions (including the Olympics) throughout the decades, filling its annals with plenty of lore. I half expected the walls to be crowded with tarnish-darkened trophies and antiquated memorabilia from when Col. Noseworthy III, Esq. or some other dashing, muttonchopped gent had won some long forgotten glory in a more gilded age that no one now remembers. 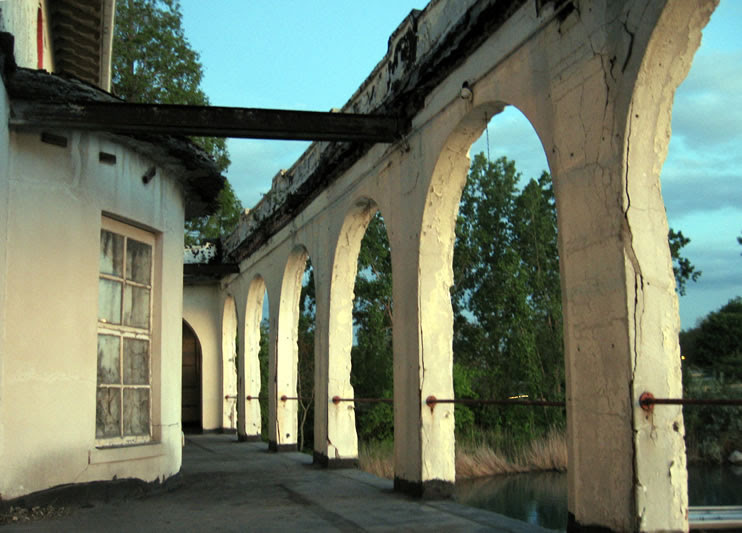 As the sun went down on the river, I soaked in the mellow colors of the twilight and the glowing lights of the east riverfront. This was certainly one of the chillest locations in Detroit, and it felt strangely satisfying to finally see what was on this side of the canal. 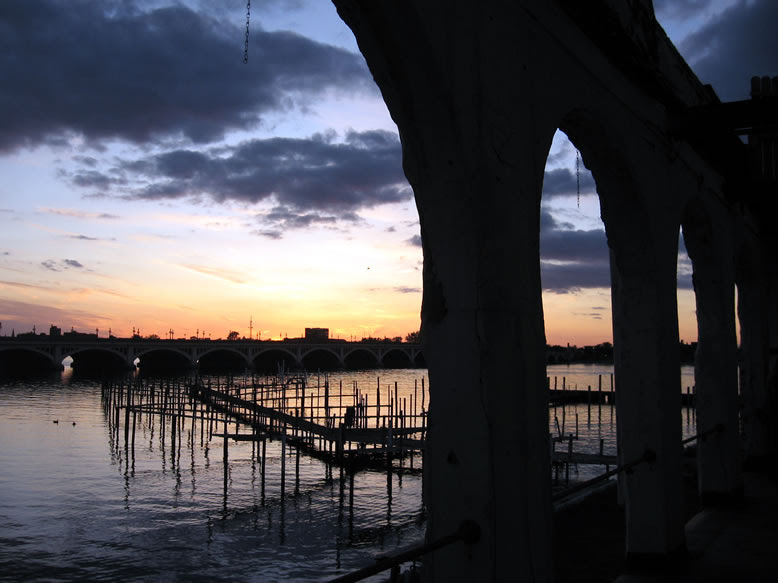