One day as I was traveling along M-60 through the town of Homer in Calhoun County, I saw a park with the ruins of a dam along the South Branch of the Kalamazoo River, and decided to stop. 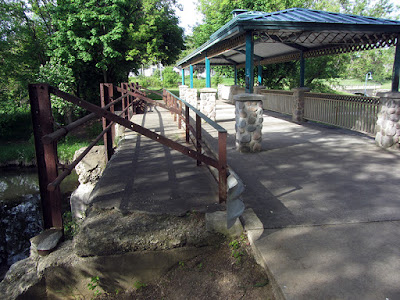 This was the site of the old Cortright-VanPatten Gristmill, also sometimes just referred to as the Homer Mill.

David M. Brown visited the mill back when he was compiling his Michigan County Atlas in the 1980s. He says that the area was particularly favored by the local Potawatomi people, who were friendly to the first settlers of Homer, but they were soon forced at gunpoint to walk the Trail of Tears. The first building was erected in 1832, and the first mill opened on this site in 1837—the same year Michigan officially became a state. 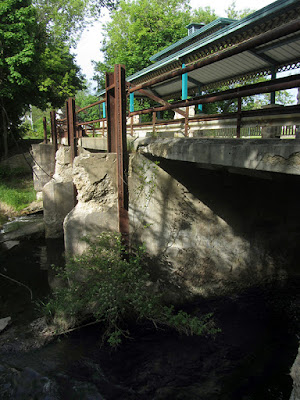 Calhoun County itself was organized in 1833, and although it was named after John C. Calhoun and settled in the Puritan tradition of "righteous" colonization, Brown notes that it ultimately came to stand for much more progressive ideals, such as: developing the first state-wide education system, helping pave the way for the abolitionist and women's rights movements, founding the first railroad union, and the invention of the first healthy breakfast foods—giving Battle Creek its world-famous title of Cereal City. The county seat of Marshall is today known for its reputation of historic preservation, and its intact collection of mid-19th Century homes.

You may recall my older post from Calhoun County, about the ruins of Clark Equipment and the United States Register Co. in Battle Creek. 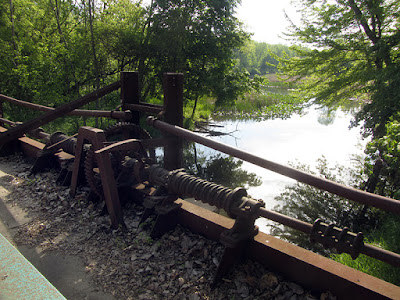 This mill was erected by C.C. Cortwright in 1887, built atop the ruins of Milton Barney's c.1837 mill that burned down in 1886. It was bought by H. VanPatten in 1940. The Historic American Engineering Record (HAER) says that this mill was framed with massive oak timbers on a rubble foundation, and topped by a mansard roof; an addition was built in 1913. In 1976 when the HAER agent visited the site it still had its two original Leffel turbines intact, as well as the bearings and lineshafts. Even though all of the other machinery had already been removed, the mill was placed in the National Register of Historic Places in 1979.

This photo below by Joe T. Fletcher shows what the mill looked like before it burned to the ground in 2010:

The Lower Michigan Paranormal Society actually has a fairly well-researched looking webpage for this old mill, which stopped milling flour in 1970. It was bought in 1974 by James L. Miller, who turned it into a successful dinner theater establishment. The building was most recently bought in 1991 by another restauranteur, which is when it also became part haunted house; it operated as a haunted themed restaurant and bar, and functioned as a haunted house during Halloween. Apparently shock rock icon Alice Cooper even approved of this business model, making occasional appearances at the mill. Sounds like it must have been a pretty good haunted house... 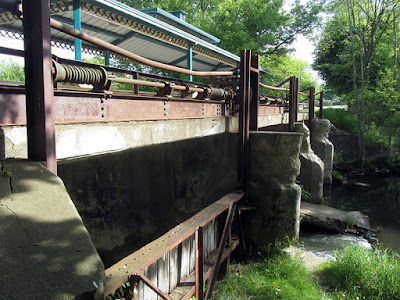 I wonder if any of the ruins at the site today still date from the original 1837 mill? 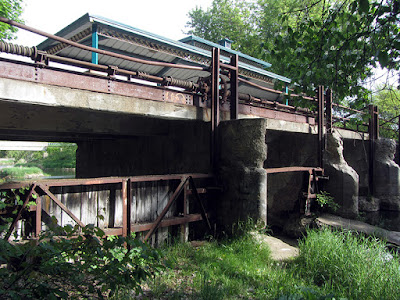 The Lower Michigan Paranormal Society also claims that a young boy and girl died here (although it is not stated what year this allegedly occurred) while swimming in the river, after being sucked into the mill and drowning. Their ghosts supposedly haunted the basement and grounds of the mill prior to the fire that destroyed it in 2010. 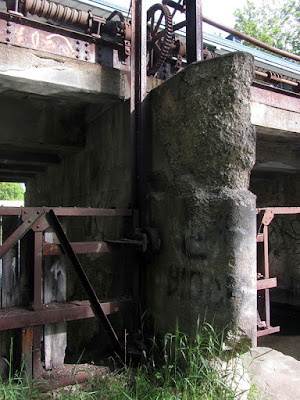 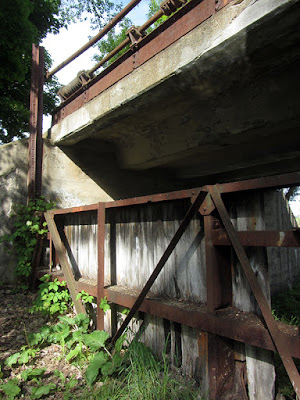 Another ghost story claims that a mill foreman also once died here after falling into a silo of grain and suffocating to death. Yet another even less substantiated legend is that the wife of one of the mill owners once hanged herself upstairs. 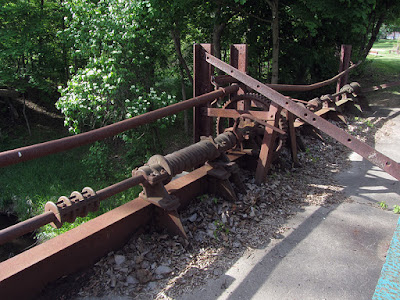 I applaud the town of Homer for continuing to embrace the ruins of the site with a park even after the catastrophic fire destroyed the mill. 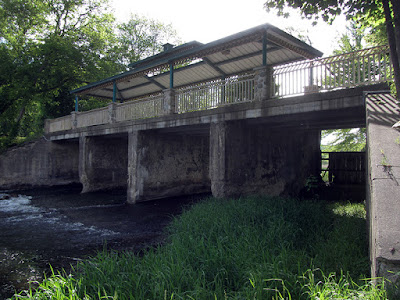 As I've stated in other posts, ruins and old buildings are an important part of the fabric of any good town. They are teachers and reminders, and should not be cleared away simply for the sake of "clearing the way," as the cliché terminology goes. 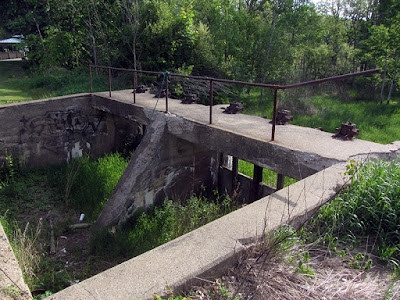 Children shouldn't grow up in towns where the oldest building is the same age as their parents...I think the American obsession with modernity is a bit misguided, and perhaps a symptom of our subconscious penchant for forgetting our nation's not-always-pleasant history (like sending the Potawatomi on the Trail of Tears, for instance). Growing up amongst completely modern, sterile surroundings leads to a shallow understanding of history...which leads to a shallow understanding of the future.

Ruins should be built upon, if not preserved as-is for their own sake. But enough of my preaching. 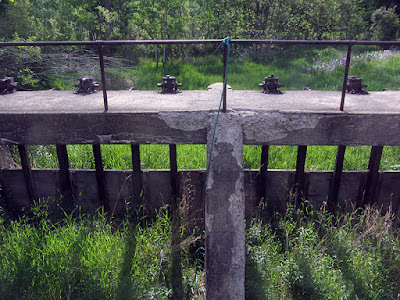 I wandered around some more and checked out the other ruins. I guess this was part of the mill's spillway? 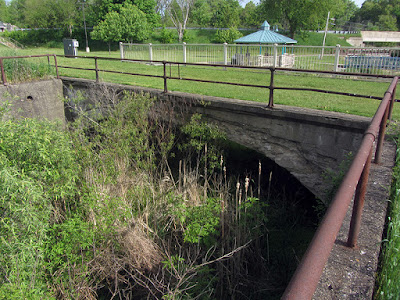 I continued up to M-37 on my journey across Calhoun County.

North of Battle Creek I saw the charred remnants of what had to have been another old mill. I just can't seem to catch these things before they go up in smoke, can I? I mean this thing was practically still smoldering... 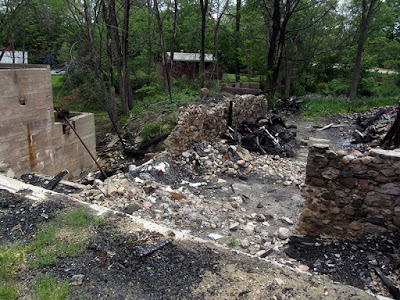 This was the old Payette Mill in Bedford, which some a teenager had "Cleansed by Fire" the previous July. It too was featured in the Historic American Engineering Record, which says that it was built in 1855 on the Walbascon Creek by H.M. Marvin. It changed hands many times over the decades but was owned for 50 years by the Payette family, from the 1880s to the 1930s. Like the Homer Mill, it became a restaurant in 1950 and then an antique shop and private residence. It had been vacant for awhile prior to the blaze. 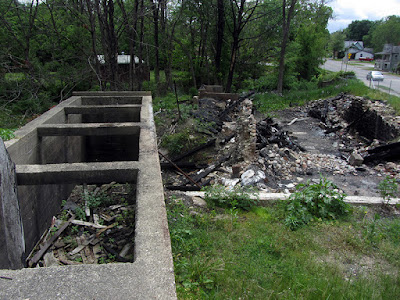 There sure aren't too many buildings left from the 1850s anymore, and now there is one less, thanks to this apparently troubled kid. According to the news reports, the same 19-year-old had already been apprehended for attempting to burn the mill down once, just weeks prior, and was released on bond. No clear motive was discovered as to why he did it, and he was charged with felony third-degree arson. 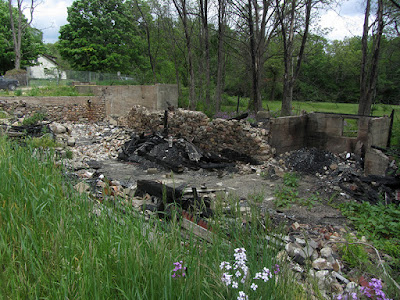