Age Is No Handicap

Normally when I research a factory it becomes clear pretty quickly what the primary address of the facility was, and it usually points to the plant's front office building—in the case of the Detroit Insulated Wire Co., neither was true. Almost every mention of the company in books or newspapers referenced the intersection of Wesson and Albert (Nowak) Streets rather than an address. It took a long time to figure out, but the only real address I ever saw the place referred to by was 4647 Wesson, which was not the front office, but one of the warehouses on the corner. 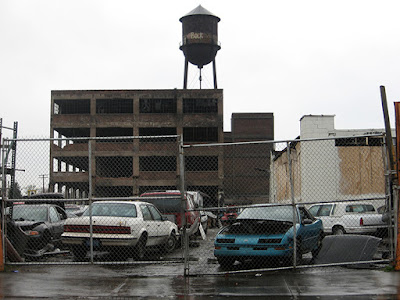 In 1906 under the supervision of Reuben Sloan, superintendent of the Solvay Process Works, the first buildings of this factory were built on the site of "the old west side brick yard," with the bottom of the old clay pits "forming a solid foundation" according to an article in the Detroit Free Press. I'm not sure why Solvay was involved in this, but that's what the article said.

The c.1897 Sanborn map shows this block as empty land, and by the c.1910 map, only one building was erected, right on the railroad spur. A city atlas from 1885 corroborated this being the site of an old brick yard. 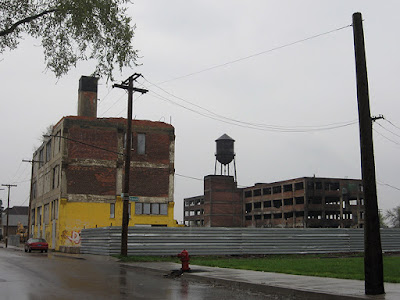 The three-story office building (seen at left, above) was built in 1920, while the big four-story concrete structure wasn't even built yet on the c.1924 map. Most of the complex was made up of single-story buildings with shed or "sawtooth" type roofs.

Detroit Insulated Wire Co. was organized and incorporated in 1906 by ex-Pittsburghers who came to the conclusion that Detroit was the ideal place to put a copper wire factory due to its proximity to the copper supply chain, rail and waterway shipping, and a ready labor market. They started small, just making wire for "code and telephone" cables (I assume "code" means telegraph use). They eventually expanded production to include wire gauge sizes from as fine as a strand of silk to as large as two inches in diameter, most of it insulated with rubber coating. Many of their products were used in the automotive industry as well, and they were covered in cambric varnished tape and saturated varnished braids. They also produced "armored" wire cable, which I presume to be the old-timey equivalent of today's "Greenfield," which is a flexible metal conduit. 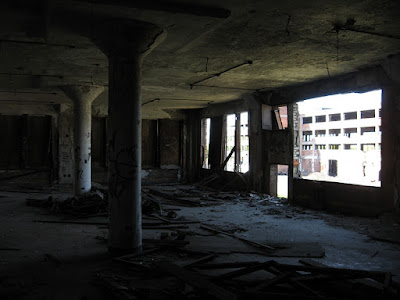 The article said that Detroit Insulated Wire Co.'s products could be identified by the presence of three uncolored threads laid parallel between the rubber insulation and the braid. This company was the only one of its kind in Michigan, and only one of three west of the Alleghenies. It had nonetheless become the largest exclusive manufacturer of rubber insulated cables in North America, with an output of a million feet of wire per day.

Detroit's position directly along the export route of pretty much all raw industrial production copper in the world made it a natural place for a wire-making firm. So it's a wonder this was the only one, seeing as every other manner of malleable metalworking firm has existed here since copper was first being mined in Upper Michigan by white settlers in the 1840s. 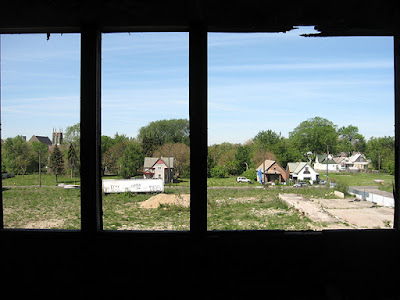 Detroit historian Clarence M. Burton wrote that Mr. Hunter was hailed as a leader amongst the men of industry called to Washington D.C. in WWI to help aid the war effort, for his idea in distinguishing different branches of the Signal Service on the French front. Hunter held a few patents for electrical appliances, and also had a keen interest in photography. 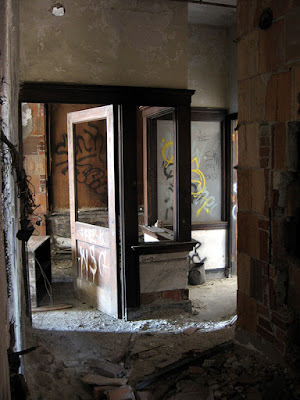 In 1913 the plant's floor space was 60,000 sq.-feet, and their products were known "from Canada to the Panama Canal" according to the Michigan Manufacturer & Financial Record that year. They also had bowling and baseball factory teams. In the 1920s the plant employed around 350 people. 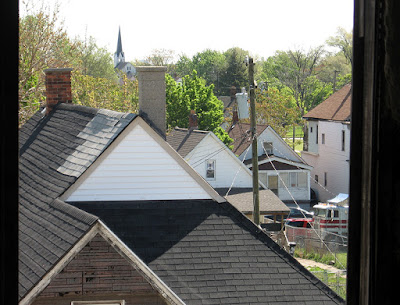 Having been a one-time electrician myself, and having spent plenty of hands-on time working with vintage wiring from this time period while restoring my c.1887 house, I'm familiar with this type of insulated wire. It's amazing to me that this stuff is still around in houses that are still lived in, and it is still being used for electricity, over 100 years later. Left alone, it can function admirably for a very long time, but as we handymen know, rarely is anything in a house that old left alone.

Usually when you find this stuff in a house now, it dies when you touch it. The "rubber" insulation crumbles like hard clay, and the ends of the copper conductor have become so fatigued with being spliced and re-spliced over the decades that it is unworkable and prone to breaking. To say nothing of its other inadequacies and dangers. That said, when I bought my c.1887 house, that is the type of wire that was in active use for electrical service...I painstakingly replaced all of the "knob & tube" circuits with new wiring that I *hope* will last as long. 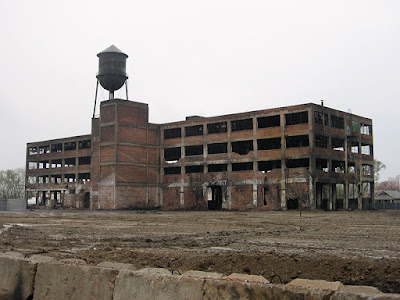 Thanks to the magic of Google Books, I was able to learn something more about Detroit Insulated Wire. The 1973 Senate hearings on the Industrial Reorganization Act regarding the Communications Industry in revealed that prior to 1930, the Bell System met all of its insulated wire and cable needs from seven different suppliers to Western Electric, of which Detroit Insulated Wire Co. was one (the other cable suppliers were all based in New York, Massachusetts, or Connecticut). So in other words this ragged factory most likely helped supply the grand construction program that facilitated the linking of the United States by telephone at the dawn of the Technology Century. It produced telephone cables not only for Detroit, but most likely for greater Michigan and the Midwest. 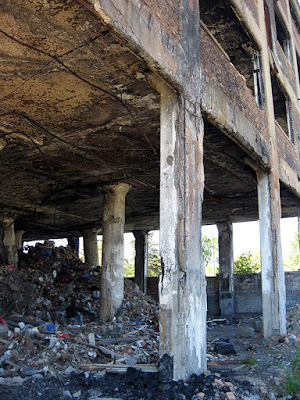 After 1930 however, all of the Bell System's wire and cable was manufactured by Western Electric, and all other supply contracts were cancelled. As a result, all of the former wire suppliers were out of business by 1935, except Whitney-Blake and General Cable Co. Mr. Hunter sold the Detroit Insulated Wire Co. in 1932, to General Cable Co. of New York. Production of wire most likely ceased at that time, because the next occupant of this facility seems to have been the Great Lakes Thread & Yarn Co., judging from a help wanted ad from May 1934.

That company remained here until at least 1944. Other help wanted ads during WWII called for men with machine-operating experience for war work, declaring, "Age is no handicap." Great Lakes Thread participated in war production, and also participated heavily in the drives for war bonds. I don't know what exactly the company may have produced for the war effort, perhaps things such as military uniforms, vehicle seats, backpacks, or tents? 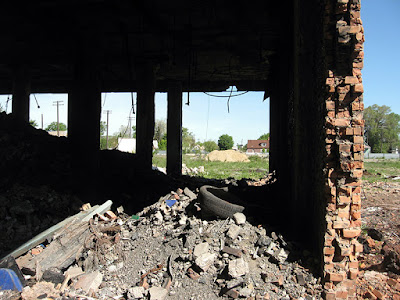 Later news blurbs in 1955 and 1961 seemed to imply that the Cadillac Motor Division had been using the plant, so possibly the facility was split between them and Great Lakes Thread? Cadillac said in 1961 that it would discontinue manufacturing of army tank transmission parts at this plant by mid-June. Due to the low volume, the work would be taken over by GM's Allison Division, for which Cadillac produced the parts. Sixty-five men worked here under Cadillac, and the future of the plant itself was not decided yet at the time of the article. 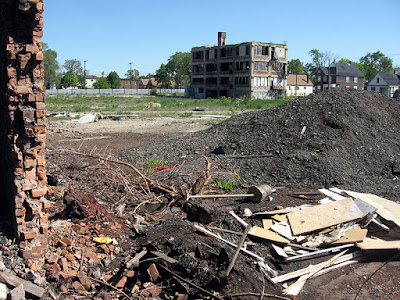 Cavemonkey, a colleague of mine from Colorado who is also a WWII buff tells me that if Cadillac was using this plant for manufacturing tank transmission parts, it would have been for the M5 Stuart and later the M24 Chaffee tanks. As a matter of fact, Cavemonkey was with me the day I explored this factory. Cadillac also produced Allison aircraft engines in Detroit, so that could have been done here as well, he said. 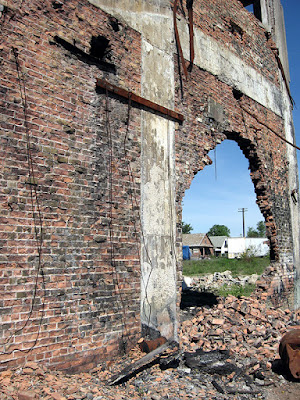 Meanwhile, another entity had moved in as well, as evidenced by a help wanted ad for a printing press operator in 1955. I believe that this is when the Catholic Archdiocese of Detroit came to own at least part of the factory. The Bible Press Company was listed here from about 1955 to at least 1962, and the Church and School Equipment Co. was listed here from at least 1961 to 1965, both of which were in some way affiliated with the Archdiocese, which owned the property. Ads in newspapers offered products from these companies, including tubular steel folding chairs, tape recorders, and "Cathedral Hi-Fi Tape," as well as a "catalogue of over 900 Redi-Recorded tapes."

From then until the 1970s I was only able to come up with one other tenant for this building, from a help-wanted ad for a machine repairman that was posted in the May 1970 Free Press, indicating it was then occupied by the Detroit Parts Warehouse, Inc., which seems to have stocked automotive parts. 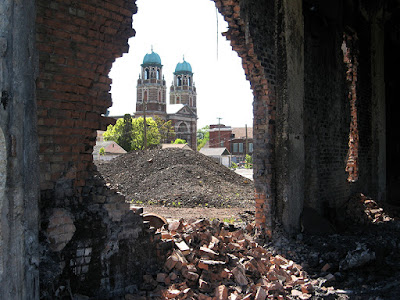 It looks like the firemen employed heavy equipment to bash holes in the walls to get water on the blaze. The church seen above is St. Francis d'Assisi, a once large Catholic parish for this once densely Polish neighborhood. It was built in 1903, making it three years older than the plant. I have been inside the church, maybe one day I will post my pictures. They have a very decent fish fry (and homemade pierogi) during Lent. 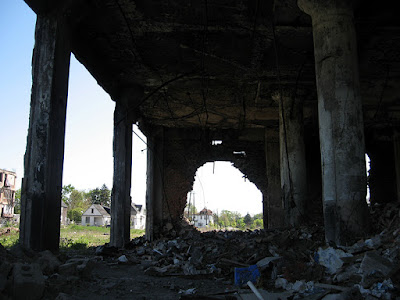 You may recall that I also explored the abandoned firehouse of Detroit Fire Department Engine 22 nearby, in an older post.

This factory complex met its doom on October 16, 2005, in one of the worst fires in Detroit's recent history. These days the Detroit Fire Department rarely calls out five alarms, even for fires that other cities would consider cataclysmic, but this one merited all five bells (you may recall that the old Studebaker Plant #5 was also destroyed that same year by a five alarm blaze). Had the old Engine 22 firehouse—which is less than two blocks away—not been abandoned, it is likely that this factory may have had a different fate. 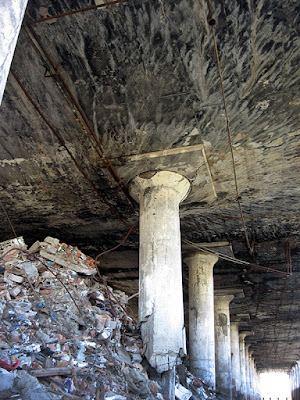 This entire complex was annihilated by burning plastics and other troublesome fuels...the thing about plastics fires is that they really don't want to be extinguished once they start burning. And with Detroit's notorious issues with non-working hydrants and low pressure, it's a miracle the fire was put out at all. I remember the day it burned...I happened to be driving on Warren Road, over 20 miles to the west, and I still saw the towering column of black smoke rising from this disaster scene as if it were just a few blocks away. 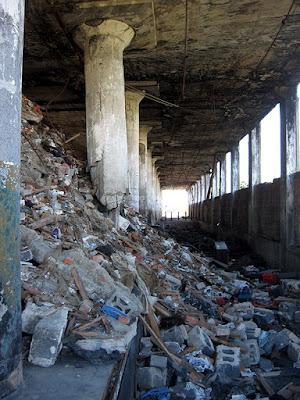 I did not explore the upper levels of this factory; after viewing the completely crumbled condition of these support columns, I decided that there couldn't be much on the other floors that was worth my life to see. Of course, the building proved to still be much sturdier than I calculated...I thought the place would collapse if I farted too loud, but even in this condition it remained standing another decade. Reinforced concrete is incredibly hard to defeat. 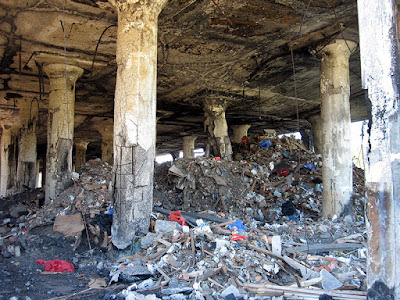 The building was still owned at the time of the fire by a Bloomfield Hills-based company called Intermet, which had been cited often by state officials on storage of tires and other waste, going back to 1993. Intermet paid no fines at the time because the violations were corrected, according to the Free Press. Intermet owner Julius Rim expressed remorse to reporters that the fire had occurred, which sent noxious smoke into surrounding neighborhoods and cost the taxpayers plenty of money to extinguish. Intermet was an automotive supplier for Ford, Delphi, and Daimler-Chrysler, making brake and suspension parts, and they had just filed for Chapter 11 bankruptcy exactly one year prior to the fire. 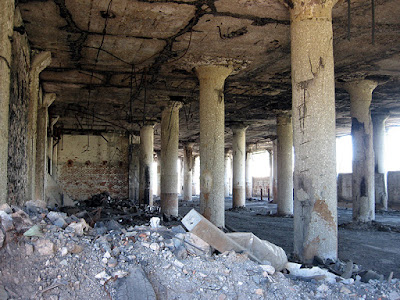 Fire officials stated that the fire was fueled by propane tanks in the buildings, as well as mystery drums of unknown liquids, and old junk cars. The fire started in a single-story warehouse-turned-junkyard, and then quickly spread to a plastics company in the taller building. 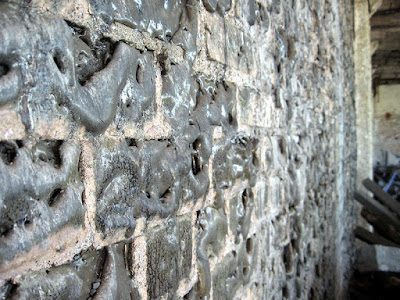 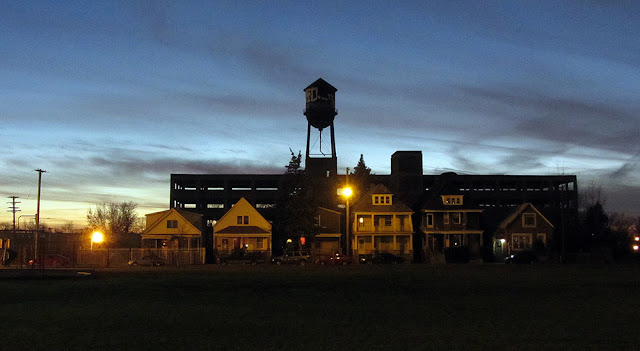 The remaining ruins of the plant were torn down by 2017.