Choose Your Own Adventure: "The Belleville Mystery Ruins"

One morning I was out walking around in southwestern Wayne County, and a certain patch of woods called to me... 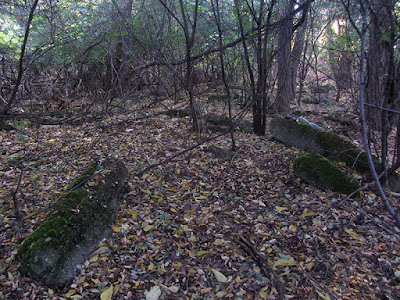 This just goes to show you that behind every little clump of trees, something interesting could be hiding. Pretty quickly I realized that most of this small wooded area was hiding rubble from some large concrete structure that had once stood here. Apparently my spidey senses are sharp indeed. 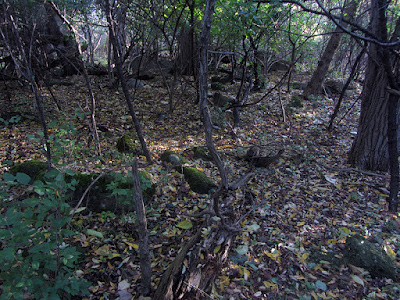 I tried briefly to research what might have been here at one time, but without any real leads I didn't find much. Without a name or address to go on, Sanborn maps are pretty much your only hope of learning anything, and the Sanborns of this area were not accessible on the Detroit Public Library website; the date range I was looking for wasn't available either.

So just like those classic "Choose Your Own Adventure" books we read as kids in the 1980s, it seems as though you and I are going to be exploring this one together, dear reader. You know as much as I do this time, so choose your steps wisely, partner—I am depending on you! 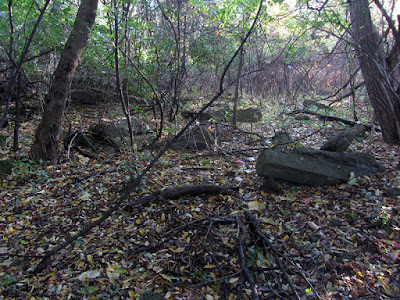 What I do know is that Henry Ford owned this land from about the 1940s onward, and it is still held by Ford Motor Land Development Co., but whether it was once part of Henry's Cherry Hill Farm nearby, I can't say for sure. It seems possible, since it is on the edge of what is still farm fields today. It could also be possible that it was once associated with Willow Run Airport, to which it is adjacent (and which was also owned by Henry Ford in 1941). I still have no idea what the structure might have been, but some of the concrete chunks are pretty big for a farm structure, though.

To investigate some curious objects on the ground ahead, turn to page 8. 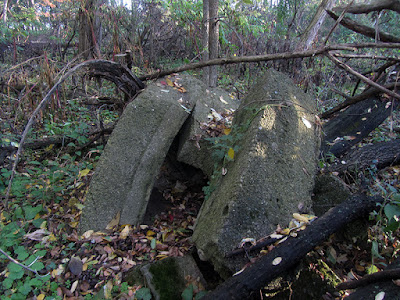 We found an assortment of old bottles under the leaves, ranging to about a century old. I arranged them on a mossy rock for inspection: 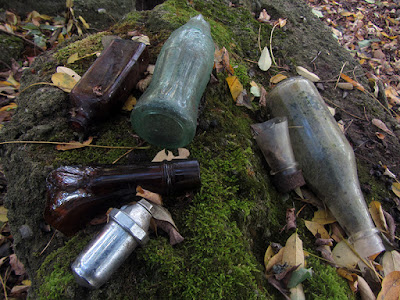 This little chrome doodad (at the bottom left) says "Ventrite," on it, and is a condensation valve like you might find on an old steam radiator in your house: 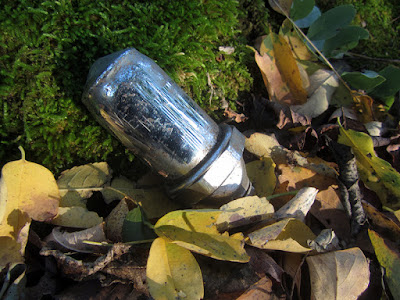 There were also a lot of old oil cans and such, making me think this may have been some kind of garage. But then again, this bottle was labelled "H. Clay Glover Co.", which specialized in making veterinary medicine in the 1800s and 1900s: 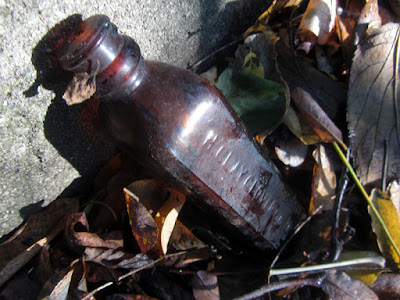 Some of these concrete chunks resemble steps from a stairway that may have been broken up: 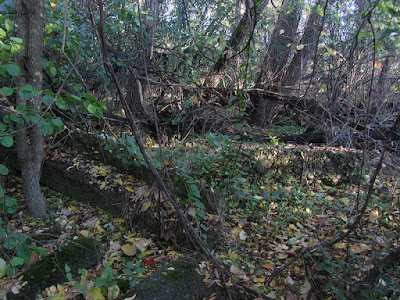 The crisp October morning air made this leafy little glen smell terrific. If you want to head deeper into the woods, turn to page 11. 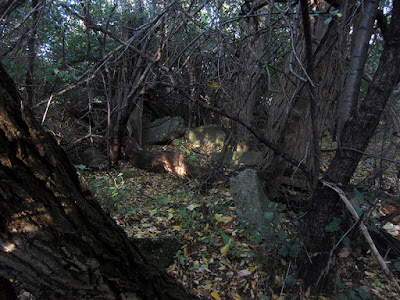 The way the ruins were thoroughly broken up made it seem like whatever was here had definitely been demolished rather than falling down on its own, but it was also hard to tell whether the rubble had merely been dumped here from some other location. 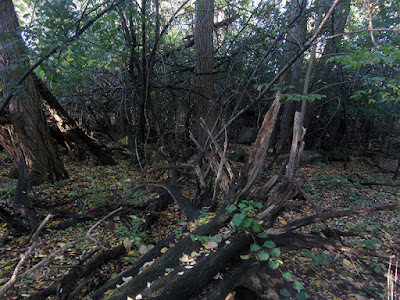 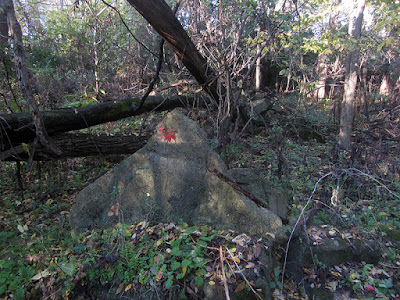 Now here is a definite staircase: 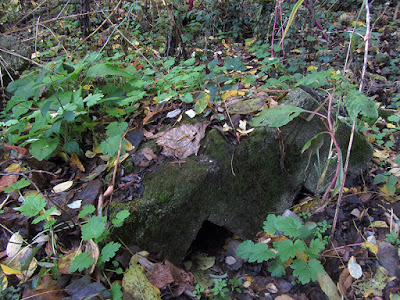 A deep growling sound came from behind the dense underbrush to our left, perhaps a rabid lycanthropic polar bear was planning on turning us into his next meal! Turn to page 18 if you want to investigate the noise. To ignore that sh*t, continue reading. 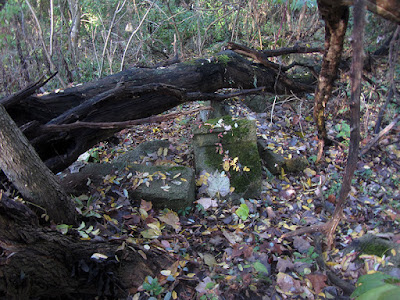 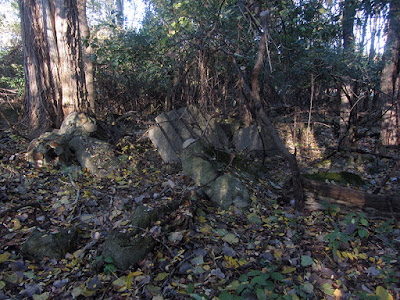 Say, just how tall was this damn building, with all these stairs in it? Seems a little massive for something that was just out in farm country. I mean, they don't make too many barns out of concrete, so...? 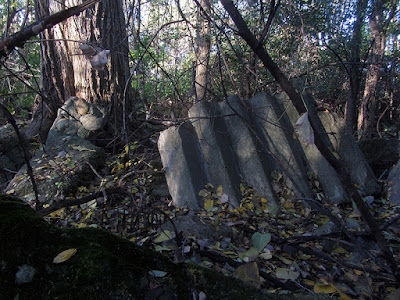 Bricks are pressed into the concrete here (below), so it seems like this is pretty primitive concrete work, perhaps indicating that it is at least 100 years old? 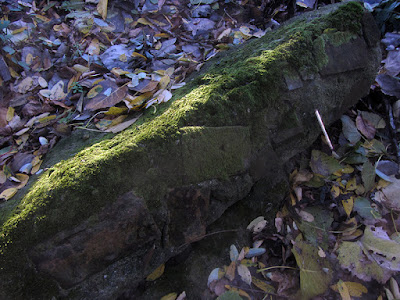 A big footing here; this particular area seemed to be rich with finds: 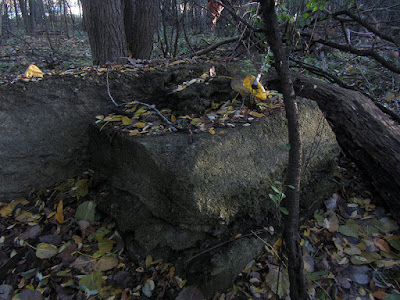 Turn the page to continue investigating this spot. Go back to page 8 if you want to look for more old bottles. 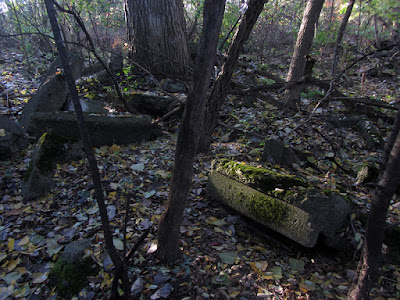 Sure was pretty out here with all the autumn leaves coloring the ground, and the morning rays lighting up the tufts of moss on the ruins. 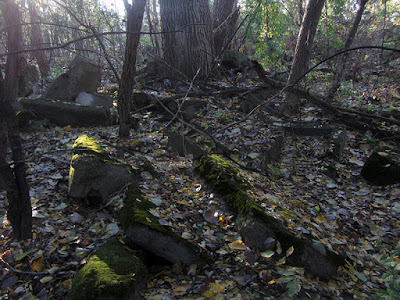 A close-up view of the primitive iron rebar sticking out of the staircase; another clue that the ruins could be up to 100 years old:

Cobblestones (and more bricks) mixed in with the concrete here, possibly footings? 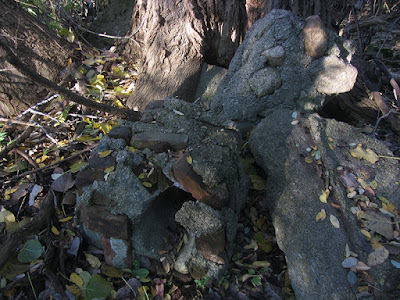 The tree is growing up through the pile, giving us an indication of just how long the rubble has been sitting here: 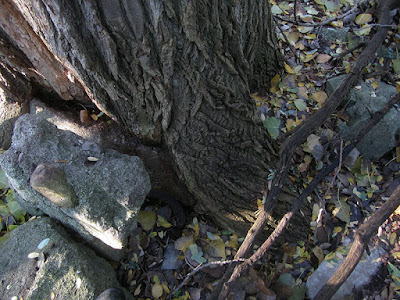 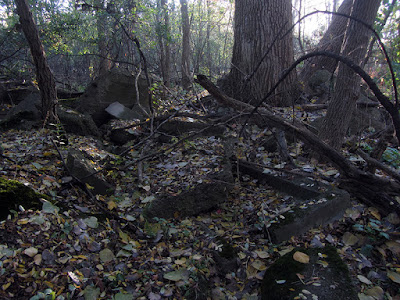 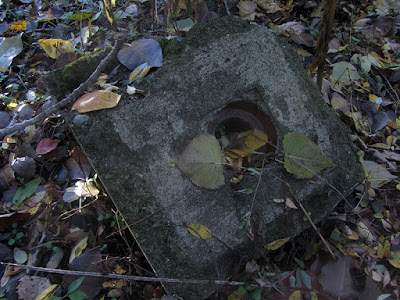 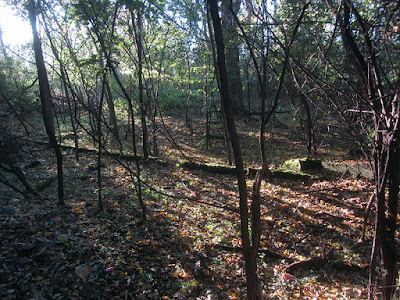 If you want to examine this closer, continue reading on the next page. 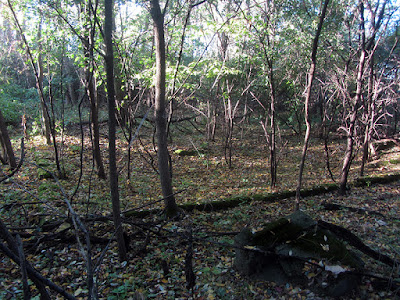 Ah-ha, and now we have found an actual foundation wall of a building, still in place. This is a good, solid clue. 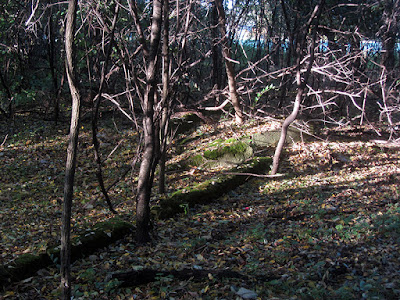 The wall was covered in thick moss, and the average thickness of the trees inside the foundation's perimeter should tell us how long it's been since this structure existed. Most of these are pretty young trees, so this building probably stood for a lot longer than the rest. 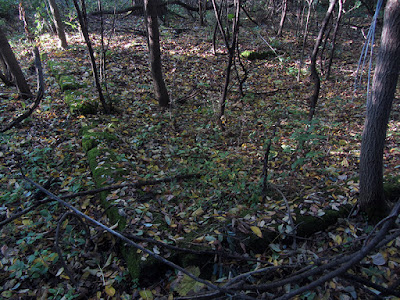 If you want to investigate deeper into the grove of older trees, turn to page 38. 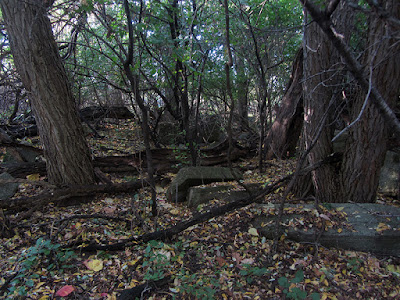 These large slabs tend to look a lot like hewn stone, but they are concrete. 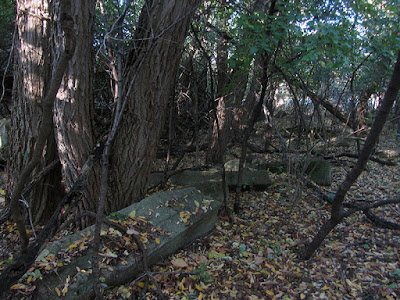 Again, lots of large trees interwoven with the ruins, implying that demolition took place a long time ago. 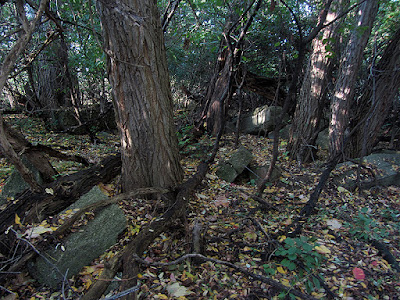 Oh damn, you really should have turned to page 18 earlier, because now that growling noise in the bushes turned out to be a fire-breathing three-headed vampiric Manticore with an AR-15 for a tail! Looks like you got us both killed, thanks a lot. Turn to page 42 to read about your closed-casket funeral.