Proving once again that all I need to make a new post on nailhed.com is 4 photos, 1 teaspoon of history, and a 1/2 cup of sarcasm all baked in a well-oiled deadpan, here is some totally legit peer-reviewed stuff that will make a perfect addition to my vast library of informative, factual posts.

Navi and I visited Detroit's Belle Isle Park recently and we decided to stop and take a look at this old dilapidated Victorian-era shelter that is a prominent sight along Central Avenue. We were both somewhat awed by the appearance of giant spider webs all over the structure... 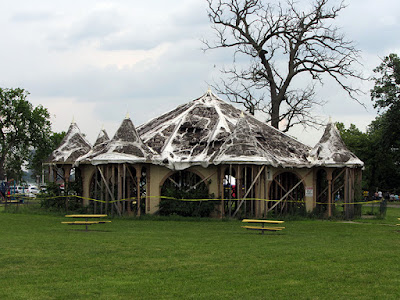 My partner pointed out that this explains where all the Africanized saber-tooth tarantulas ended up that were left behind in the Spider House when the Belle Isle Safari Zoo was abandoned. Since taking over operation of Belle Isle, the State of Michigan has erected some caution tape around it to keep little children from wandering into the structure and becoming ensnared in the giant cobwebs, sort of like the misadventures of little hobbits about to be gobbled up by Tolkien-sized arachnids. 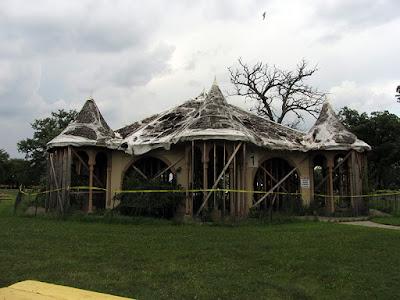 There was a state trooper eyeballing us from across the street as we approached the pavilion, but instead of warning us of the danger he retreated to his cruiser then appeared to make the sign of the cross and lock the doors. I have heard that the Michigan State Police have been involved in a few gun battles with the spiders when they come out at night to hunt, but Governor Snyder was keeping a lid on it to prevent more bad publicity. One more reason for white people to roll up their windows when they come to the D... 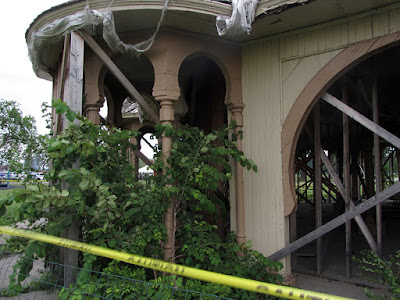 The official name of the structure is Belle Isle Shelter #1, but since 1897 it has been called the "Newsboy Shelter" when the Newsboy Statue was erected next to it, a gift to the City of Detroit from James E. Scripps (founder of the Detroit News, who I talked about in another post) to honor of the street orphans who sold his papers. 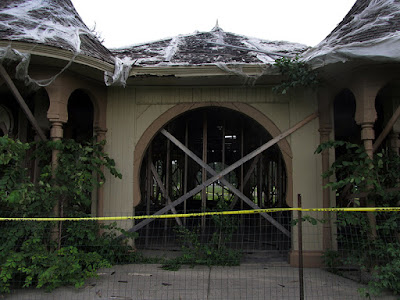 If you've ever watched Detroit's famous Thanksgiving Day Parade, you might remember the old guys marching with newspaper sacks over their shoulder; they are the Old Newsboys' Goodfellow Fund, a century-old charity that was established here to raise money to make sure all those poor kids got a decent Christmas. They've been marching in the parade since it began in 1924, and they are said to be America's most-copied charity—another Detroit invention that spread nationwide. 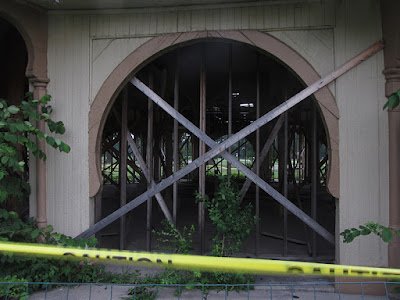 Belleisleconservancy.org claims that "some discrepancy exists" as to when the Newsboy Shelter was built, and that the earliest known reference to it was as a music pavilion in 1891, although some records say it was built in 1911. It apparently used to have a second level according to this somewhat apocryphal-looking image below:

My archivist friend Andrea found the same photo, and according to her it was labelled "band stand."

Personally, from my short dive into the files with her, I surmise that the structure was built in the 1880s or 1890s (based on the architectural style) and classified as a "music pavilion," then the bandstand was removed from the roof for some reason in 1911 and the structure was reclassified as a regular "rain shelter" on the Parks & Rec books, which might explain why it is difficult to research. I suspect the shelter numbering system has also been changed a few times over the decades as well. 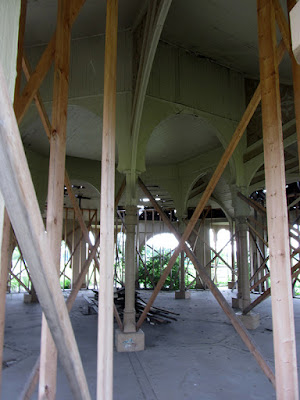 The shelter was renovated in 1992 using revenue from the Belle Isle Grand Prix, but it was a cheap fix at that time, not the full historic restoration that it desperately needed. Since taking over the island, the Michigan Department of Natural Resources had an assessment done, which estimated the cost for a proper historic restoration to be around $650,000...surely a pretty steep price tag for the state bean-counters to justify when a mere picnic shelter can be built new for a fraction of that cost. So the non-profit Belle Isle Conservancy stepped up with a patronicity.com fundraiser campaign to restore the Newsboy, but as of August of 2017 the Conservancy was only able to garner a mere $2,585 of its $50,000 goal. 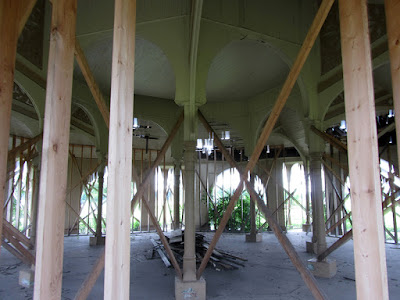 The shelter's future looks to be in doubt, since it is left sitting in such ugly shape in the midst of other park improvements by the state, and I can find no more recent news. 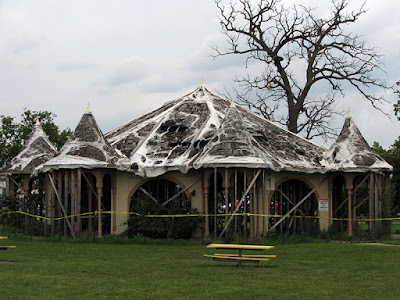 Although I totally could leave you hanging and end this post after just a handful of photos, I think I will toss in a couple more random Belle Isle snaps that I can't figure out what else to do with. 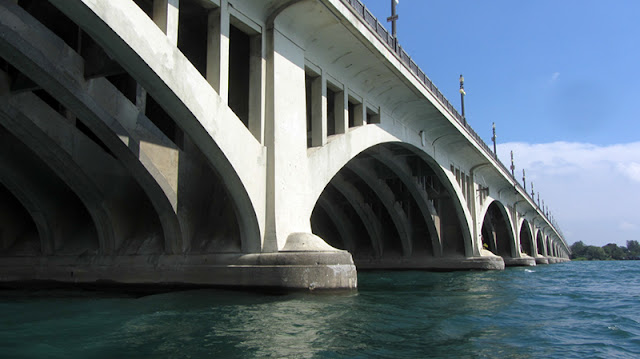 These were taken from my little boat during a random excursion around Belle Isle in 2015 or so. Here is the old water intake crib of the Detroit Waterworks on the opposite shore, along East Jefferson Avenue: 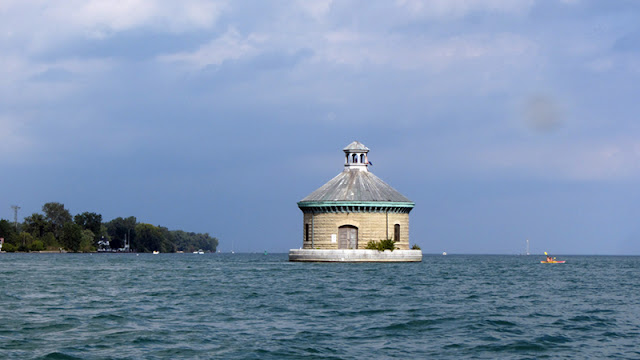 It was built in 1905 and no longer functions as an intake, but is used as an access point for the tunnels for the water system. The current water intake is on Belle Isle itself. 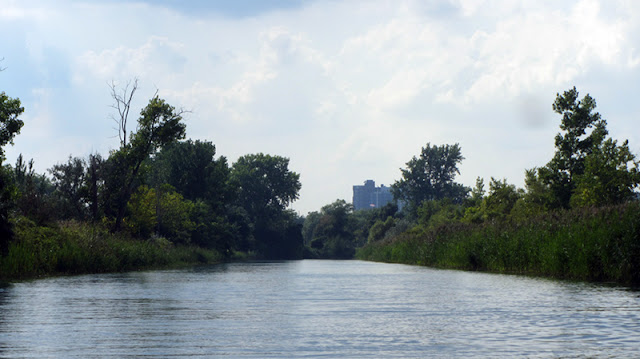 Since my boat is so small and drafts so shallow, we decided to sneak up through a couple canals to some rarely seen areas since we could fit it underneath the low bridges... 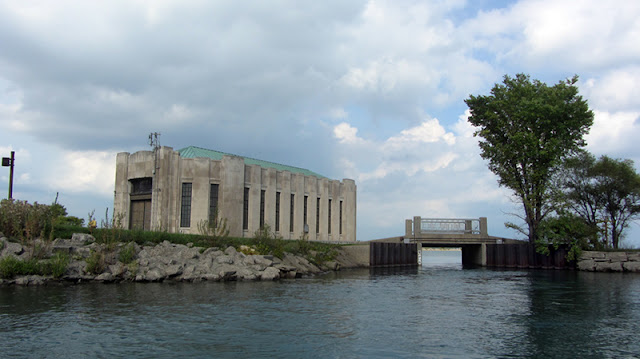 This building is the Belle Isle Water Supply Intake, at the very northeast end of the isle. It represents the source of drinking water for basically all of Southeastern Michigan (approximately 5 million people) before it enters the Detroit Water & Sewerage Department's purification systems and distribution grid to reach your tap. Had I known this at the time I might not have just sailed right in here, but what's done is done I suppose, and luckily I wasn't shot by Homeland Security for suspected terrorism.

According to a book about the Detroit Waterworks by Michael Daisy, this intake house was designed and built in 1932 by Clarence W. Hubbell, the chief engineer of the Detroit Board of Water Commissioners. It replaced the c.1905 one I showed three pictures ago. The building is also listed however in the HAER's Lower Peninsula of Michigan Inventory of Historic Engineering and Industrial Sites, which disagrees, saying it was built in 1929 and designed by George Fenkell, chief engineer. Local architectural guru Benjamin Gravel suggested that the Art-Deco exterior façade of the plant may have been designed by local architects Smith, Hinchman & Grylls. In any case, you may recognize it as the hideout in the blaxploitation movie Detroit 9000. 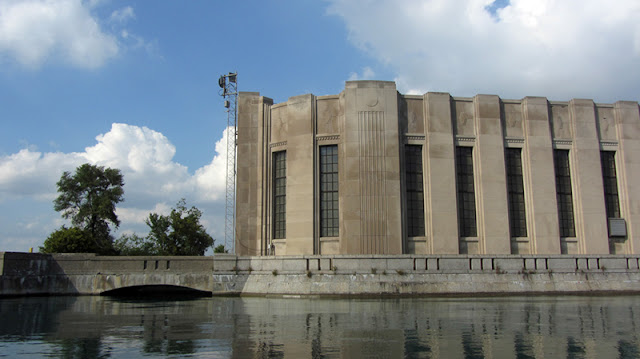 The Southeastern Oakland County Water Authority website has a lot of informative detail about the grandiose physical infrastructure of the Detroit Water and Sewerage Department System (DWSD) on their website. According to them our drinking water comes mainly from Lake Huron and the Detroit River, but obviously since all of the Great Lakes are connected, we drink a little from all of them (except Lakes Erie and Ontario).

So in other words if, say, the DeVos family's super-yacht is dragging its anchor while they're flitting around Mackinac Island, and it hits the much-scrutinized Enbridge Line 5 causing an oil spill, I imagine engineers at this plant would probably respond by shutting the intake gates to prevent equipment damage. I'm no engineer but we might be without water for awhile, and Mayor Duggan's lawn will die—do we really want to risk these grisly consequences, Michigan?! 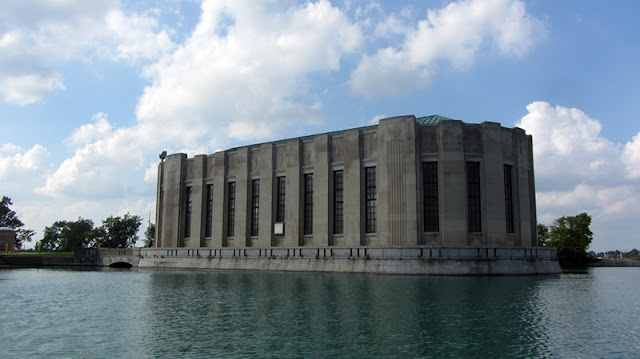 Raw water enters the system through this intake building and is pumped to the city's west side and east side treatment plants. The big old High Lift Building on E. Jefferson at Water Works Park is the first stop along the route, which is connected to the Belle Isle Intake by a 15.5-foot-diameter brick and concrete tunnel lying under the Detroit River. From Water Works Park the raw water flows through a 14-foot tunnel for 10,000 feet, then forks to the Northeast Water Treatment Plant at 8 Mile Road & Conner, and to the Springwells Water Treatment Plant at Warren Road & Lonyo.

The Springwells plant was the largest waterworks in the world when it was built in 1924, and still ranks as the world's 10th largest today. The miles of tunnels are routinely inspected by DWSD for structural integrity and zebra mussel infestation, using remote cameras or actual divers. Detroit's water system was one of the greatest ever assembled by the human race, a true testament to civic achievement, and a model for the world. You may recall I also explored the abandoned Highland Park Water Works in an older post, which was a notable historic exception to the DWSD system. 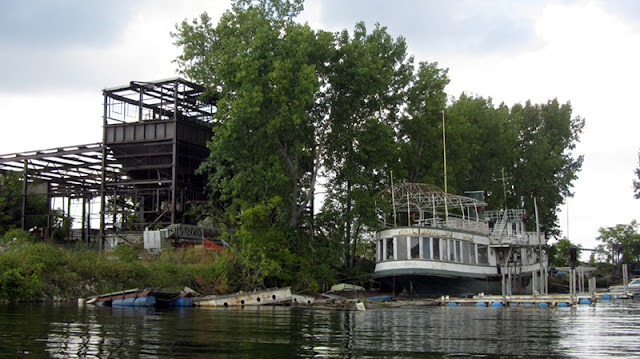 Anyway, one more point of interest from my boat ride was the infamous "Goat Yard," where you can see this old ferry boat, and I believe there is a much older shipwreck lying underwater next to it, visible from aerial images. All this was recently cleared out however, since Detroit Edison sold the land to Chrysler. The 105-year-old Edison Boat Club next-door will be coming to an end as well; their final regatta was August 16th, 2019, just a few days ago.

Here is a different wreck, the Boblo Boat Ste. Claire, which burned at its dock recently and was moved to the east riverfront for storage, while its sister ship Columbia (which I explored in an older post) is being restored in New York: 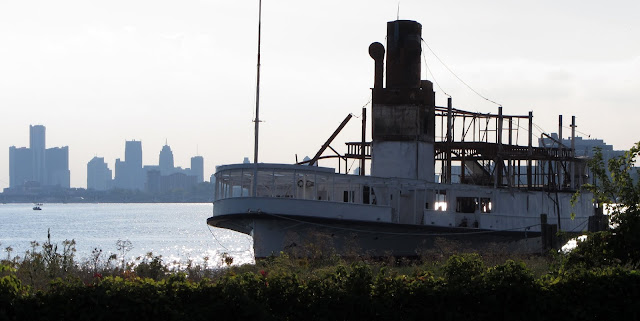 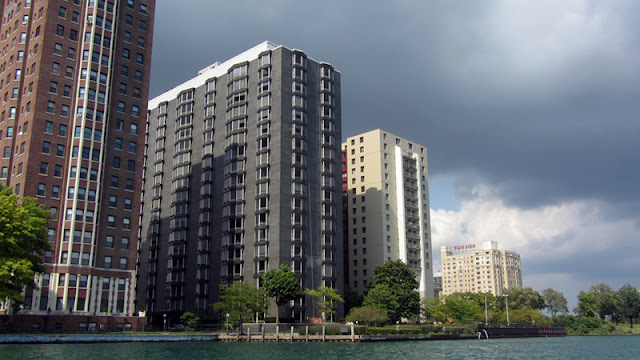 Speaking of the Edison Boat Club here is a photo I snapped of their marina after the final regatta, with the "Two Brothers" powerplant lit up in the background. All of that is going to be demolished, allegedly for a parking lot for the new Chrysler factory. At least I can lay claim to the dubious distinction of having crewed aboard the last boat to cross the finish line in the Edison Regatta, ever. LOL. 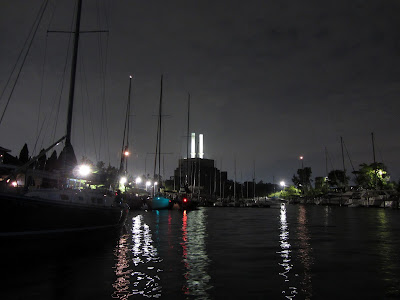 Anyway, if you go to Belle Isle, watch out for those spiders.