Boblo Island is one of those hazy, collective childhood memories that every Detroiter has, at least if you were born in my generation or prior. Chisel and I both recalled the nostalgia of the legendary Boblo Boats with a certain fondness. It's almost like you just aren't a real Detroiter unless you have memories of riding on the big "Boblo Boat" down the Detroit River to the Boblo Island Amusement Park in the summer. But the old park eventually closed down, and that 100-year old tradition was severed.

Granted, both the amusement park itself and its two ferry boats were getting old and worn out, and Boblo went out of business in 1993, but it was still a magical memory for most families, because not only the children but the parents, grandparents, and even great-grandparents all had the same shared memories of riding on the same ferry boat to the island when they were young.

It was almost spectral to try and envision the old park being abandoned, but once the ferries stopped running there was basically no way to get to the island unless you had your own boat and a passport, so the memory essentially existed in a vacuum, like a ship in a bottle for many, many years. In the early 2000s, a developer bought the island to build expensive housing there, at which time there were news stories about it and people started to think about the island again, but the rides and roller-coasters had mostly been removed. The redevelopment basically failed and sat idle for many years after the first few houses were built, however.

So when Chisel and I learned that one of the boats was still around, hiding somewhere in Metro-Detroit in mothballs, we were both immediately galvanized into figuring out just where it was, and whether we could get to it. Sure enough after a short search, in a tucked-away industrial nook of the riverfront, we found it: 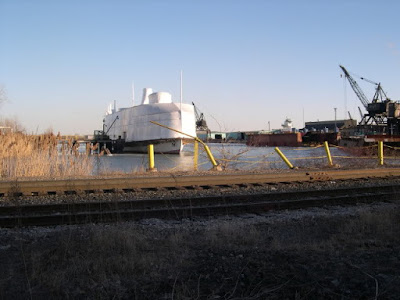 According to the nonprofit volunteer group that has been working to restore the boat for the past several years, the S.S. Columbia Project, the boat is a registered National Historic Landmark. It is the oldest surviving passenger steam vessel in the United States.


Built in 1902, the Columbia combines a spectacular array of design, engineering, and aesthetic innovations. At 207’ in length and 60’ in breadth, the ship was designed to carry 3,200 passengers comfortably on her five decks. Her beautiful interiors were created in collaboration with the painter and designer Louis O. Keil. The ship is adorned with mahogany paneling, etched and leaded glass, gilded moldings, a grand staircase, and an innovative open-air ballroom. The Columbia’s massive 1,200-horsepower triple-expansion reciprocating steam engine, surrounded by viewing galleries, will become an unforgettable demonstration of early steam technologies for visitors. Laid up and minimally maintained for the past 15 years, the ship has suffered an accelerating decline in her condition.

As far as I know the plan is to get the boat in seaworthy condition and sail it to New York where it will become a passenger ferry again, serving the Hudson River. (For what it's worth, I didn't know there was any preservation group working on the boat until well after I had explored it).

Unfortunately when we arrived, we found that it was encased in protective boat wrap, preventing our getting aboard. The gangplank was also missing. 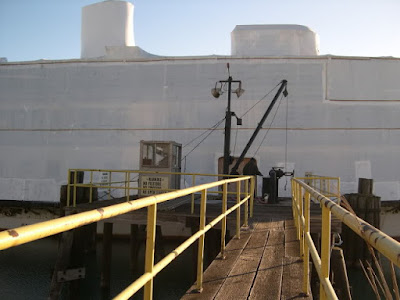 Another webpage, BobloSteamers.com, notes that the Columbia and Ste. Claire are the last two remaining classic excursion steamers in the country, they are the last existing ships designed by the great naval architect Frank E. Kirby (whose name you may recognize from the Detroit street that was named after him). Not only that but these boats represent two of the few surviving vessels built by the Detroit Dry Dock Co. The BobloSteamers.com website further states that the Columbia's almost 90-year record of continuous service on the same single run stands unequalled in U.S. maritime history.

What is incredible is that those of us who remembered riding these ferries never realized just how special and historic they were; to us they are just the "Boblo Boats." 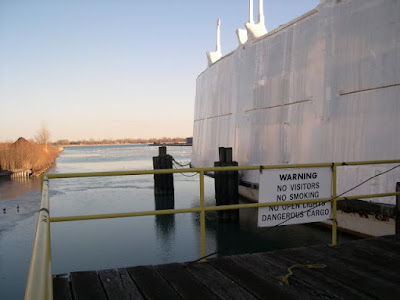 Boblo Island was always fairly racially segregated, and only really allowed blacks on certain days of the month, called "colored" days. In June of 1945, a lighter-skinned black girl was shoved off of the Boblo Island ferry Columbia just prior to departure, because of her skin color. The girl, Sarah Elizabeth Ray, was a "Rosie the Riveter" during the war, but she was excluded from the ferry because Bob-Lo Excursion Co. had a policy against "Zoot-suiters" and "coloreds." The ferry company claimed in the ensuing court case that it could exclude blacks because it was a private company operating in another country (Boblo Island is a Canadian island).

Leading business owners from Detroit's African-American enclave, Paradise Valley, got together to open a “colored” amusement park on nearby Sugar Island soon after the pushing incident on the Columbia. 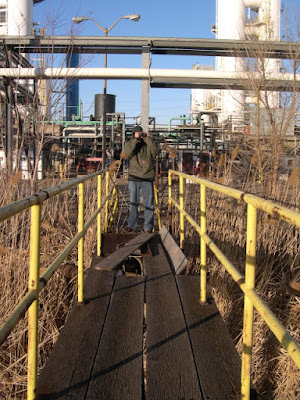 Surprisingly, both the Detroit recorder's court and Michigan State Supreme Court ruled against Bob-Lo's appeal to the civil suit, and it went up to the US Supreme Court. This is impressive, considering that the smoke from the catastrophic Detroit race riot in 1943 could still be smelled in the air. In 1948 the US Supreme Court also upheld the ruling of the lower courts in Bob-Lo Excursion Co. v. Michigan, and Bob-Lo was forced to integrate. Once Boblo Island's park was open to African-Americans, the need for a “colored” park diminished, and I presume that also helped seal the fate of Sugar Island. 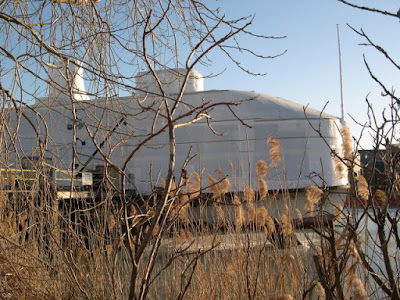 In May of 2010, I revisited the old Boblo Boat, to find that the protective shrink-wrap had been reduced to tatters in the past five years making her look like a banshee, but more importantly that it was now possible to get aboard! 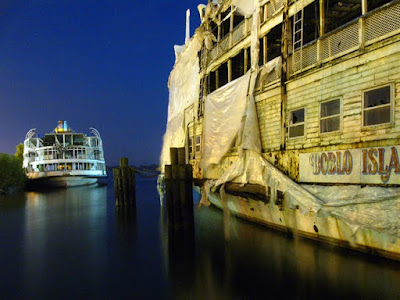 You can also see that the Columbia had now also been joined by its sister, the Ste. Claire, visible a short distance away. 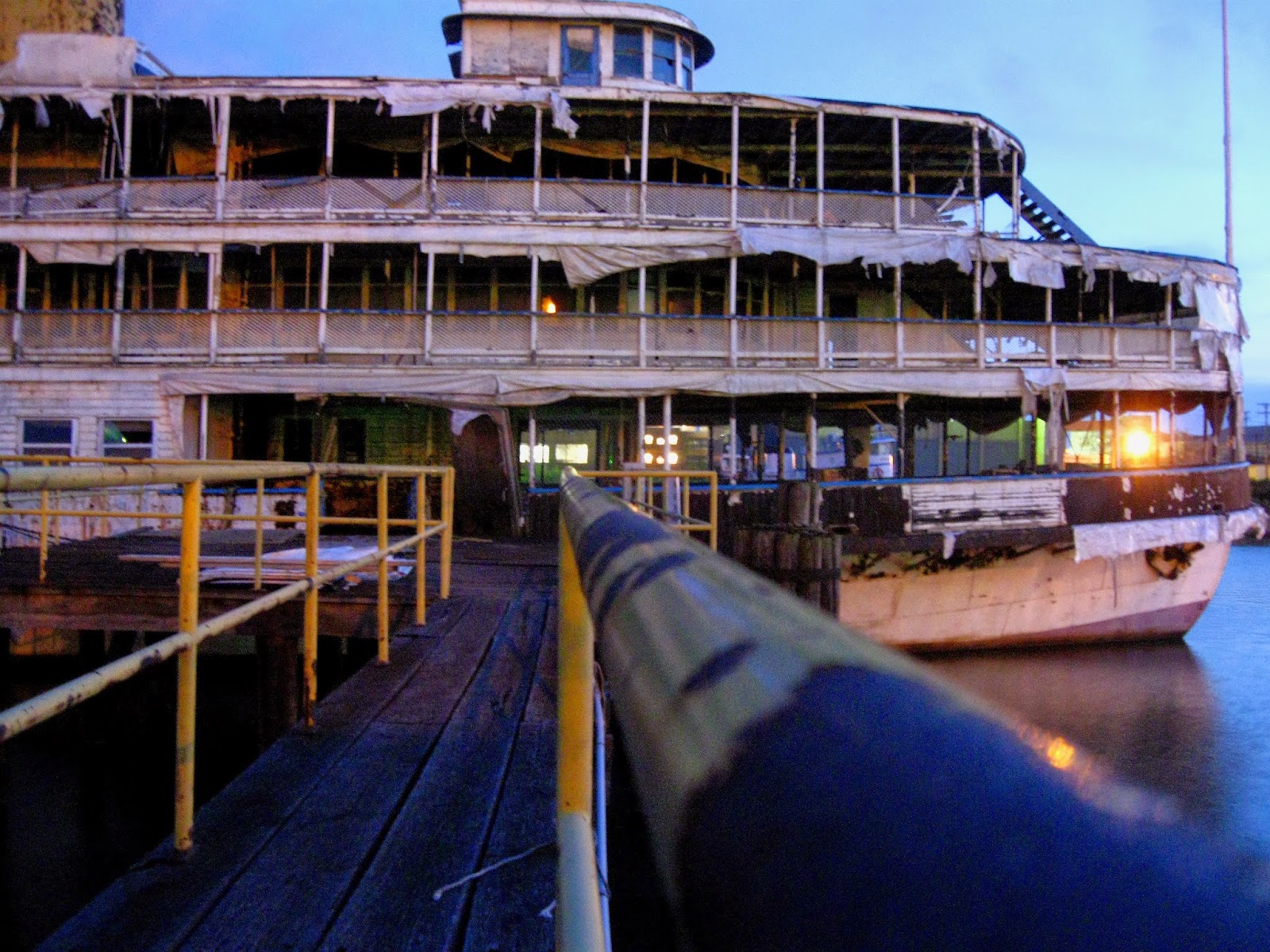 Hank and I slinked aboard in the cover of darkness on a warm summer's eve. 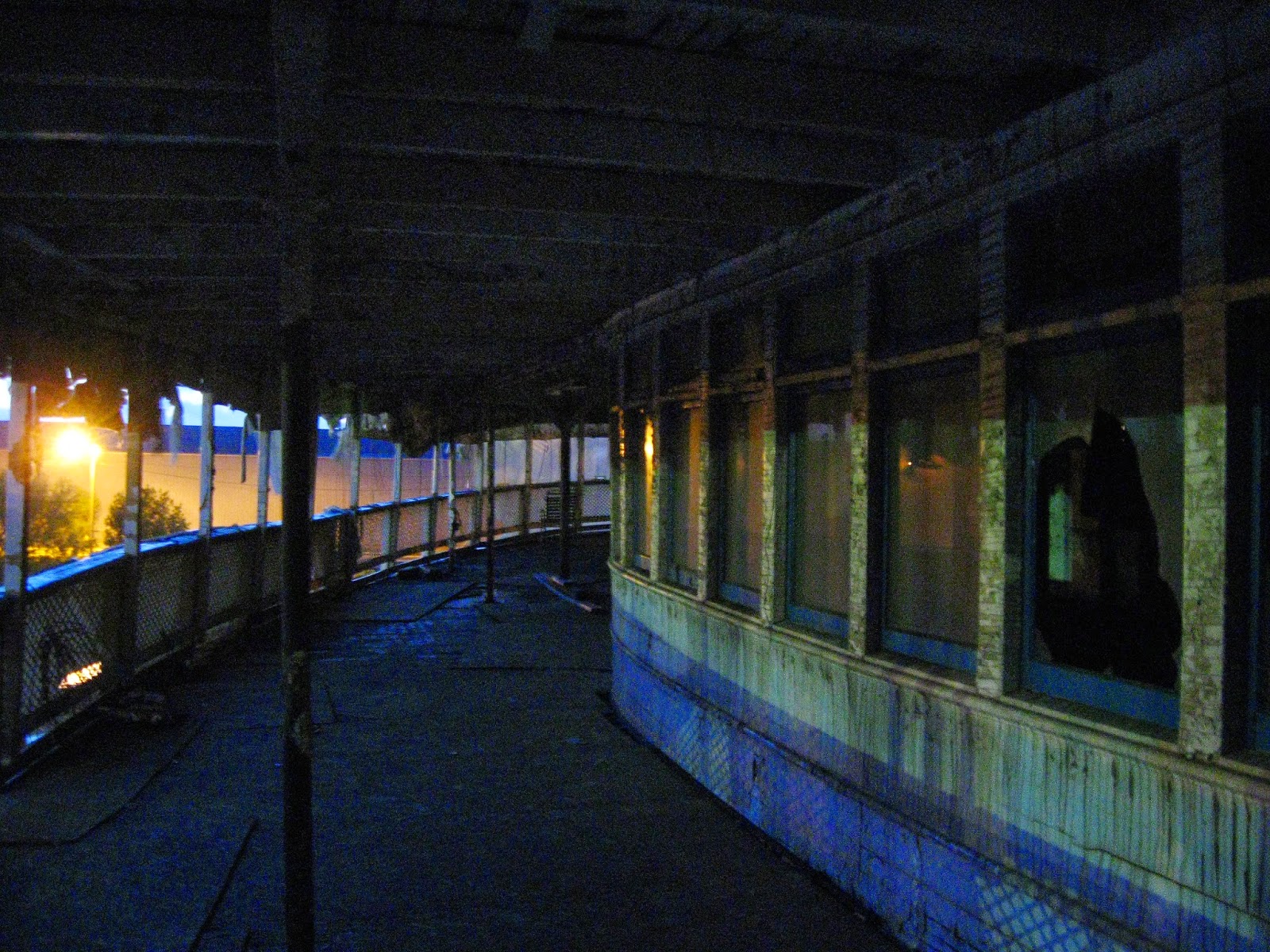 I was unprepared for taking decent low-light photos, as you can see...hand-holding exposures over 1/8 second is rough. I had her hold the flashlight on the grand staircase: 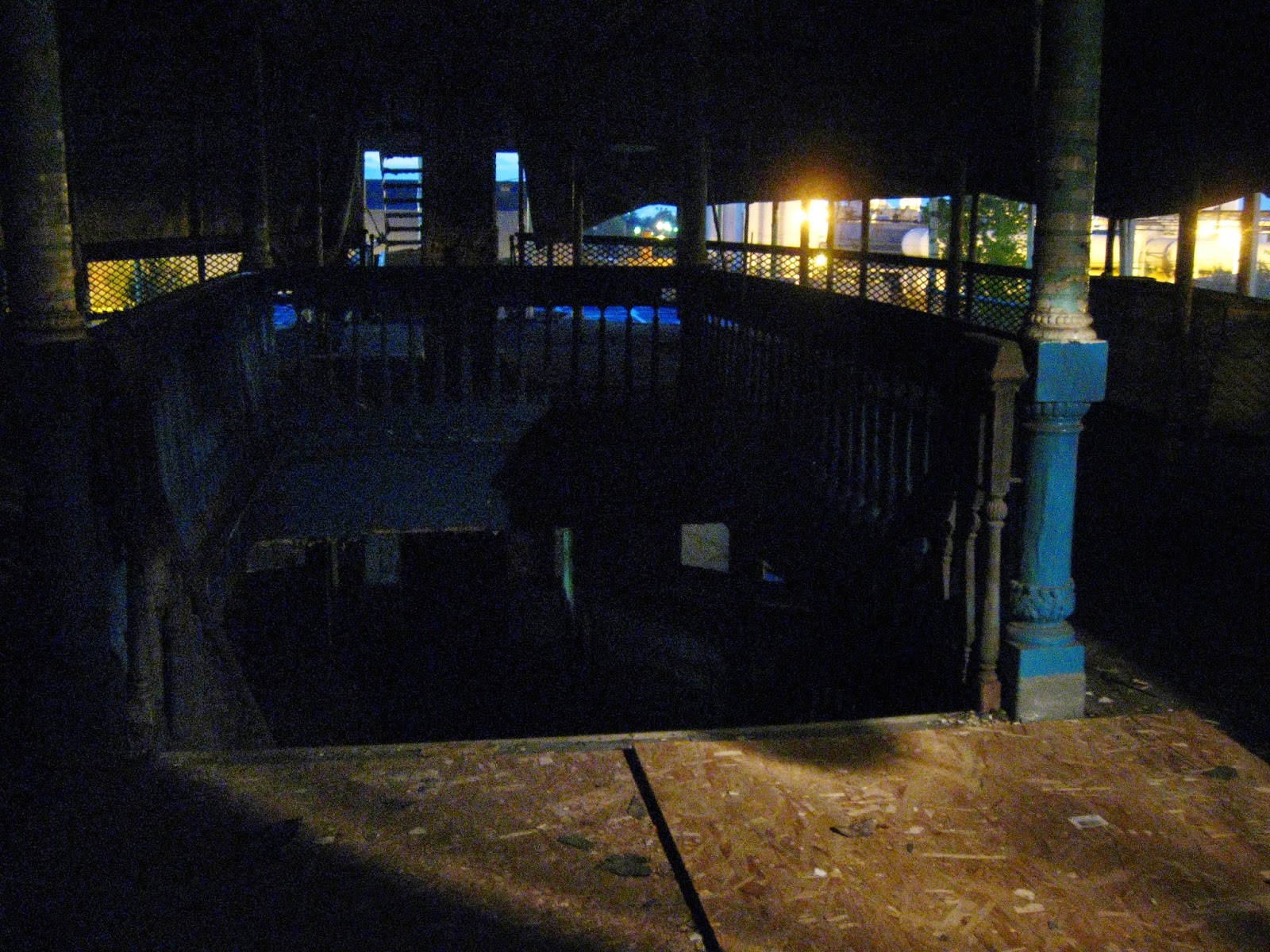 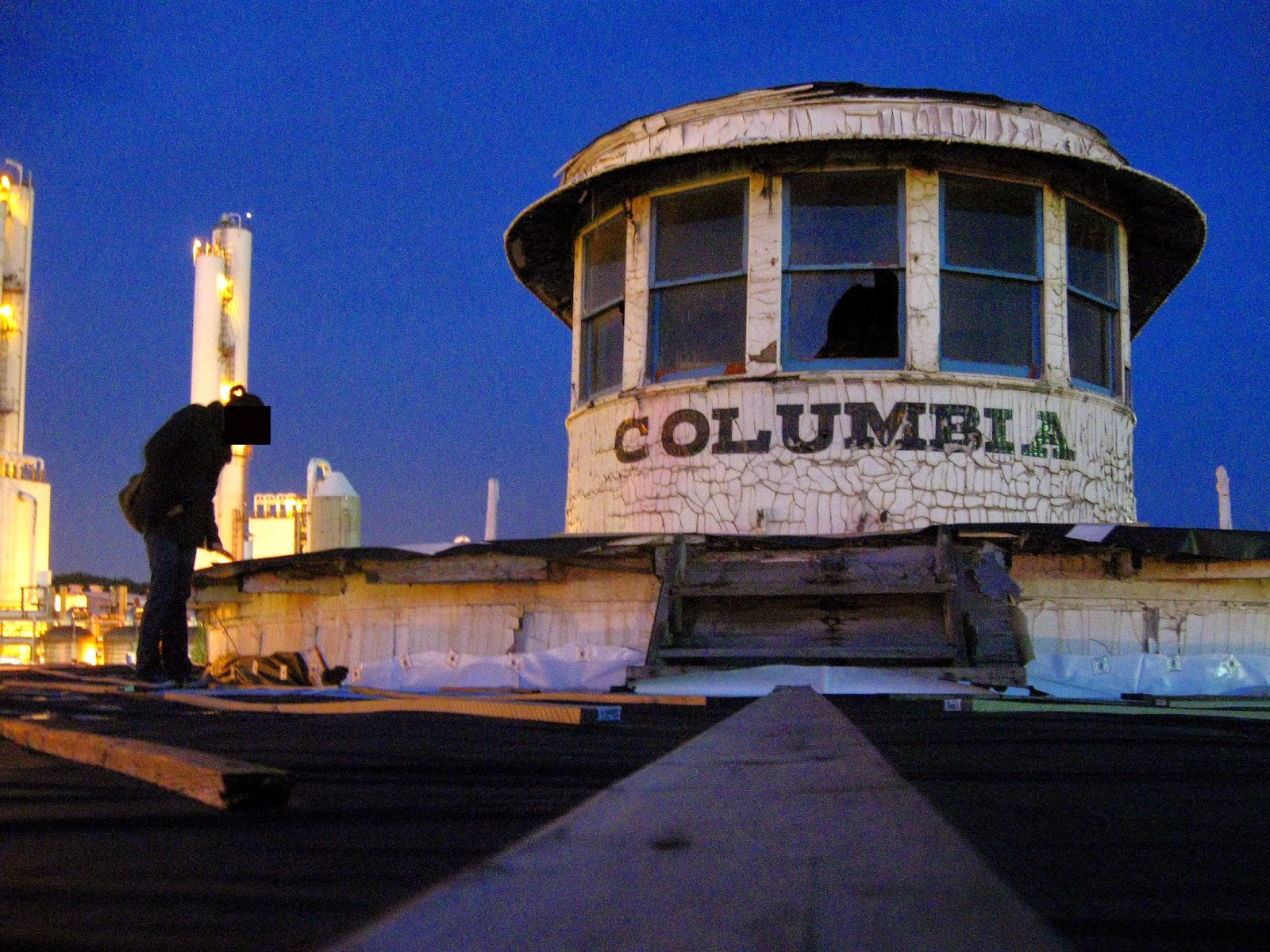 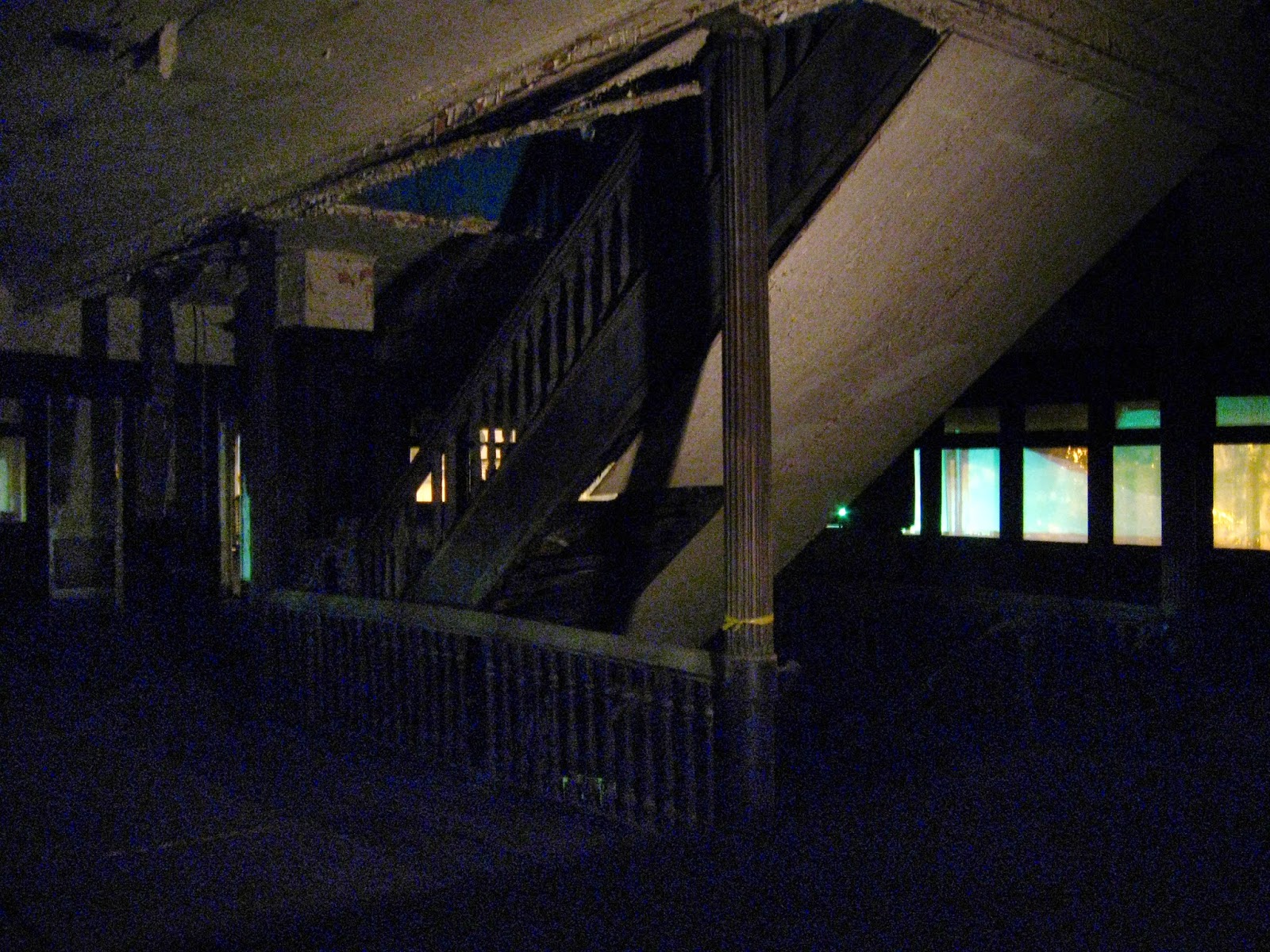 Being in the midst of a fully operational industrial complex, we had to keep an extra low profile because security was indeed on the prowl: 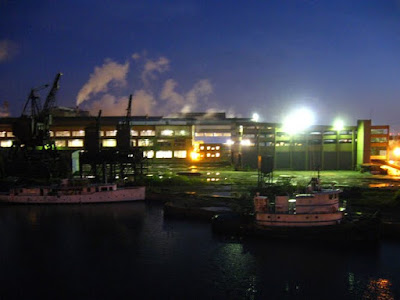 Here is a view from the fantail of the Columbia, overlooking the Ste. Claire: 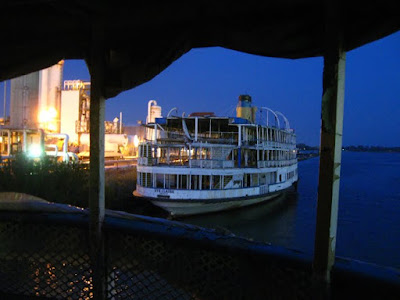 On a return trip a few days later with Sloop, we visited the engine room and lit it up with the construction lighting that was strung in there, but I was dumb enough to have left my camera at home. So here are a few of his photos: 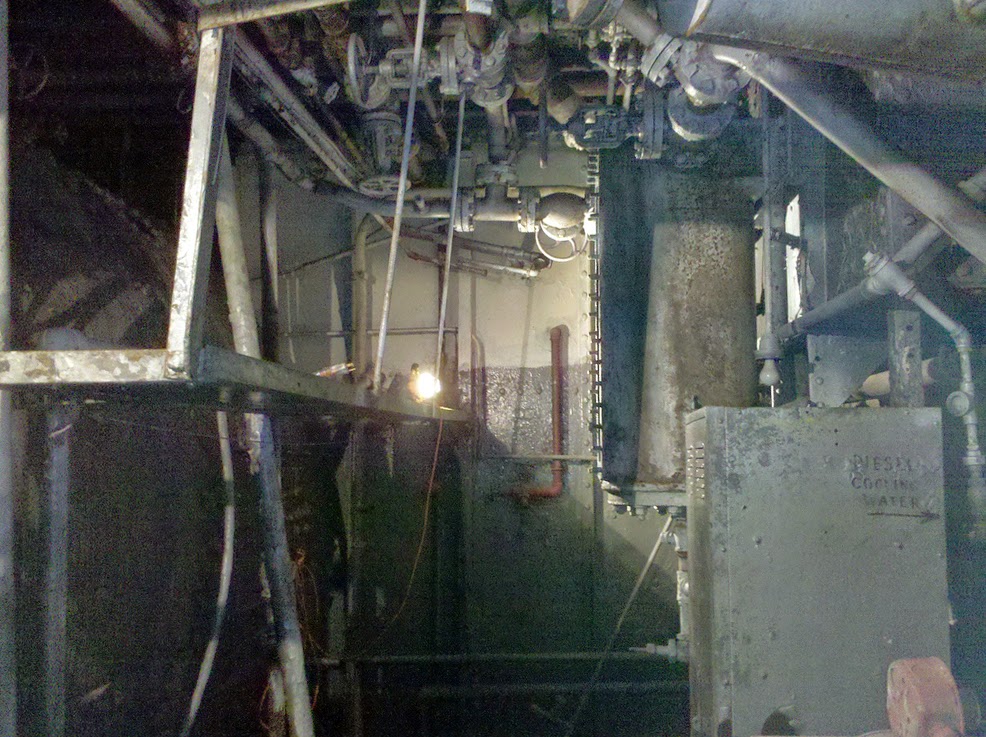 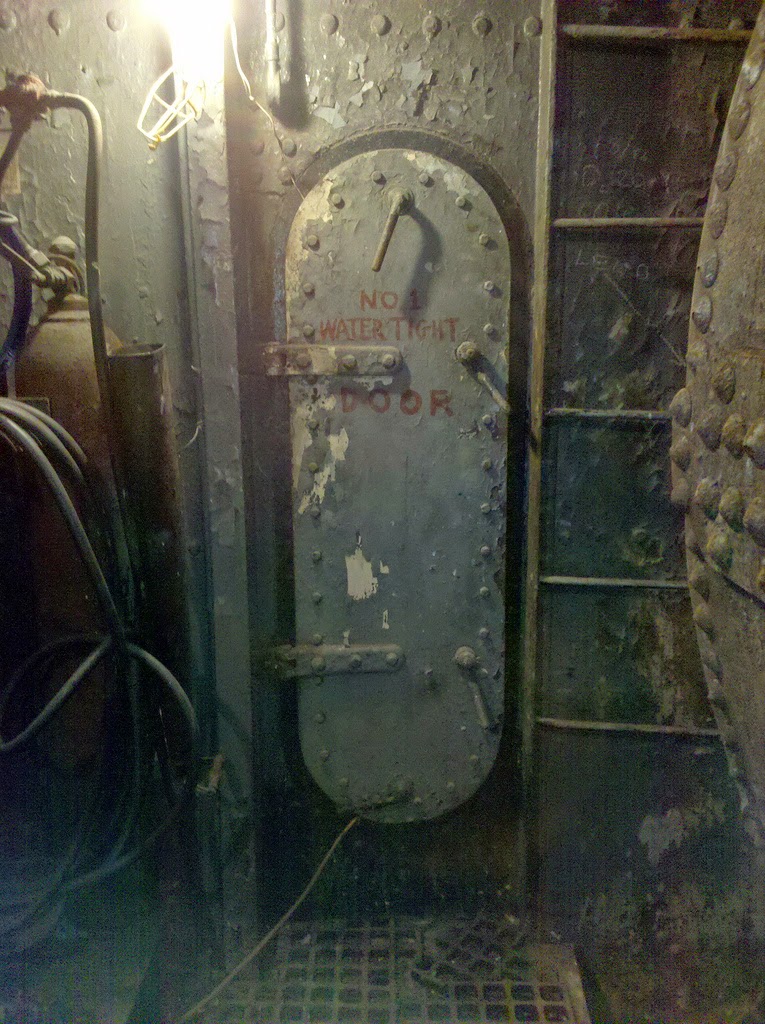 This shot is actually looking at the mammoth steam engine's flywheels and piston rods: 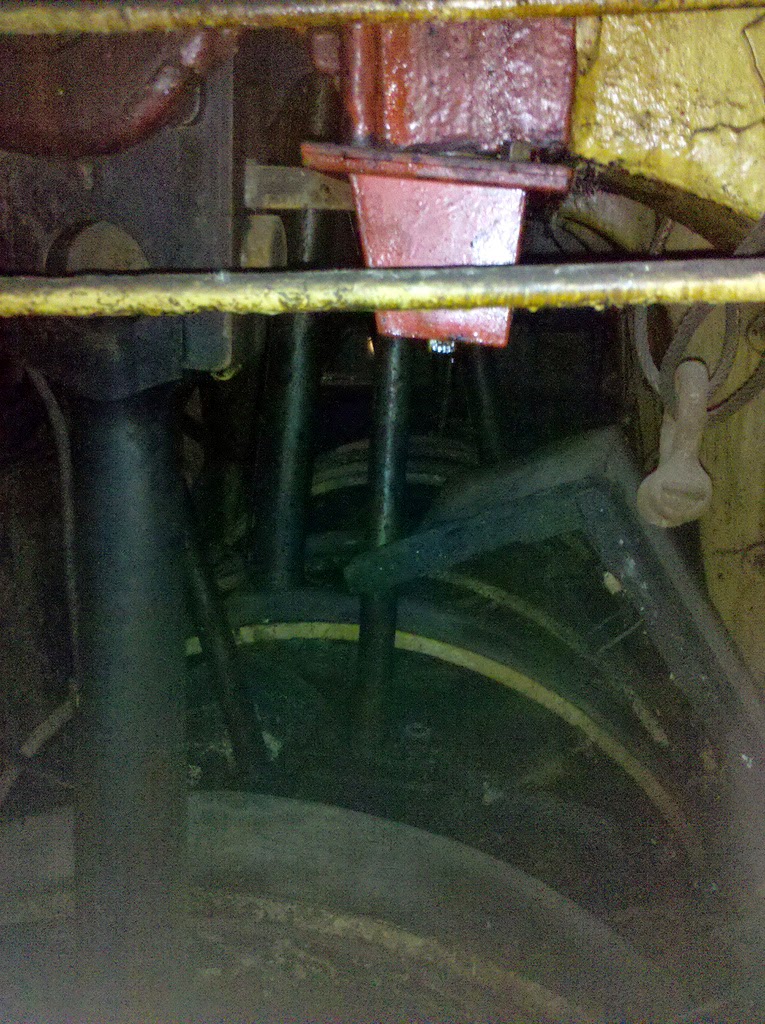 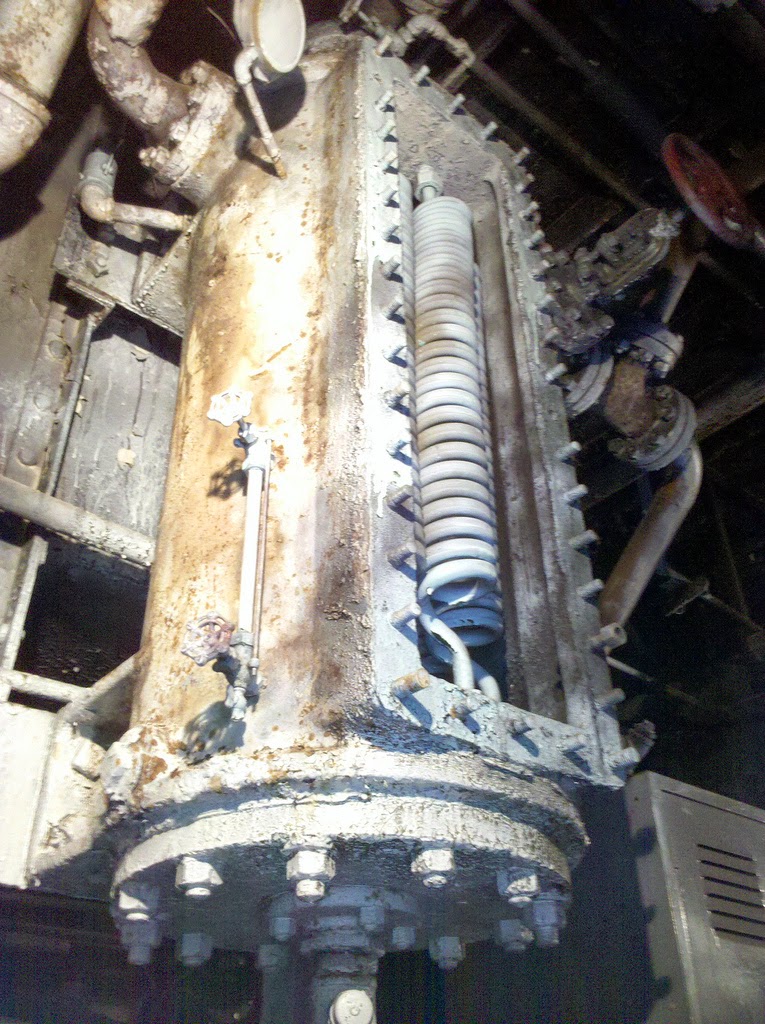 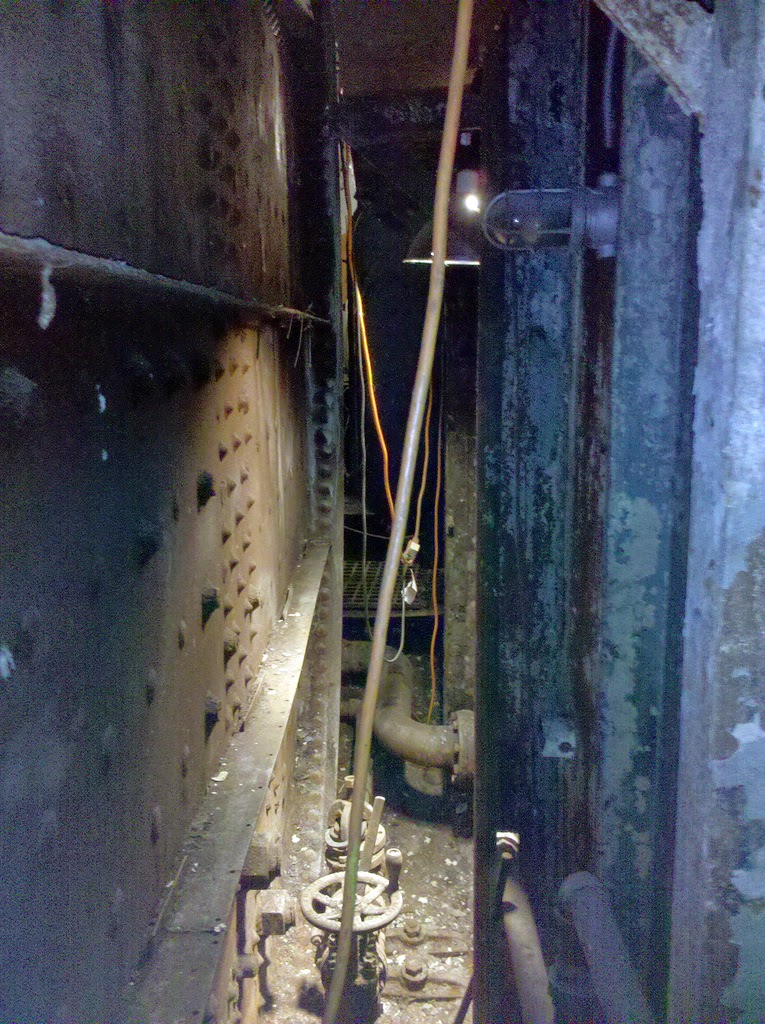 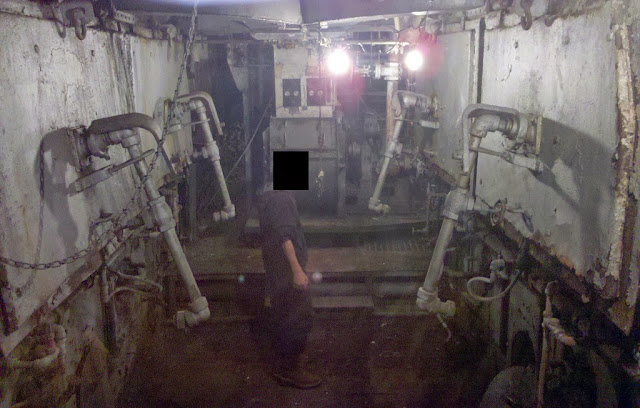 Unfortunately Sloop has an even crappier camera than I do... 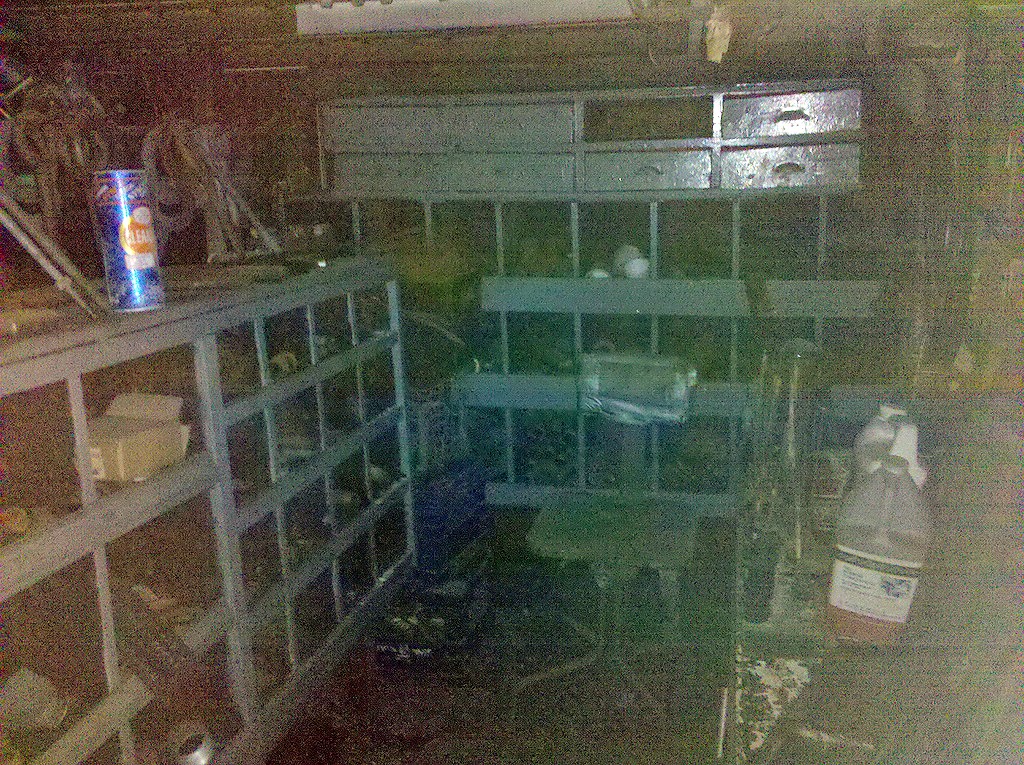 More photos that are much better than mine: http://sscolumbia.org/the-architects-newspaper-step-inside-detroits-ghost-steamship/

Though the Columbia is headed to New York, plans are allegedly afloat to restore the more heavily-damaged Ste. Claire and return it to service on the Detroit River. I have also heard that the Boblo Boats will (or have?) played a role in the movie Transformers 4.

Update:
While I was cleaning the attic of my Victorian-era house, I found this gem under the floorboards. It suggests that an occupant of this house once was a parishioner of Ste. Anne's church: 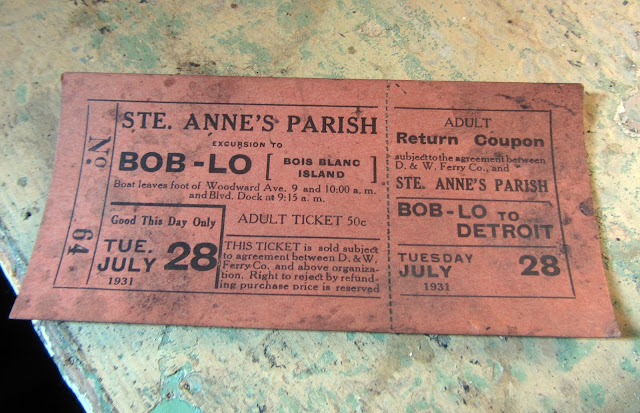 It's uncanny to imagine that I have rode on the very same ferry that the former occupants of my house did. There is one thing that every Detroiter who lived from 1902 to the 1990s has in common...we all rode on the Boblo Boat.

Well...all except for those of us that were excluded because of skin color.