You probably would not have guessed there is a such thing as East Grand River. Well, there is; the Harmonie Club stands at 267 E. Grand River, a tiny little stub of a street in Bricktown, the old German part of town (at right): 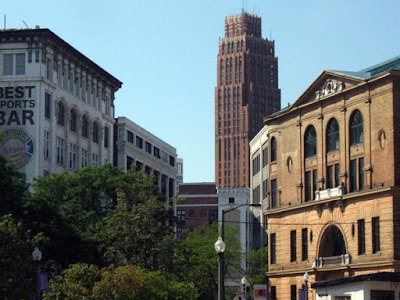 It sits across from Harmonie Park, which according to the “Woodward Plan” is an odd triangular-shaped plot of land resulting from Judge Woodward’s re-planning of the city after the Great Fire of 1805. F#$%ing urban planners…

Anyway, Harmonie Park is the mirror twin of Capitol Park on the west side of downtown. As you can see it abuts the Hotel Milner and is very much still a "work in progress":

The Detroit ‘krauts formed Die Gesang-Verein Harmonie, or “Harmonie Society,” in 1849 (making it older than the one in New York City), a social club to meet and sing Lieder, which is “a German art song for solo voice and piano.” 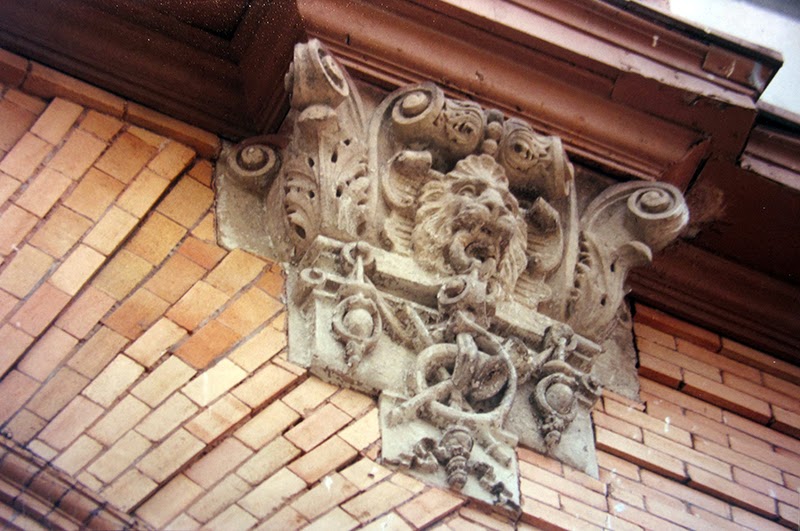 Their building at Lafayette and Beaubien burned down in 1893, and they held a competition (open only to German architects, not surprisingly), to design a new place for them. Herr Richard Raseman’s Beaux-Arts design was chosen, construction beginning in 1894. 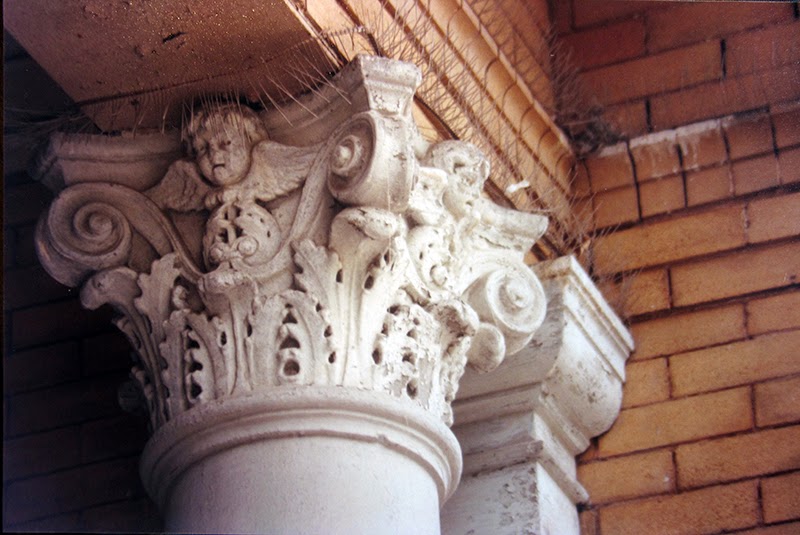 It contained dining rooms, lounges, card rooms, meeting rooms, and two large auditoriums. It also included a rathskeller, which is a German beer hall traditionally located in the basement of a city hall, or nearby to one.

One would do well to note that Herr Raseman also oversaw the construction of another triangular building, the G.A.R. Building, after his partner Julius Hess died during its construction. 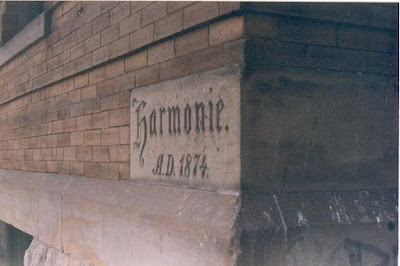 Above is an old shot I scanned from film in 2004. The cornerstone says 1874 because it is the transplanted cornerstone from the first building, which burned.

Thanks to the dwindling membership that affected all such clubs as the population of the city changed from white to black, this building sat vacant from 1974 until the year 2000, despite being listed on the National Register of Historic Places in 1980.

It is now the Virgil H. Carr Cultural Arts Center, run by the Arts League of Michigan, which according to their website "develops, promotes, presents and preserves the African and African American cultural arts traditions within the multicultural community"...offering a wide array of programs, services and activities for both artists and audiences. According to the the American Institute of Architects Guide to Detroit Architecture, the renovation was conducted by architect Schervish Vogel Merz (apparently another German), who also renovated the nearby Breitmeyer-Tobin Building around the same time, as well as Harmonie Park itself.

The building was rescued by the reopening of the rathskeller in its basement as the Centre Street Pub, a first step to reuse. There is also supposedly a bowling alley in the lower level as well, but I didn't make it down there.

Can you imagine how many frothy tankards of Stroh’s Bohemian Style were consumed here in the good ole days? In fact, it is probably a sure bet that Detroit’s own beer baron, Bernhard Stroh himself probably knocked back a few here back in the day.

You may notice a couple tiny buttons on the pillar in the center of that last shot; it is rumored that when this place served as a speakeasy in the ‘20s, the buttons were pushed in order to warn of police approaching. More likely, they were call buttons for the waiter. You might also be able to tell that this room has nice dark wood, and if you were standing in it, you’d notice it is shaped like a piano. This is not on accident.

View across Madison Avenue, to the Detroit Athletic Club:

This view did not exist until 2005 when the old Hotel Madison-Lenox was demolished for a parking lot. I must say, I love the hell out of this lunette window:

On the second floor is this small performing space, where youth jazz musicians can play...it looks to have been the victim of a 1950s remodeling:

The nature of this center is such that even poor kids can come here if they show enough skill and determination, and learn alongside the great jazz musicians of the city. Normally such an opportunity would cost a fortune, or just simply be an impossible pie-in-the-sky dream for most kids.

On the third floor was the big auditorium:

It was still in "unrestored" condition.

What an amazing, hidden little gem. I bet they used to have all kinds of Kompressor concerts here back in the day.

I am told that the junk under all the tarps is leftover stuff from the construction of Ford Field. Why they have it, I don't know.

As you can tell, there was quite a bit of water damage before they fixed the roof.

According to the book Detroit Perspectives: Crossroads and Turning Points, edited by Wilma Wood Henrickson, the Harmonie Society held a very popular masquerade in February of each year, which featured splendid costumes, a series of historically informed tableaux, and of course, singing and orchestras.

"Drop into the building in any evening in the winter season and you will see knots of men gathered here and there, usually around a table, discussing news and current topics and playing dominos, whist, skat and kindred games or telling yarns and singing fatherland songs. They have their beer too; one must admit there would be something lacking without it...."

Wassail indeed. In fact I think I need a Stroh's right now.

There was also eine phone booth sitting in here for some reason.

There were also a bunch of artists’ studios and stuff in the building, but I liked the hell out of this staircase even more.

It is amazing how much of this building is actually made of wood. But then, I guess it is of 1890s vintage after all.

View out the window: 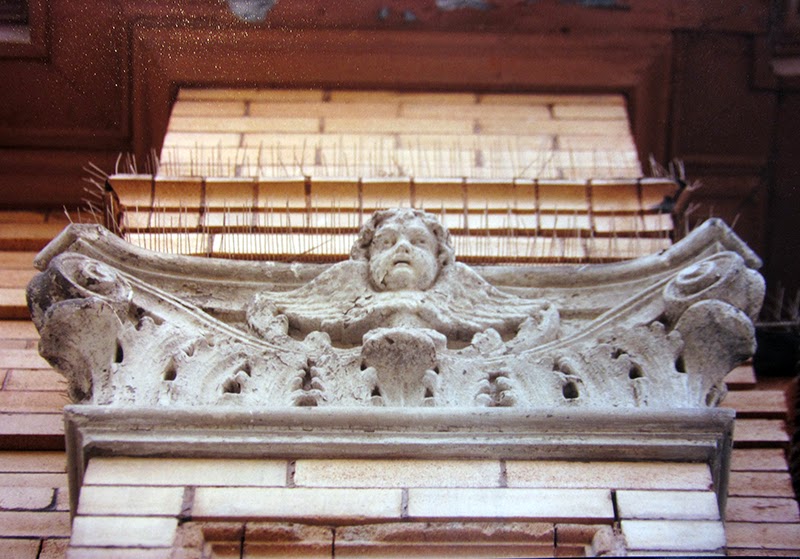