Sybill Oil Corporation was a used oil recycling facility built next to what remained of the old Ternstedt Plant on Fort Street at Livernois, which was explained in the previous post.

My Windsorian buddy Navi actually wrote up a post about it in 2006. His photos show just how much has been demolished from this site. Fast forward to 2013...

This post will mostly concentrate on the modern steel watertower that Sybill Oil left behind on their property--essentially the only remnant of the plant that has not been scrapped or scraped away by torch or bulldozer blade. I have climbed many antique watertowers in my day, but never a modern one before. So this was a special treat for me. Mainly because of the fact that it stood in one of my favorite parts of town, and gave me a great surrounding view of my favorite corner of the city--Southwest.

For a long time I kept expecting to see the thing felled like some giant pine tree, with scrappers yelling "TIMMMMMMBERRRRRRRR!" as their torch cut through the last bit of the trunk to bring it earthward for dissection into bite-size pieces. This still has not happened.

Actually if you go and look closely at the western face of the watertower sometime, you can also see an old GM logo fading through the newer Sybill paint job.

Here is the interior of the power plant, now almost a decade later:

As you can see, certain support beams have been notched-out to eventually bring down the rest of the structure via gravity, and the valuable steel it holds.

So anyway, there was a ladder going up into the watertower, so I climbed it.

Every so many feet there was a landing, where you had to switch to a different ladder:

I assume this was a safety feature. Possibly stipulated by a union, in order to facilitate the taking of breaks, haha. And of course to prevent anyone from executing a complete fall of the entire structure.

I would guess it was every 30 feet or so:

No, but seriously...a climber's job is f@#$in' hard. And dangerous. I speak from experience.

Another landing, this one with a hole carved in the side:

Shall we take a look outside?

We're looking at the bottom of the reservoir now:

Looking up the access tube through the center of the reservoir...someone has cut another little access door in the side of it:

I decided to go that way before heading all the way to the top...the bottom was so sloped that it was almost impossible to sit down without sliding to the center:

Looking up, there is the big "piggy-bank" slot that someone was nice enough to carve into the top with an acetylene torch, so I wouldn't have to take flash pictures:

Also note that there is an additional ladder on the outside of the access tube, I presume for doing cleanouts and whatever.

Kind of hard getting a shot looking straight up into the glare, but you can see there are some more smaller holes, and a series of cables dangling, perhaps once used to give depth readings:

Because selfies are f@#$ing lame.

Now at eye-level with the slot, I could see a preview of the awesome panorama that awaited me up top:

Popping out of the hatch at the top of the watertower, I now had a 360-degree view:

And now for some zoom action...the old McLouth Steel, and Atlas Foundry Co.:

In the background you can see Great Lakes Steel's Ecorse Mill:

I talk more about Great Lakes Steel in another post.

View out to the Ford Rouge Plant:

The Port of Detroit warehouse, better known as the Boblo Terminal:

Look close in this one and you'll see parts of the Packard Plant sticking up:

Looking north, up to Southfield and Troy:

Barren Delray, with Edgar's Sugar House No. 5 seen at center:

C.F. Smith Co.'s warehouses, with New Center in the background:

One thing that was pretty incredible was that on this windy day I could really feel the tower moving, almost like a tree. Not for the faint of heart. 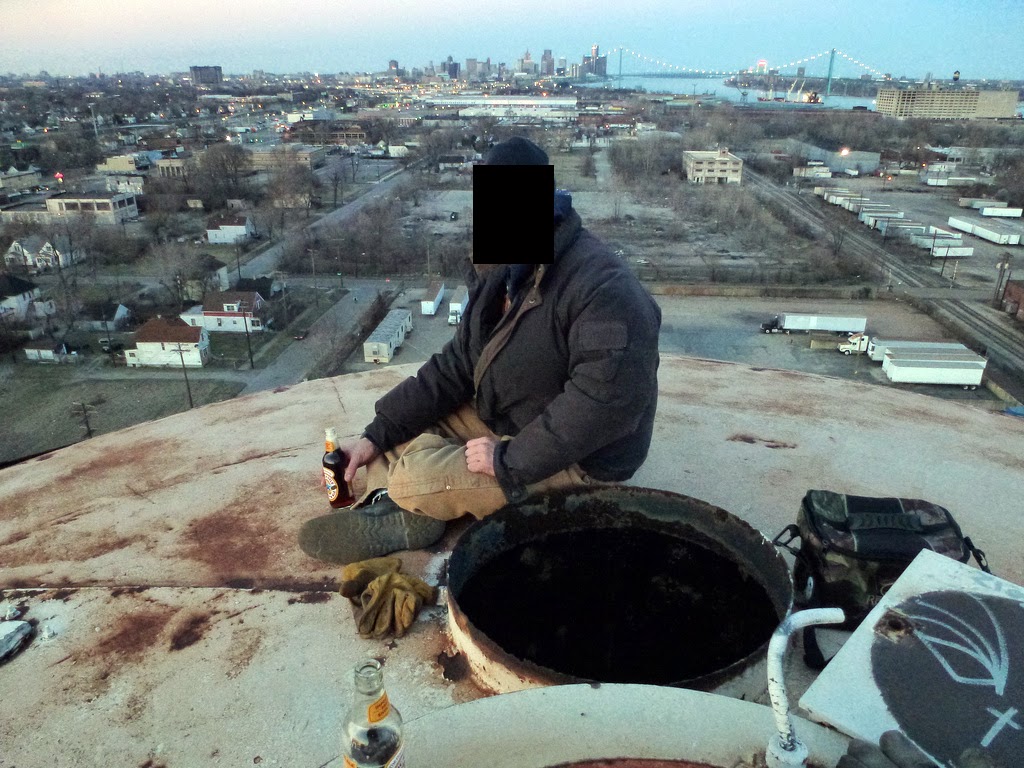