Luben' the Wheels of Conspiracy

Remember this place? The address is 234 Watson, and the name was the Luben Apartments—though, predictably, it was more commonly known as "The Castle." At some point in 2005 or so, Chisel and I felt like giving the place a once-over. According to a post on DetroitYes, the Luben was built in 1901 with a Casota limestone facade, and was designed by Detroit architect Edwin W. Gregory. Gregory also designed the Albert G. Boynton residence in Detroit, as well as a flat on Greenwood at Hancock St.

It was pretty much a wreck inside; typical Brush Park fare:

The Luben was quickly demolished on November 28, 2010, a mere 12 hours after a suspicious blaze consumed it. Detroitfunk has some of the last photos of it standing HERE. Supposedly the building was recently purchased by a new owner with "intentions" of renovating it, but they immediately went bankrupt, and a week or two later—poof! Up in flames.

The outer walls were still basically intact and could probably have been stabilized easily, which would have most likely made it more attractive to a potential developer—at least the front facade, anyway. Brush Park is a recovering neighborhood, and eventual renovation prospects for the Luben would have been fair.

But the architecturally salient front facade was ripped off by demolition crews and the rear was left standing while it continued to smolder—which prompted some to argue that the demolition was most likely done to prevent interference by that pesky historic preservation lobby. I'm a rabid preservationist myself but I think that theory is a little speculative, especially in light of the fact that the fire department most likely ordered the ruins to be abated for public safety reasons.

It would have been highly prone to collapse into the street, especially during a November windstorm, and there would have been little chance of securing the funding or logistics for a wall stabilization effort, especially if the owner lost the building to bankruptcy a week prior to the fire. No, the demolition was not conducted according to the typical DEQ rules (which require abating dust with a mister), but this was probably due to the fact that it would have been considered an "emergency" demolition, and that collapse was a more imminent public threat than air quality. As far as I have seen, it is not uncommon for the fire department to request excavators at fire scenes to help reach hot spots that need to be extinguished; this type of work is not considered demolition, it is considered firefighting. I would argue that such was the case here.

But then again, it is entirely possible that the DFD and the Kilpatrick administration could have been complicit in a conspiracy to dispose of both the bodies of certain "unwanted" individuals and certain "eyesore" structures in one fell swoop. Or perhaps someone felt that the FBI was getting too hot on the trail of Jimmy Hoffa, and his corpse was secretly exhumed so that it could be disposed of by incineration—a blaze that was handily aided by the gas company opening a main long enough to fully consume the Luben tinderbox? 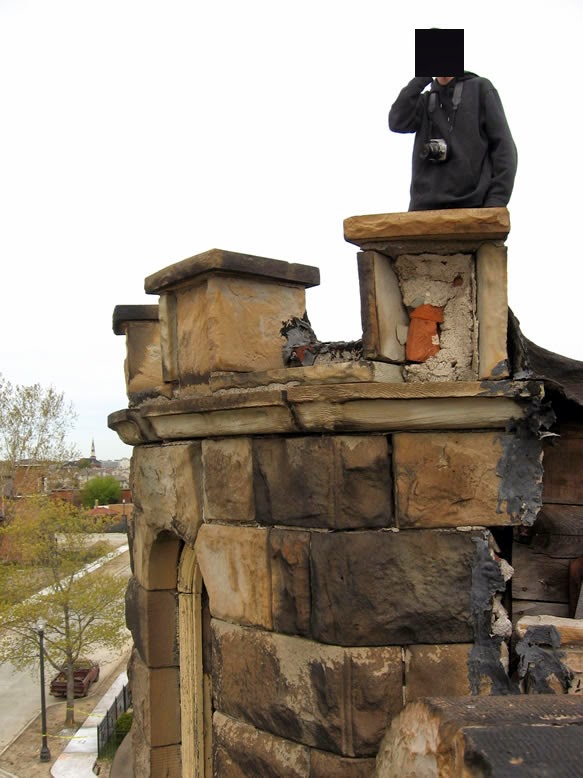 Wow, look at all the rooftops and chimneys of Brush Park:

Ready for some more conspiracy?

As I said, Judge Albert Boynton's house was designed by Edwin W. Gregory, the same architect who designed the Luben. Boynton was also a trustee of First Unitarian, and he lived at 72 Temple, within sight of the church. His house eventually became the Temple Hotel in later years, and as of May 2014 was demolished. The First Unitarian Church (2870 Woodward) was utterly incinerated by arson a few days later, and like the Luben (234 Watson), was immediately demolished because its facade was unstable.

Is it a coincidence that all three of these buildings that stood so close to each other and were all tied together by the same two men, met the same fate in such a short period of time? If you look at all these locations on a map you'll see that they were only one block from each other.

This historic photo from Kevin Mueller's Flickr page shows the Luben during the 1943 riots.

Yeah, so I walked across it:

...by balancing on the center wall, haha.

Here is a photo of the building from around 1976, from the Detroit Urban Conservation Project: