Though it was originally named the St. Clair Community Center, this fanciful c.1928 structure was later renamed for Clarence E. Brewer (b.1892-d.1964), a pioneer in the public recreation movement, and head of the Detroit Recreation Department during the city's best years.

Not to be confused with the also-abandoned Brewster Recreation Center. 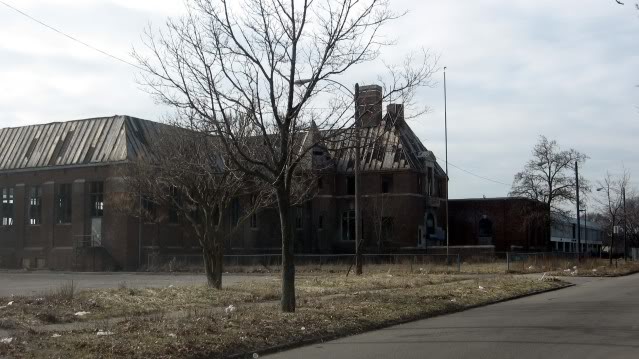 Brewer was apparently so notable a person in this regard that the University of Michigan's Bentley Historical Library saw fit to acquire and catalogue his personal papers from 1914 to the time of his death. There is little need for me to travel to Ann Arbor to delve into his life's work for the purposes of this brief post, and while I am positive it would be enthralling (as it has been while researching other great men), I feel the encapsulated biography of Brewer provided on the university website shall suffice here. 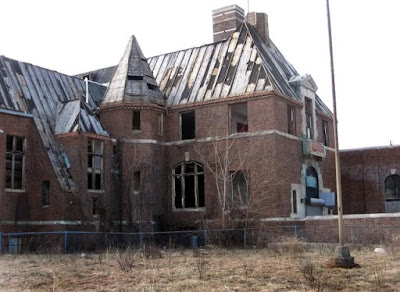 Brewer served as Commissioner of Recreation starting in 1920 to 1940, and as General Superintendent of Parks and Recreation from 1920 to 1942. I am not up on my history of Detroit city departments but I know that what now makes up the "PRD," or Parks & Recreation Department, is the result of different mergers and absorbing now-defunct branches (such as Parks & Boulevards) over the decades as city organization—and budgets—shifted. 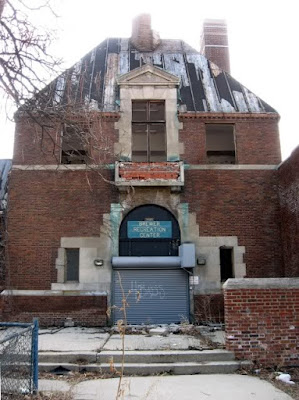 The Bentley Library asserts that Clarence Brewer was "one of the leading pioneers of the public recreation movement in the United States during the first half of the twentieth century," and despite spending 20 years in that capacity for the city of Detroit, he also went on to serve as a field representative with the National Recreation Association in New York as well as the Great Lakes area, earning "national prominence for his work in promoting community, industrial, and military recreational programs." 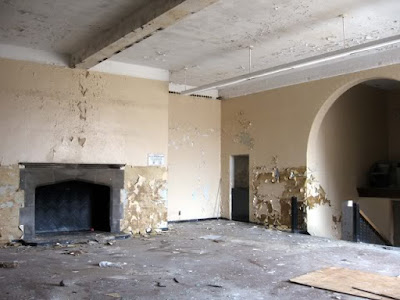 One would do well to note that the period of Brewer's service in Detroit coincides with the reign of another extremely important historical figure in the city, Frank Cody, Superintendent of Detroit Public Schools, who served from 1919 to 1942. Superintendent Cody (as evidenced by his unusually long tenure) is often thought of as the man who singlehandedly elevated the DPS to its position as a model system in the nation through the advances he initiated, one of which was the promotion of playgrounds and gymnasiums in the schools.

If you've ever marveled at what spectacular gym and other recreation / phys.-ed. facilities Detroit schools from this era came equipped with, Frank Cody was the man who implemented it (among a myriad other advancements). I have to wonder if Cody and Brewer got together at some point to trade notes on the topic of recreation facilities. 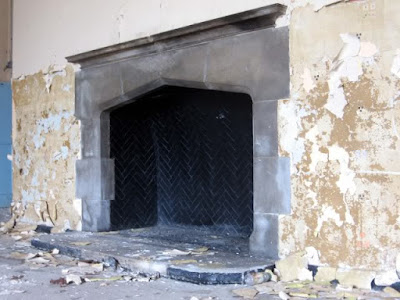 Prior to coming to Detroit Clarence Brewer also served as a community recreation organizer with the War Camp Community Service (WCCS), which was organized during World War I by the Playground and Recreation Association of America at the request of the U.S. War Department. The original purpose of the WCCS was to provide constructive leisure time activities for servicemen by developing the recreation facilities of communities near the training camps in which they were stationed, though it was later expanded to include service to civilian defense workers as well. With the end of the war in June, 1919, the emphasis of the WCCS shifted to developing recreation activities for the general public. 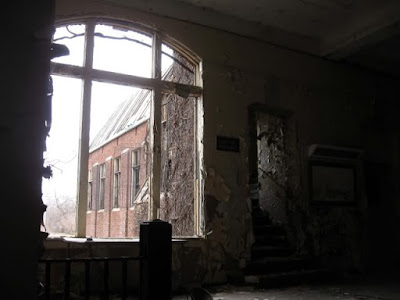 This room might have been a small library or reading room: 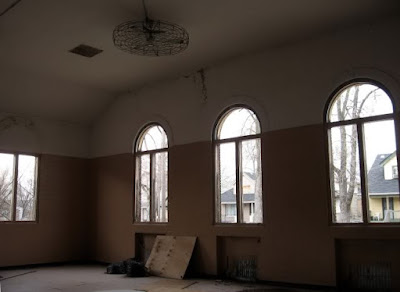 This building was designed by Raymond Carey, who according to one website was "a prominent architect in Grosse Pointe Farms," an affluent suburb nearby. 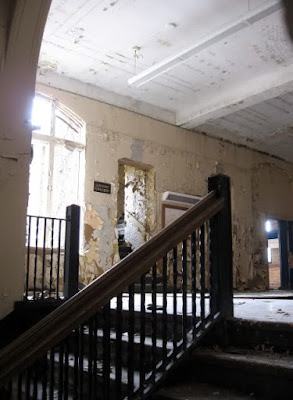 Mr. Carey was from Bath, England, where he grew up surrounded in some of the world's finest Georgian style architecture. It was because of him that the Grosse Pointes now have so many fine Georgian style homes. 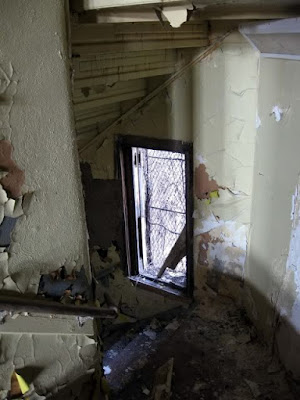 On the lower level was the boxing ring, but no, Joe Louis did not train here, he trained at the Brewster, not Brewer, Rec Center. I explored and discussed the Brewster Rec Center in great detail in another post. Another Detroit rec center with a huge boxing history that I have covered in detail is the Kronk Rec Center. 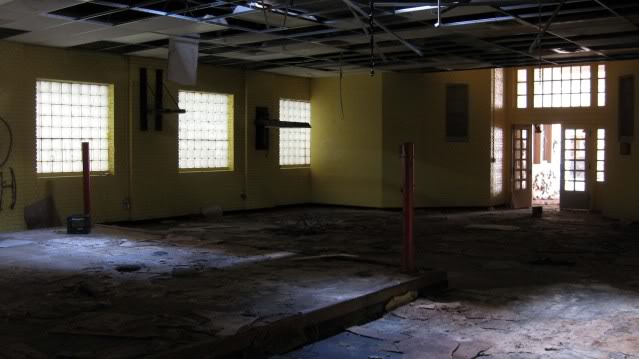 This scary plank was being used as a makeshift gangway for metal thieves to gain easier access to and from the roof: 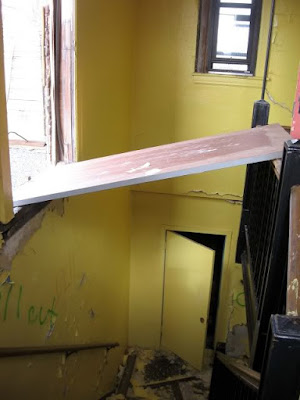 From the roof Joy Middle School is seen next door, which was the star of at least one TV news exposé on the apparent DPS policy of leaving behind vital student records, and the obvious identity theft dangers that it resulted in. The St. Margaret Mary Catholic School is visible in the background, as are the smokestacks of the old Federal-Mogul Forge: 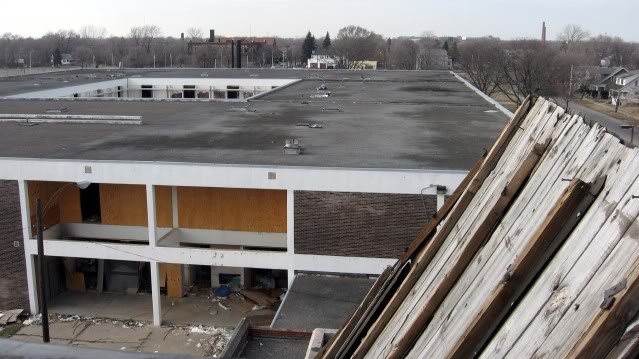 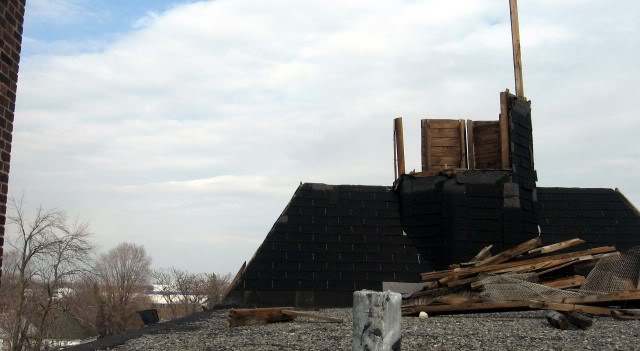 That's a little Alice Cooper reference for ya by the way. 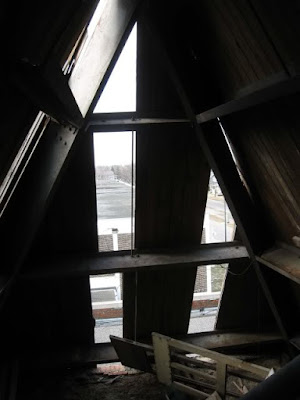 Brewer Rec Center had a huge copper roof on it, making it a prime target for immediate scrapulation once the city closed it in June, 2006. They may as well have held a ribbon-cutting ceremony for the scrappers, or painted a target on it...the place never stood a chance. 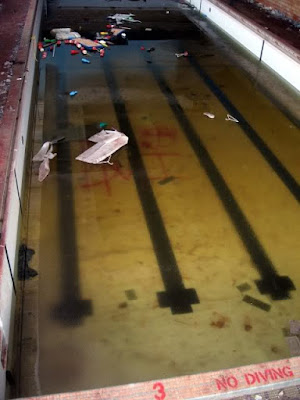 The copper and iron pipes that fed the pool probably also made a nice haul as well. 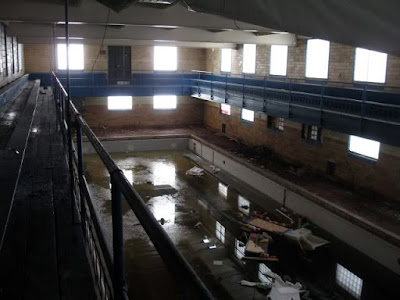 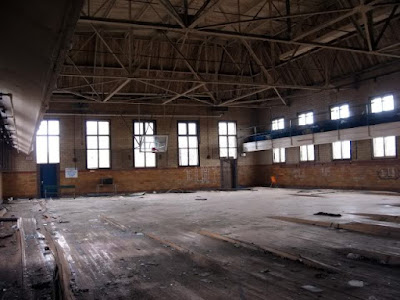 My colleague Andrea at Telling the Stories of Detroit Parks also covered this park's history in more detail on her blog.