There's Two Sides to Every Schwarz

Today this frontage along Fort Street is mostly gone. Basically, everything from right of center in this shot is demolished. 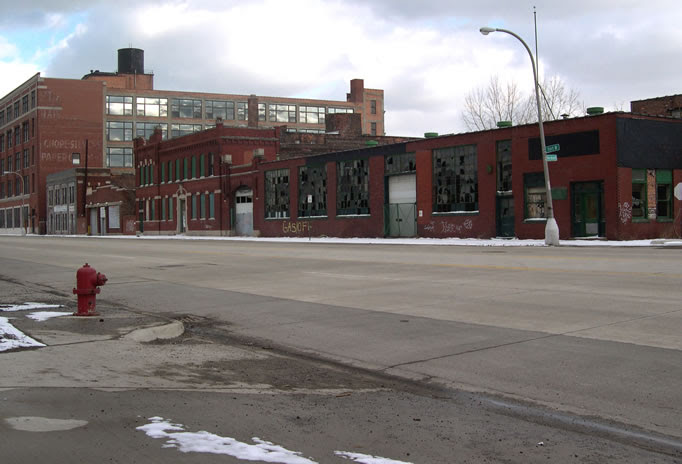 Chisel and I approached from the rear. The curved wall of the building seen below usually indicates that a railroad spur would have originally hugged the property in that spot: 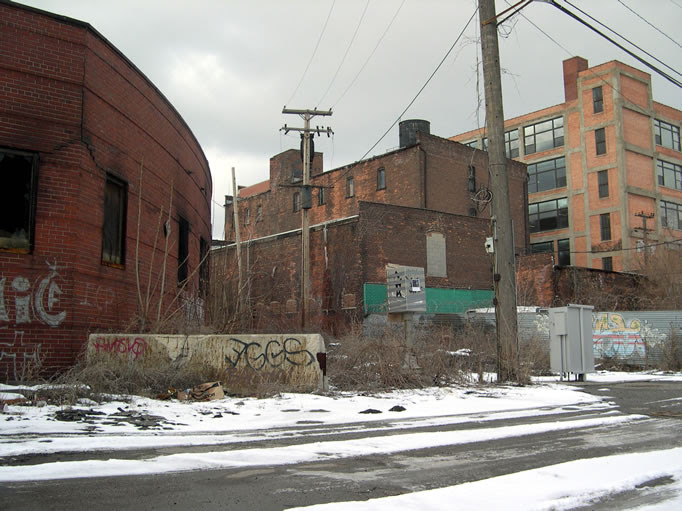 This place was one of the many remnants of the industrial riverfront legacy of Detroit that mostly predated the birth of the auto industry, and included many metalworking concerns. The west riverfront was home to a myriad of copper and brass foundries as well as iron and steel firms, owing to the booming stove-making business that carried Detroit before the automobile (and to the burgeoning mining industry in the Upper Peninsula that I have talked about extensively in other posts on this site). 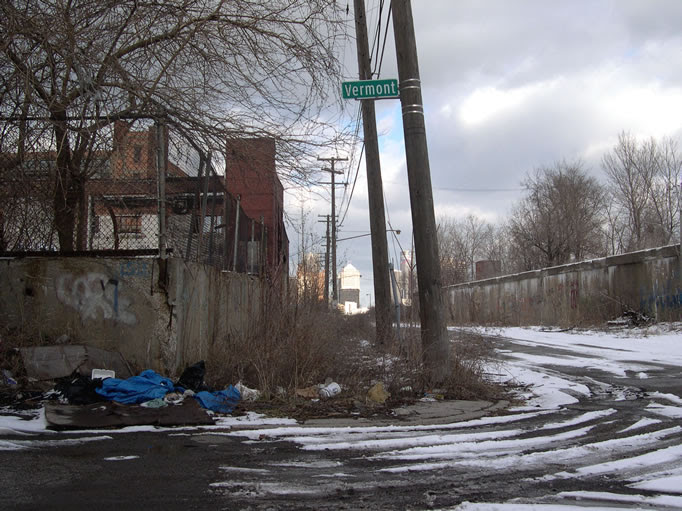 For most of my lifetime the west riverfront has been left to its own devices however, taking on the appearance of the stereotypical blighted "Delta City" landscape. 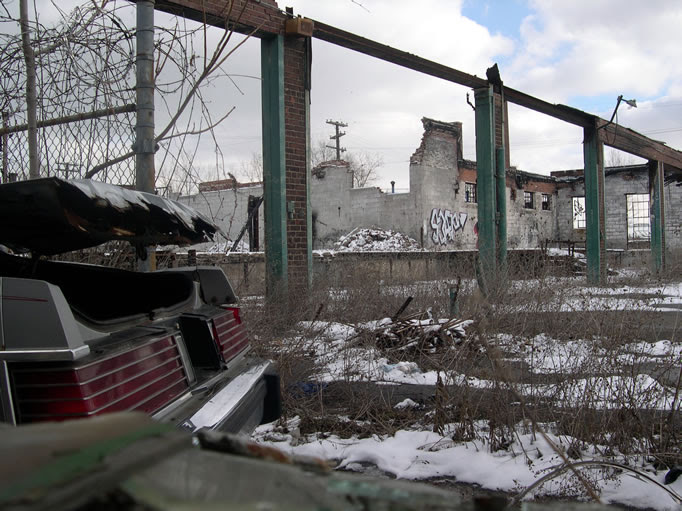 But as you can easily discern from the ghost sign at the top of the building, this place used to be the Schwarz Foundry Co.: 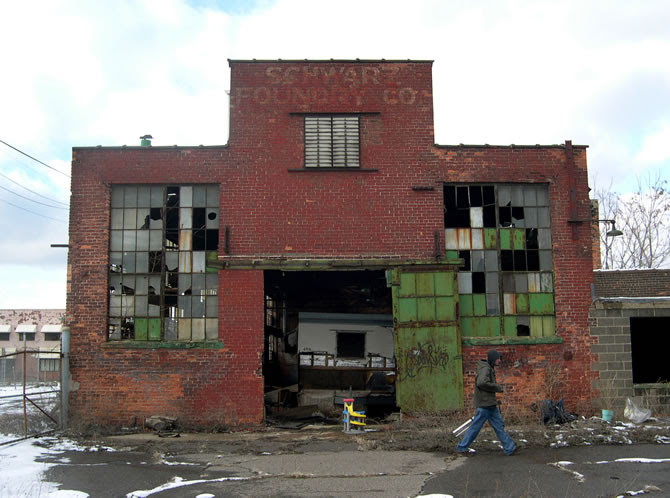 That is our key to its past.

According to Detroit historian Clarence Monroe Burton, Frank Schwarz Sr. came to Detroit from Holstein, Denmark, and established a foundry here with his two sons in 1906. 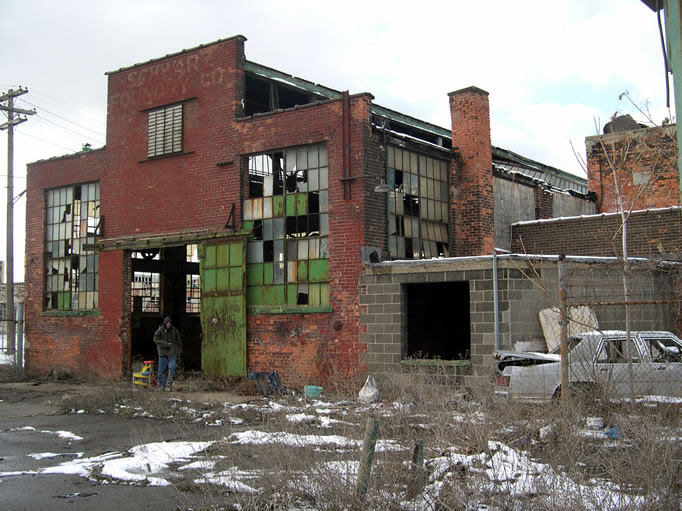 Burton goes on to say that Schwarz Foundry did contract work making tools, fixtures, and machinery; besides having a reputation "second to none" as foundrymen, they were also engineers, designers, and pattern-makers, having built "some of the finest machinery to be found in the United States today." 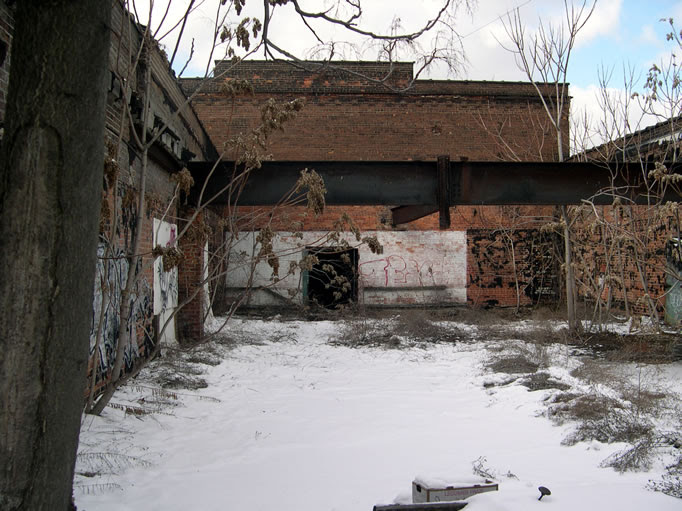 One of the sons, Elmer H., went on to become a prominent businessman concerned with trade conditions and business progress in the city, and sat on the Detroit Board of Commerce, Employers Association, Credit Men's Association, American Foundrymen's Association, Detroit Auto Club, as well as the Friendship Lodge A.F. & A.M. 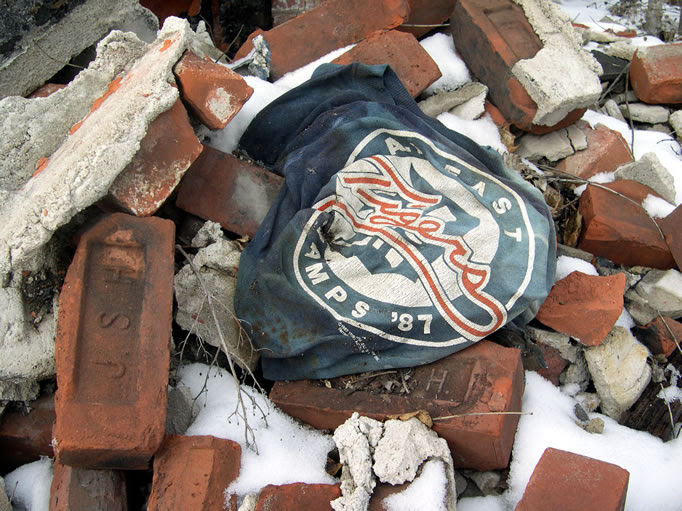 Burton states that "the name of Schwarz has long been an honored one in Detroit, standing for progressiveness in business, loyalty in citizenship, and for integrity in every relation in life." Their patriotism was displayed by the fact that during the World War, they operated their foundry at 98% capacity for its duration, to aid the war effort.

It is worth noting however that American industries made astronomical profits off of war production during WWI, signaling the U.S. rise as a world economic power. 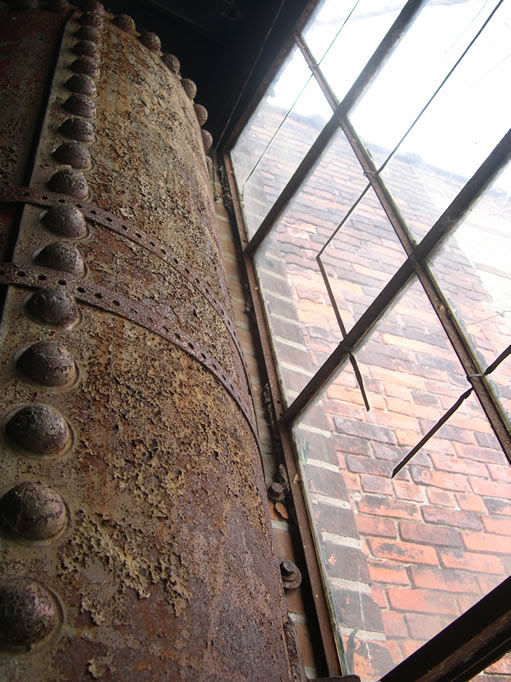 We were marginally surprised to find that there was a full-size trailer home parked in here, of course stripped of its aluminum outer shell: 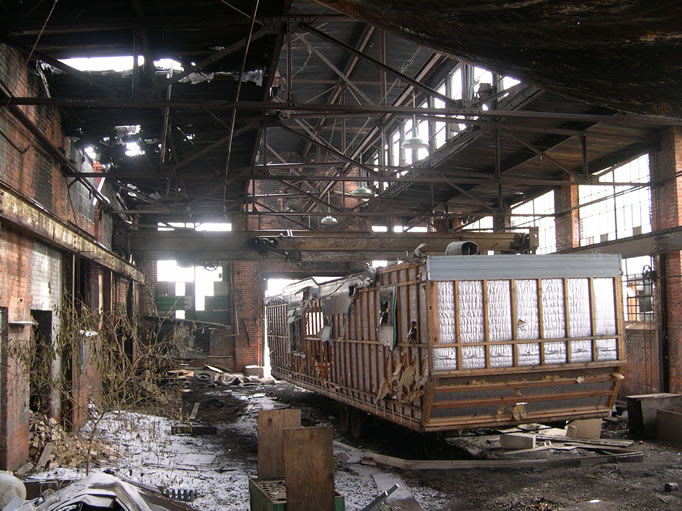 The front office portion of the plant featured the typically richer appointments found in plants of this age, with nice wooden staircases and millwork: 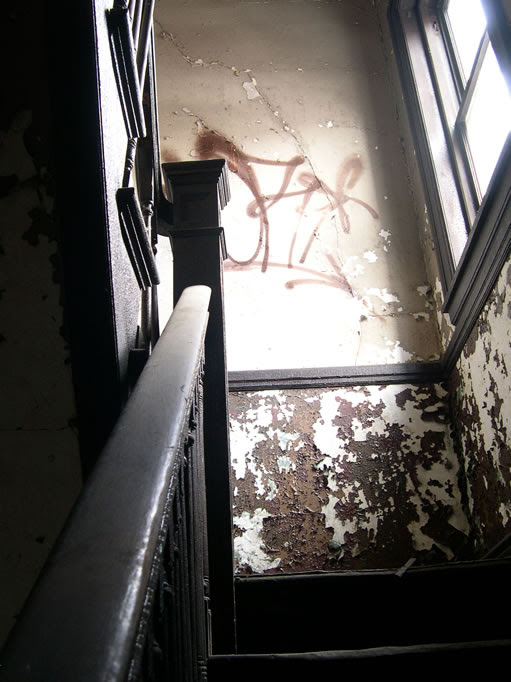 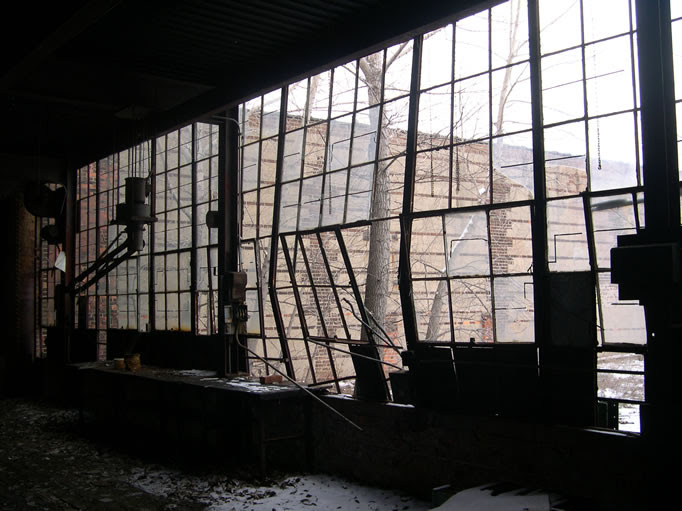 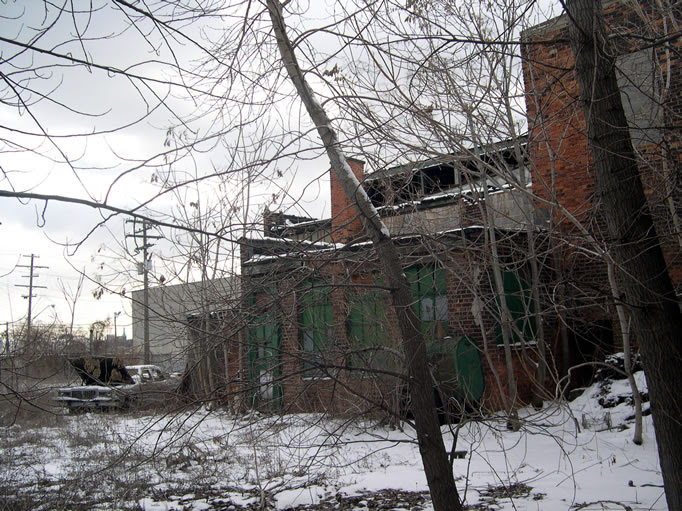 Next-door is visible the ghost-sign of the old Chope-Sievens Paper Co., now converted to lofts: 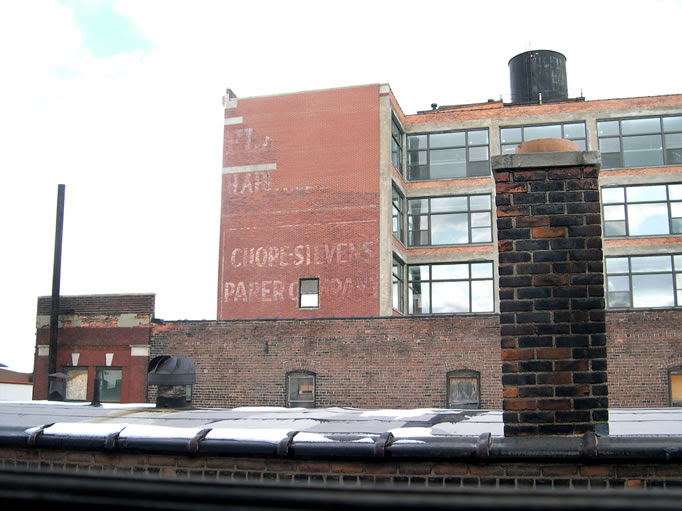 Burton tells us that the founder of that company, a Robert L. Chope, got his start as a messenger boy for a bank, and "invented a paper coin wrapper." I don't know exactly whether Burton means the paper wrapper itself, or a machine that would wrap coins in paper (or for that matter, a wrapper for paper coins), but it sounds like a pretty important invention. That building also served as a warehouse for the Hudson's department store.

Yet another ghost sign, not easily visible from the street...Beck Cereal Co. Mills: 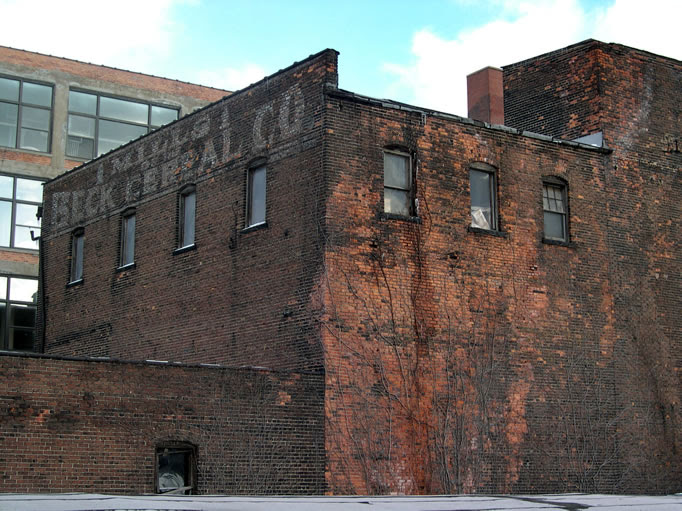 ...Hey, to think that all these many empty buildings in the city once had just as many companies to occupy them! According to Battle Creek, Michigan; The Cornflake Crusade, flakes of corn, wheat, rice and oats had been manufactured prior to the birth of the breakfast cereal industry, for various industrial purposes. "A toasted oat flake was produced by the Beck Cereal Co. of Detroit in the 1890's. Rolled oats were made by the predecessors of the Quaker Oats Company, but they were not ready to eat. They were hot cereals requiring home cooking." Even Clarence Burton mentions Beck Cereal in his Volume IV, saying that the company produced under USDA license and played an important part in meeting wartime demands for food during World War I.

These black & whites are a couple photos of the building I found in the DUCP photo collection, from 1976. 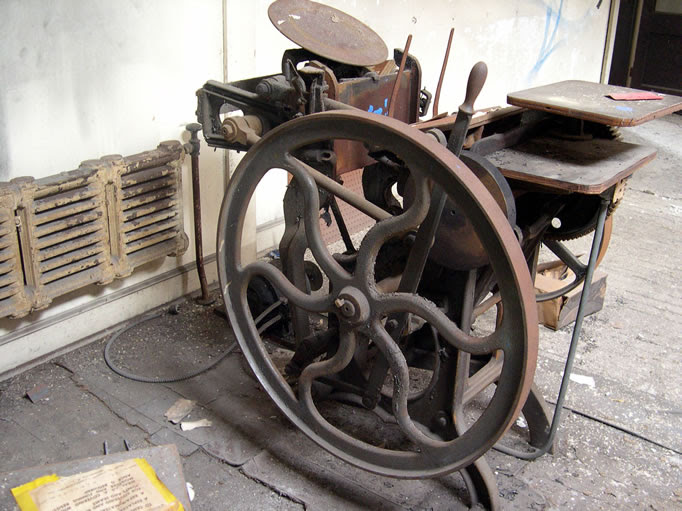 It didn't even have a USB port...better get a picture of that. This portion of the building survives today, but has subsequently been gutted by a fire. 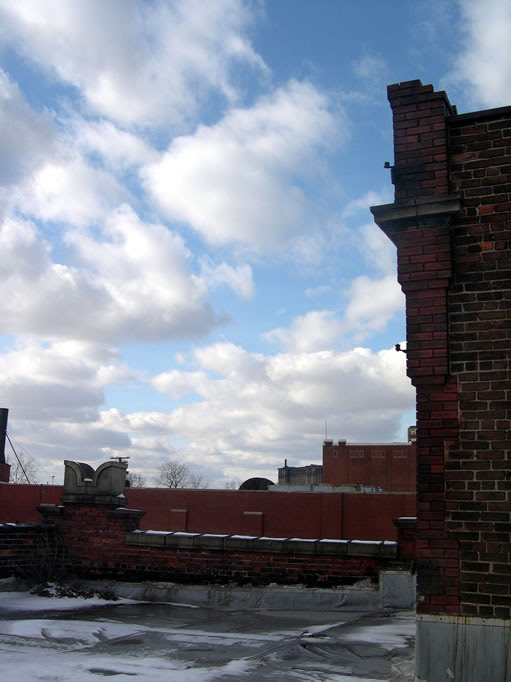 Okay, who got the Spaceballs reference?