This one was infamous as "that cat piss building" amongst downtown explorers who remember it, and those who do probably only visited this oversized litterbox once and never again. For as long as I can remember the only way inside was via a small hole in a board at ground level that you had to squeeze through on hands and knees, that brought your face into dangerously close proximity with cat feces and cat urine and the sickening leavings of rotten cat food that some allegedly homeless alleged cat lady was allegedly supplying for the colony of cats who lived inside.

It was truly putrid and was one of those experiences that you could wear on your sleeve as proof that you had earned your stripes as a skyscraper snooper. It was just a wretched, wretched, absolutely necessary evil that you swore you would brave once and never have to endure again for such an apparently plain building. Thankfully, once you made it above the second floor the horrendous, impenetrable stench of cat waste dissipated to a more comfortable level.

Why tolerate this punishment, you ask? The seven-story Film Exchange Building was not just historically funky, it was also historically important because Detroit was the first city in North America to erect a structure devoted specifially to the motion picture industry, according to the book Detroit's Downtown Movie Palaces, by Michael Hauser and Marianne Weldon. It was built and opened in 1926 and was designed by the famous Detroit theater architect C. Howard Crane, of course. Crane designed around 250 theaters nationwide, about one fifth of them right here in Michigan.

A c.1916 article in The Moving Picture World, Volume 29, suggests that Detroit's Film Exchange Building (FEB) was ten years in the making, when several heads of the local film trade and real estate investors met to discuss the proposal of building such a facility downtown.

According to the book Boxoffice Open: Michigan's Small Town Movie Theatres by Michael V. Doyle, the FEB featured a screening room, film vaults, regional offices for major motion picture companies, booking offices, distributors, and collateral businesses such as provided peripheral things for the industry, like movie posters and press materials. Retail stores lined the Montcalm and Cass Avenue sides of the building on the first floor, and offices and lofts were above that, Doyle writes.

Which is very interesting except for the fact that every word Doyle wrote regarding the Detroit FEB on page 9 of his c.2007 book is plagiarized almost verbatim from my colleague Navi's c.2007 webpage about the FEB, which happens to be his favorite building. Not only that but the photo of the building Doyle published on page 9 is clearly Navi's original photo, and is not credited—hardly behavior becoming of a Professor Emeritus at Michigan State University.

Here, you can see the fanciful crest above the main entry of the building, depicting two allegorical figures adorned in the symbols of the film trade; various reels, a projector, and film, though one of them has been decapitated...in the center of the escutcheon are the letters "FEB"...I am tempted to say the coat of arms looks like it was the work of Corrado Parducci: 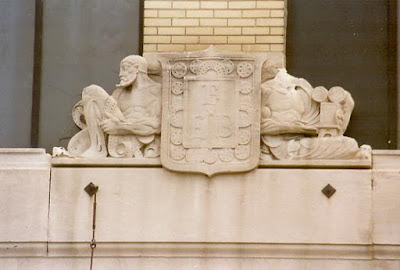 Anyway, Navi (who researched all his information at the Burton Historical Collection of the Detroit Public Library but unfortunately no longer has the article citations), notes that the Detroit FEB was the first of its kind, and many other cities soon built similar film exchanges of their own.

I'm not sure where Doyle got the rest of the information he talks about in his book, but he goes on to say that the major film companies would normally lease an entire floor in an exchange building, though the biggest ones, like Paramount and Fox, often had their own entire building. Smaller studios like Columbia Pictures, RKO, and United Artists would often rent half a floor each. 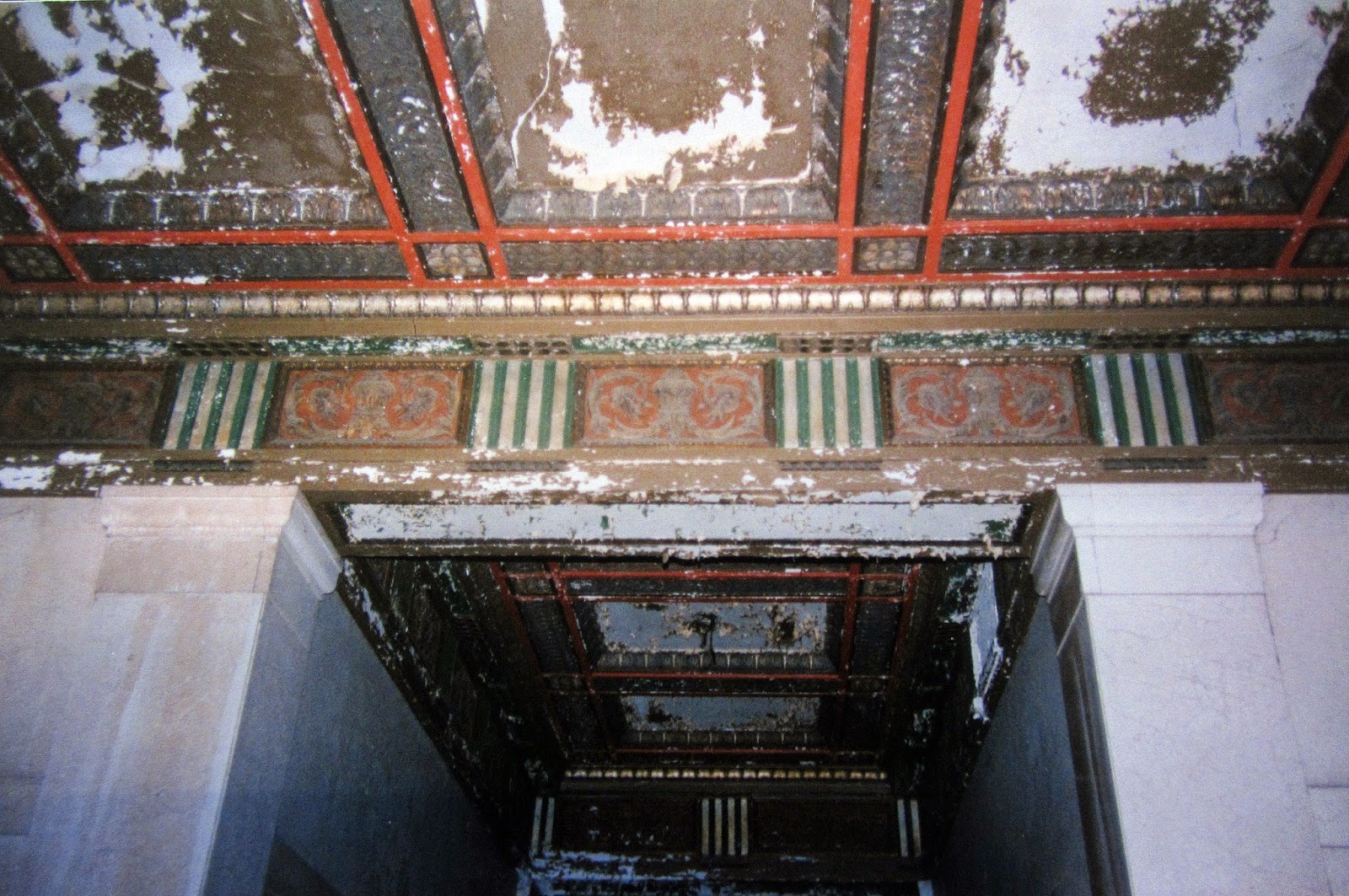 I should have taken a photo of the area of the floor that was completely covered in a six-inch-deep layer of revolting filth that mostly consisted of old paper plates that had once had cat food served on them (and the empty cans that it came in), all left behind by whatever psychopath would painstakingly raise an army of feral cats in an abandoned skyscraper in Detroit, but I just wanted to get out of there as fast as possible.

The entire area was swarming with the furry bastards—hundreds of them, as well as some deceased ones—all drawn here by the handouts that this homeless super-villain mastermind had provided...I'm not sure how a supposedly homeless person would be able to afford all these hundreds of cans of Whiskas, but why unseat a perfectly good urban legend? What made it even more horrific was the fact that the first floor is totally sealed up, so there is no light or fresh air coming in from anywhere, and you just hear them rustling around in the dark on their filth-crusted pie plates all around you.

I also heard the vacant Blenheim Building nearby was likewise infested with cats. My eyes were beginning to burn, and my stomach preparing to eject it contents, so we hit the stairs.

According to Doyle, major film exchanges had a staff of 40 or 50 people, and Detroit's sales department had a manager and five salesmen in its heyday. "Then there were five bookers, each with a secretary," there was a cashier's office, and the general office, both of which were full of clerks and typists, then of course there were the inspection and shipping departments.

Every film reel that was leased out was inspected for damage upon being returned, before being sent out to the next theater or returned to the storage vault. And because film was a highly inflammable material, it all had to be inspected and stored in heavily fireproofed areas, hence the vaults.

Note the old Beck's Beer ad still visible on the side of the Hotel Ansonia to the north in this 2004 view: 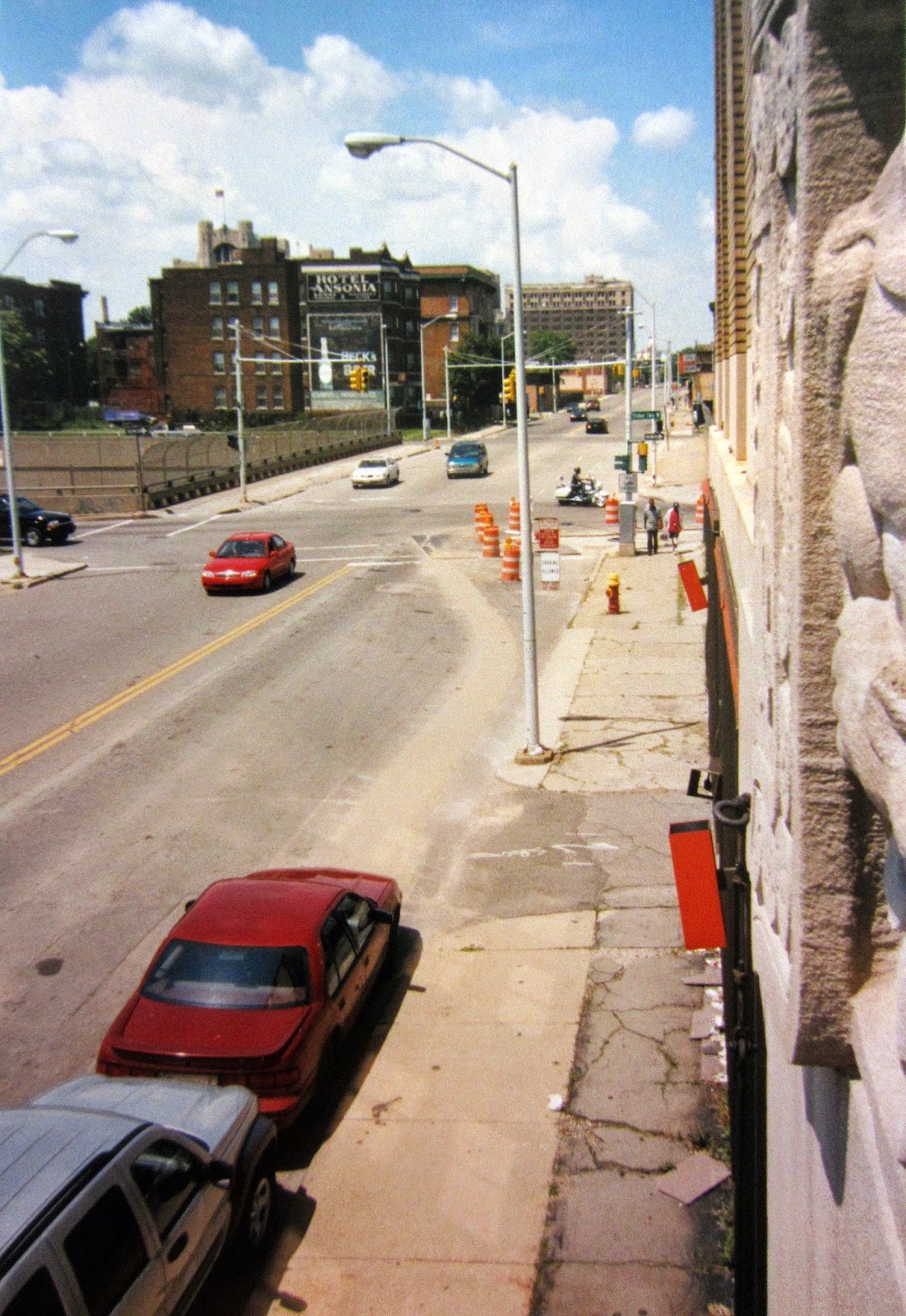 Chisel inspects what I believe are one of the film vaults, but currently seemed to be housing Civil Defense Survival Water drums as opposed to film canisters: 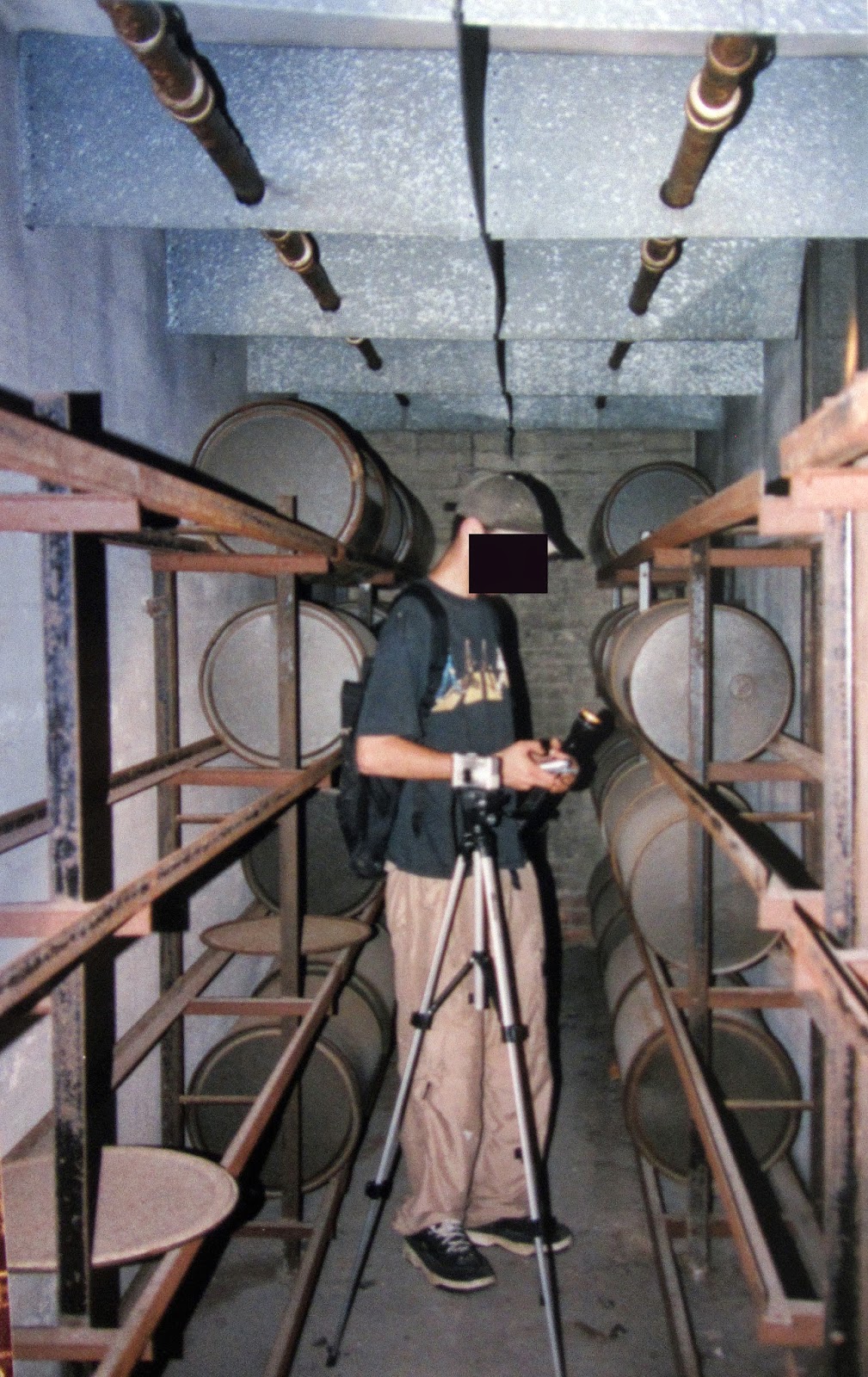 The pipes overhead were probably part of the sprinkler system.

Doyle explained that the Detroit exchange not only handled Detroit city, but serviced all of the Lower Peninsula of Michigan—over 600 theaters! So every single little small-town theater in Lower Michigan had each and every one of their movie reels, serials, and newsreels shipped from this building on Cass Avenue. The Upper Peninsula was served by the Milwaukee office.

The screening room in a film exchange building would be leased to an entrepreneur, "usually a union projectionist," and screenings were held for censorship, for viewing by film critics, and for theater owners so they could sample movies before selecting them.

David Kohrman asserted after his visit in 2007 that "if such a room existed, it has long been swept away. The only hints of its film days are some old movie posters plastered on a wall and the remains of concrete storage vaults."

These plain column capitals at the top floor were all of the ostentation that adorned this unusually staid example of C. Howard Crane's work: 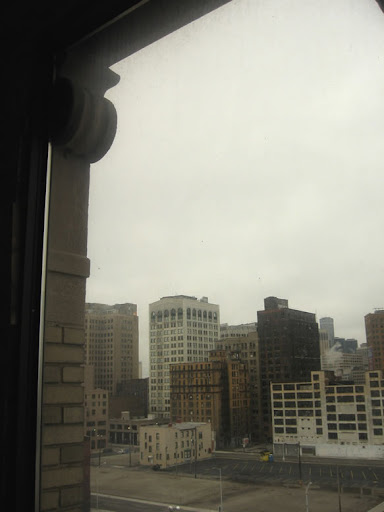 Finally, on the roof, some fresh air.

I imagine these were the outlets or intakes to an extensive vent system for all the film storage vaults in the building...remember, film is highly inflammable, and if I'm not mistaken exudes some pretty nasty fumes.

Chin Tiki's, and other now missing buildings in this view: 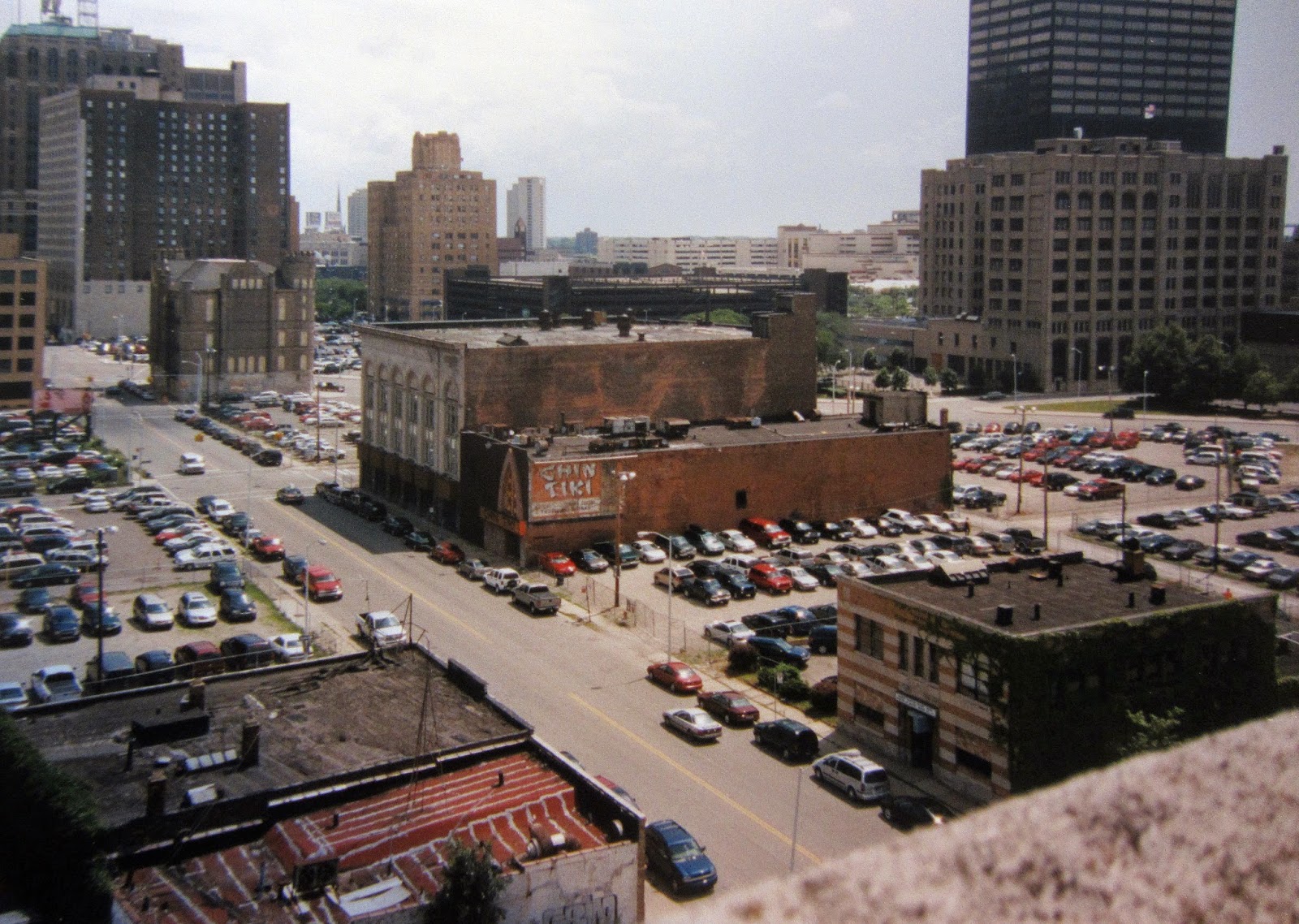 The demolished Hotel Vermont can be seen in lower right of this shot, as well as a pre-renovation Iodent Building: 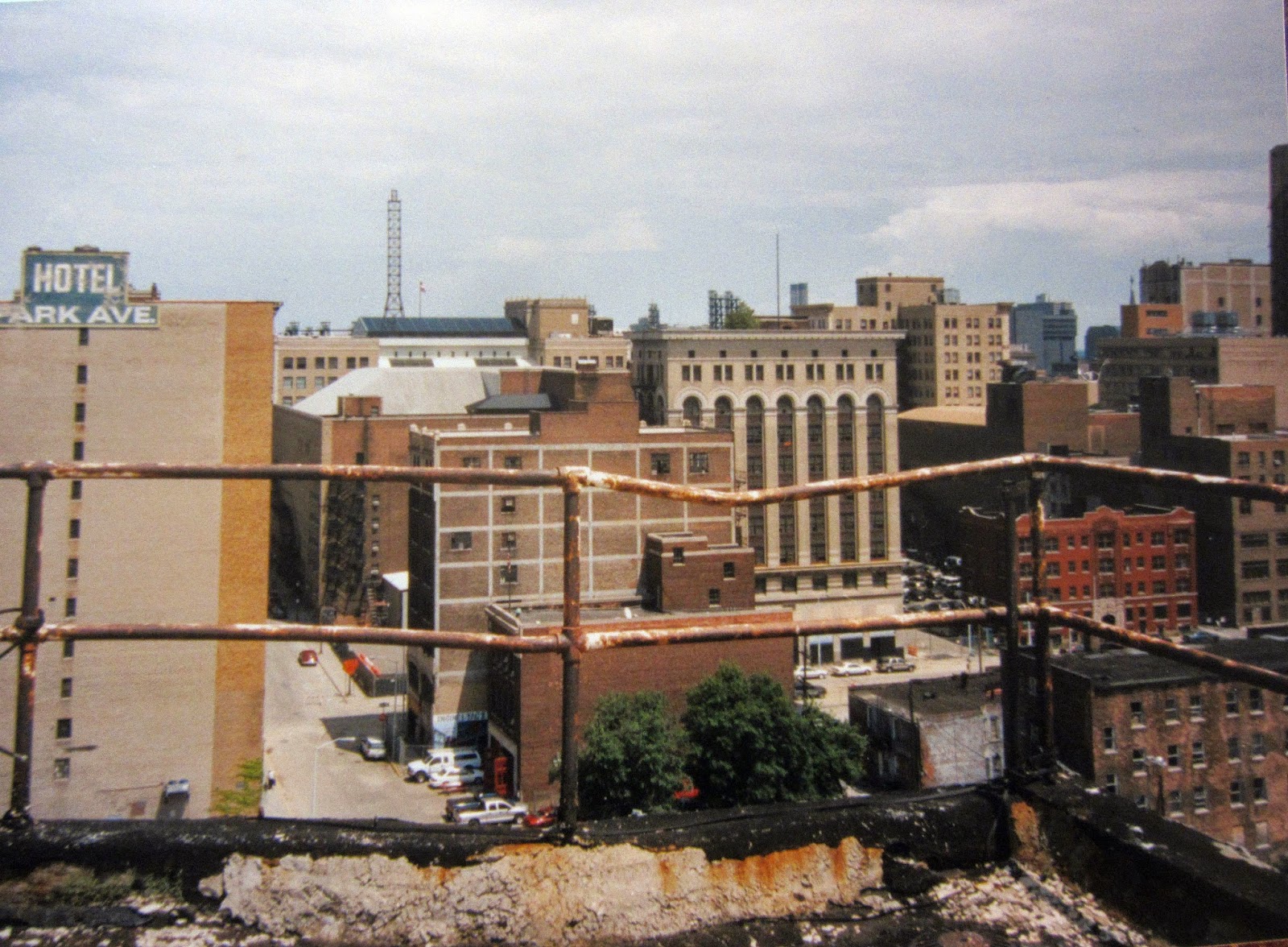 Old Cass Tech and Old Tiger Stadium both visible in this 2004 shot: 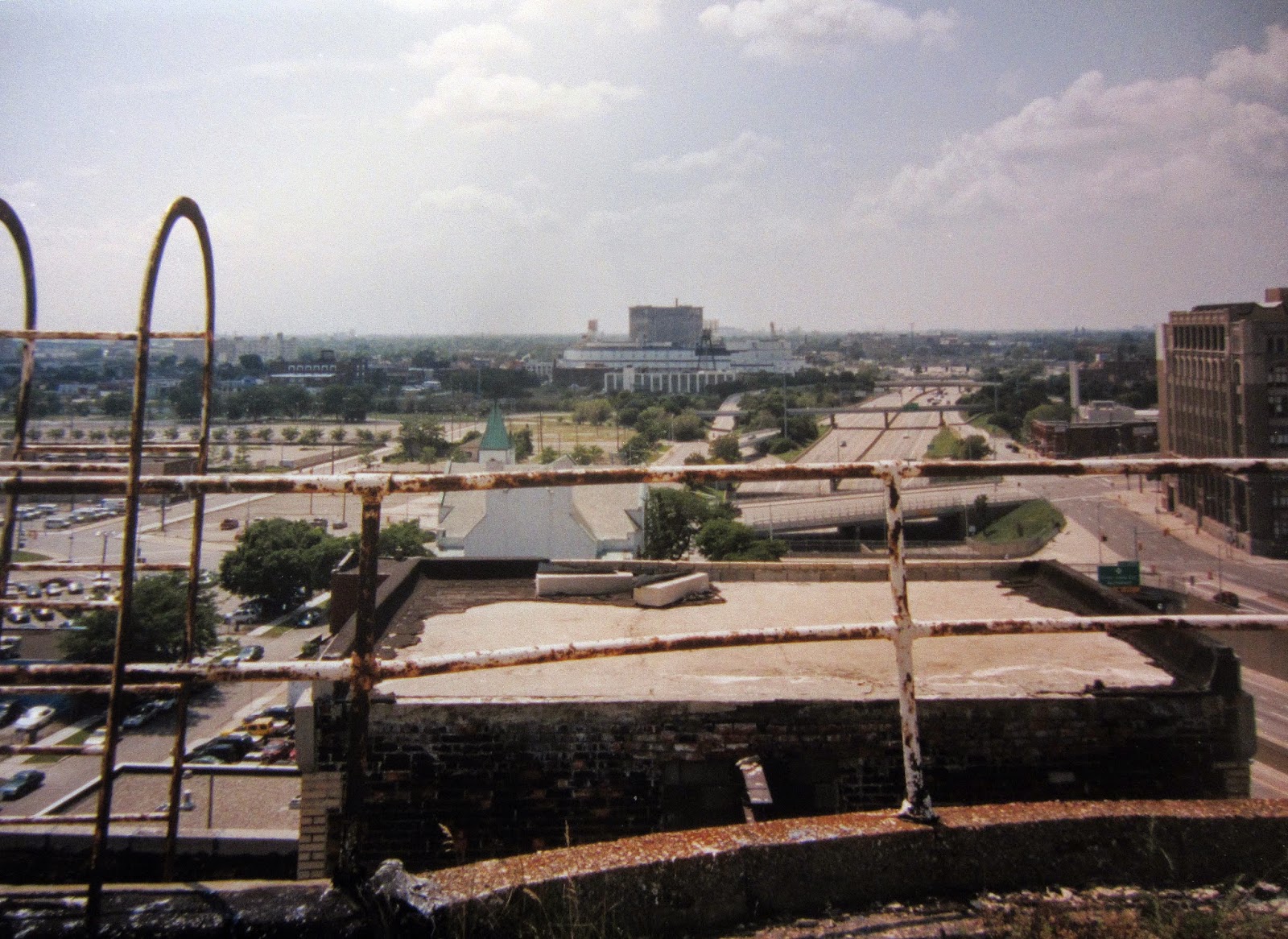 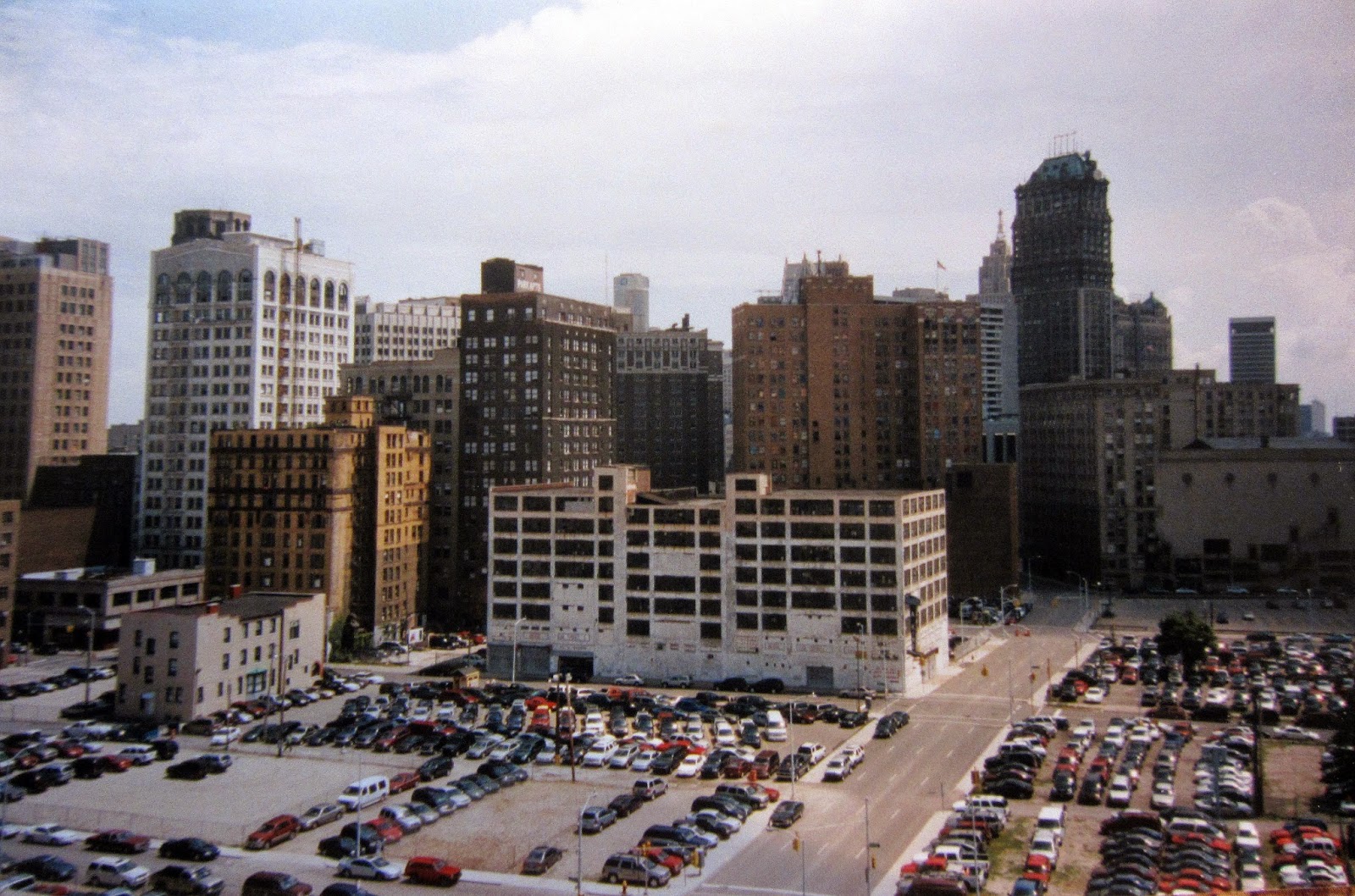 The abandoned Hotel Fort Wayne can be seen in this shot:

The website detroit1701 speculates that during the Great Depression, since the great lavish movie palaces that once constituted C. Howard Crane's main source of income were just no longer being built anymore, he subsequently emigrated to England where he made a living designing factories. 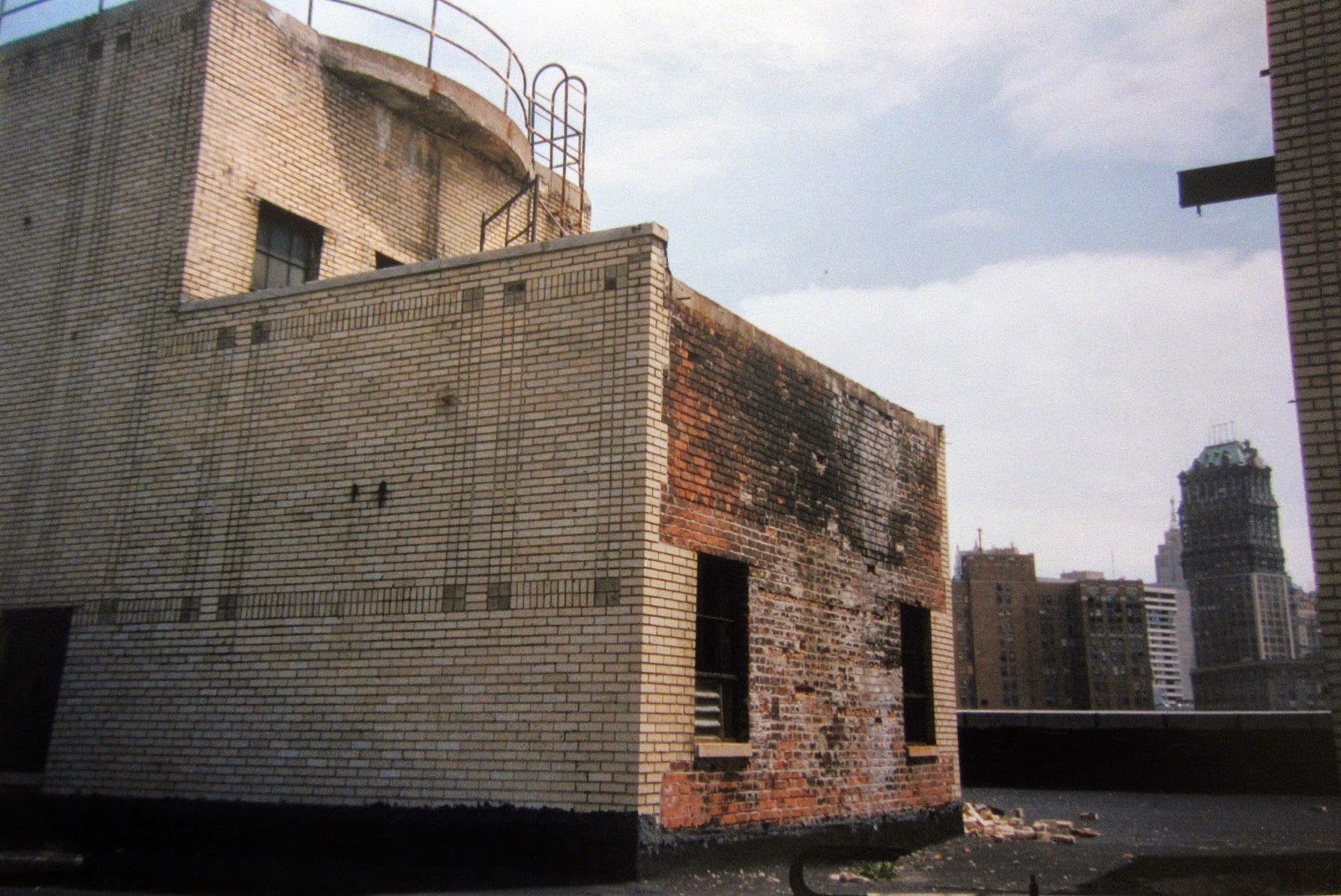 In the 1950s, changing technology and practices in the film industry negated the need for film exchanges, and this building was converted to a standard office building. But, as with every other office building in downtown Detroit, it was vacant by the late 1970s and has lain unused ever since.

This building was sealed up in around 2005 and remained so until 2007, which was when people started going back in again. I am not exactly sure why I made a return trip into this foul hellhole myself, but it was probably because I was using a digital camera by then instead of the 35mm I was rocking on my first trip, and for some reason I thought that the cat colony would have moved on and its reek dissipated by now, given that the place had been kept diligently sealed for a couple years.

But the fact is that the stink had not in fact left the premises yet, and lingered on in the way that only cat piss can. It had improved somewhat, but it was still there. Those two factors—the ungodly miasma and the fact that it has never had easy access—have kept most of the curious explorers and taggers out. Myself, I can't even look at the place without my brain instantly associating it with the acrid scent of cat piss. Where the feline army of the night and its infernal overlord went to after their diabolical plans of overthrow were inadvertently derailed by the property owner sealing up their Fortress of Soil-itude I cannot say for certain, but they are still out there, somewhere....

In 2009 the building was painted all white...and I'm not sure anyone can really fathom why. In 2017, following the opening of the new Little Caesar's Pizza Arena, this building (while surrounded in a sea of Illtich-owned parking lots) was put up for auction with a minimum bid of $2.25 million. Translation: it is probably about to become a parking lot.