The Huron River is one of the more major rivers of southern Michigan. According to the book Ypsilanti in the 20th Century the founder of Peninsular Paper, Daniel Lace Quirk, immigrated to Ypsilanti from the Isle of Man in 1860. Three years later he helped found the First National Bank of Ypsilanti. He also founded the famous Ypsi underwear factory, and was a backer of the opera house. When he died in 1911, he was the oldest working banker in Michigan. Not that I imagine too many people give up banking at a young age.... 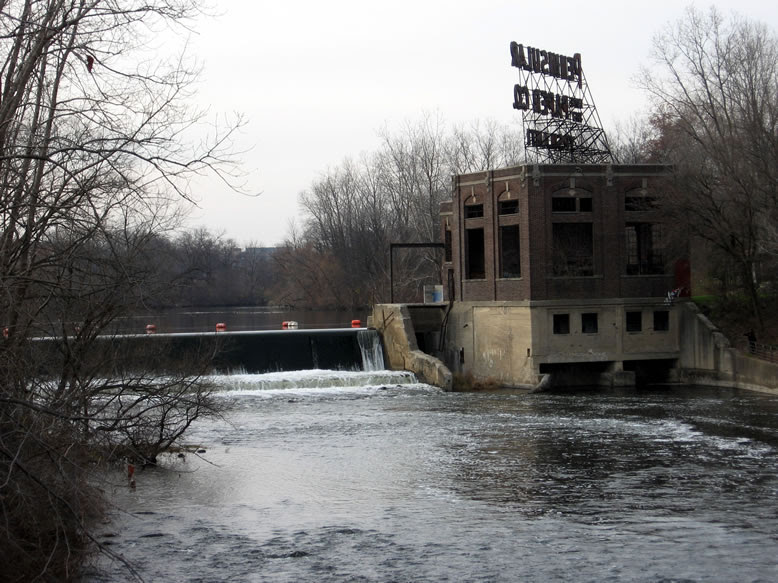 Quirk founded Peninsular Paper in 1867 with a contract to produce newsprint for the Chicago Tribune, which insisted that a second mill be built in a separate location from the first, so that in case of fire production could continue uninterrupted.

Another book by James Thomas Mann states that Mr. Quirk built this second mill on the north side of the Huron River in 1873, and sure enough it was destroyed in 1898 by a fire. Just to show what nice guys they were, the Chicago Tribune cancelled their contract with Peninsular as soon as they learned of the fire. Despite this, the company continued to operate until 2001. 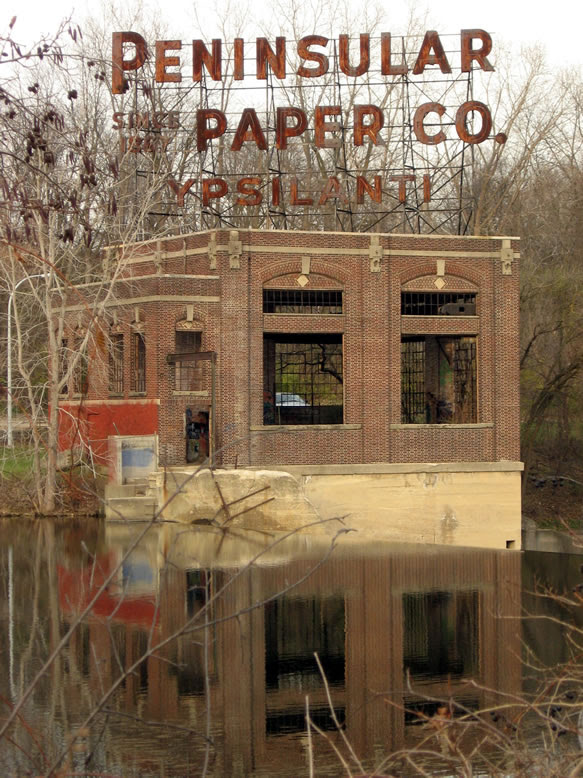 Papermaking in Ypsilanti did not begin with Peninsular however, as an article at YpsilantiCitizen by Laura Bien shows. She explains that the first paper mill was built here in 1856 by Cornelius Cornwell, and supplied several newspapers in Michigan. Cornwell's mill did not use hydro power however, and in 1923 its massive eight-ton steam engine was bought by Henry Ford. Today resides in the Henry Ford Museum. There were two other paper companies as well, operating elsewhere in Washtenaw County.

An article at YpsiGleanings by Alvin Rudisill states that the Quirk family controlled and operated Peninsular Paper for more than a century, until it was sold in 1974 to the James River Corporation in Virginia. 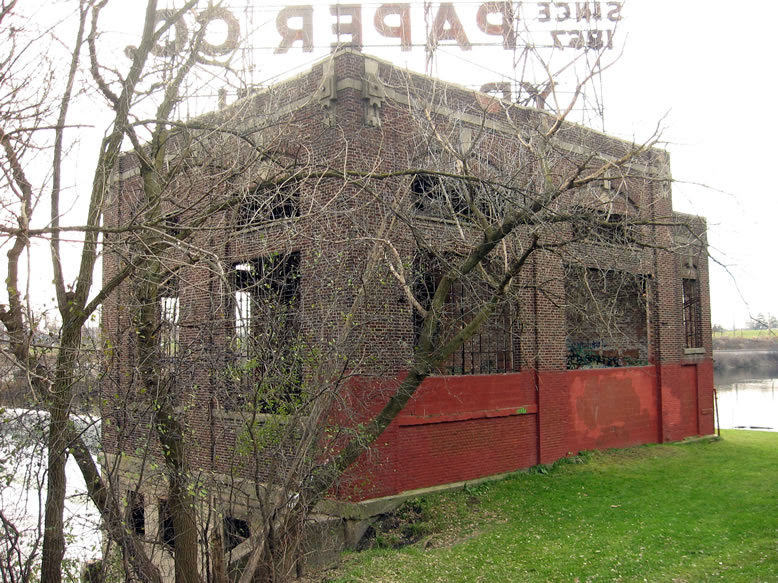 Peninsular Paper apparently had its fair share of structurally noteworthy dams--in the 1869 the Ypsilanti Commercial claimed that "...Peninsular Paper Company have built a dam probably unequaled in the Northwest," and though a replacement for it was built in 1914, it was washed away four years later when the Huron River flooded severely.

The third dam was designed by renowned Michigan engineer Gardner Williams, who had built several notable installations across the country, and even a dam in Siberia "that at the time was the longest multiple-arch dam in the world." Rudisill's article indicates that the Gardner dam and the small powerhouse we see remaining there today were built in 1918, outfitted at that time with two vertical Francis turbines, though the plant was taken offline in 1970, the water gates closed, and all equipment removed. The dam was decaying and reported as "unsafe" in 1979, though it was repaired by 1992. Production at the paper mill continued until 2001, probably supplied by commercial power from Detroit Edison. 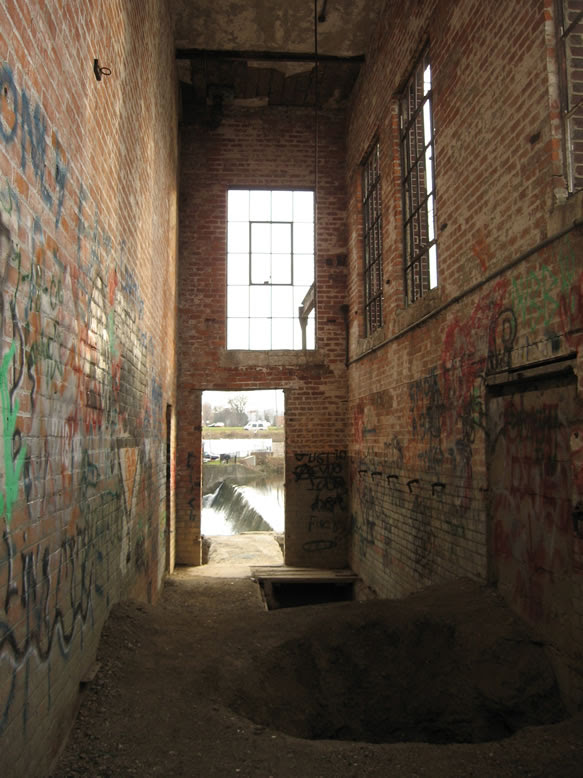 The city council of Ypsilanti became interested in using the abandoned powerhouse for power generation again in 1983, but after study it was found that in order to do this it would be necessary to demolish the old powerhouse and build a new one. Amazingly, this is what halted the plan--and it was Ypsi's mayor pro tem who voiced the objection, on grounds that the structure and the classic sign that it supported were historic and should be preserved--calling it "a good example of classical revival architecture and...a city landmark." 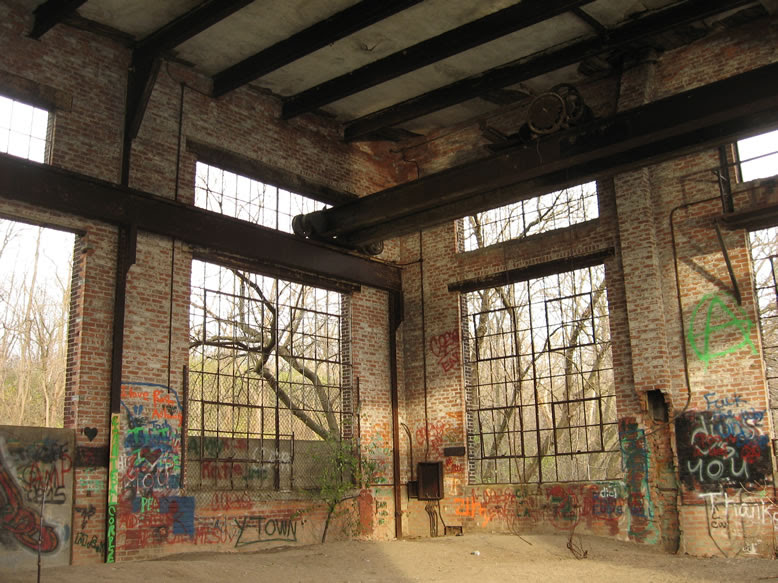 The city still acquired the surrounding land as a park and planned to turn the abandoned powerhouse into an interpretive museum, but as of 1989 funding never materialized, though the city claimed to still be interested in it, or in another attempt at turning it back into a power generating station. 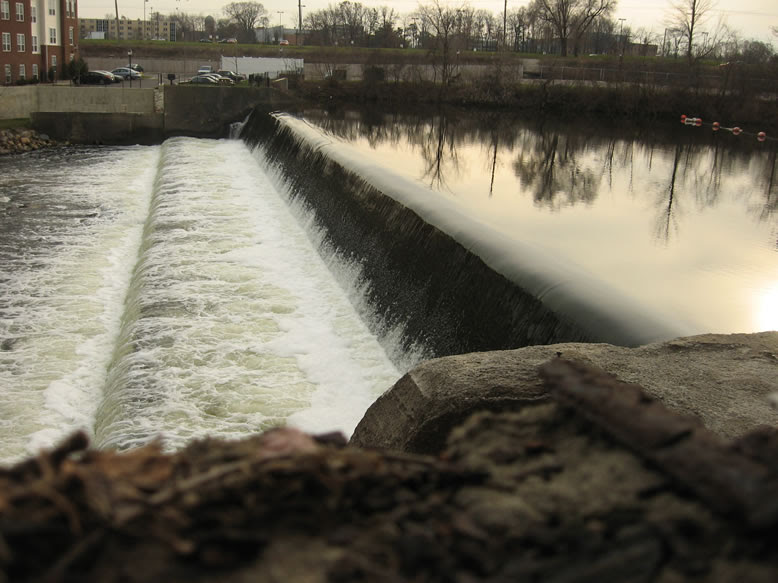 The abandoned Peninsular Paper mill buildings on the south side of the river were demolished in June of 2004, sadly just before I was able to get out there and sneak in. The smokestack was preserved however, and kept as part of the new apartment housing complex that was built on the old mill site. In this next shot you can see the old smokestack out the window: 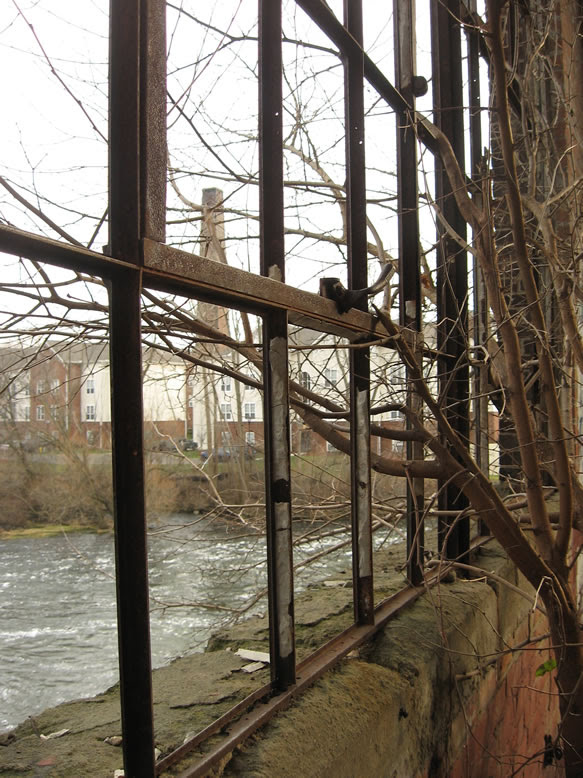 The new apartments are of course designed to look like the old mill that was torn down where they were built, but I don't think they had vinyl siding back then: 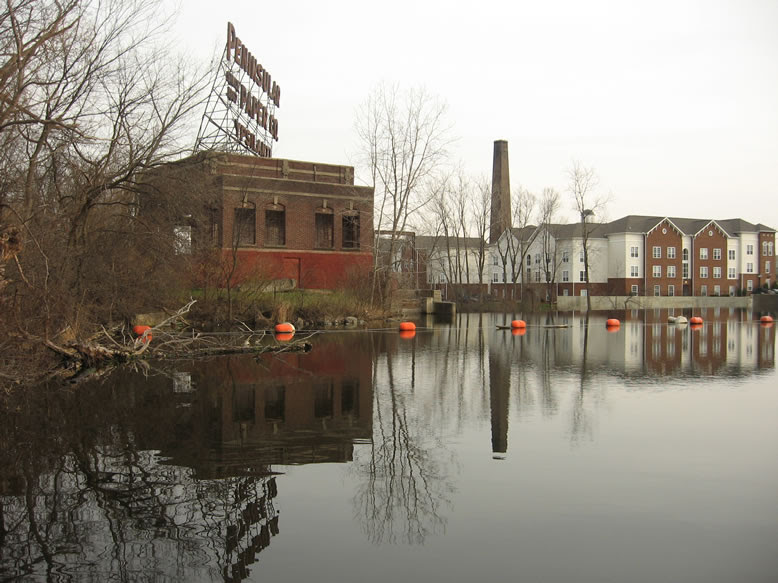 Rudisill reported in 2009 that the city was again interested in generating power at the station, incredibly while simultaneously preserving the historic structure. "Current thinking is that modern power generating equipment will fit in the basement of the power house thereby leaving the first floor open for other uses such as a museum, restaurant, bar or retail shop." I am not sure I have ever heard of a local government so admirably concerned about historic preservation in Michigan before...I'm sort of beside myself! 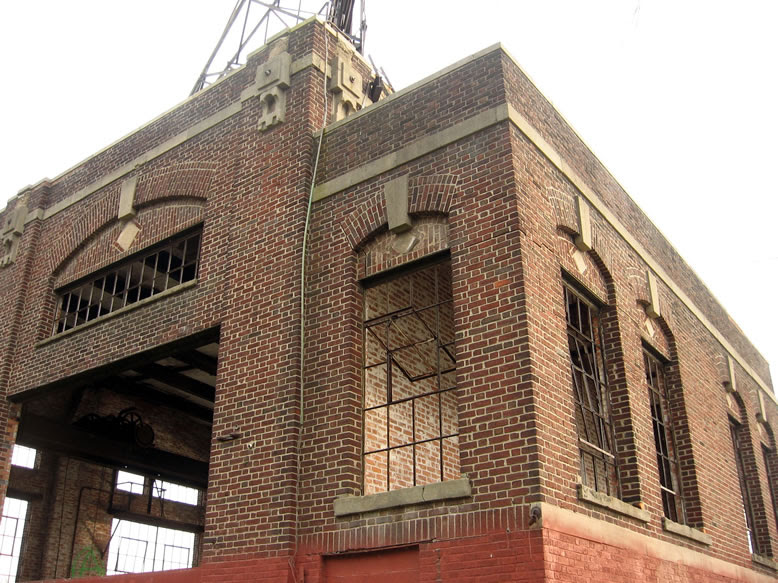 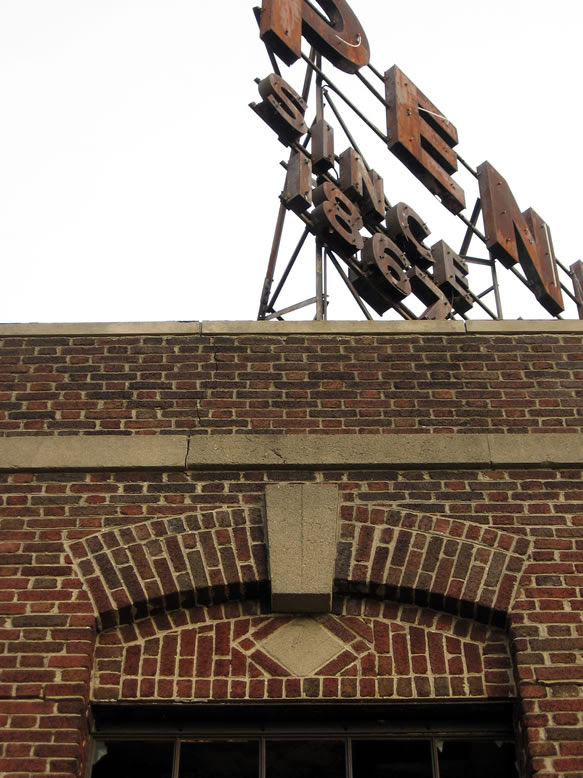 Luckily I screen-captured an aerial view of the mill before it was torn down. 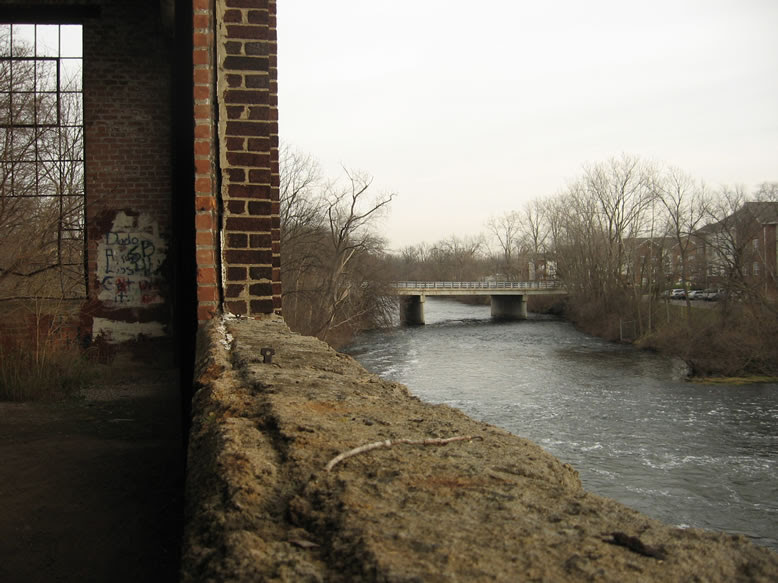 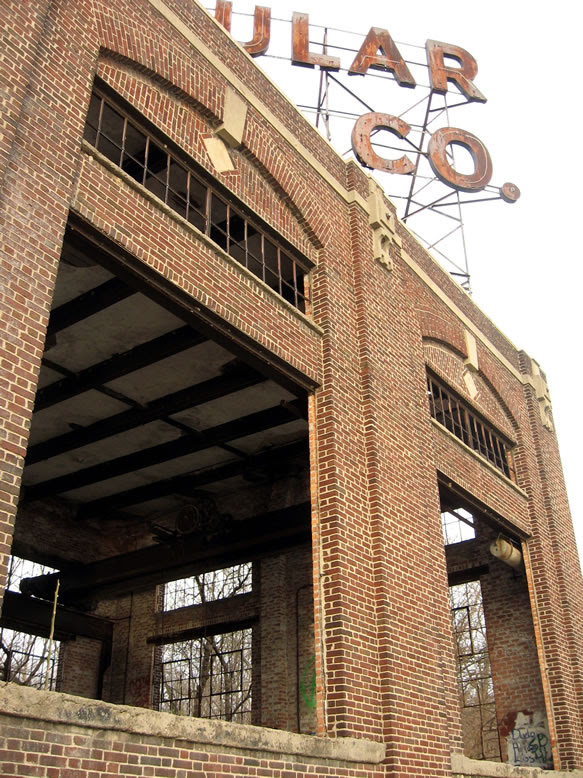 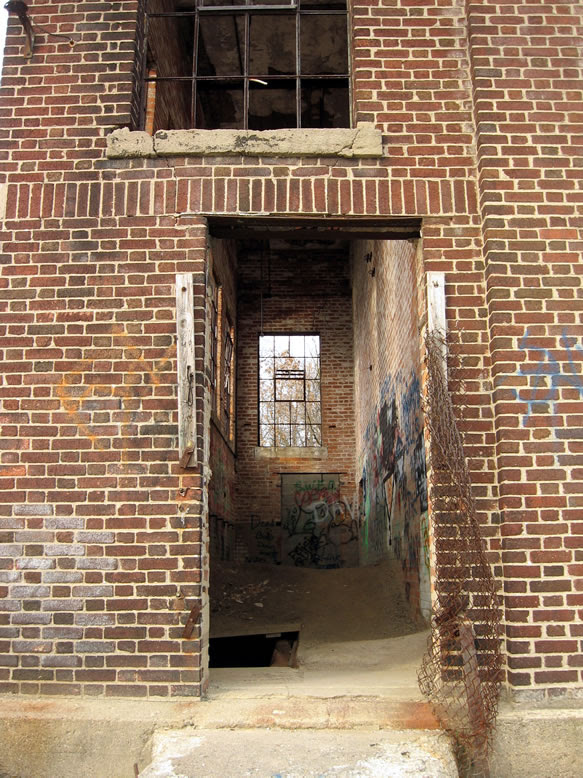 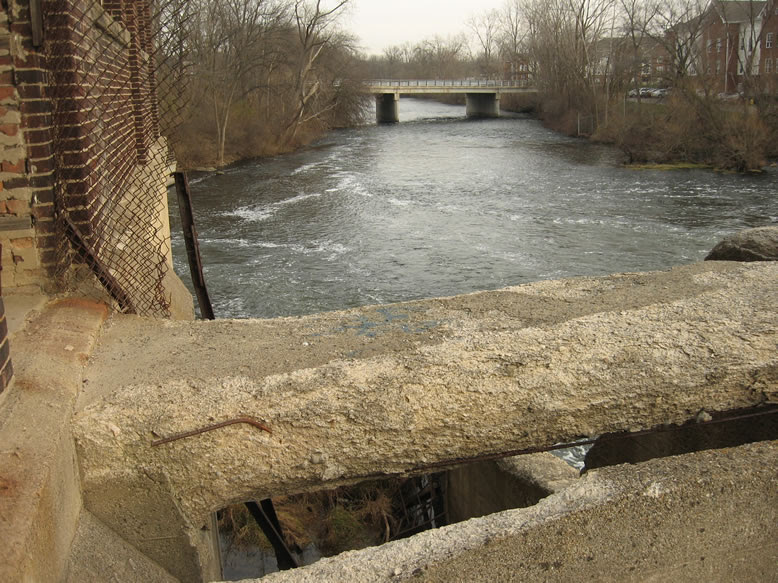 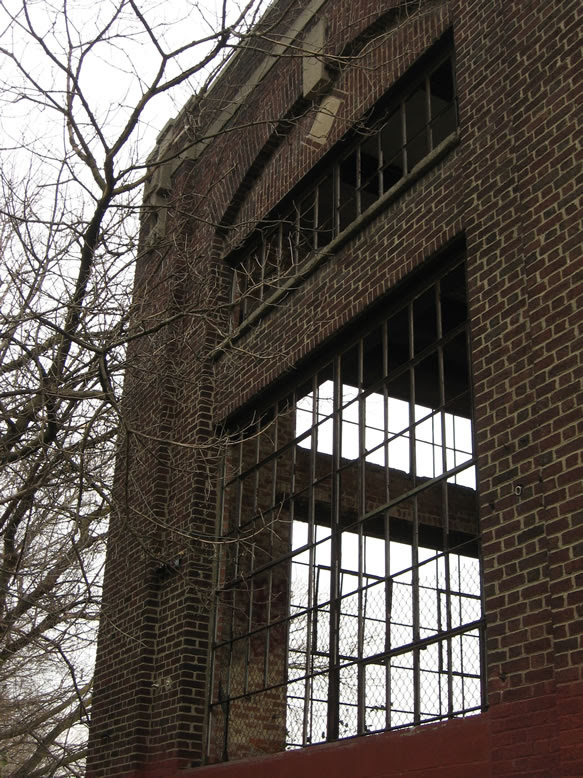