Sometimes it is possible to find a place that has sat open for a long time but isn't all tagged up or vandalized to hell. The plant of the General Printing Co. at 525 Harper Avenue was such a place, and perhaps because the great magnet of the infinitely more well-known Fisher Body Plant #21 loomed a block away, no one bothered to go look at this much more humble factory. 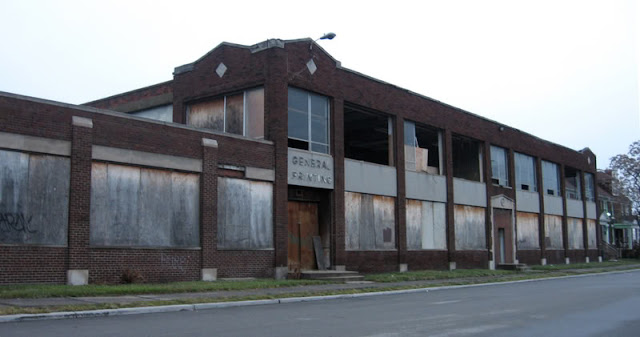 It's also difficult to look up any real information on the company because of the extremely...uhh, generalized name they chose for their business. They certainly didn't quite achieve the same level of fame as General Motors, so maybe they could have gone with something a little more...specific? 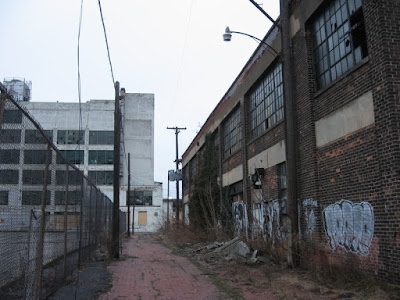 The only reference I could find online about this plant is a photo in the Historic American Engineering Record (HAER), which was taken "after 1968" sometime (by the looks of the TSR, COUP, ARMY, and GRAM throwies on the windows, I would say more like early- to mid-2000s is more like it). 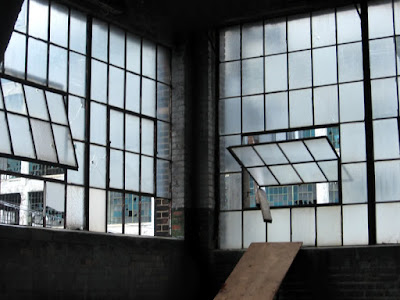 The Sanborn map from 1921 shows however that General Printing was not the first occupant of this building. Only the two-story portion of this plant was standing at that time, and it was apparently shared by Fisher Body Corp. and the Detroit Wax Paper Co. The name of the building given is the "W.A. Fisher Building." 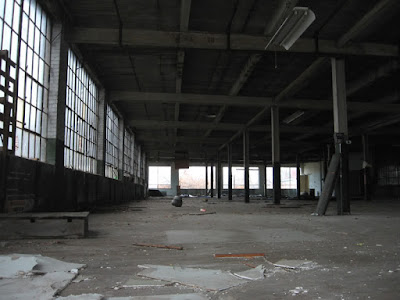 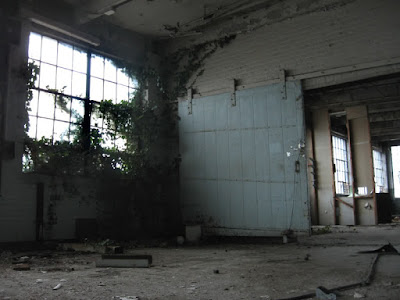 The entire second floor was used by Fisher Body for woodworking and drafting, according to the map. 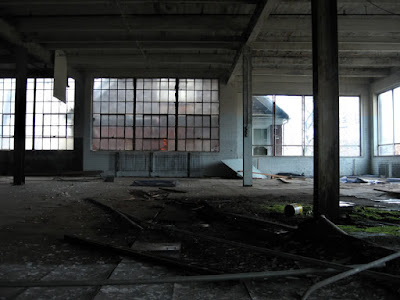 Here you can see the way in which cities used to be constructed, before the era of the modern suburban landscape...factories were built right in residential neighborhoods, wherever they could get a toe-hold, and eventually expanded until they engulfed as much of it as they legally could acquire. 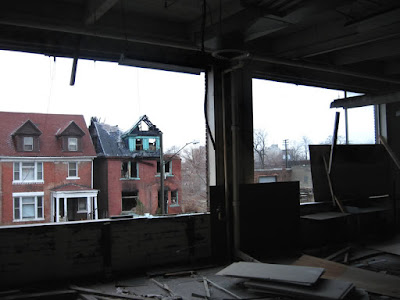 Over time, this space restriction is part of what drove industry and manufacturing concerns outside of the inner cities to the booming suburbs, where there was more room and cheaper land to build sprawling complexes. Meanwhile the inner cities continued to rot, since no one seems to have taken responsibility for all these blighted commercial properties that litter our once-beautiful urban areas. 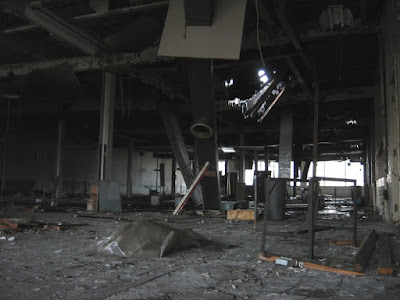 Here is Fisher Body Plant #21, viewed from the roof: 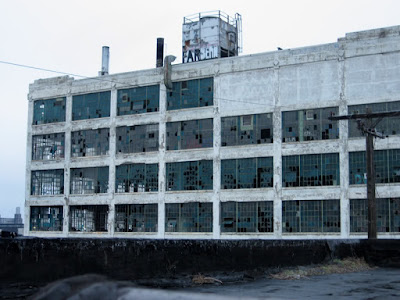 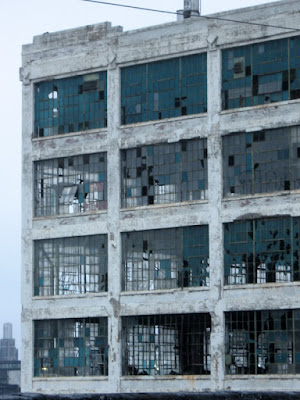 In the opposite direction, the old Ford Model-T Plant is seen: 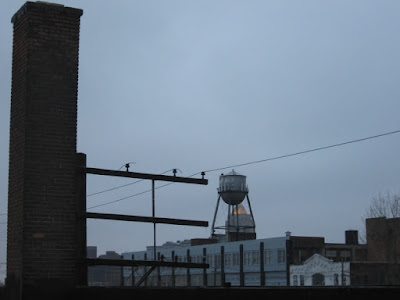 On Devil's Night of 2012, General Printing was mostly consumed in a blaze that raged for hours. 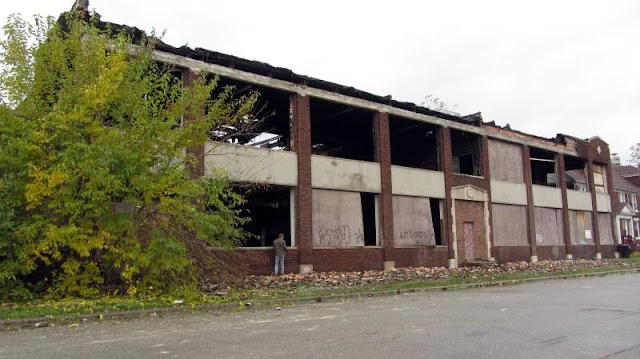 Here, Ladder 6 stands guard over the still smoldering ruins the next morning. 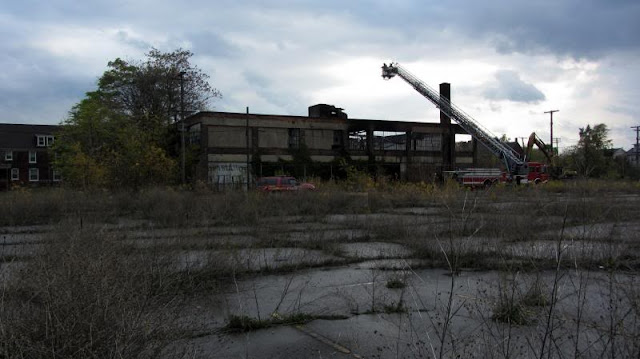 As I said in my post about the Luben Apartments, sometimes the fire department can request demolition equipment on site without the typical permitting, in order to reach hot spots buried within the structure, and extinguish them, or to remediate any ruins that may pose a risk of collapse. There doesn't have to be a conspiracy against historic architecture in play. 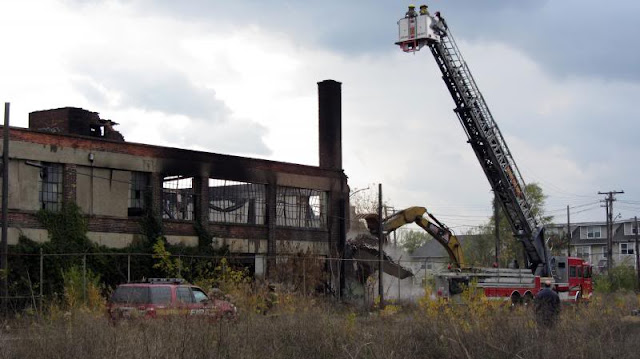 Here, some lingering news camera man waits for the smokestack to be toppled...because destruction is always good news footage. 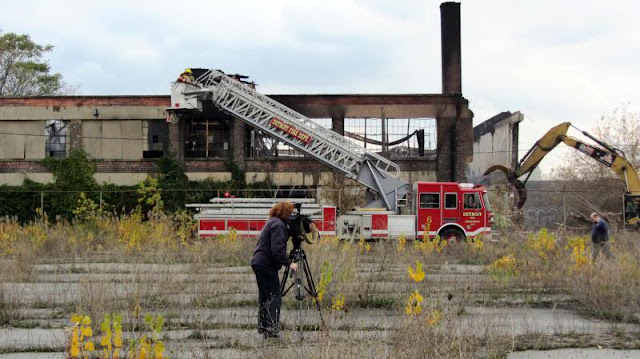 The chimney was destabilized and in danger of collapse, so it was pulled down. 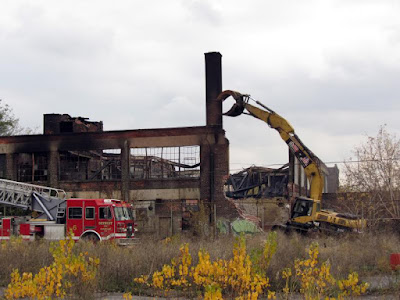 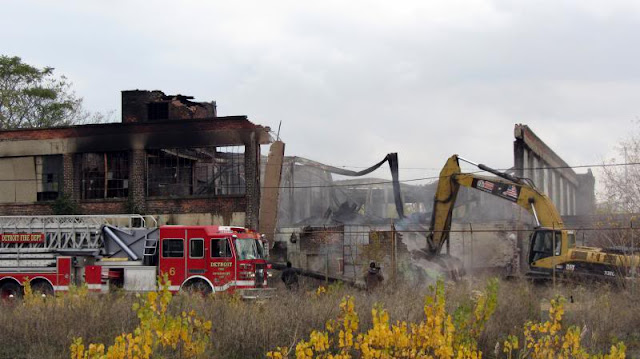 At time of writing, General Printing continues to stand, mostly in ruins. 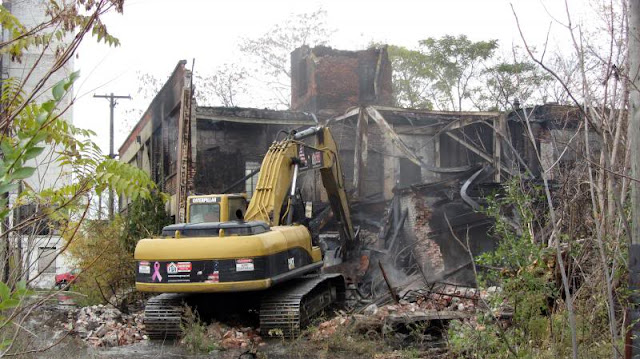