Photos from December, 2004 to April 2006; older ones scanned from film, newer ones are digital.

This long-demolished building used to be the front offices of the Ternstedt Mfg. Co. Plant #8, once a division of General Motors. One building of the plant along Livernois south of Fort Street still remains standing and in use, but most is in ruins. 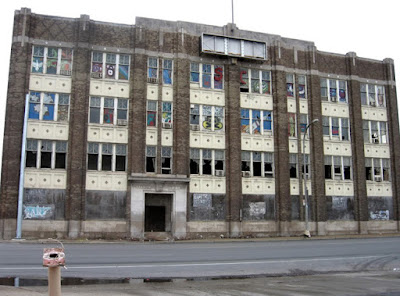 According to the article "Ternstedt Rejoins Fisher Body," in the November 4, 1968 Detroit Free Press,
Ternstedt was founded by Alvar K. Ternstedt, the Swedish inventor of the first practical car window regulator. In other words, the hand crank that rolls your window up and down—or should I say used to, before the advent of power windows? Well, my car still has manual crank windows.

Ternstedt applied for a patent in 1911 but it was not granted until 1916. Ternstedt needed financial backing to start his own company so he courted the aid of the Fisher brothers, who by that time already owned the largest car body firm in the world (they were not yet part of GM). The Ternstedt Manufacturing Co. was incorporated in 1917 with Alvar Ternstedt as chairman; the seven other directors were four of the Fisher brothers and three other major Fisher Body Co. shareholders.

This plant at 6307 W. Fort Street remained the Ternstedt headquarters until they were moved into GM's Warren Tech Center in 1962. In 1968 when the article was written, Ternstedt operated seven plants and had nearly 25,000 employees. There were 400 Ternstedt products on the average GM car in 1968, including door handles, window cranks, locks, wheel covers, and other chromed or plated parts. 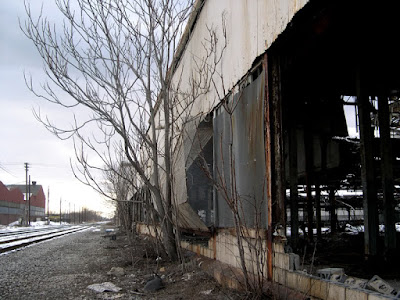 According to the GM Heritage Center, by 1937 this plant's production capabilities were stretched to capacity and a new Ternstedt plant was built in Trenton, New Jersey, and another in Columbus, Ohio in 1946. During WWII war production, Ternstedt manufactured anti-aircraft gun housings, gun synchronizers, gun sights, aircraft parts, gyroscopes, remote compasses, M-4 and Fisher tank parts, as well as other miscellaneous items, and received the Army-Navy "E" Award. The Army-Navy "E" Award was earned by only about 5% of the total number of plants that performed war work.

The fact that the plant was located only a few blocks from the Fort Wayne—which during WWII was the main Motor Supply Depot for the entire U.S. Army—meant that Ternstedt probably had a pretty simple logistics route in the 1940s. Every single motor vehicle and vehicular component Detroit produced for the war effort was shipped to the battlefields from Fort Wayne at the foot of Livernois Avenue. 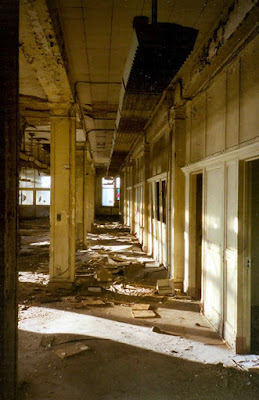 According to a former employee named Michael Westfall, in the 1970s the plant was "a beehive of activity of various operations including stamping, plating, die casting, buffing and polishing, heat-treating, welding and assembly of many different auto components." He recalled that on his first day he walked through the die casting area and said "you couldn’t see 50 feet ahead for the smoke and fumes from the machines." According to him, cancer was extremely prevalent amongst workers at this plant. 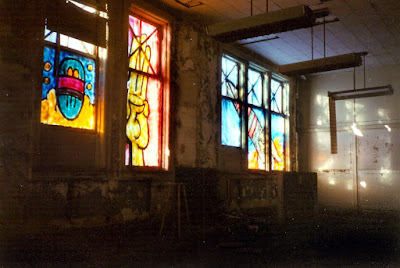 This building across the street has since been demolished: 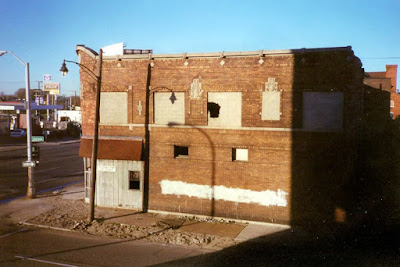 According to the book Women, Work, and Protest: A Century of U.S. Women's Labor History, by Ruth Milkman, women made up over half the workforce in the Ternstedt Plant (well before WWII), which at the time consisted of 12,000 to 16,000 workers. This was due to the assumption that women could more easily handle the small components such as doorhandles and chrome trim that Ternstedt produced. Ternstedt was also one of the only plants in Detroit that would hire married women. 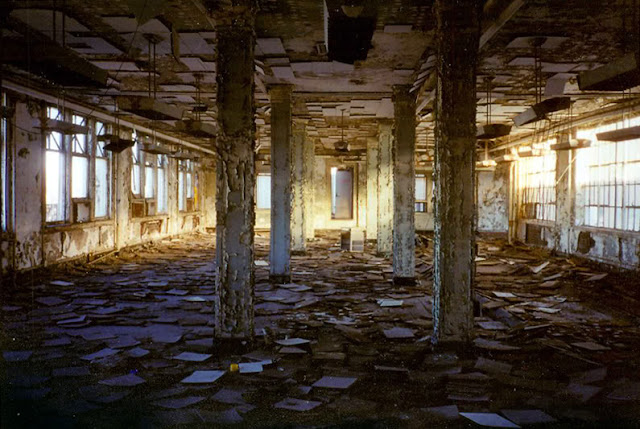 Usually the UAW paid little attention to the unique needs of female workers, nor were women typically allowed into leadership positions in the union. The Ternstedt Plant's chapter, Local 174, had an all-male executive board, for instance. But because Ternstedt was GM's largest parts supplier at the time, that made it a strategically important plant to the drives of the UAW, so their male counterparts led the women to organize this plant starting in 1935.

Remember that the big historic "Flint Sit Down" occurred in 1936-1937, and this was a time of rising labor unrest all across the nation. That was the year the UAW won their first major victories, and being that GM was their main target in the drive to form a nationwide autoworkers' union, the organizing of Ternstedt was a crucial piece of the puzzle. 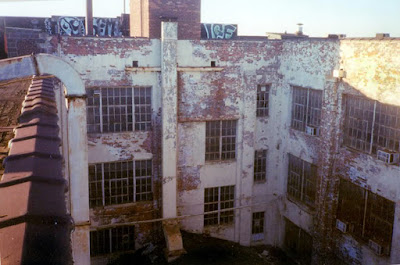 When the idea to organize Ternstedt was brought up, it was feared that such a move would be doomed, because the women there were mostly rural southerners who were anti-union, but in fact half were Polish immigrants, and many of those who were Southern had come from coal-mining ranges and had been wives and daughters of men in the United Mine Workers' union.

It was these women who ended up forming the backbone of the drive; their families had in fact migrated north when the unions failed to organize the coal industry in the 1920s. This is the same dynamic that affected many of the other areas of the Detroit labor movement—a significant number of families moving to the auto-industry after 1913-1914 were those who had been put out of mining jobs in the Upper Peninsula when the great Copper Country Strike had failed. 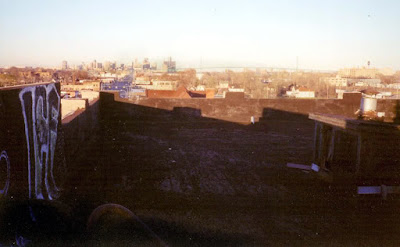 In order to effect their strike of Ternstedt in 1937, the workers did not attempt the usual sit-down work stoppage,  but rather they employed a "slow-down." This was a creative response to being bound by a no-strike clause written into the last agreement that the UAW had agreed to with GM earlier that year; legally they couldn't strike, but they could still hurt the company with a carefully-orchestrated production slowdown. This also caused minimal disruption to the familial responsibilities of the female workers at home.

Here is the machine shop that once stood on the west side of Livernois, and the power plant is beyond, as well as the Atlas Foundry: 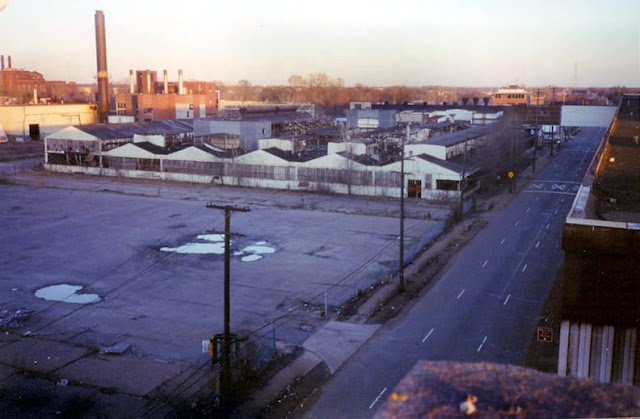 According to one article, the two different groups of women—the Polish and the Appalachians—were segregated into different departments of the plant. Supposedly, when the Southern women complained about not getting a raise or a bonus, the management told them that the Polish women had out-performed them in production, and likewise when the Polish women had complained of not getting something the management told them that the Southern women had out-produced them, usually adding-in racially charged slurs when referring to the other group to further engender divisions and mistrust between the two sides. UAW leader Stanley Nowak (who was also Polish) had experience in organizing women in Detroit's cigar factories, and began leafletting Ternstedt. The women eventually produced their own newsletter, the Ternstedt Flash, and soon the entire female workforce was galvanized to strike.

On February 11, 1937, GM finally buckled to the demands of the union and recognized the UAW, thanks to the Flint Sit-Down as well as the Ternstedt slow-down. 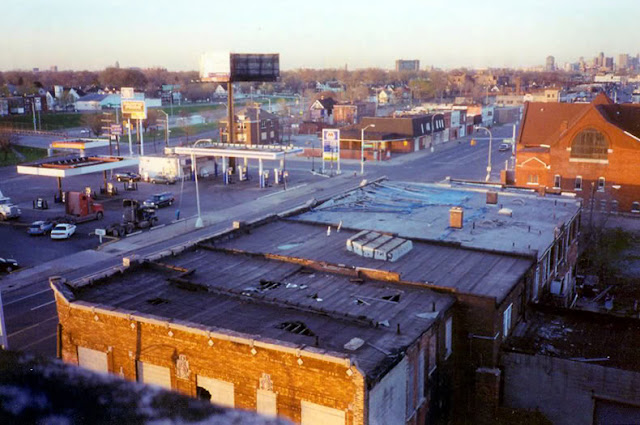 The whole row of buildings in the photo above has now been demolished (and the church will be demolished by 2018 so that the new bridge to Canada can be built).

This next shot is inside what looked to be the machine shop sat on the west side of Livernois. The sign says, "Assembly Rotary Android Machine"...there is an abandoned car also in the frame: 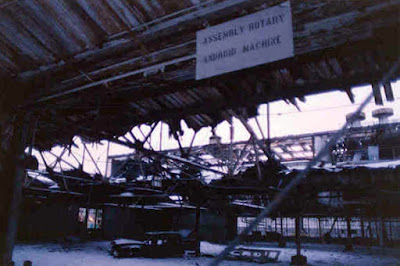 According to the GM Heritage Center, in 1921 Ternstedt acquired two independent manufacturing companies, the England Manufacturing Co. and the International Metal Stamping Co. England Mfg. made rolled shapes and stampings for Fisher Body, while International Metal Stamping built truck cabs, fenders, and large stampings. Ternstedt continued some of these activities, and turned out heavy stampings such as fenders, radiator shells and door panels but these were all discontinued in 1926. 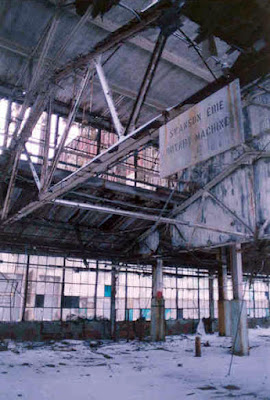 The roof slats were actually wood, but everything else was steel: 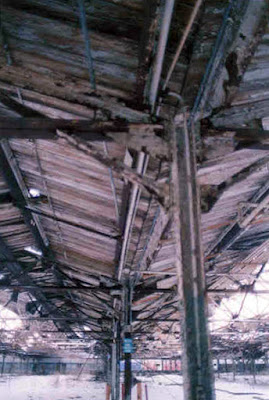 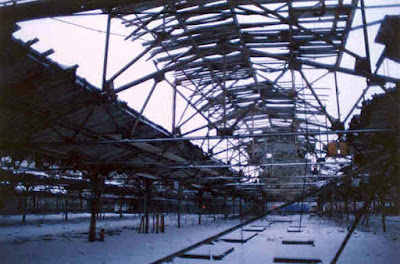 The square concrete pads on the ground would have once been mounts for machines. 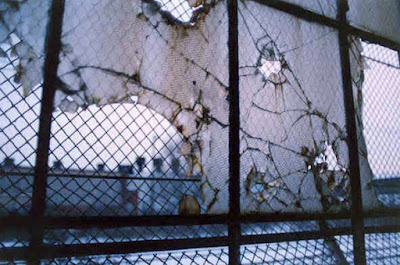 It really was kind of a vast place... 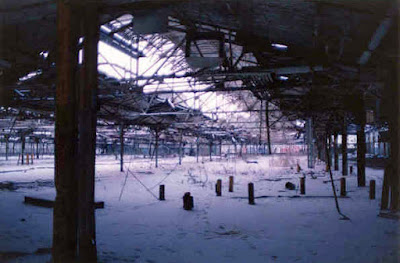 It was so damned cold out that day it was almost as if my film wasn't reacting properly, hence the slight blurriness: 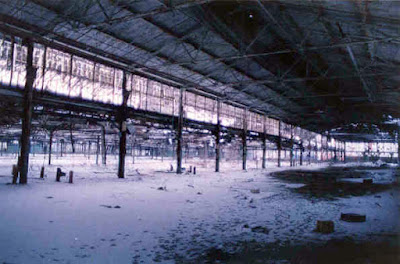 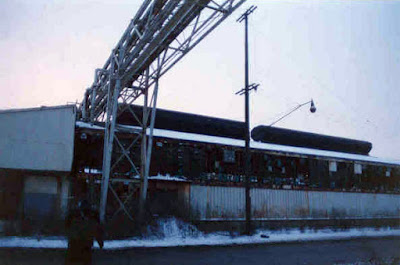 They originated at a power plant on Dragoon, which we also checked out. It was just too bitter f#$%ing cold, or I might have climbed the smokestack: 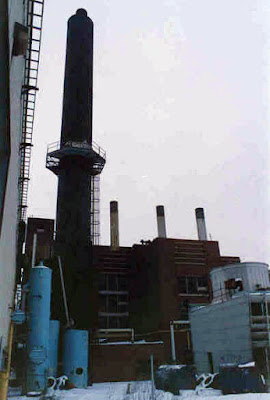 In a different post I wrote about climbing the large white watertower that stood on this property as well, when it was owned by the Sybill Oil Corp. 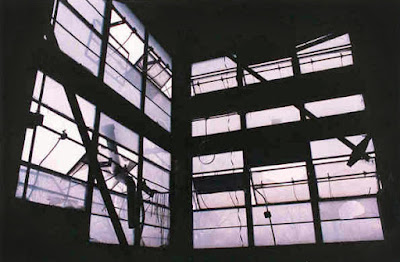 The interior was being worked on by scrappers even back then: 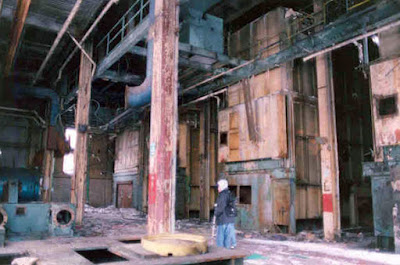 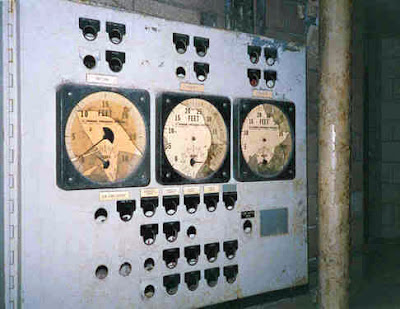 At time of writing, the power plant still stands as a shell, but these dynamos are long gone, as well as every single other piece of equipment that was in there: 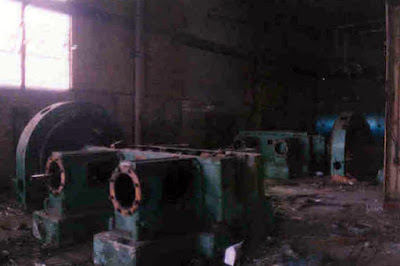 These sky-bridges that passed over Livernois have also been removed: 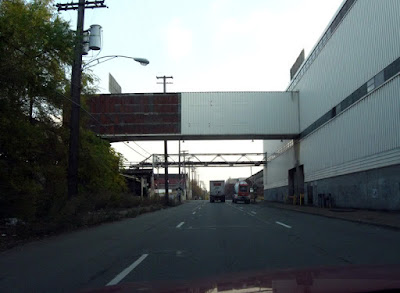 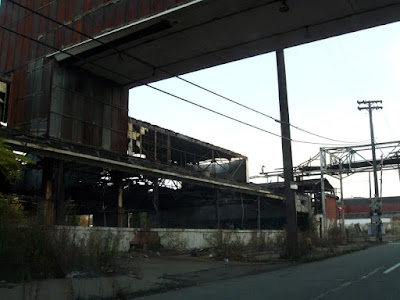 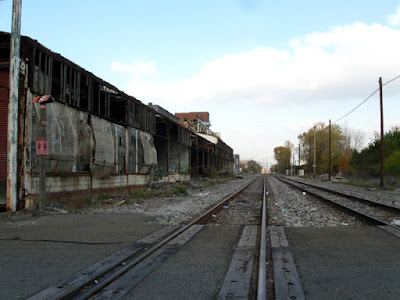 There was actually a documentary made that followed the ongoing broad-daylight theft of the entire Ternstedt machine shop building in about 2008-2010 at the hands of hardcore scrappers. 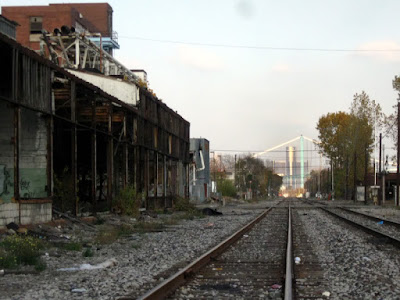 I loved all those cheesy documentaries that were suddenly being made in and around the city, c.2008...portraying the "gritty realities" of life in Detroit, or explaining how it is the "canary in the coal mine," or some other crap. Mostly because it's stuff that lifelong Michiganders have known for years...and we find it amusing when the media from out of town come in wide-eyed, and make the realization for the first time. Everytime I see these "Scrap-umentaries" as I am going to start calling them, I can't help but think of this song by local rapper Danny Brown, "Scrap or Die, Nigga," and chuckle a bit. 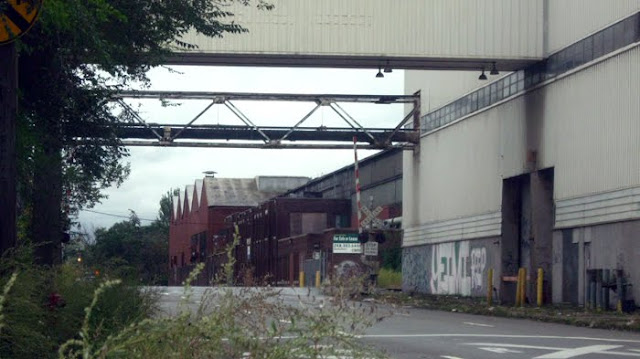 Anyway, there is nothing left of the machine shop but rubble now...the steam lines dangle over the street going to a building that no longer exists. 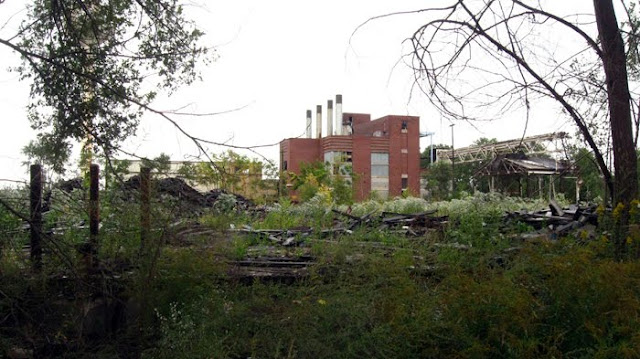