The next morning we awoke pretty late, stoked the “trusty” Swedish army stove and made some crude coffee in a pan before breaking camp. The plan was to head back south toward the ruins of the famous Cliff Mine after some breakfast in town. By the time we left the diner in Copper Harbor, the skies had clouded and rain threatened.

By the time we got to the Cliff, the threats had been fulfilled: 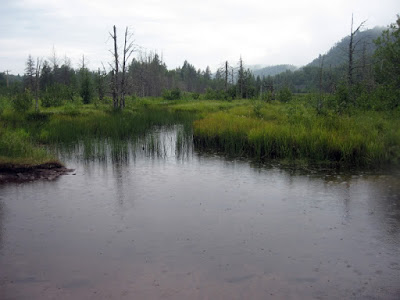 I showed you the Cliff Mine in a previous post, a very cool place to explore—and now, they have actually gone through the site and trimmed away much of the foliage that obscures the ruins. 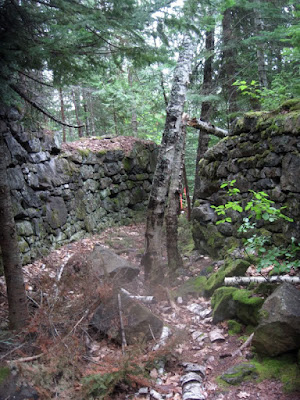 Photography is much easier back there now but I neglected to bring my camera, since I figured I had the place covered. Hank got some pics at least: 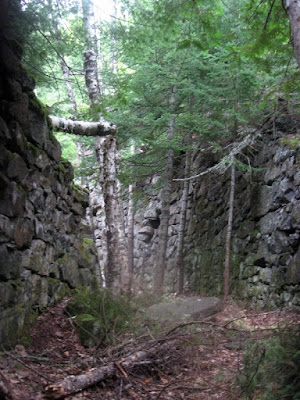 Investigating some sort of caved-in tunnel near a smokestack ruin: 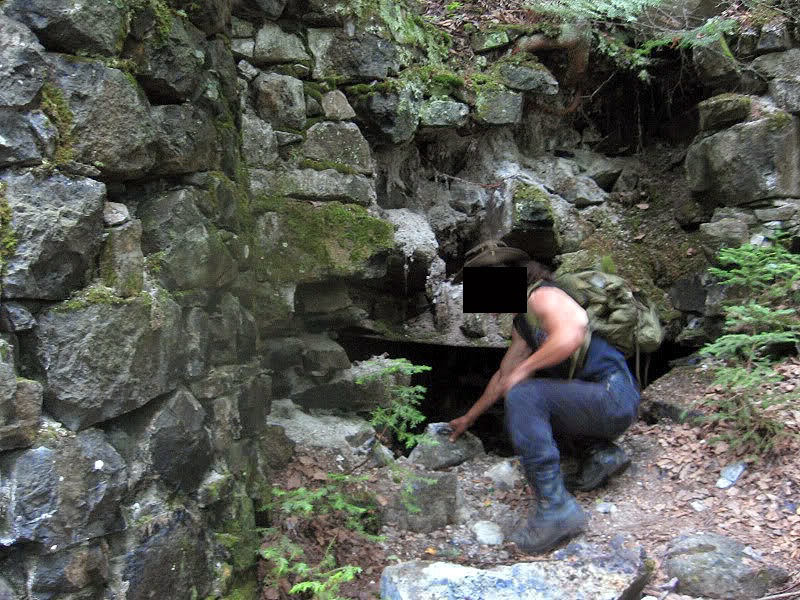 It started to rain as we climbed the bluffs, and we donned raingear. Once we completed the arduous climb to the top, it rained harder and the winds picked up. Tattered shreds of mist dragged low through the skies, raking the tops of the pine trees, and the ground became pungent with the musky smell of early autumn rain. 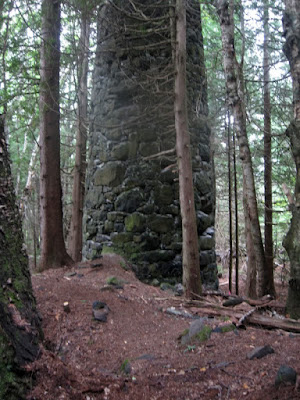 The climb and exploring made us tired and hungry for a hearty meal with beers, so we looked for a way back down that was not so steep. The jeep trail seemed like it might be worth following, so we did that. Eventually we ended up in amongst logging trails, and got dead-ended. We backtracked and when we thought we were about to come out on the back of the Cliff, we appeared on the front….

Oh well, at least we knew how to get back to the car now. We also began to find groves of thimbleberries. It had become a common sight since we were here in Keweenaw County to see people on the side of the road gathering these. The berries only grow here and in Maine as far as I know. 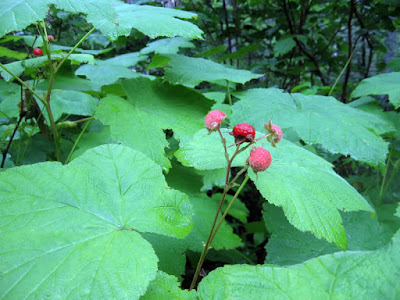 As we walked back to the bottom of the Cliff, we saw some more thimbleberries, and kept chowing on them. Before reaching the car we decided to check out the Cliff Cemetery before leaving. So we hiked back up the other side of the hill, and set out along the trail. It was still raining, and we walked for quite a ways. Hank did us the favor of getting us both stoned, and we ended up getting turned around in a swamp and got a little waterlogged. But thankfully there were handfuls and handfuls of those thimbleberries to eat, heheh. She wanted to save some in a bag to take back to Detroit, but we just couldn’t stop eating them. Pretty soon we forgot all about the cemetery we were looking for....

As we hit the road the sun came back out. I thought maybe on the way to get dinner in Calumet we should try to check out the Ojibwe Mine #1 and #2’s ruins, which were very nearby along an ORV trail. From the road we couldn't see any signs in the woods, even on foot, though we did come across a rather territorial, assholish rockhound at the pile. 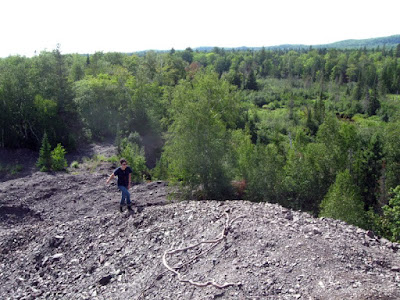 We found the tailings pile for the #1, and climbed it, but saw nothing else and had to turn back unhappy. I knew there was a rather complex set of ruins just back in the woods from the road, but for whatever reason we couldn't see them. We did at least get a nice view of the Cliff however: 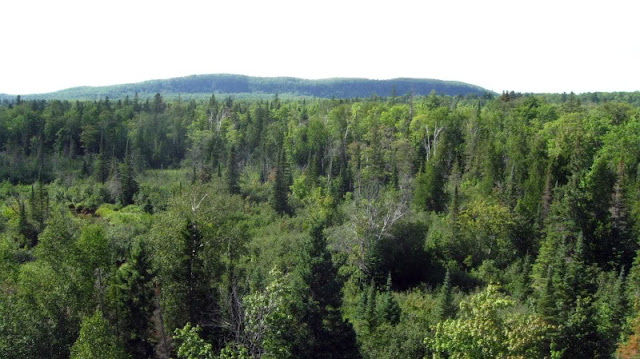 We putzed around Calumet for awhile, replenished the radiator jugs again, and then decided to find someplace to the south to sleep for the night, and maybe in the morning drive to the Porcupine Mountains or check out some more ruins in the south range before having to start the long drive back home. We didn’t find much on the way, and the sun was setting fast.

We kept forging ahead however, hoping to find somewhere to plop a tent, and even as we neared Hancock once again, we could come up with nothing. All this was private property in this area. Then, as the sun was hitting the horizon I had an idea...there were some ruins on the other side of the road from the Quincy Mine that were more secluded, and we could probably stealth camp. 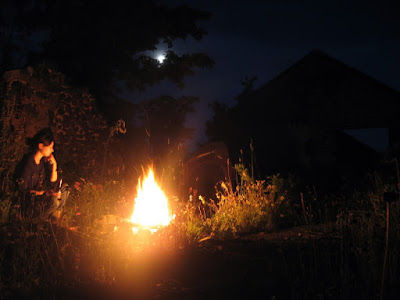 The moon was almost full and shone down over the twin cities of Hancock and Houghton from a clear twilit sky as we drank a few KBCs before crashing.