Hank and I began the long journey home from the Keweenaw. A few miles outside of Chassell, the temp gauge started to go up a little. I turned on the heater to cool the engine. Next thing I knew I was smelling something, the engine was stalling, and I looked in the rear-view and noticed we were leaving a trail of smoke behind us like we had been shot down by an enemy plane…. Of all the times for this to happen, it had to be when we were on our way home, a mere couple of hours away from being late for work the next day. This is where the story gets a little mundane, so read or skip accordingly, as Navi says.

The temp needle still pointed to “NORMAL”…I checked the oil and it was still full and clean…wtf? Just ahead of us was a bridge over the Sturgeon River Slough. I decided to grab the jugs again, fill them in the admittedly swampy creek up ahead, let the motor cool off, then fill the water up and limp it back the few miles to Chassell to see if we could get help.

The Thundercougarfalconbarf started back up, and drove with little complaint back to the gas station. The girl at the counter said there was a mechanic past the north edge of town. I limped the poor T-bird the next couple miles and saw it on the left. Mechanic said he could fix it, but he would have to wait until tomorrow to get the part, which had to be delivered from a store in Calumet, 20 miles to the north, which was closed for the day.

They told us we would have to stay at least one more night. It was Wednesday night. The owner said that they could probably have it done by dinnertime tomorrow, if the mechanic stayed late and came in early. The shop owner was nice enough to offer to drive us back into Chassell so we could buy beer and food, then back to the “Northern Aire Motel,” a rustic little roadside joint of yore. In the morning, the repair shop owner had some bad news. My car was a little more fucked up than previously thought, and would probably not be done for another day.

We tried looking into renting a car to get home. But there was only one car rental place (up in Dollar Bay), and they didn't allow one-way rentals. We even looked into taking an airplane out of Houghton County Airport, but the only way to get to Detroit from there is to layover in Chicago, and they only have two flights per day, which cost $500. There is no Amtrak, and the Greyhound already left for the day. Besides, the bus trip would take so long it would be pointless. We pretty much had to wait until the car was fixed.

The owner drove us back to Houghton where we could stay at the Super 8, and actually be able to walk around town and entertain ourselves, and said to call back tomorrow and check on the status. 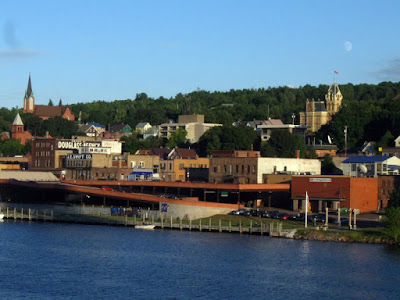 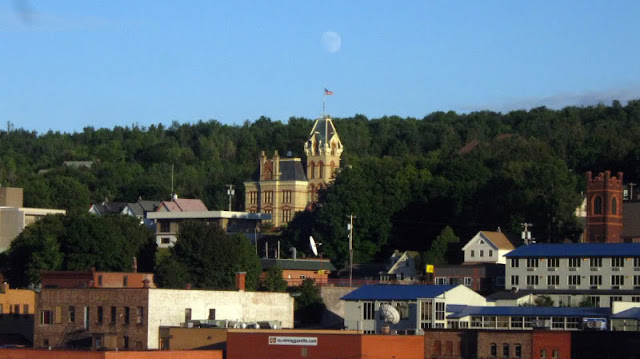 We did some laundry, drank some free coffee, used some free wifi, and chose a couple things to check out in town. We could go to the Keweenaw Brewing Company, makers of that fine KBC “gay miner beer” we had been drinking on the whole trip. Might as well drink more, I guess!

Also stopped and saw "The Dee"...which stands on the site of the first-ever professional hockey game in history: 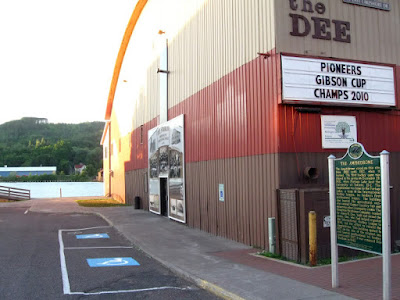 Also, I knew I could pull up the exact location of the Isle Royale Mine #1 and #2, which sat atop the hill just south of town. Not the most spectacular exploring sites if I remembered correctly, but it was all we could get to on foot. So that’s basically what we did…hung out at the KBC, got sloshed, then wandered out into the town and up the hill. While sitting on the deck behind the brewery however, we noticed a way onto the roof of the building…which might be worth exploiting after dark. We decided that since we had spent all week drinking their beer, we should also roof their brewery, haha.

At the site of the Isle Royale #1, all we could find was a gravel pit that had once been the tailings pile. Somehow I was not surprised by this. We sat there on some old concrete pipes and smoked. The weather was still effing immaculate. Wandered around some more, couldn’t find the #2, and moseyed back down the hill as the evening wore on. Wandered the small town on foot some more, listened to an Irish folk music duo playing in front of the old railroad depot, then decided to take a walk across the lift bridge to Hancock. 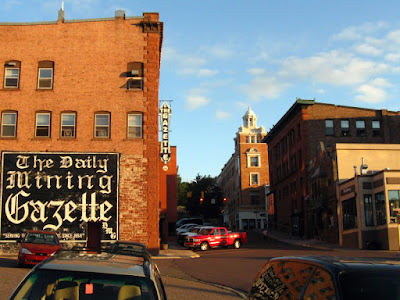 Just as I was commenting that in all the times I had been to Houghton I had never seen the lift bridge actually lift, we heard horns blaring and bells ringing… 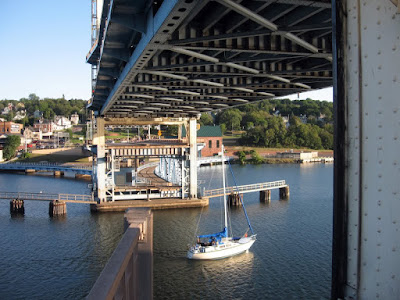 We quickly stepped off the midsection just in time to see it raise up and allow a dinky sailboat to pass under, haha.

Later we went back to the brewery to see about that way onto the roof for some shots. It turned out pretty well. 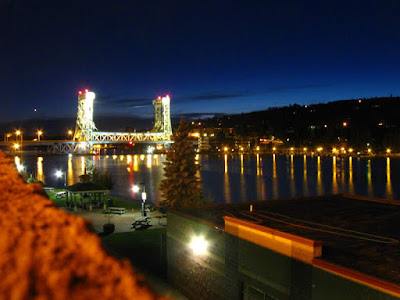 Houghton's streets are pretty dead in the summer when all the Tech students are gone. 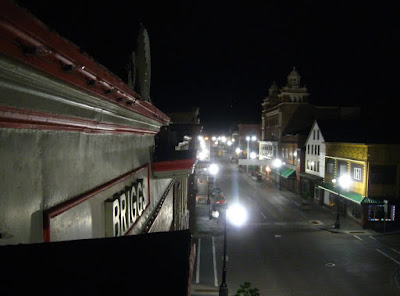 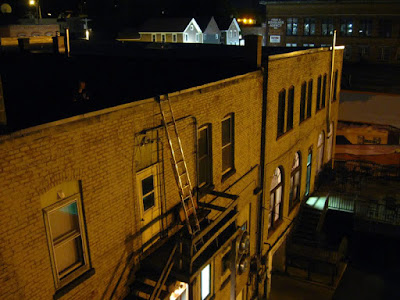 Never would’ve imagined we’d be doing Detroit-style fire escape shenanigans in the middle of the Yoopee. 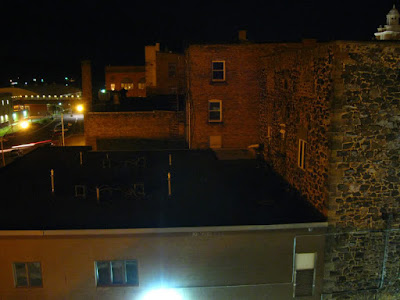 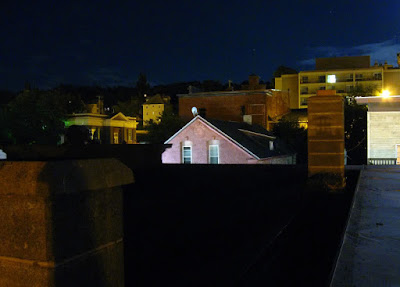 The next morning we woke up, checked out of the motel, and wandered the town at random some more, though it was looking like rain. We sat on the banks of the Portage canal and stared lazily at the water for quite some time. The temp was about 65F. I just hoped that the car would indeed be ready at around 1pm. We eventually made our way across the lift bridge again after lunch, and checked out the town of Hancock a bit. At 1pm, we called the mechanic from a gas station, and he said to check back around 6pm…we had no choice but to wait. 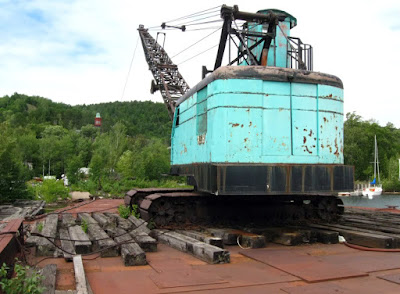 Hank wanted to check out the junkyard next to the old Quincy Smelter, so we hiked over that way along the ORV trail. I believe this site originally was occupied by the Portage Lake Foundry & Machine Co. 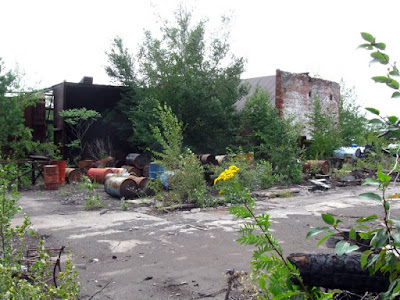 I believe these may have been their coal docks, originally. 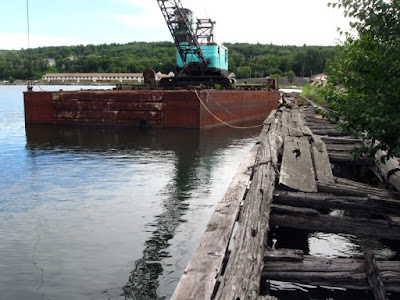 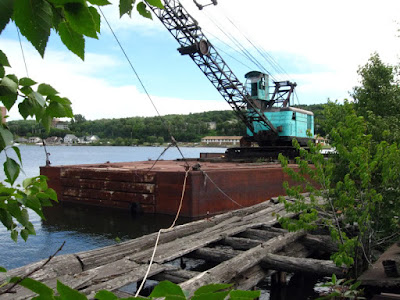 On board the barge, you can see the hulls of another two wrecked ships of some kind reclining against the banks of the Portage Canal in the background: 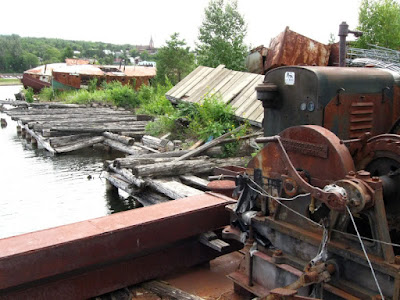 The repair shop owner picked us up at 5pm, and the car was coming along, but as time wore on, things started going downhill again…. There was no way to get another needed part from Calumet until the store reopened on Monday. He said there was a chance he could call around and get somebody to reopen the store for him, and he could drive to get the part, but by that time it would be physically impossible for us to make the 10-hour drive to Detroit and get there before 8am when I had to report to work. I knew that I could not get Saturday off, and I could not afford to be written up.

After much internal travail I decided to go ahead and take the '95 Chevy Lumina they had sitting for sale out front. We would leave the Thundercougarfalconbarf behind us in the wilds of the Yoopee, and sail blindly into the night in a junky $500 beater that had a million miles on it, hadn't been driven in a few years, was not plated, and whose rear suspension was completely rotted out causing it to constantly make a horrendous clanking sound from the back of the vehicle, and wander at high speed.

Having made this fateful decision, Hank and I hurriedly moved all our essential gear into the new whip, got the key (of course they couldn't find the title), swapped license plates, swapped in a fresh spare battery, and hit the road with exactly 11 hours to make a 10 hour drive.

Now plying the asphalt seas in our new pirate ship, we felt it was appropriate to bestow a name upon this dubious vessel. It was rocking snow tires, a Finlandia University parking permit in the back window, fender damage from where a turdy-point buck had once slammed head-first into it, was previously owned by a guy with a last name of “Koskela,” and we were munching on half a loaf of nisu bread we had bought a few days ago from the Soumi Bakery, since we were now totally out of money. 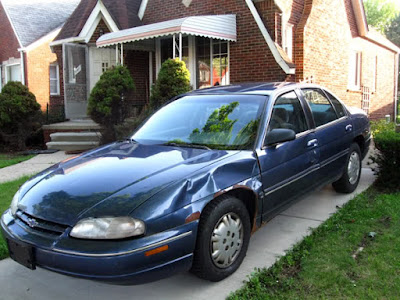 Therefore, I dubbed it “Da Finnish Torpedo.” The car had probably never left the Keweenaw Peninsula in its entire life. According to the internet,


Sisu is a Finnish term loosely translated into English as strength of will, determination, perseverance, and acting rationally in the face of adversity. However, the word is widely considered to lack a proper translation into any language. Sisu has been described as being integral to understanding Finnish culture. The literal meaning is equivalent in English to "having guts", and the word derives from sisus,which means something inner or interior. However sisu is defined by a long-term element in it; it is not momentary courage, but the ability to sustain an action against the odds. Deciding on a course of action and the sticking to that decision against repeated failures is sisu. It is similar to equanimity, except the forbearance of sisu has a grimmer quality of stress management than the latter.

I took the first leg of the journey, driving as fast as I dared in this dodgy machine, praying that no cops would see us, and aimed for the Mackinaw Bridge. Just as twighlight was fading in the forest, we were cruising at 70mph through the Michigamme area and off on the side of the road near the treeline I saw a towering beast that could only be…“MOOSE!!”

I pointed wildly out the window, exclaiming that one word and Hank slowly caught on to what I was trying to say. The fucker had a rack about eight feet across and stood as tall as a tree. It was like seeing a dinosaur…there was already one or two other cars stopped on the side of the road gawking. Had I not been going so fast, and had we not been so pressed for time, I would’ve turned around to get some pictures.

We traded off at the Bridge, and Hank took the helm for the last leg of the journey. We arrived in Wayne County at about 6am, completely spent.