The book Cinema Treasures: A New Look at Classic Movie Theaters, by Ross Melnick and Andreas Fuchs shows a photo on page 146 that shows the original Beax-Arts facade when this building was still called the Duplex Theater, and it is a far-cry from what the place looked like when I visited. As you can see the exterior has been downgraded so severely that it barely warranted more than an out-the-car-window-while-driving photo. The interior offered little more. I wonder though, if you had peeled back that dour corrugated steel cladding whether you might not find the remnants of an exuberant terra cotta Beaux-Arts facade behind it? 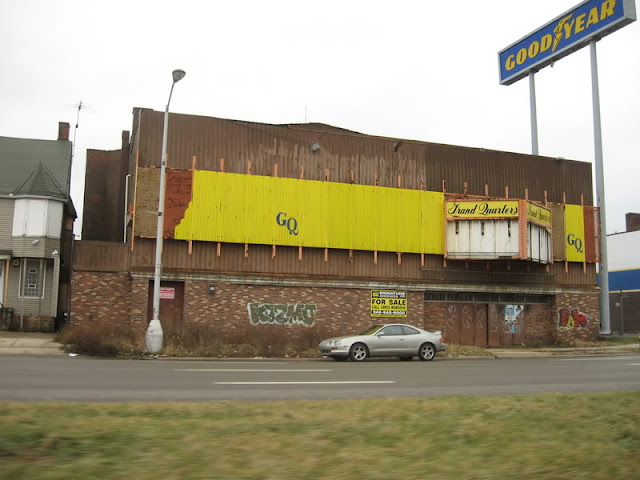 When I entered, I immediately was challenged by two shadowy individuals who were in there, doing...something, and I returned their authoritatively-trained flashlight beams with one of my own, and responded to their demands of what I was up to with a similarly pointed inquiry as to their own activities. They seemed to be some sort of building inspectors, or officials of some kind, but presented no credentials, so I set about my business and they promptly left. One must be confident in oneself in this line of business, and not easily intimidated.

As you can see however, even though my flashlight was bright enough to sufficiently blind a couple sketchy characters, it was not powerful enough to produce decently light-painted photos. Sorry about that...hopefully I can make up for it with some interesting research. 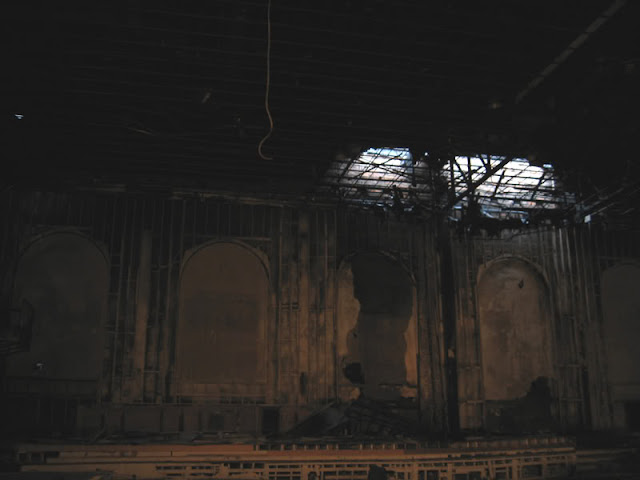 Melnick and Fuchs go on to say that this building opened in 1915 and (as its original name implies) was the first duplex movie theater in the nation; that is, the first with two separate auditoriums. Each had a capacity of 750 seats and was separated by soundproof walls. It also pioneered the use of staggered admission times for each theater, where the doors would be closed at the start of the feature, and no further admissions were allowed.

According to The Moving Picture World in 1916, "the Duplex method of exhibiting moving pictures is set forth as the invention of Fuller Claflin," who was not only the architect and builder of this theater, but also of over 75 other theaters in the U.S. and Canada. Claflin was based in the Elks Temple in Detroit and was seeking the patent to his duplex invention. The Duplex Theater was operated by the Grand Boulevard Theater Co., headquartered at 602 Farwell Building, and changed its features three times per week. According to this article, the theater's pipe organ was housed in the dividing wall between the two auditoriums, and its sound could be shifted to either side "at the will of the organist." 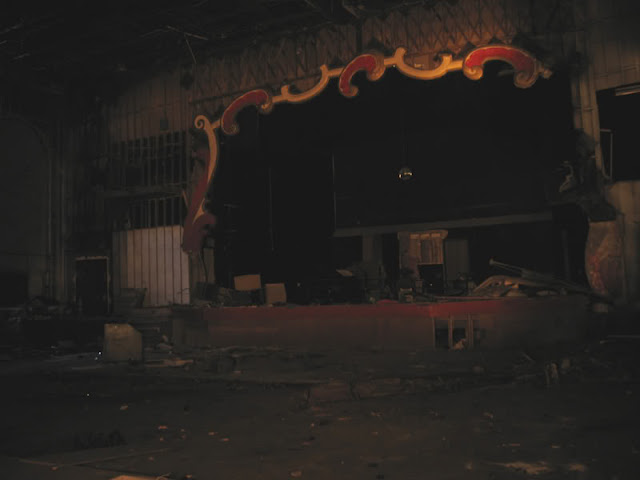 As you can see there have been some major changes not only to the exterior of this building, but also the interior; it is no longer a duplex or a theater.  According to the book Detroit's New Center, by Randall Fogelman, it was converted by the famous Detroit theater architect C. Howard Crane in 1922, and renamed the Oriole Terrace Ballroom. In 1944 it was again renamed the Latin Quarter, and held concerts, banquets, dancing, and similar events. In 1956 it was the site of the first NAACP Freedom Dinner Fundraiser, which Fogelman notes is now one of the largest sit-down fundraising dinners in the country. 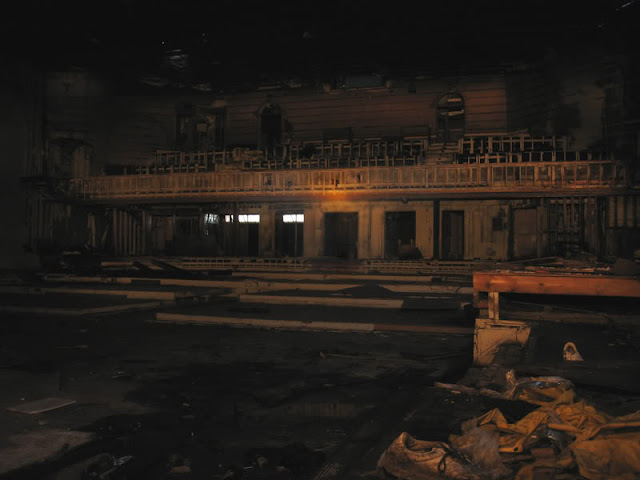 An entry on Detroitfunk.com states that it later served as a music venue that hosted Motown acts. This makes sense, being that the Motown offices were nearby. It may be worth noting at this point that the theater was obviously built in a location to serve a specific hub of the city—namely New Center, which is sort of like Detroit's "other" downtown, and has its own commercial scene.

Through the 1980s it was a viable theater, Detroitfunk notes, during which time it became known as the Grand Quarters, but if I'm not mistaken it was named the 100 Grand Club for a short time prior to that. It closed in the late 1990s. A quick surf of the internet turns up the names of many acts that allegedly have played at the Grand Quarters: Stevie Wonder, Marvin Gaye, The Supremes, Duke Ellington, Ella Fitzgerald, Sonic Youth, Sophie Tucker, Lena Horne, Jimmy Durante, Sammy Davis Jr, Arlene Dahl, Red Hot Chili Peppers, Butthole Surfers, and the Almighty Lumberjacks of Death.

It was demolished by January of 2012. Some more interior pics here.