The Scene of the Crime 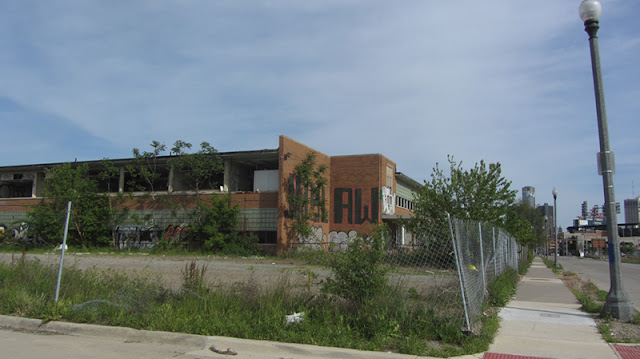 Built in 1957 at the northeast corner of Brush Street & Winder to serve residents of the Brewster-Douglass Housing Projects, it was named after the guy who wrote the classic American song "Camptown Races." Ah, the American age of (so-called) innocence. 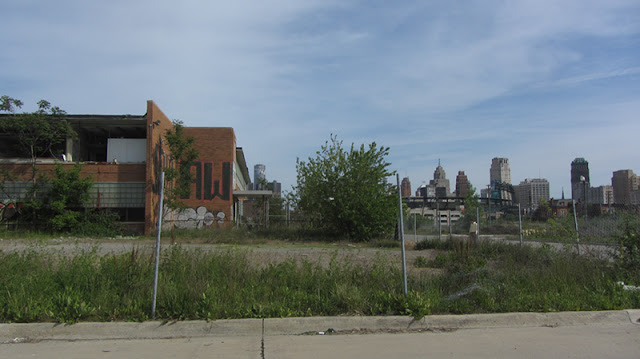 The fact that it was once the home of the Detroit Police bomb squad, and crime lab escaped most people's notice until after they peeked inside, at least. The school was retrofitted to house these police units in the late 1980s when the crack cocaine epidemic steamrolled this part of the city into a war zone. It was properly called the "Detroit Police Department Forensic Services Laboratory," or DPFSL.

I was actually pretty late in exploring this one, well after all the cool stuff was looted or removed by police. 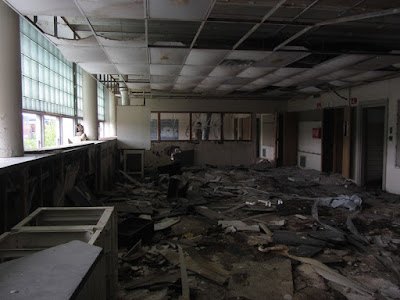 This facility is referred to in two books by criminal justice author Brent E. Turvey, entitled Miscarriages of Justice, and Forensic Fraud. 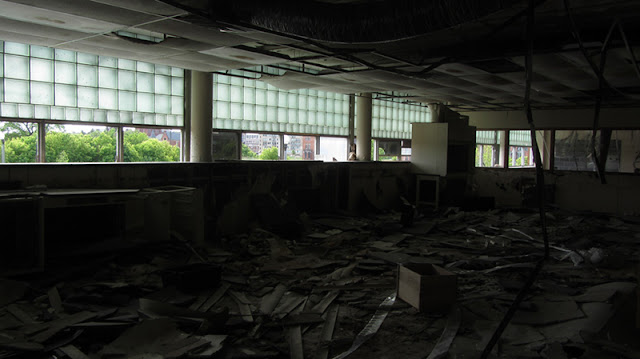 Turvey writes that the DPFSL was closed due to malpractice stemming from events that began unfolding after a shooting case in 2007 where it was erroneously claimed that all 42 bullet casings found in a double murder originated from a single weapon. The discovery of the error prompted a Michigan State Police audit of the DPFSL, which determined that 10% of all DPD firearms investigations contained "serious errors," as well as grievous noncompliance with laboratory standards for evidence handling. 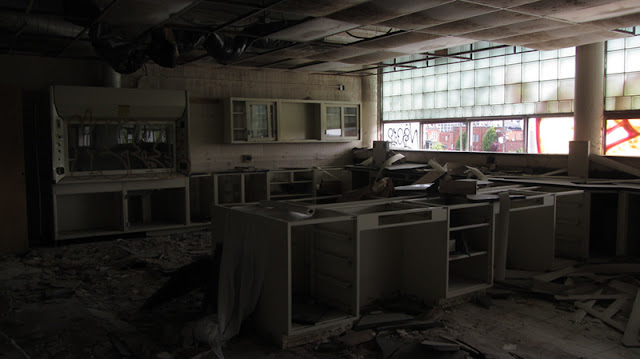 The numerous errors "made by multiple examiners" within the lab, Turvey wrote, was "indicative of a systemic problem," and it was directly because of this that the lab was ordered closed in October 2008. Worse yet, as if to rub salt into Detroit's wounds, the building was also ordered to be condemned because of its poor condition. Keep in mind that Mayor Kwame Kilpatrick had just resigned in disgrace once month prior to all this, due to his own scandals.

A good part of the building had already collapsed by the time of my visit: 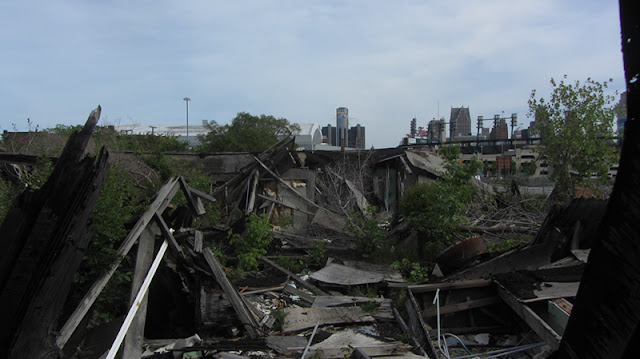 Faced with the sudden absence of a functioning crime lab, the City of Detroit asked the Michigan State Police Forensic Science Division to temporarily take over the responsibility for the city, representing a 150% increase in the state police caseload, according to a .pdf document at michigan.gov. Before the DPFSL was closed in 2008 it took in approximately 20,000 cases annually, and offered forensic services in ballistics, biology (DNA), latent prints, drug analysis, toxicology, and alcohol analysis. 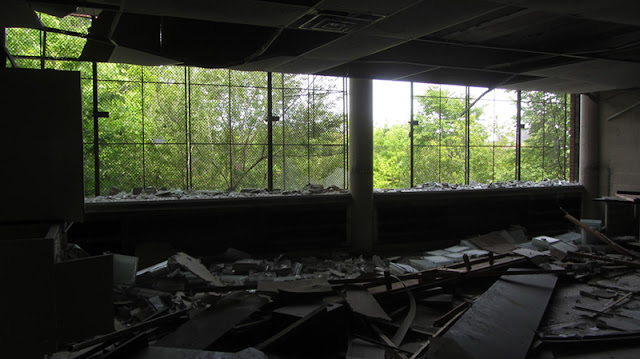 By 2009 it was determined by investigators that at least 147 Detroit cases had to be retested as a result of errors by the DPFSL, and defense attorneys identified another 30 where evidence had been mishandled in some way. 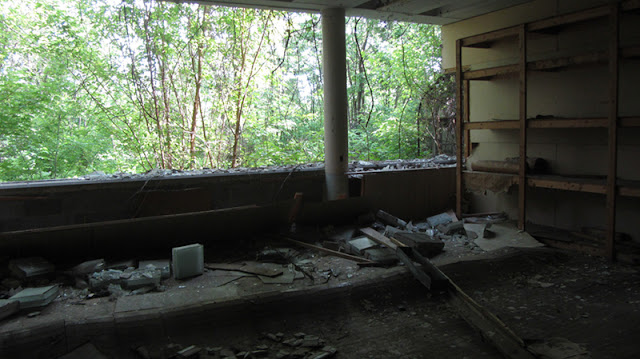 "These and other scandals" within the DPD, Turvey wrote, combined to suggest "a department out of control, with ethically bankrupt leadership creating a culture that is marked by entitlement, permissiveness, and in extreme cases, criminality." Clearly, in light of these grave issues the lab's closure had been justified, but it also effectively ended any internal investigation of the concerns over misconduct and wrongdoing, leaving a lot of questions unanswered.......on purpose? 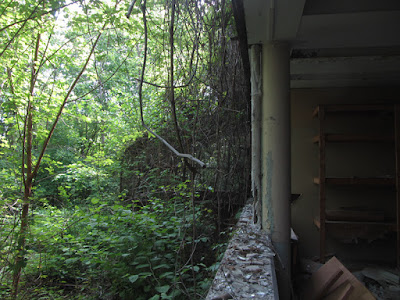 Despite claims by DPD that evidence left behind in this building was properly secured, local journalists (as well as friends of mine) found otherwise: thousands of rounds of live ammunition, sealed evidence kits and case files containing victims' personal information, hazardous blood samples, etc., were still strewn around the lab two years after it had closed. This was also a precursor to when the infamous 11,000 untested rape kits were found and made the news shortly afterward, although they were not stored here, but in Fisher Body Plant #10. As a matter of fact it was exactly 10 years ago that the discovery of the kits was made, and it is back in the news again because the testing backlog has finally been cleared—thanks to funding from private donors. 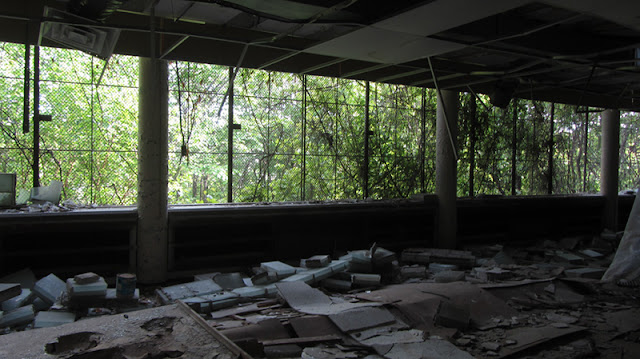 The completely impenetrable foliage around the building reminded me of exploring the infamous Byberry State Hospital in Philadelphia... 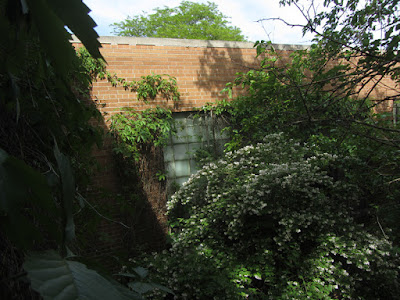 I could've sworn I read somewhere recently that the Detroit Police played a role in the birth of modern fingerprint collection and cataloguing in the early 20th century, but now I can't find where the reference might have been. Oh well, the Detroit Police Crime Laboratory was definitely one of the oldest municipal crime labs in the nation, dating back to 1927. Naturally Detroit had kept a lab of its own separate from the state system because of its great population and size of its caseload.

The present system of fingerprinting used worldwide was developed in the late 1900s by Sir E.R. Henry of Scotland Yard. 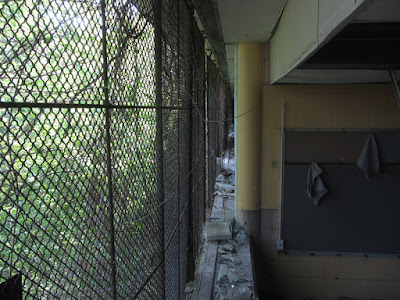 A Detroit Free Press article from June 1920 entitled "Finger Prints Urged for All," seems to indicate that not only were the DPD using fingerprinting to solve crimes by that time, but they definitely were part of the push to create state and federal fingerprint registries for the purpose of universal fingerprinting identification.

At the International Police Chiefs' convention in Detroit that month, Eugene VanBuskirk, the superintendent of the National Bureau of Criminal Identification made a motion that Congress be petitioned to do just that, referring to an increase in crime during the economic Depression of 1920 (a depression that was especially stark in Detroit). A police chief from Buffalo was quoted as saying, "The growing national character of police work and the activities of the [IWW labor union] and similar organizations are only additional factors that make it necessary for police departments to work in closer relation with one another than ever before." 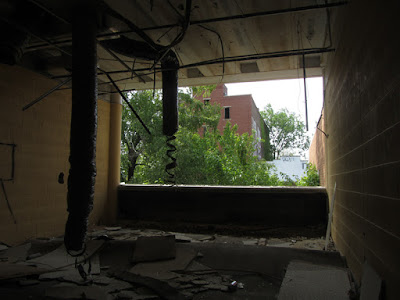 VanBuskirk added, "The general unrest probably will continue for some time," he said, before going on to blame the trouble on citizens who had become migrant workers due to economic conditions during World War I, claiming that they were people of "vicious tendencies," and in the commission of crime were impossible to trace due to their "non-identity." Newsmen stoking the fires of the Red Scare, or the beginning of militarized policing? Either way, it sounds awfully familiar today. 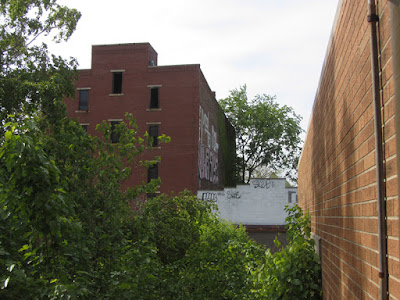 It wasn't until January 1926 that I found another Free Press article about fingerprinting in Detroit. Entitled, "Fingerprinting Wealthy Detroiters," it featured several photos from the rush of 3,000 members of Detroit's wealthiest upper crust and their rug rats, who lately had signed up to be fingerprinted. Of course back then it wasn't all about busting criminals, fingerprinting was also being used to prevent infant mix-ups at hospitals (an infamous case of mistaken baby switching had recently happened at a Detroit hospital in 1925), and prints also served as a bank signature to prevent forgeries as well. 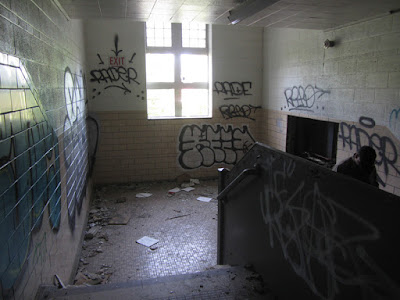 A year later in June 1927, the International Police Chiefs' convention was back here again, on the other side of the Detroit River in Windsor, Ontario, and they were still urging for the adoption of universal fingerprinting. The headline "Police Heads Join Rush for Windsor Rum," reminds us that this was still in the heat of the Prohibition (rum-running) era here, revealing the motivation for the push to beef up fingerprinting technology. Despite Chicago's gangster-era limelight, almost all of Capone's booze came across the Detroit River, so despite its comparative quiet Detroit was even more flush with criminals to catch in those days, and police were losing the war.

The next headline, from that autumn, "Police Call on Science in Detroit Crime War," details the birth of what came to be known as the Detroit Police Crime Laboratory, replete with a full-page photo spread:

The Detroit Police introduced a chemical research bureau and a ballistics bureau in October of 1927 under the supervision of Capt. Charles E. Carmody, chief of the identification bureau. The combining of these two new divisions with the identification bureau (fingerprinting) under one banner marked the official beginning of the Detroit Police Crime Lab, which was then located on the fourth floor of the Police Headquarters on Clinton Street. The article goes on to say that Detroit's had in fact served as the central fingerprint bureau for all of Michigan at that time, since the state police had apparently not formed their own yet. It was described as one of the most complete in the country in 1927, and by far the most complete in the state, continually exchanging prints with the federal bureau in Washington, other U.S. cities, Scotland Yard, and the Paris Prefecture of Police. 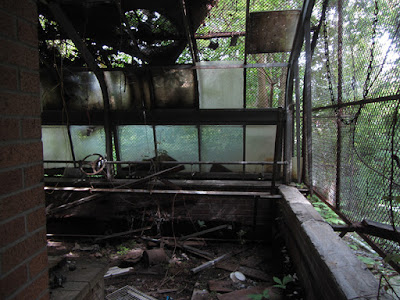 Ironically, although the entire exterior of the building was under attack, the greenhouse was totally devoid of plant life: 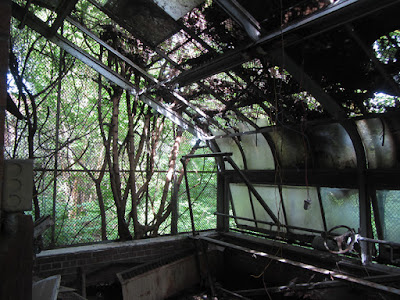 I wonder if this is where the cops stored marijuana plants they confiscated as evidence? 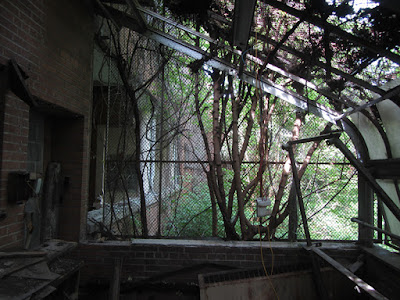 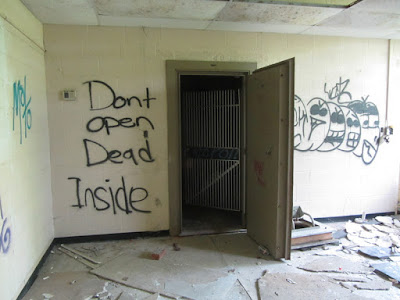 Rifling those drawers for the goods... 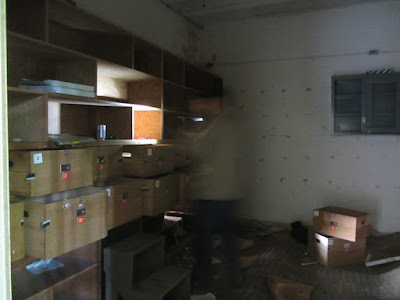 Going down into the basement we soon found the ubiquitous nuclear fallout shelter, and the requisite drums of survival rations...or maybe its a bunch of drums containing toxic zombies like in that movie Return of the Living Dead: 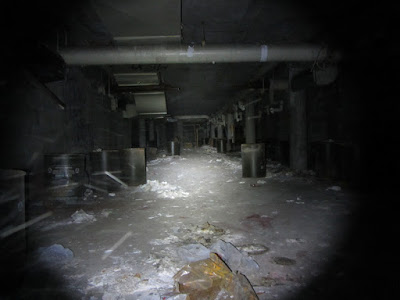 A few abandoned Brush Park mansions in view here, awaiting regentrification...if only someone would build a giant tax-funded hockey stadium across the street: 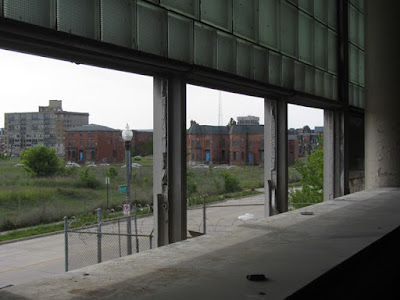 Here is a shot from the roof showing just how close the Brewster Projects were to the former school: 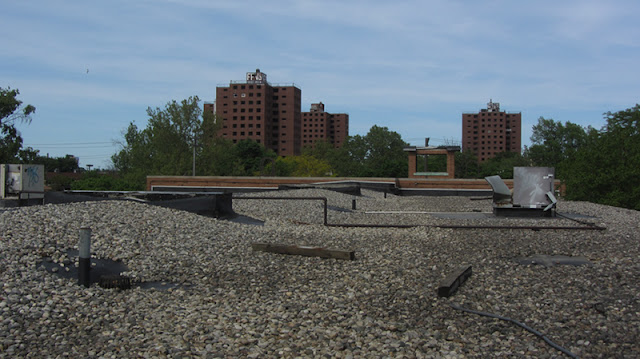 Oh hey, is that a generator? 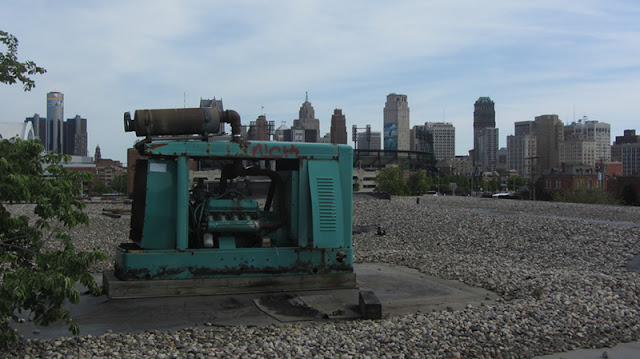 Oh my god, some vandal wrote my name on it! 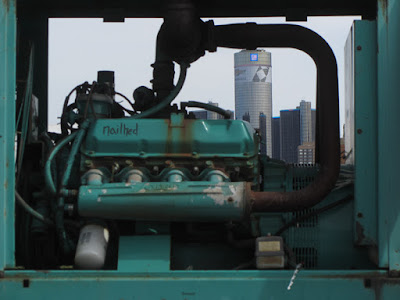 What sort of miscreant lowlife would do such a thing?! Especially with such sophomoric handskills? I mean, it's not even a Nailhead engine, it's a Ford 302... 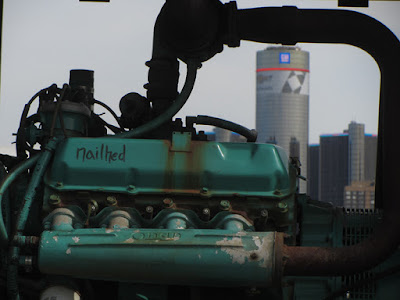 And here is one of the non-abandoned Brush Park mansions, with the skyscrapers of Grand Circus Park in the background: 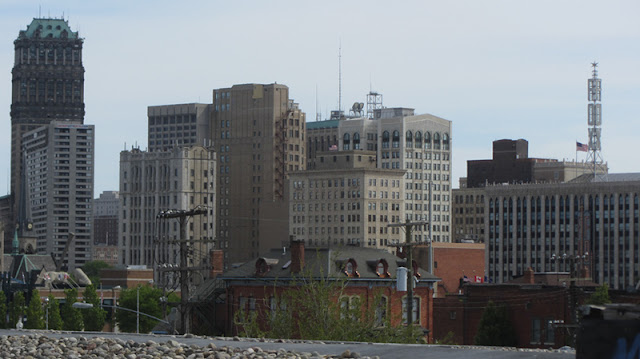 Here is St. John's Episcopal Church (built from 1858 to 1861), along with the looming black tower of our energy monopoly overlords, Detroit Edison: 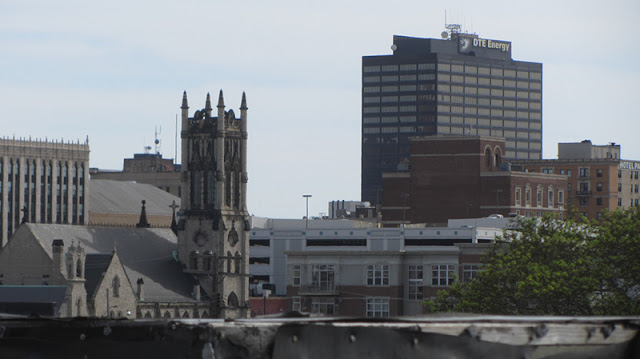 The crime lab was demolished in early 2015, and remains a vacant lot to this day, despite the rapid regentrification of the surrounding area.