One of the grandest churches in the city of Detroit (and the third oldest parish) is Old St. Mary’s. In the heart of what is now Greektown, it originated in 1834 under the Swiss-German missionary Fr. Martin Kundig for a large group of German Catholics who were arriving from the farming village of Neustadt. 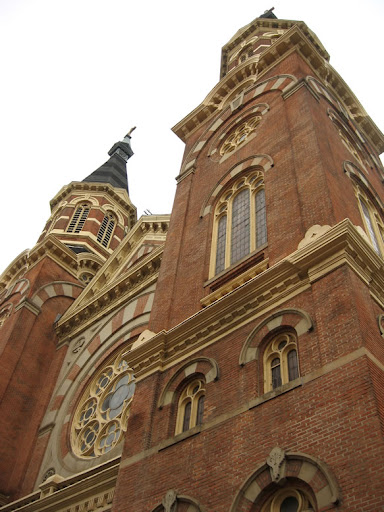 The land was acquired from Antoine Beaubien himself, head of one of the original land-owning families of Detroit, from the 1700s (hence Beaubien Street). He sold it for one dollar; not necessarily because he was generous, but because that way it would keep those damned 'krauts out of the then-overcrowded Ste. Anne’s. There was a bit of "ethnic rivalry" still intact from the old world in Detroit in those days. The north tower of the church houses three of the four bells from the original c.1841 church that stood on this site. They were also donated by Antoine Beaubien and his wife. Maybe he wasn't such a bad guy after all.

St. Mary's was the first German parish within city limits when it was founded. The only two churches in the city older than St. Mary's are Ste. Anne's (founded by French in 1701), and Most Holy Trinity (founded by Irish, also under Fr. Kundig, in 1834). 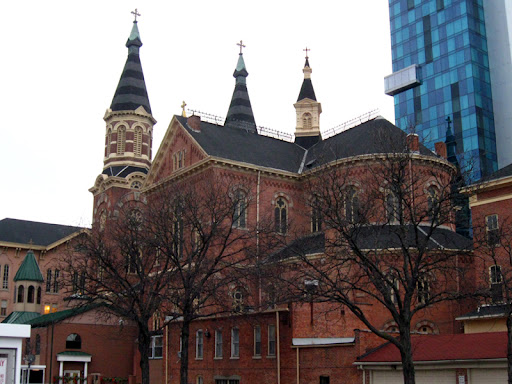 Old St. Mary's served as the mother church of several other German parishes in Detroit as the population expanded, including St. Joseph's, St. Anthony's, and St. Boniface. Although it seats 1,200 people, today Old St. Mary's congregation has a mere 600 members. 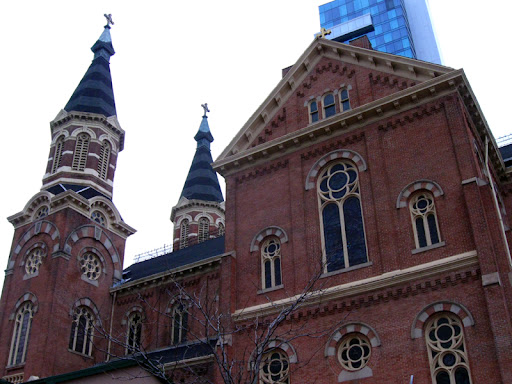 Designed by noted church architect Peter Dederichs, he combined both Romanesque and Venetian Renassiance influences in the building. He was also a member of the parish here at Old St. Mary’s and was born in Detroit, but received his training as an architect in Germany. 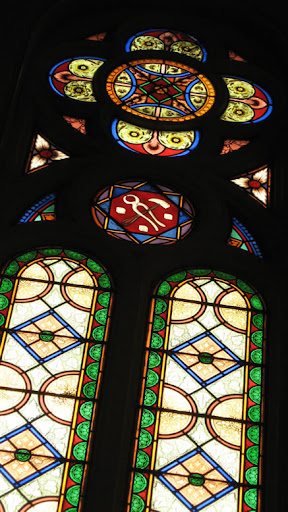 Over the decades the parish eventually went from being German to Belgian, to Italian, to Greek, and today it’s really a mix, but mostly Greek and Italian-descended families. In 1911, this church housed St. Peter Claver, which was the first mission for Detroit’s Afro-American Catholics until it moved to nearby Sacred Heart in 1938. 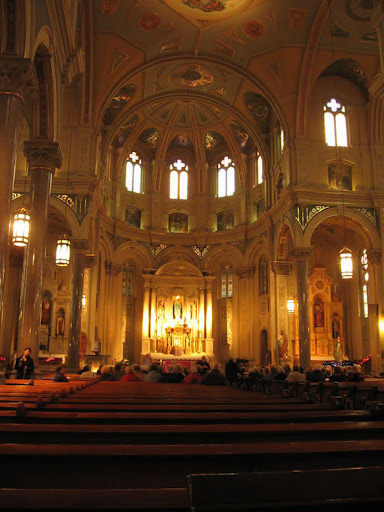 The ceilings are 90 feet high, and the high altar came out of the original church. The windows are rolled cathedral glass, and were designed by the firm of Friedericks & Staffin (which later became the Detroit Stained Glass Works). 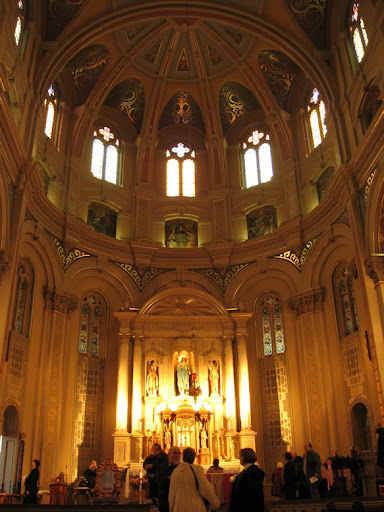 Peter Dederichs was also a member of this parish and besides designing this new building in 1884, he had also designed the pipe organ of the original church in 1843. The same organ was transferred into this new church when it was completed, but it was replaced in 1928 by a Kilgen organ that was the twin of the organ in St. Patrick's Cathedral in New York. It was replaced again in 1990 by organ builder David Wigton, using white oak felled here in Michigan: 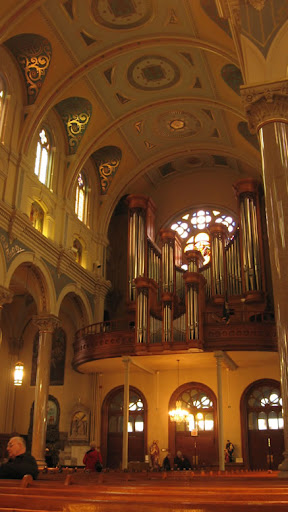 Ironically, it got its beautiful dark patina from the heat and smoke of the Good Friday fire of 1994, which destroyed one of the side altars. It contains 72 ranks and has been called one of the finest instruments in America. You can hear this organ on episode #113 of the radio show "Pipe Dreams." By the way, "Pipe Dreams" is still broadcast in Detroit on 90.9FM WRCJ, on Sunday afternoons from 2-4pm. 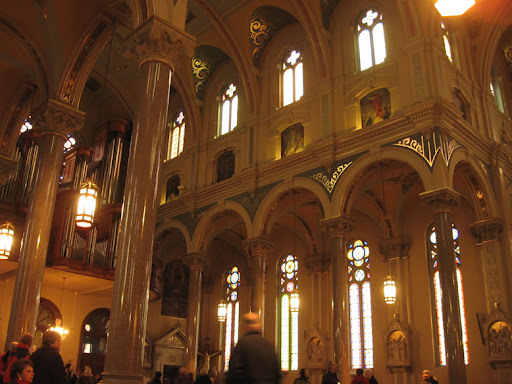 I was here a few years ago, and the organist had played one of my favorite Bach fugues, the thunderous Passacaglia & Fugue, which seemed to shake the entire building. I have not yet seen a more impressive looking organ anywhere else in the city. 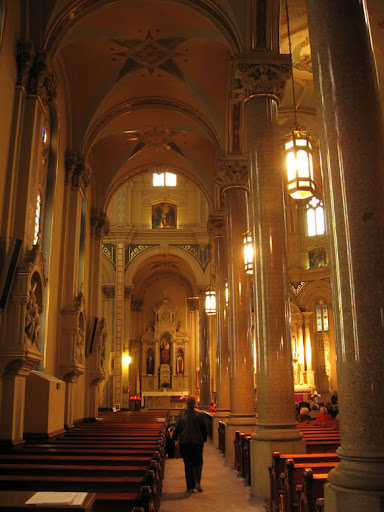 This time however, as I was wandering about, I noticed that somebody had somehow gotten up into the organ loft with the organist. Well, why not me? So I wandered around and quickly found a stair in one of the grottoes that went up there but the door at the halfway point was locked. I eventually found an elevator in the newer addition that took me up there. 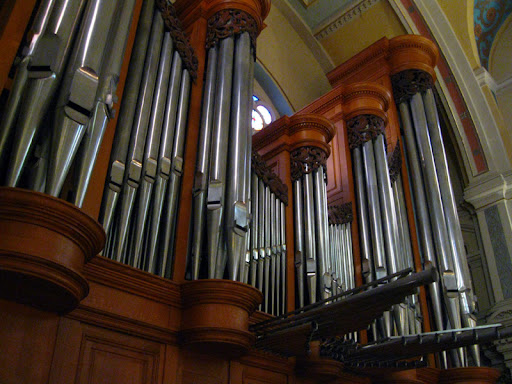 What a magnificent piece of hardware…almost looks like naval guns trained defiantly at the enemy... 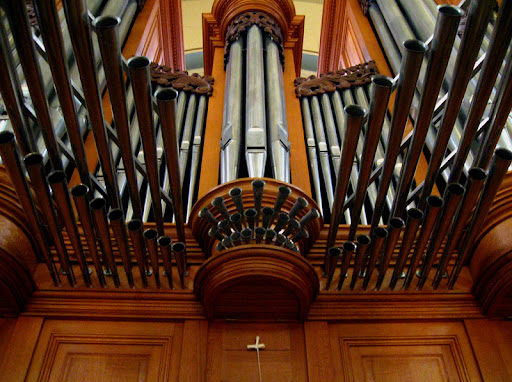 Looking out across the sanctuary was incredible. A harpsichord sat nearby, in readiness for the Christmas Mass baroque concert. 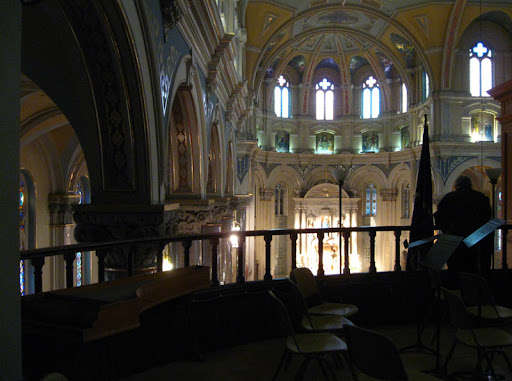 Since my original visit, I now return to Old St. Mary's at least a few times every year to take in performances from their secular musical program.

Out a round window I saw across the street to the old St Mary Parish School, which predates the current church (built c.1868), and was currently under restoration: 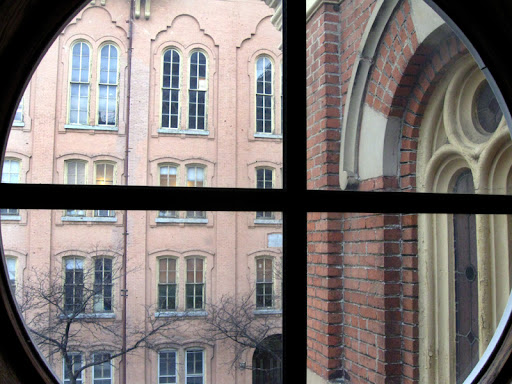 The interior of this church is absolutely massive, and always reminds me of what it might be like to stand in one of the great ancient basilicas of the Middle East and early Christianity. The shiny pillars you see are pure solid marble highly polished, and were actually acquired at a bargain bin price…you see, in the 1880s when the new State Capitol building in Lansing was being built, they had these columns ordered, but when they arrived it was discovered they were too short. They sat on the docks in Buffalo for days, and the shipping company had to get rid of them since they were taking up space. They were about to have the columns dumped into the water when Peter Dederichs showed up at the last minute and offered to buy them for $4,625. 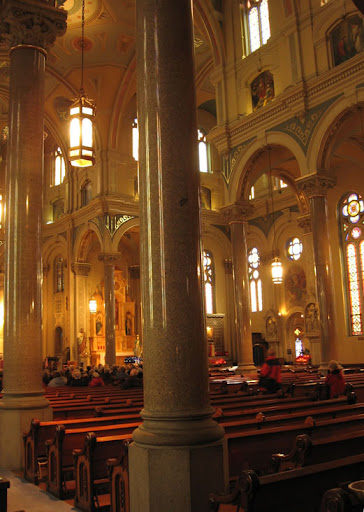 The plans for the church were modified to fit the rich columns, and they have stood here ever since. 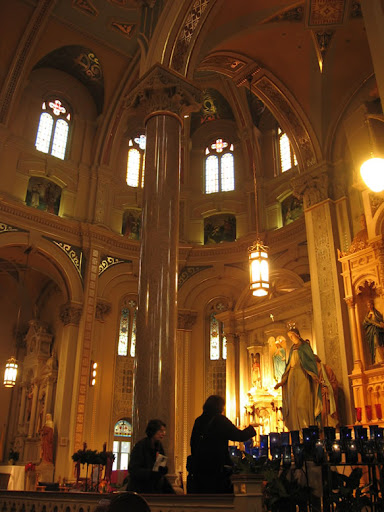 Old St Mary’s is also known as the “Church of the Grottoes,” for its three grottoes located in the sanctuary. Which I unfortunately don’t have any photos of (D'OH!). They were added sometime prior to 1929. The stations of the cross were carved in 1907. 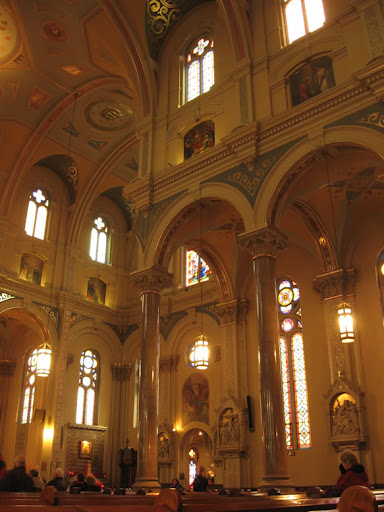 Still numbered, from the days of assigned pews… 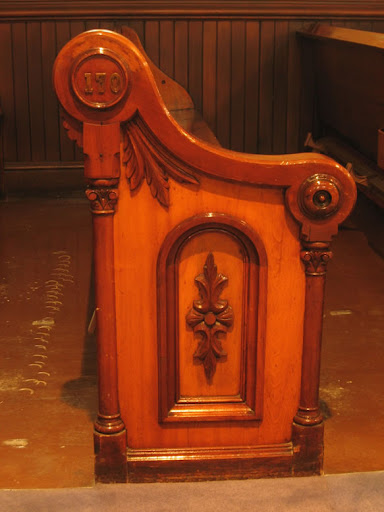 Old St. Mary's is also known for having been the place of baptism for the first ever Polish Roman Catholic to be ordained priest in America. This was also the place where he was given his ordainment by Bishop Foley in 1889, and at that time I believe St. Mary's was the Cathedral of Detroit.

Email ThisBlogThis!Share to TwitterShare to FacebookShare to Pinterest
Labels: Houses of the Holy