In my first post about Maybury Sanatorium I told the history of the institution, and showed you four old houses that used to be part of the hospital complex, which are now demolished. In this second episode I will show you some of the other ruins of the sanatorium that can still be found in the woods today. I had heard a rumor years ago that there was still an underground tunnel somewhere in the woods that had somehow escaped demolition in 1972 when the sanatorium was converted into a state park, and I finally found it...read on. Just remember that when those other copycat websites start talking about it, you saw it here first. As usual. Without advertisements or cookies. 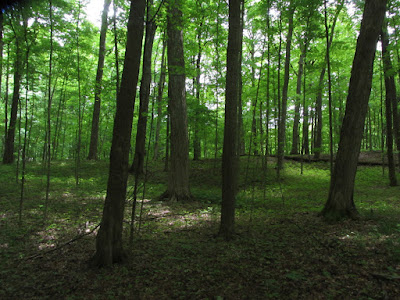 Here's one of the old overgrown sanatorium roads that can still be seen in the park: 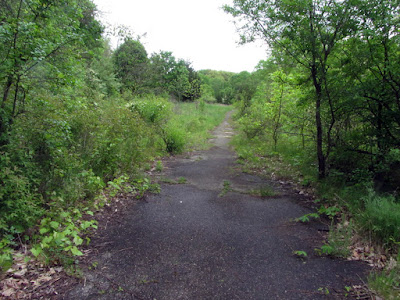 I have always thought that this overgrown concrete path may actually have a steam tunnel under it, but I was never able to find any entrance: 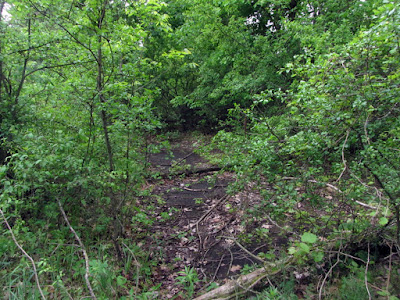 This is probably the most visible and recognizable ruin of the old sanatorium still visible today, as it sits right alongside a very busy intersection of several trails: 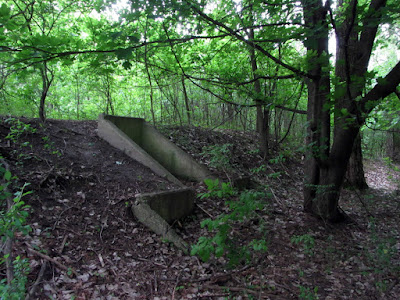 I believe there used to be an old valve station here for the water system. 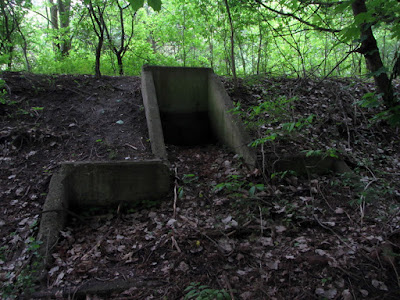 This whole area is rather interesting, as there are several small earthen mounds gathered here where bulldozers apparently pushed a bunch of debris during demolition, and it was left there until the forest engulfed it. It would be a good place to go hunting for artifacts. I found an old-school glass lid to a mason jar, without even trying: 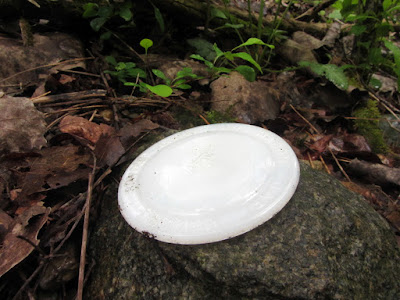 The trunk of this old tree reveals that the forest floor actually used to be a parking lot: 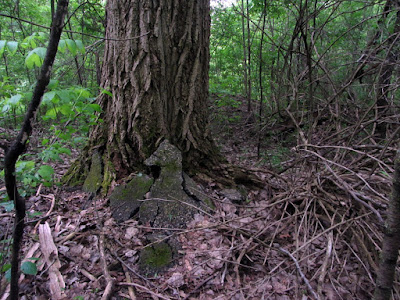 Still bushwhacking, I came across a fire hydrant all by itself in the middle of the woods: 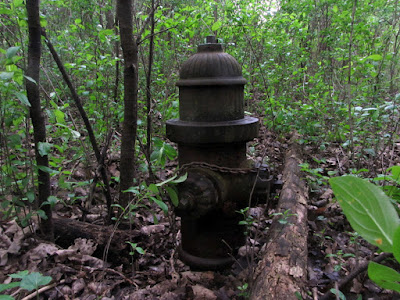 It was stamped as having been made at the Michigan Valve Foundry, Detroit, in 1937... 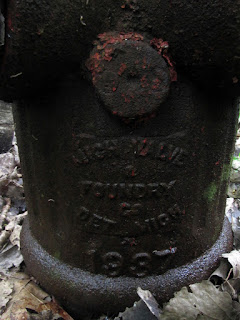 As it so happens, I explored the ruins of that foundry in another post.

Uh-oh, it looks like one of the electrical transformers from the powerhouse was just bulldozed into the woods next to a pond... 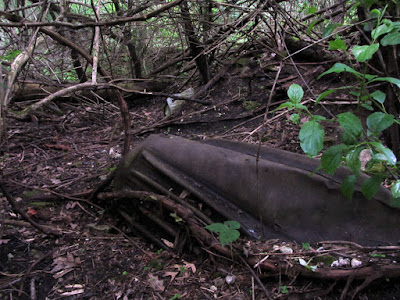 Don't worry, I'm sure they removed all the toxic PCB oil from it first, rather than letting it spill into our groundwater... 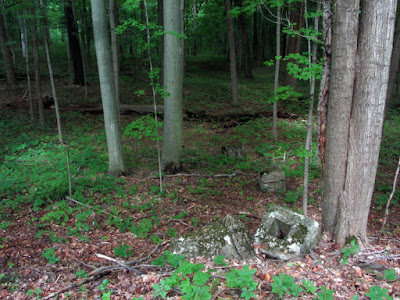 Continuing up the ridge where the huge old Ambulatory Building used to stand, I noticed a few chunks of really old concrete tumbling down into a bowl in the woods. 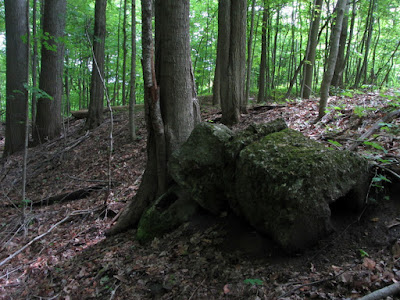 Not really sure what these could have been. 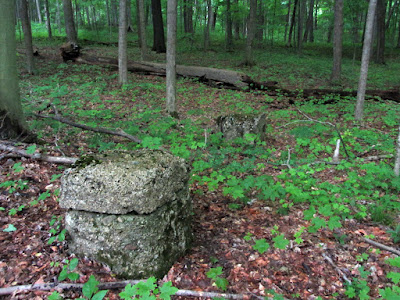 Here are the ruins of the old watertower...if you find nothing else at Maybury, you should at least be able to find this, since it's right in the middle of a trail: 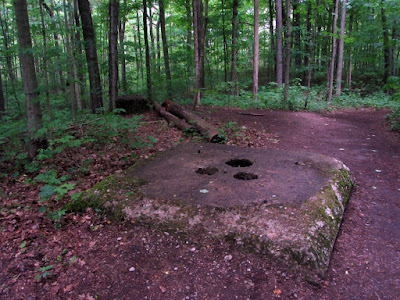 There's a large concrete pad in the center where the pipes used to go, with four smaller footings in a square around it, where the legs of the tower were once supported: 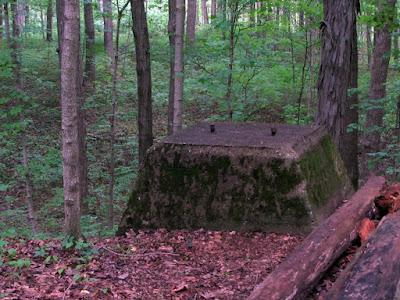 The watertower provided the 60 million gallons needed by the sanatorium per year, including needs for fire protection, steam heat, laundry, cooking, hospital uses, bathing, landscaping, ice-making, and cooking. The water was pulled from artesian springs on the eastern part of the property and piped into the tower via a pump station next to the powerhouse. 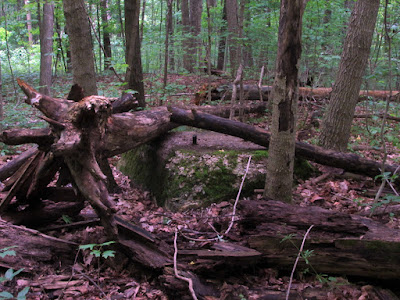 For that matter however, I have to say I believe there are also artesian springs in the southwestern corner of the property, because when I hiked there with my girl recently, we found water seeping right out of the ground in some areas. 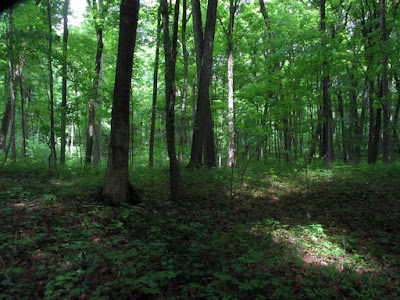 Then, suddenly, I found it-- 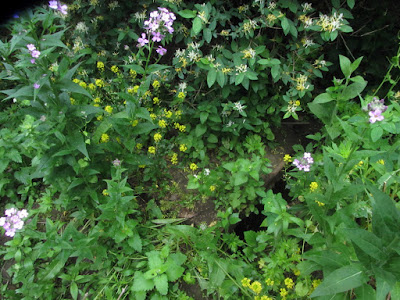 Can you see it now? 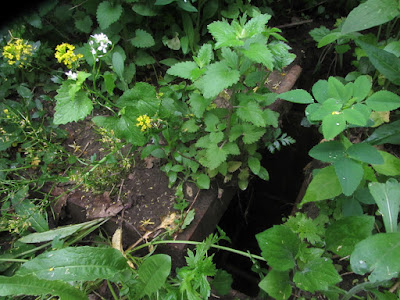 It's an access hatch, slightly ajar...the massive lid weighs about 300lbs with all that soil and plant matter on top of it, but I was able to scootch it open just enough to get inside.

Still expecting it to be a short, caved-in tunnel, I looked around for a pebble to throw in, to see if it was flooded. Fortunately I did not hear a "kerplunk," or any startled animal sounds, but the long echoes of it hitting the bottom indicated that it must be a pretty damn big tunnel, much to my surprise. Excitedly, I began wrenching the cover back some more so that I could go in. The air didn't smell bad either...another unexpected surprise. 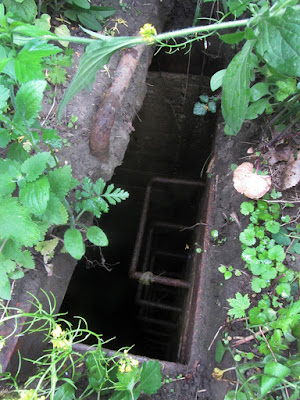 Here's the other side of the lid: 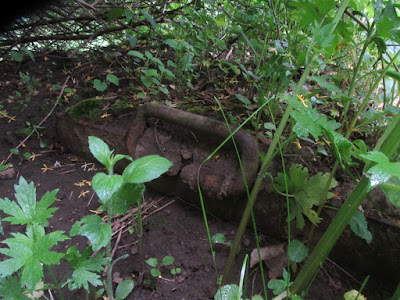 After clearing the cobwebs away with a stick, I began descending. Pretty soon I realized that this was no tunnel, it was a gigantic underground room! To my left was a wall about 25 feet away, but to my right the nearest wall was another 50 feet away or more, and it was apparent that the room continued around a corner for an unknown distance... 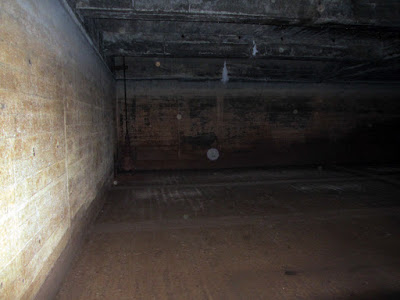 It was so dark that my flashlight couldn't even show me how far the room went, but judging by the long echoes of my footsteps, it was a massive space around me. The distance from the hatch cover was about 15 feet: 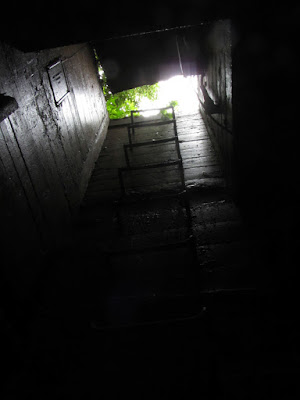 ...I fired a flash photo to see what it would show me: 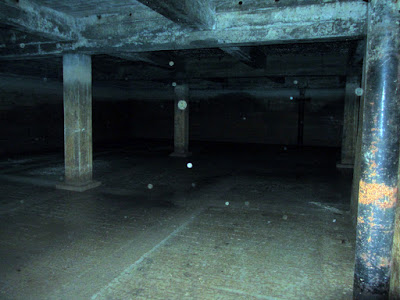 This must have been the water reservoir near the powerhouse that was used for steam heating in the sanatorium. Clearly it was not a tunnel. I had been inside water reservoirs like this before, at Traverse City Asylum, and the Wayne County Training School.

Wandering out into the black abyss, I was glad I knew my camera's controls by feel. Beads of moisture shone on the ceiling, and calcium deposits marked the high-water point on the walls and columns: 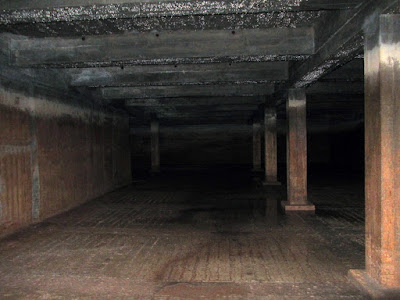 The fact that the only sign of human presence to be found in here was a single can of Sprite laying next to the ladder that looked like it dated from the early 2000s proved that no one really knew about this place. And honestly the can could've been tossed down here by people curious about what was below, but who were unable to fit through the gap or move the heavy lid to get in. So I might be the first person to have entered this chamber since 1972 or whenever it was sealed. The fact that there's not even graffiti on the walls is surprising, since when it was abandoned after 1969 plenty of people were exploring the sanatorium, prying into its nooks and crannies, and vandalizing everything.

Steady dripping had worn a geometrical pattern onto the surprisingly clean floor: 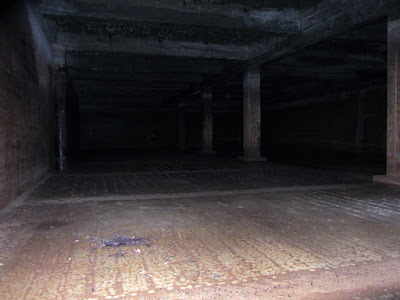 Having reached the far corner, I turned to look back at the access hatch...you can see that the room continues at least another 50 feet into the darkness to the left: 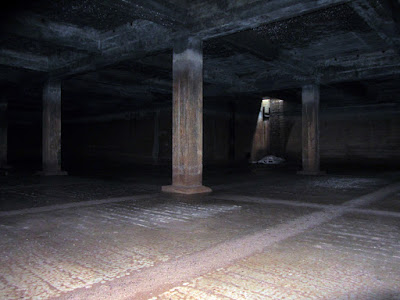 I assume that the location of the powerhouse and this reservoir have to do with the artesian springs; i.e., it was because the springs were located in this area that Mr. Maybury decided to locate the reservoir for the steam plant and ice plant here. 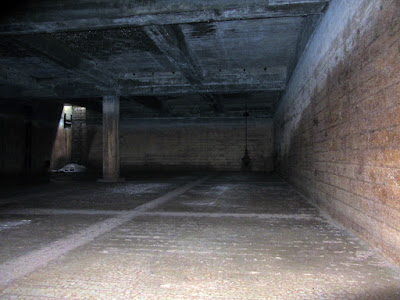 Well, there you have it, my friends...finally proof that underground ruins do still exist at Maybury State Park! Now don't do anything stupid like get hurt or killed, to ruin it for the rest of us. Don't ask me where the entrance is, and if you figure it out don't go broadcasting it just to feel popular.

Maybe later in the year I will go back out to the park with a Sanborn map and a compass now that I have a hard reference point to work from, and see if more actual tunnels still exist out there. I have a feeling they might.