The year 2006 was the first time Chisel and I were able to pull ourselves out of the Packard Plant's considerable gravitational field and manage to explore this handful of handsome buildings that sat practically next-door. We assumed that they were originally part of the Packard Motors complex, but I later learned this was not the case. 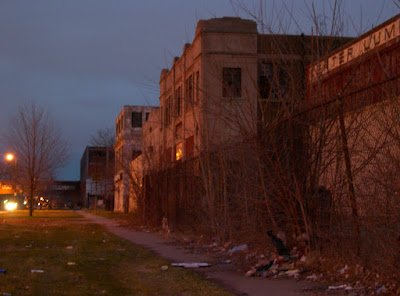 The white building on the far left was built in 1915 as the Remy Engineering Laboratory, at 1623 E. Grand Boulevard. The Remy Electric Co. was founded in Indiana in 1896, making magnetos, generators, distributors, and crank-starters for early automobiles. They were a competitor of Dayton Engineering Company Laboratories (Delco), founded by Charles Kettering, inventor of the first successful electric crank-starter, which was installed on a Cadillac. Eventually Remy and Delco were acquired by General Motors and merged into one division under the all-encompassing GM corporate umbrella. The Delco-Remy name was still seen stamped on components of GM cars well into the 1980s (if I recall correctly from the Buick I once owned).

The two buildings in the middle (1627 and 1637 E. Grand Blvd.) were labeled "factory" and "beer warehouse" respectively, although I am not good enough to deduce what the Sanborn map's abbreviation stood for, and I can't remember offhand what brewing company in Detroit started with a "C"...Anyway, perhaps then it makes more sense that the sign currently hanging from this complex says "COMING SOON: Packard Brewing Company."

The limestone building on the far right, at 1651 E. Grand Boulevard, was built in 1926 as "The Udylite Company Plant No. 1" and labeled as "plating equipment & supplies" on the Sanborn map. Some of the plant had already been demolished, and in true Packard form, there was a stripped camper outside: 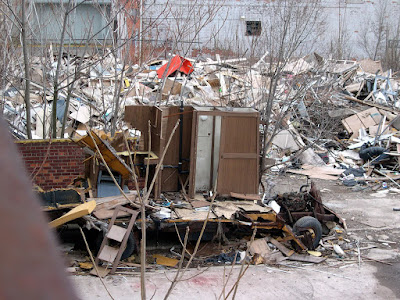 Apparently there wasn't much on the first floor, because I only have photographs from the second. I guess I was just interested in getting photos of the Packard Plant from here? 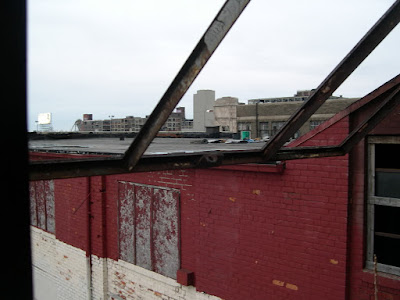 The Sanborn says that Udylite's first floor was "laboratory" and that the second floor was "offices." These photos are from the "factory" building next to it, which has now been demolished. The small warehouse building (seen above) was also demolished. 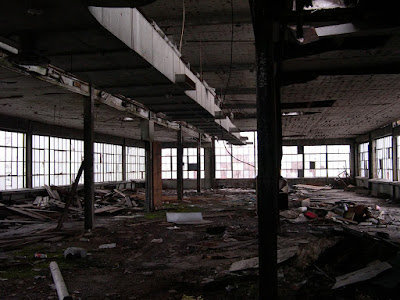 I have to say, for a factory, this was kinda snazzy...I mean dig those windows! 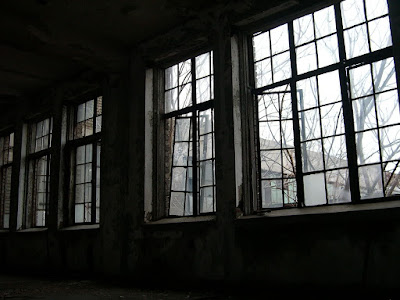 Udylite was another company that was originally founded in Indiana (in 1919), and found its way to this particular block in the Motor City. They relocated here in 1927, when this building was completed. It was founded by Marvin J. Udy, "who developed a method of electrode deposition of cadmium on metal." His company went on to develop many new electroplating processes, and also later gave birth to the subsidiaries Process Electronics Corporation (PEC) of Roseville, Michigan, and the Oxy Metal Industrial Corporation of Warren, Michigan. 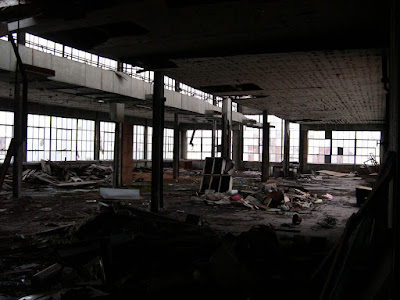 There is an article on pfonline.com that goes into great depth on the "History of Chromium Plating," published on the occasion of the 75th anniversary of the founding of the American Electroplaters Society. It was written by a noted Dr. George Dubpernell, who spent 60 years in the field of electroplating in Detroit, beginning in 1919 with the Detroit Battery Co., and then with The Udylite Corp. in 1924. He was retired in the posh suburb of Huntington Woods when his article was printed. Dr. Dubpernell held at least 10 patents, and was an emeritus member of the American Chemical Society. 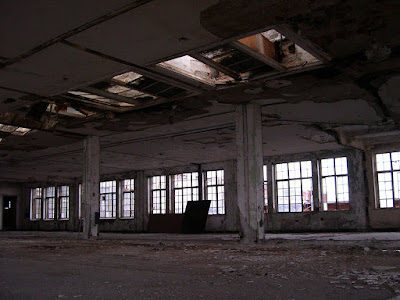 Most of the article is technical and a little over my head, but I discerned a few things: In 1927 the General Chromium Corp. and the Udylite Process Co. may have been merged, from 1927 to '28 Philip P. Hale was a plant superintendent; a few months later this firm became Nicholl-Hale Chrome Service, Inc. Simultaneously, Marvin J. Udy of the Electro-Metallurgical Company spent much of his time in the General Chromium plant (also in Detroit), fermenting his engineering ideas on methods of chromium plating. Mr. Udy and Mr. Hale developed the "Hale-Udy composite bus bar," an invention that allowed for more "convenient" electroplating at a single voltage for all components. 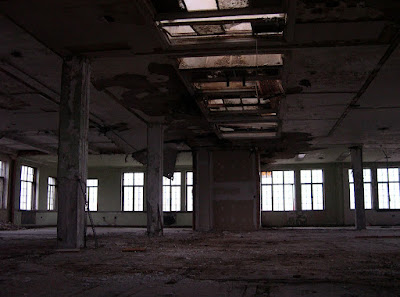 Dr. Dubpernell wrote that "Udy's employment with Electrometallurgical Company was terminated in 1931, and he did not return to plating work"...huh, sounds ominous. Anyway, Mr. Hale filed a patent on the composite bus bar in 1932. A successor (Clarence Peger) dubbed it the "Reversible Rack 2 Bus Bar System," and using it he "made a good contribution to chromium plating technology based upon its use."


The practice in hard chromium plating was to calculate the exact surface area of the part to be plated and to apply sufficient current to get the required current density for good plating at a known speed. Udy took great pleasure often times in starting a discussion by announcing in a loud tone of voice, "All chromium plating should be done at 4.2 volts and the current to the individual piece disregarded." This brought on vigorous discussion as intended, but all were unable to discourage Mr. Udy. He and Phil Hale built a huge composite bus bar about 12 or 15 feet long, so that a number of parts to be plated could be attached to the cathode bar and a number of lead anodes to the anode bar, and the whole operated at a single voltage. 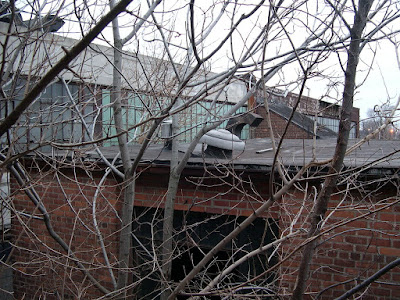 There was also something called "The Dubpernell test," apparently named after our distinguished author. "This extremely simple test has been poorly described in the literature due to its clandestine origin," Dubpernell begins...


A thin layer of copper is plated over the chromium deposit and microscopically examined to determine the extent of porosity and cracking. In the early days, the writer and others were employed under conditions of strict secrecy up until about 1940, and it was pure chance that the test was disclosed to Professor E.M. Baker in a discussion on the train from Detroit to Ann Arbor, late in 1927. It then formed a basis for the Baker and Pinner paper published a few months later. Brief descriptions of the test have been given in all four editions of Modern Electroplating. However, the most recent edition is by far the most adequate and includes a discussion of the effect of moderate heat treatment (e.g., hot water rinsing to bring out the normal crack structure of chromium deposits). An excellent recent paper by J.W. Manquen describes the use of an electronic thickness tester with the Dubpernell test in a non-destructive manner for quality control purposes.

I have to say, that is always a cool story when top-secret info is leaked during a train ride between cities...sounds like a scene from an Alfred Hitchcock movie. 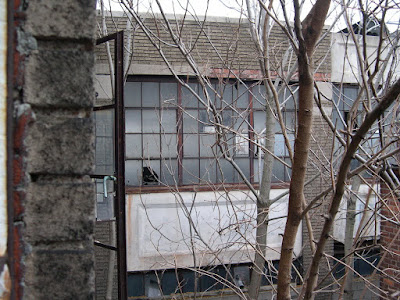 Most of the other Google hits for "Udylite" have to do with patents, court cases, or the Toxic Substances Control Act. But hey, those chrome tailfins back in the day sure were cool, weren't they?! 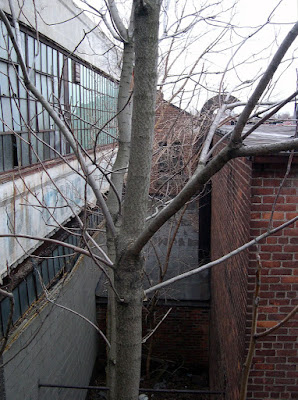 You may recall an older article of mine dealing with chrome plating, and the Michigan Chrome & Chemical Co. on Grinnell Avenue. 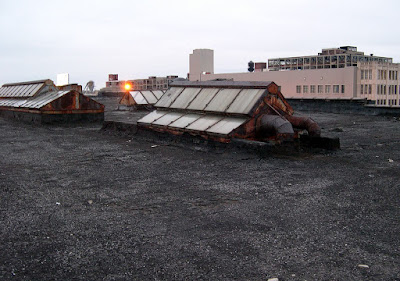 The buildings behind this one, fronting on Palmer Avenue were originally an ice company in 1915, but later taken over by the Jersey Creamery Co.: 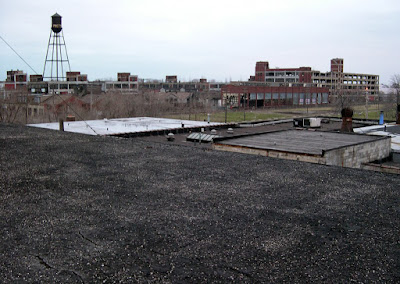 Of course, the Packard Plant is seen looming prominently in the background. 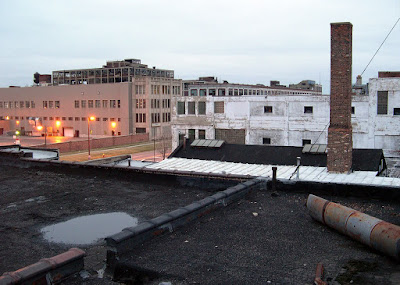 Packard's Building 90 is still standing along the train tracks, and Building 92 hadn't yet really begun collapsing yet: 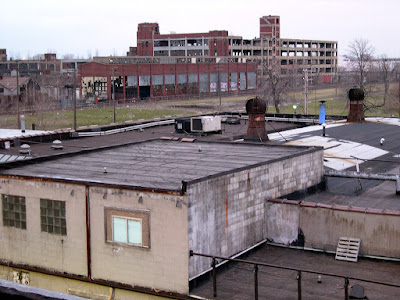 As an added bonus, here's a couple photos that I drunkenly took late one rainy night as we wandered on foot from the Packard Plant, I intended to come back for better photos at some point later, but never did. 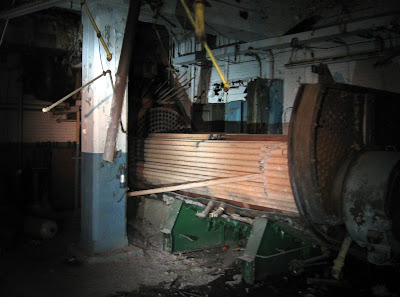 According to a Sanborn map (which I can't find now), it was originally the Central Overall Linen Supply Co.

Admittedly this one was not founded in Indiana, but by local Jewish immigrant Morris Shaver, who started by making laundry deliveries while using the streetcar. His company eventually "became the largest of its kind in Detroit," according to author Sidney M. Bolkosky. Apparently there were quite a few cloth or clothing trade related businesses in Detroit like this one founded by Jewish immigrants, a "logical outgrowth of the tailoring profession and the traditional European work of itinerant agents, known as Wocher..." 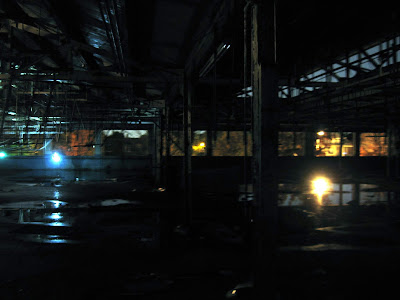 It was demolished sometime around 2010. 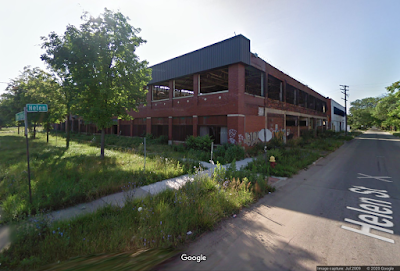