You must forgive me for not having a good overall exterior shot of The St. Francis Boys' Home (nor many interior ones for that matter), as both times I was there I was in a "rush," and I didn't get a chance to come back before it was demolished. 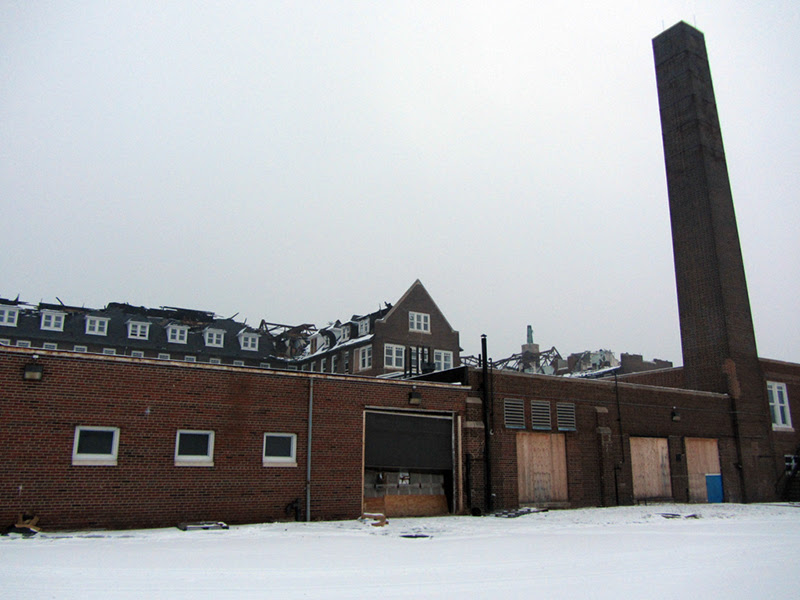 According to Patricia Ibbotson's book Detroit's Hospitals, Healers, and Helpers, the St. Francis Home for Orphan Boys was established in 1909 in a building on Woodward in Highland Park, between Victor and Ferris. Obviously that is exactly where Henry Ford's new Model T Plant was built a few years later, and according to popular belief Mr. Ford offered to not only buy them out but also donated new land for another orphanage to be built here, at 2701 Fenkell. 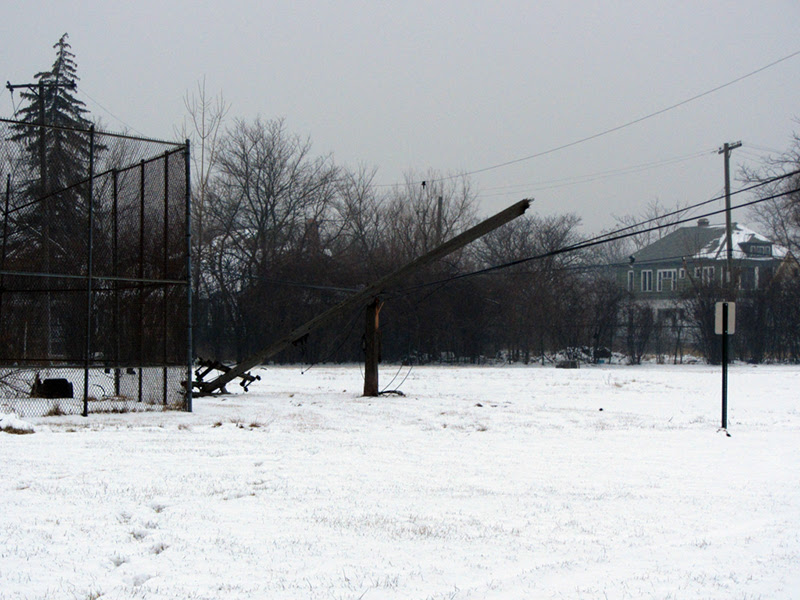 The book Archdiocese of Detroit by Roman Godzak says that it was one of the biggest and best-known child care facilities in Detroit, built to hold up to 500 boys under the care of the Sisters of St. Joseph. It was designed by Albert Kahn and completed in 1921. 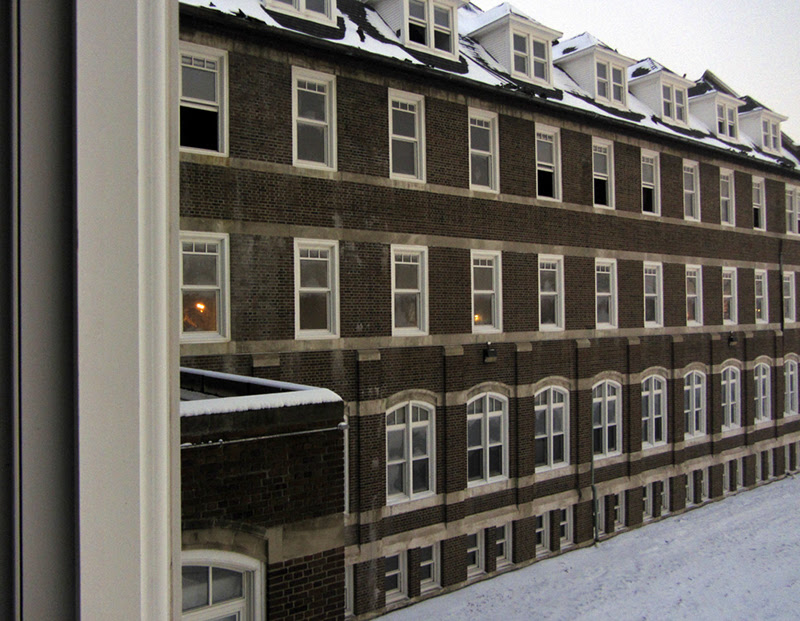 An interesting footnote in the book Seasons of Grace: A History of the Catholic Archdiocese of Detroit says that the Chicago Defender once alleged in the 1920s that no parochial schools in Detroit accepted black children. The Michigan Catholic issued a rebuttal to the story, pointing out that the St. Francis Boys' Home did. 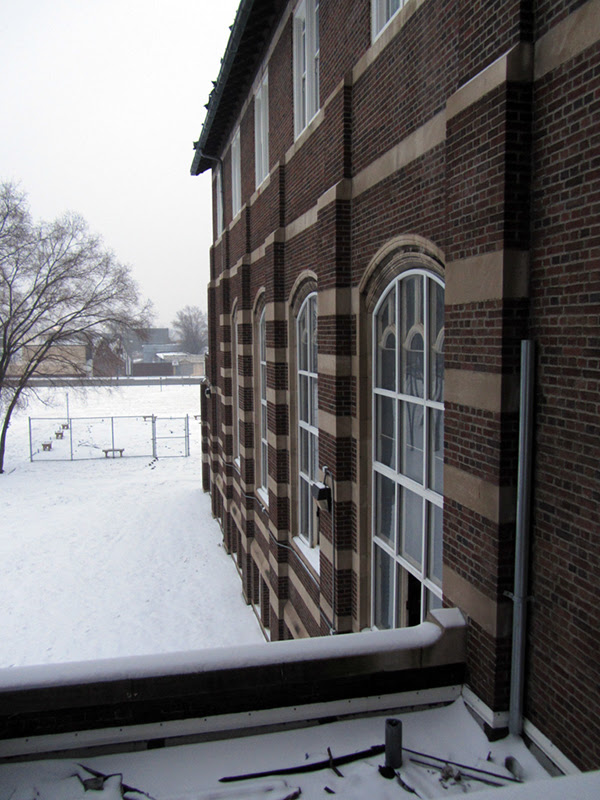 The book Detroit's Polonia tells briefly of one particularly striped graduate of St. Francis Boys' Home, Tech Sergeant Walter Sajewicz, who went on to join the army around World War II and became an engineering aide in the Manhattan Project building the first atom bomb.

Here's the chapel, which contained a nice old pipe organ and some stained glass windows (behind me) that I apparently was unable to get photos of: 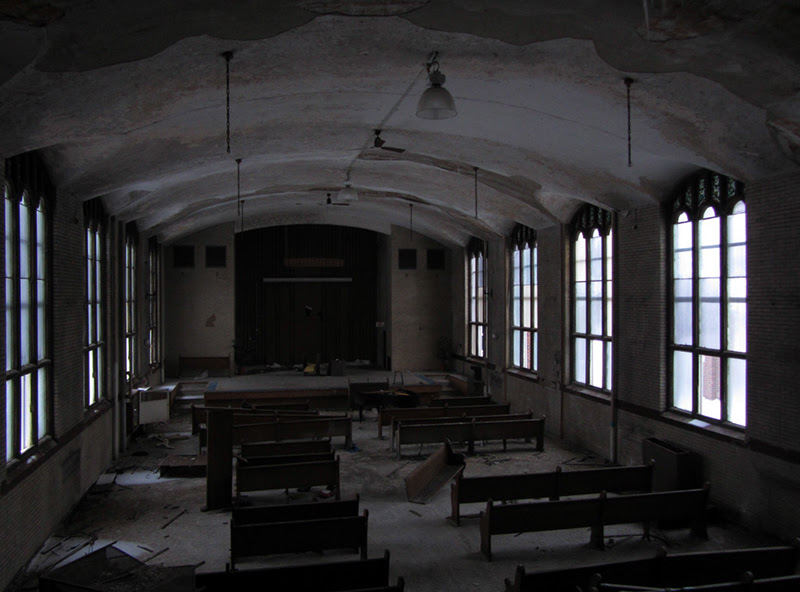 The St. Francis Boys' Home was shut down in the early 1990s and at some point soon afterward became part of the Detroit Public Schools, when the new Paul Robeson Academy program moved in. Today the "St. Francis Family Center" is located at 17500 W 8 Mile Road.

According to Detroit Public Schools, Robeson was a "school of choice," meaning that pupils needed at least a 2.5 grade point average in order to enroll, and their parents were required to pledge their support and participation in the program. 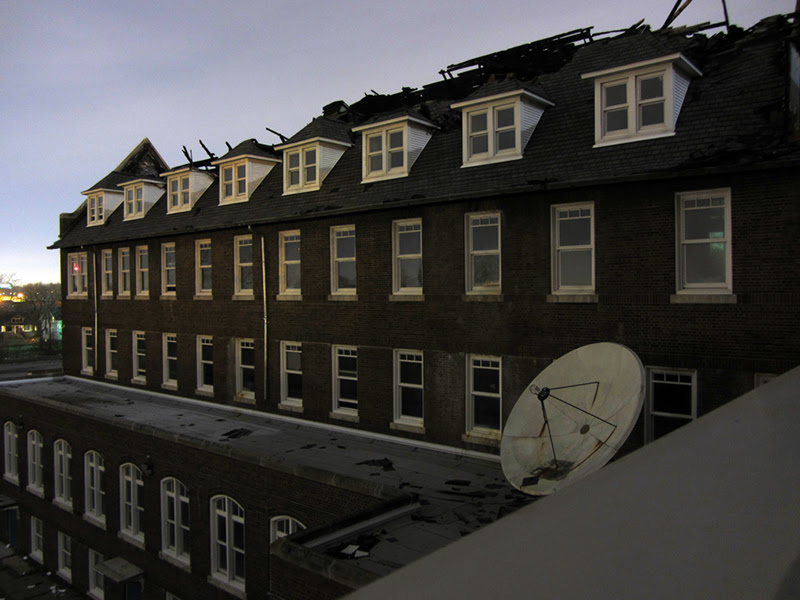 Robeson Academy was named after "an influential African-American singer, actor and social activist." It was the first public school program in America to have an Afro-centric curriculum, according to the Detroit Public Schools, and was designed to provide "culturally responsive teaching techniques that prepare students both academically and culturally to become productive citizens of the 21st Century."

While I have no problem with Afro-centric curriculum, Black Jesus might be stepping over that "separation of church and state" line a little bit there, heh: 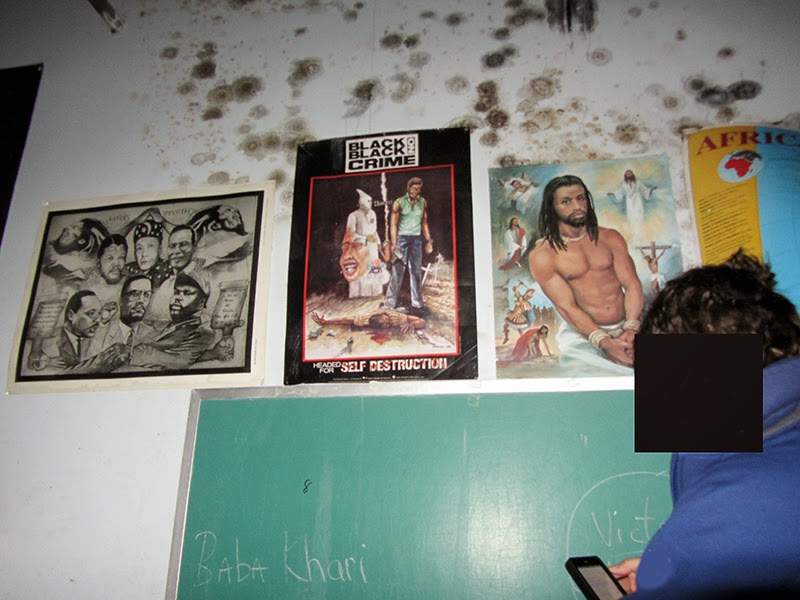 Due to declining enrollment Robeson merged with the Malcolm X Academy for younger students in 2010. The Malcolm X Academy was formed in 1992 at a former elementary school in Warrendale around the same time as the Robeson Academy. At the time that area was still largely white, and surprisingly (or not) many residents protested having an all-black academy move into their neighborhood, especially one that was named after a black radical leader. Undoubtedly they viewed it as "anti-white," and picketed during its opening.

Some even went as far as to vandalize the building by painting swastikas on it. A quote from a New York Times article on the Detroit Public Schools webpage said that the backlash "was so hostile it reminded many people of Little Rock in 1957, not Detroit in 1992." 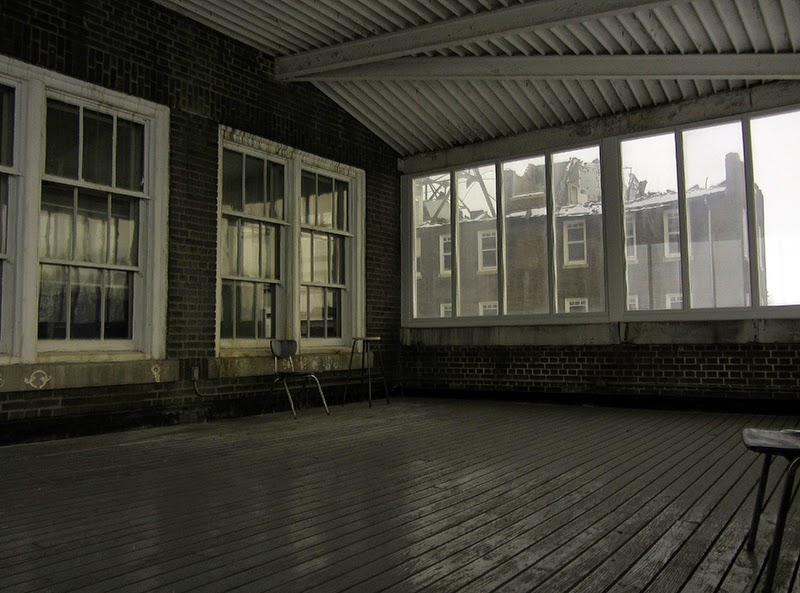 The top floor of the school was burned off in May of 2011 after supposedly being struck by lightning, and the academy was forced to relocate. How it managed to spread to the entire upper floor of the building so easily has never been exactly answered satisfactorily I don't think, and probably shows that some fire codes and simple safety procedures may have been overlooked or ignored. 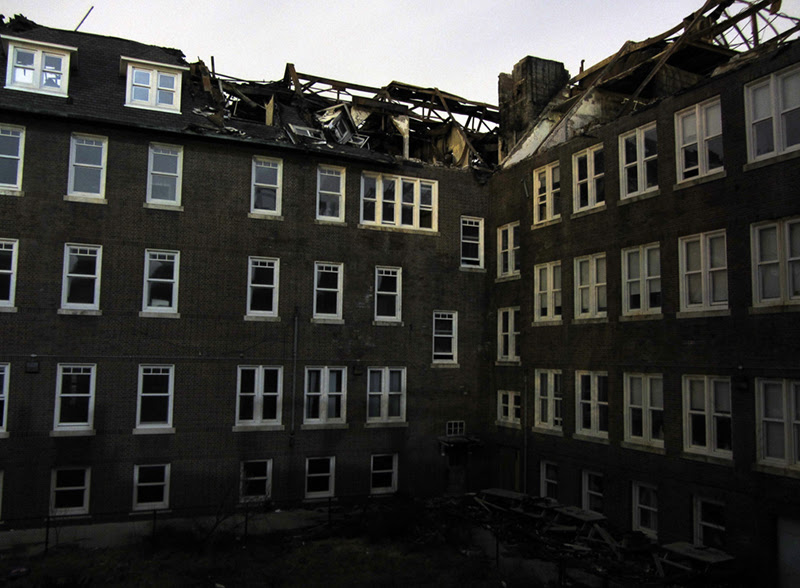 Unfortunately the damage from both the fire, and the amount of water the fire department used to extinguish it, was bad enough to where the structure was no longer feasible to repair. 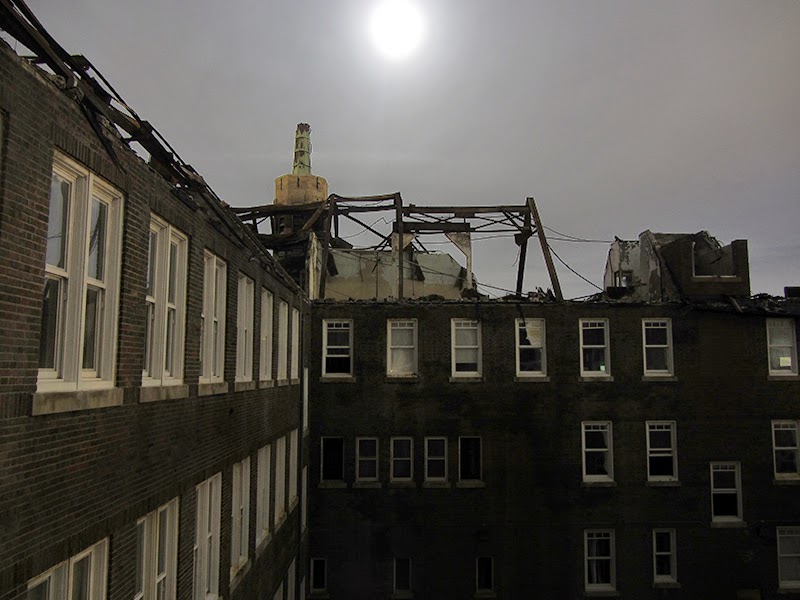 Because of the abrupt way in which it was abandoned--literally a fire drill while class was in session--it was more surreal than usual as far as what was left behind in-situ...there were rows of new laptops just sitting in docking stations, some of the few clocks that had not melted were still ticking, lockers still had kids' backpacks in them, and I think I saw at least one or two half-finished projects still sitting on students' desks from when the fire alarm sounded. 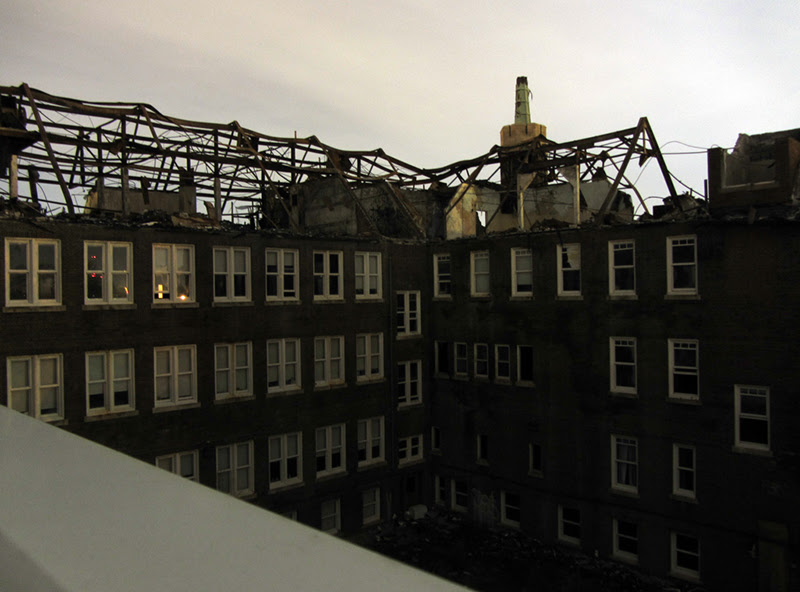 No one was allowed to come back in to recover anything, so here it sat. No one except scrappers and looters of course. I didn't take any photos from the interior simply because it was so dark and so water-damaged. I also didn't want to risk alerting anyone we were inside by light painting photos or firing a flash. 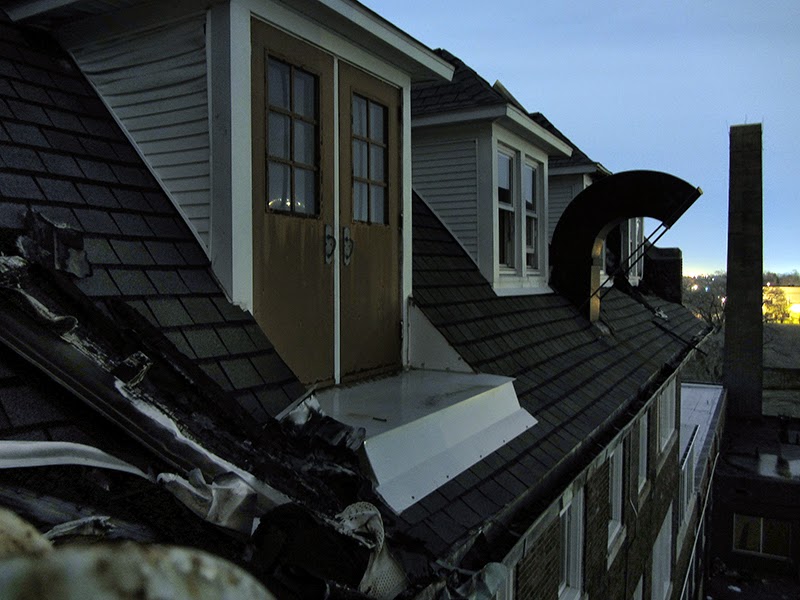 Today, the Robeson / Malcolm X program continues to operate, and resides at 2585 Grove Street near University of Detroit, in the former Hally Magnet Middle School. These two academies have bounced around so many times that it is as if they are sharing in the fate of the lost boys the orphanage served when it opened.

This building at 2701 Fenkell was demolished in the autumn of 2012. 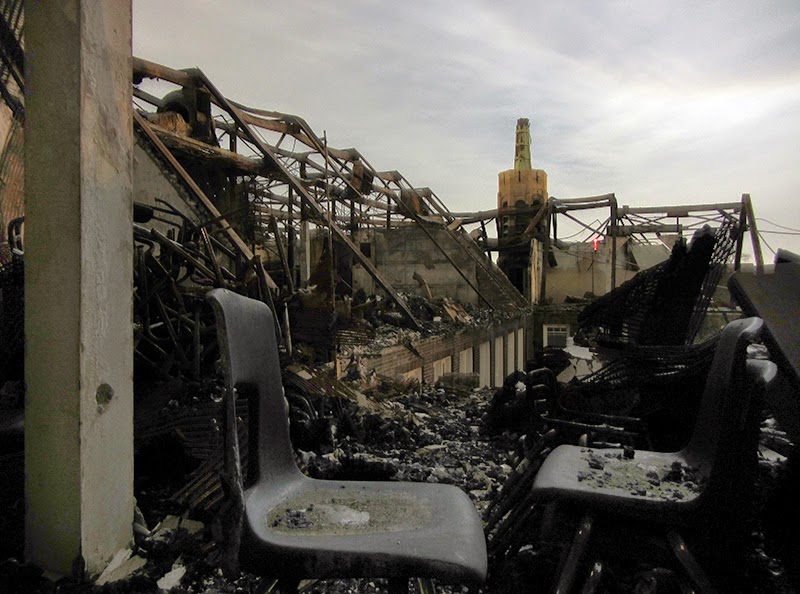 I managed to get a shot of the downtown skyline next to the belfry: 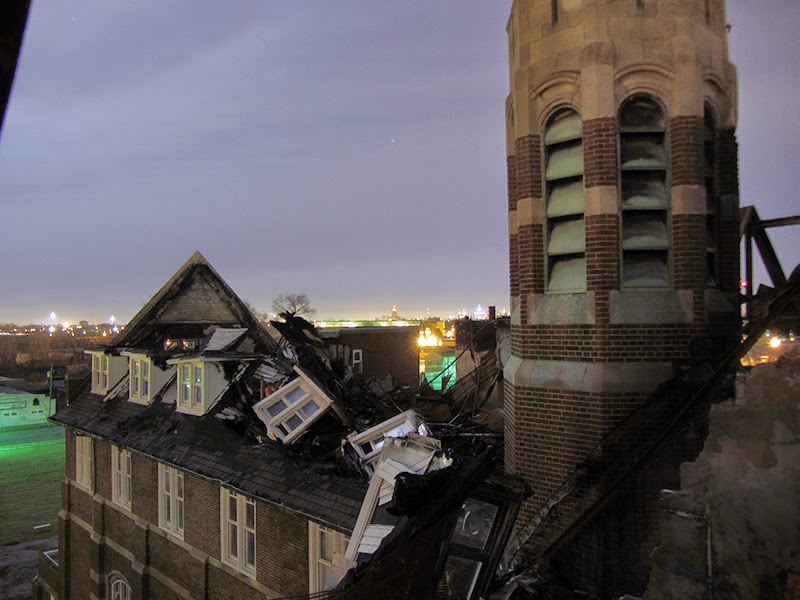 You can't quite see it, but one of the bells was currently wedged halfway through one of the slats of the other side of the belfry because scrappers had tried to steal it.