The End of an Era


As far as Michigan copper mine ruins go, the Centennial #6 is one of the most intact. It is an example of what a headframe / rockhouse looks like (when it's not just a ruined foundation), once a common sight across the land known as "the Copper Country." It is also a familiar landmark to anyone driving along the winding path of US-41 through the heart of Michigan's Copper Country. In fact, the reason US-41 is there and is shaped like it is, is because it follows the copper-rich spine of the Keweenawan Rift, along which are found all of the mining locations of the peninsula. US-41 was built to connect all of these mining villages. 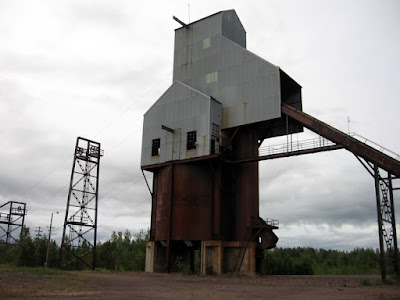 The Centennial Mining Co. was organized in 1876 (the centennial year of American independence, hence the name). According to my colleague Dan at substreet.org however, the shaft that would become the Centennial #6 was first sunk back in 1867 by the Schoolcraft Mining Co. (which was founded in 1863); these structures you see here are all modern additions. The Schoolcraft Mining Co. started digging into the Calumet Conglomerate Lode, going 2,800 feet down without finding much copper, but they kept working the mine's 13 levels until they bankrupted. The Centennial Mining Co. then took over and dug deeper.

I wrote of the Centennial Mine's #2 and #3 shafts, as well as their stamp mill in the following older posts:
The Abandoned Mine Down the Street
Arriving in Centennial
Star of Arcady 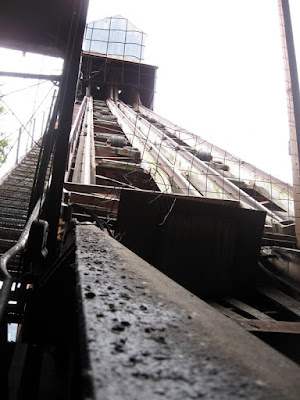 According to my colleague Mike Forgrave of coppercountryexplorer.com, the Centennial eventually operated a total of seven shafts in the area, and in 1896 they were reorganized as the Centennial Copper Co., which was when they started the mine shafts that came to be called the #1 and #2. In 1923 the giant Calumet & Hecla Mining Co. absorbed Centennial as their empire grew across the Keweenaw Range, although during the Great Depression this mine was idled.

This is the tramway, or "skip road"; it's the track that the workers rode down into the shaft, and where the "skips" hauling the ore would come up full before dumping their loads to be crushed and dropped into waiting railcars below, then going back down into the mine for more. So as you can see from the slant of the skip road, this (and most other shafts in the Keweenaw Range) are sunk at about a 45-degree angle to the ground, depending on the site. Inside the shafthouse: 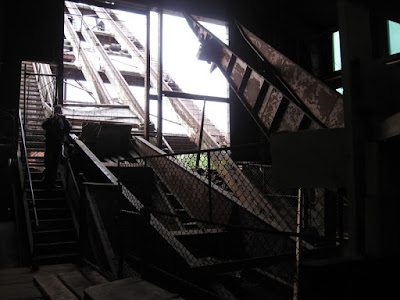 The grating on the floor in the above shot indicates the mouth of the shaft. A drop of up to 3,000 or in some cases 4,000 feet into eternal darkness. At those depths, I’ve read that you can begin to feel the heat of the magma below Earth’s crust.

Can you explore the actual mines? No; they are not naturally ventilated, the shafts are too steep to climb down without gear, and most are flooded up as high as the water table anyway. That said, it is entertaining to note that the security measures on this building at the time consisted of a big rock leaned against a bullet-riddled door to keep it from flapping in the breeze. 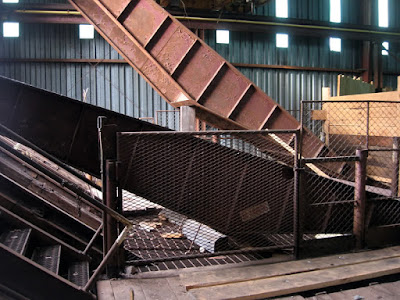 Calumet & Hecla (C&H) worked the #6 shaft steadily from World War II all the way up until 1968, making it one of the very last mines to close in Michigan. Mike Forgrave reminds us however that this was not necessarily the sign of strength that it implies...


The labored and prolonged death of the copper empire had been telegraphed years ahead of time. By the end of the Second World War the writing was on the wall, and the next 30 years was nothing but an exasperated epitaph. By feeding off the remains of less fortunate mines, the great C&H had managed to outlast them all. But even its time would come. All of the “last great hopes” C&H poured desperate funds into–Gratiot, Kingston, Centennial, Ahmeek–would only delay the inevitable. With the 1968 labor strike C&H gave up the fight. It was over; the great copper empire was dead.

The year 1968 signaled the final death knell of the once illustrious copper mining industry in Michigan. By that point only the big, reliable mines owned by the big companies were still operating–such as the Quincy Mine's #2 shaft, the Calumet & Hecla's Osceola Mine #13, and Centennial #6. The Champion #4 had shut down in 1967. 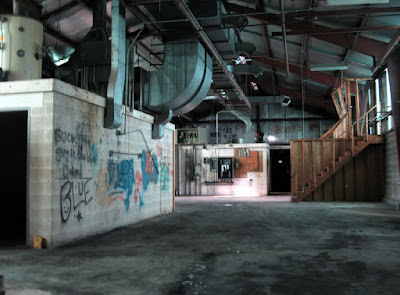 But mounting operational expenses stemming from mining at extreme depths, as well as the labor problems put the final nail in the coffin, and copper mining ended in Michigan after about 125 years. Only the White Pine Mine in Ontonagon County remained open, but it subsisted off of chemical mining as opposed to digging for native deposits. 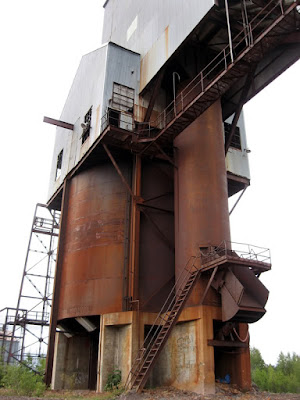 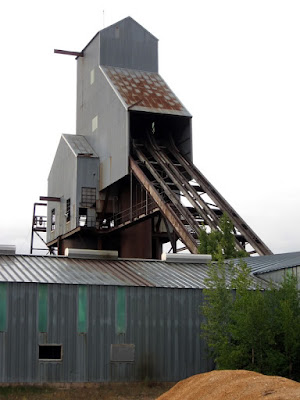 This tall structure is called the headframe or rockhouse, because it is at the head of the hoist system for the cables that pulls men and ore from the mine, and because it sorts the loads of poor-rock from the loads of valuable ore, and dispenses them into freight cars on a railroad track below. 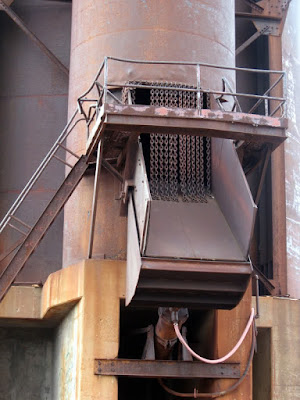 Poor rock would have clattered out of the chute seen above, while copper ore would be dispensed from the chutes in the next photo, so that it could be sent on its journey to the stamp mill where it could be refined for smelting: 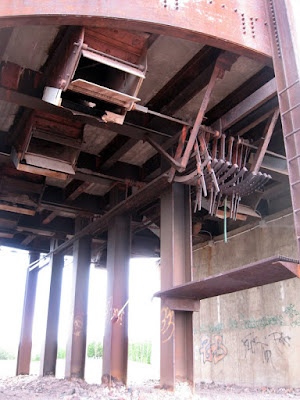 Another view from a catwalk, showing the angle of the skip-road heading down into the shaft house: 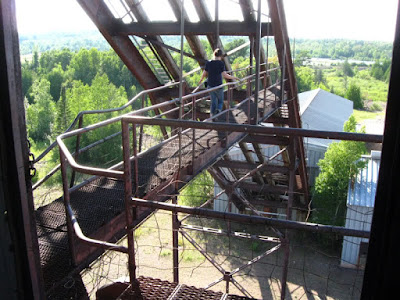 Surprisingly, parts of the headframe are made of wood–relatively new-looking wood: 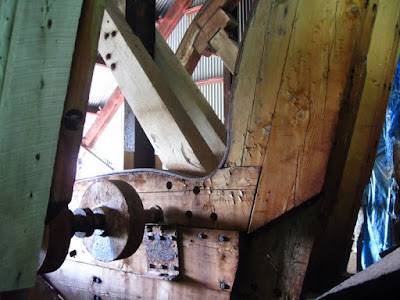 This machine was part of the rock crusher, I would guess: 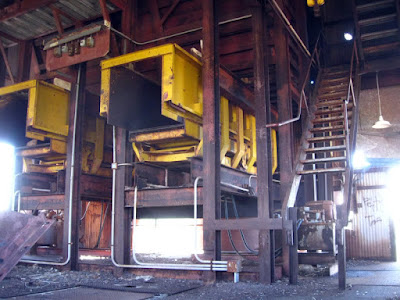 What happened in 1968 to precipitate the death of copper mining in the Keweenaw was that the men of the Kingston Mine walked off the job on May 10th, regarding a safety issue with a man-cage after a man was injured. Apparently the rest of their brethren at other Calumet & Hecla mines also stood in solidarity with their move, and went on strike as well. They also wanted equal pay to the miners at the White Pine Mine. 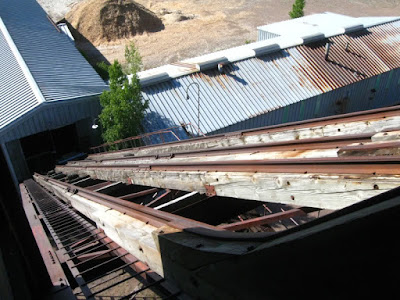 According to a paper by Brendon Pelto of Michigan Tech, most people attribute the death of copper mining in Michigan to the fact that the copper simply "ran out," but this isn't necessarily true. The copper was still down there, but it was a combination of mounting operating expenses to extract it, the aforementioned nine-month labor strike, and the fact that C&H had recently been bought out by Universal Oil Products (which was not particularly interested in copper mining, or the livelihood of the Keweenaw–but rather C&H's more lucrative Detroit holding, Wolverine Tube Co., which I have featured here before in an older post). It was all three of these factors that contributed to bringing about the death of the Copper Country. 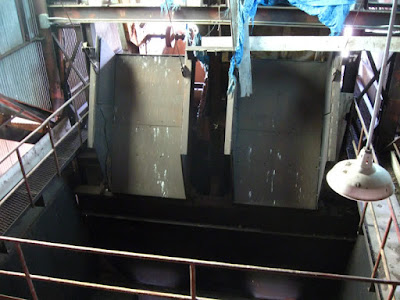 According to their numbers, Universal Oil saw the C&H mines as only marginally profitable to start with, and since Universal received about 80% of the copper they needed from sources outside of Michigan anyway, when this labor dispute cropped up they simply shut down all of the C&H mines across the board, bringing an ignominious end to the once-great "Red Metal Empire" in one fell swoop. The Keweenaw metropolis never recovered from the loss of its core industry and has basically been a ghost town ever since, but Universal Oil still owns Wolverine Tube to this day, Pelto writes. 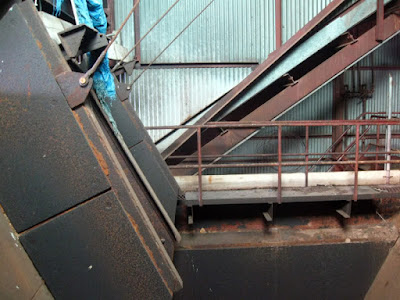 According to historian Lawrence J. Molloy, the Centennial #6 shaft was "dewatered" in the mid-1970s as part of a project with the curiously-titled Homestake Mining Co. That is, the groundwater was pumped out so they could start working again, but this is as far as it went before the project was abandoned. Based on their timing, one might not be too far off to guess that there were plans to reopen this mine in time to rename it the "Bicentennial"... 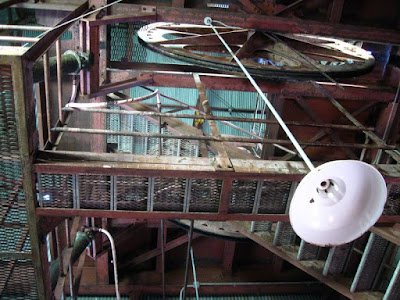 These massive pulleys once held the same cables that ran the trams in and out of the mine.
Mike Forgrave notes that the pulleys are actually called "sheaves." 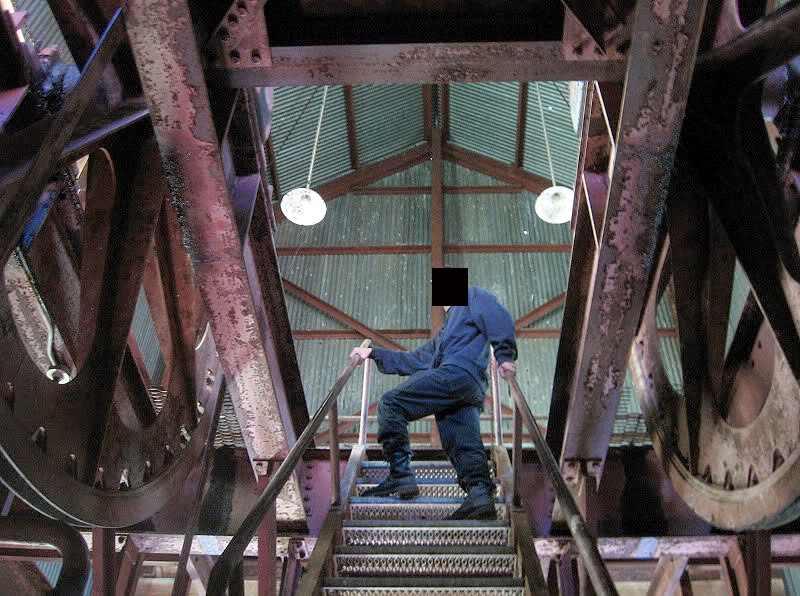 Climbing a small utility ladder that led up through the roof at the very top, I found quite a view...

Looking back down inside from the roof hatch: Gazing north, over the rooftops of Centennial, with the cliffs of the Keweenaw in the distance... 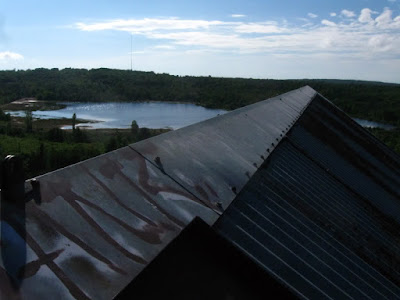 Overall, despite the incredible and insurmountable loss of industrial capital that the fall of the Michigan Copper Empire represented, I think it has been a net gain on the whole; now at least the pollution-scarred landscape that mining left in its wake has begun to heal, the decimated forests have grown back, and the Keweenaw enjoys a tourism business that it otherwise would not have had if it were still a smokestack-riddled industrial hell.

Email ThisBlogThis!Share to TwitterShare to FacebookShare to Pinterest
Labels: Centennial Mine #6, Houghton County