Mining in the Clouds

June, 2011. This post has been split off from an older episode.

I woke up before dawn in the western Upper Peninsula. I figured that since I was so close to the Porcupine Mountains, why not go up to Lake of the Clouds and watch the sun rise from the escarpment? That way I could also check out a couple other quick things such as Meads Mine, which lies directly on the roadside of M-107 overlooking Lake Superior: 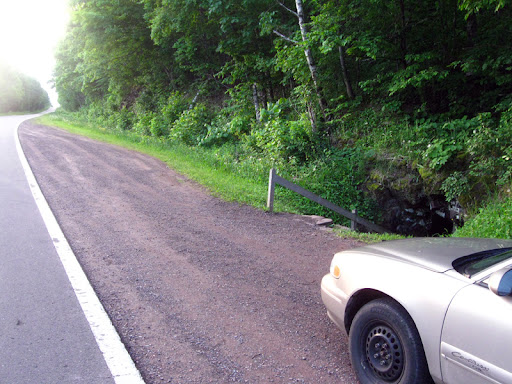 The Meads Mine is a short adit that was sunk 1,000 feet into the mountain from 1928-1929, on what had formerly been the Carp Lake Mine's holdings, but it never found any deposits. 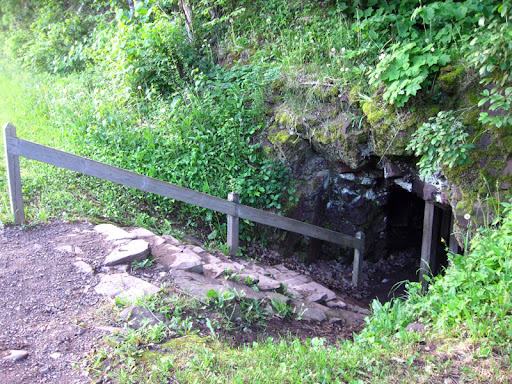 The reason you have to go down these stairs to get to the opening is because when the road was built in front of it, it raised the grade level of the ground up by several feet. 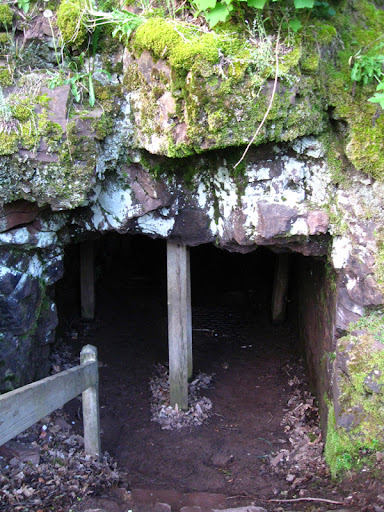 Today Meads Mine is actually maintained as a roadside exhibit and you can go into it, but it is blocked off about 20 yards in: 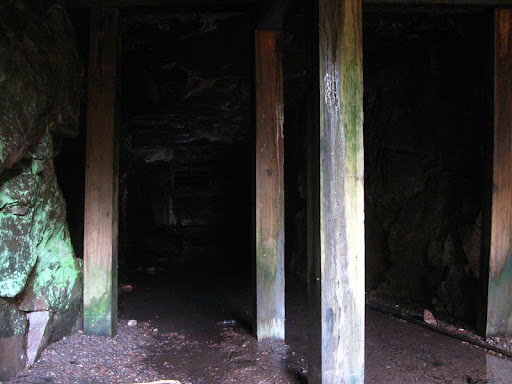 The bulkhead at the end of the adit was holding back about three feet of water, which trickled out through this grate, pooling up to several inches deep on the floor: 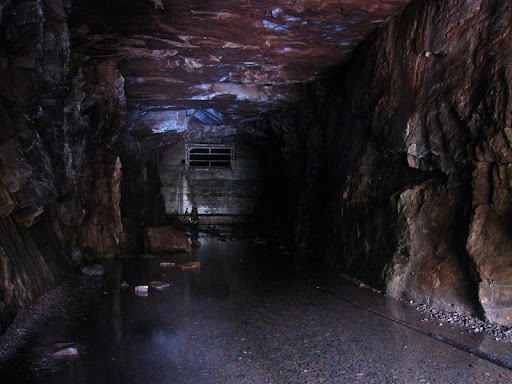 There were about 40 separate attempts at copper mining here in the “Porkies,” none of which were very successful. 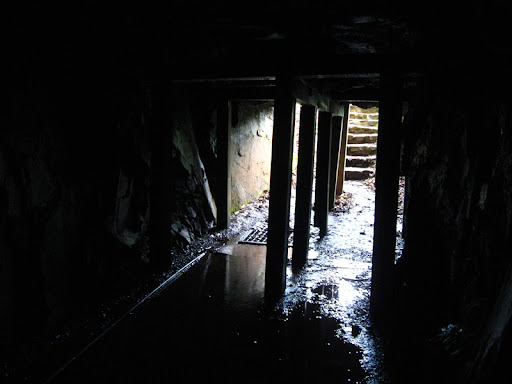 There was also a silver rush here on the east end of the mountain range, but it too was short lived and unsuccessful. 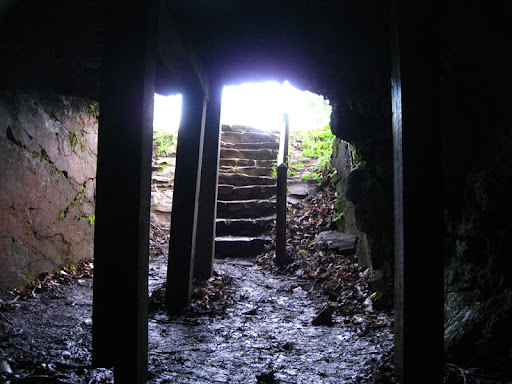 This picnic table sat atop the tailings pile of the Meads Mine, a deposit of finely crushed waste rock expelled from the mine: 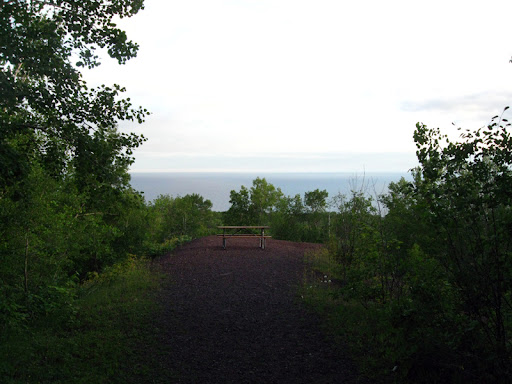 I continued up the back of the Porcupine Mountains and reached Lake of the Clouds--which is considered one of Michigan’s most scenic spots. It is also known for being the highest lake above sea level in the state. 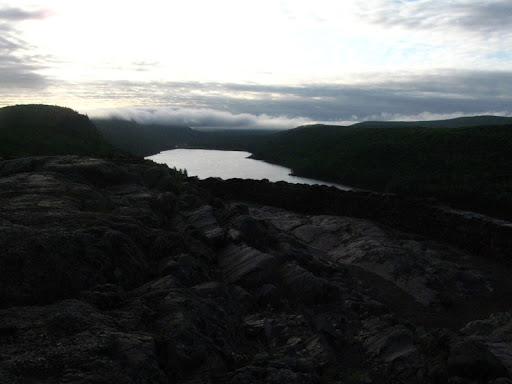 Despite its idyllic nature, Lake of the Clouds did not always have such a tourist-friendly name. It was originally called Carp Lake--which is how the Carp Lake Mine got its name. The panorama this morning was gorgeous…. 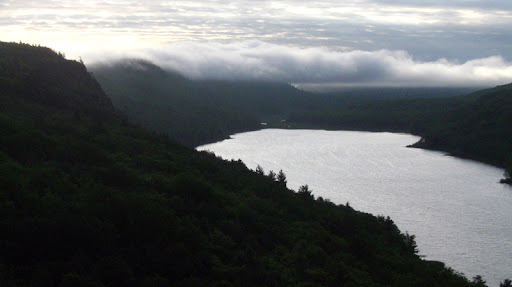 Looking west, you can see the angle of the strata tipping up from below the Earth's crust…there's copper in them thar hills: 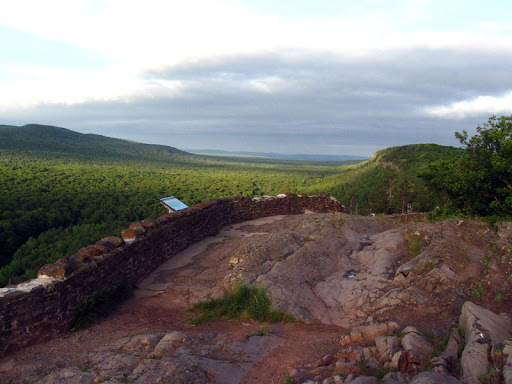 I decided that while I was here in the Porkies I should also seek out the ruins of the only remaining Cornish stamp mill left in Michigan, once part of the Carp Lake Mine. A Cornish stamp is a relic of Steam Age technology, hearkening back to a golden era in American pioneering history when man and machine sought to dominate mother nature by brute force, spinning gears, and clanking metal.

I would have to do some serious hiking in order to reach it however, and it lay on a slope deep in the sheltering woods well off of the main trail, but luckily it was not too far from where I was. This would be a very steep hike though. It was somewhere on the side of this secluded slope, just down from Cuyahoga Peak: 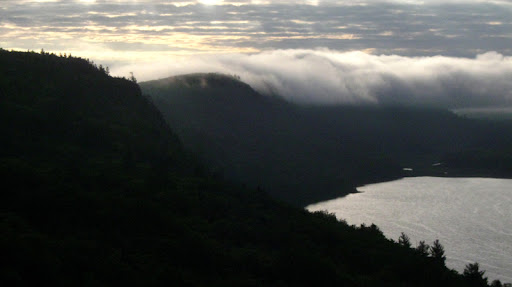 I got my small short-excursion army backpack from the car, filled it with essentials, and memorized the directions I would need to follow to reach this century-forgotten juggernaut of iron (you know you might be a serious explorer when you have different backpacks for different applications, heh). Supposedly the hike would take at least 45 minutes to an hour to get there.

Everything went fairly smoothly, I found the landmarks I was supposed to find, but when I started descending into the valley the mosquitoes came up at me with a ferocity. It was still technically bug season here in the Yoopee, so I came prepared with DEET and a head net. I was more concerned about the evil black flies, though I luckily did not see any here. Eventually I came across what looked undoubtedly to be tailings piles from long ago, meaning I was close to a mine somewhere: 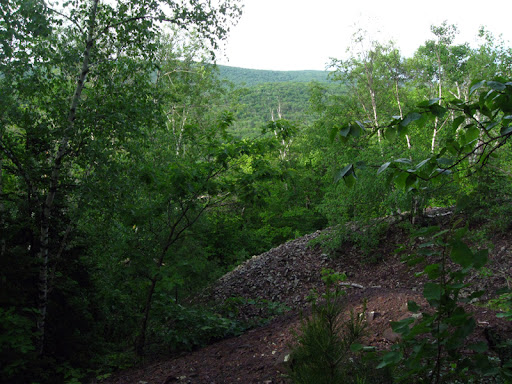 The Carp Lake Mine started on this slope in 1858, and it was that mine's stamp mill I sought. The mine closed by 1865 however, so its machinery has lain silent with leaves slowly falling onto it for many, many autumns.

Finally, I found it: 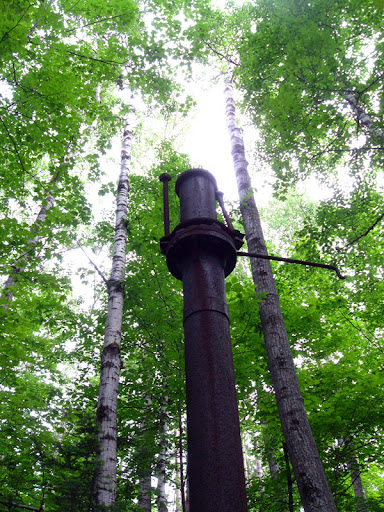 Tilting dramatically up out of the forest floor in scattered pieces, the half-buried stamp had taken on quite a sleepy repose. 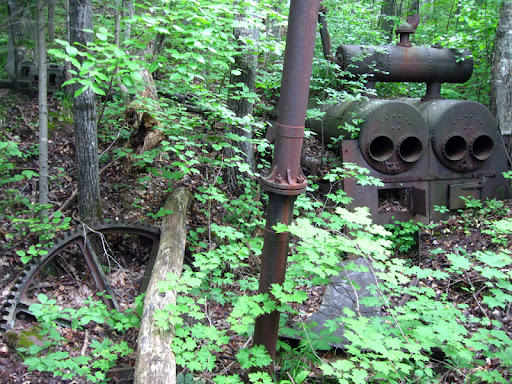 I was in awe of how anachronistic this crazy scene was…what a relic, yet so well preserved! It had apparently been sitting here abandoned since the Civil War. The hands of time had rusted over just as much as this steam-driven hulk before me. 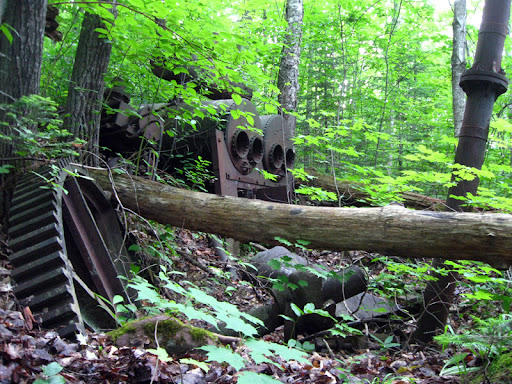 Basically what you’re looking at is a boiler-powered apparatus that milled copper ore into finer consistency for smelting, via the use of giant weighted iron hammers that lifted and dropped in series, driven by an assemblage of gears, cams, and tappets. Imagine it to be sort of like a giant music box. 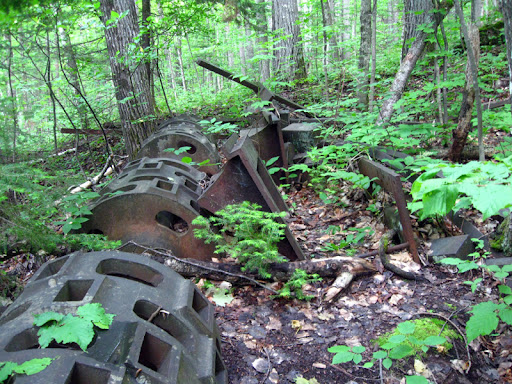 It is truly a gracefully primitive invention…basically adopted from the same exact technology that the ancients used to use to mill things, but now made of metal instead of wood, and powered by a steam engine instead of a waterwheel. 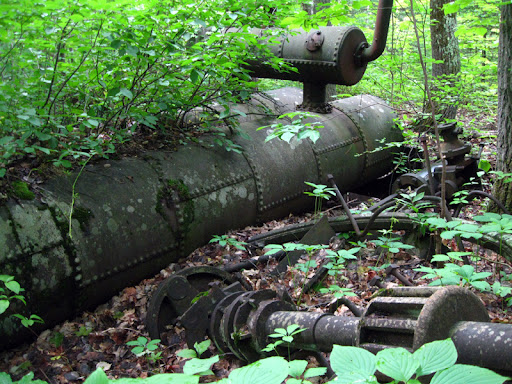 According to Lawrence J. Molloy, the Carp Lake Mine had dug many adits up the hill in this area, though none were readily visible to me. According to Mindat, there were two shafts, and after the mine closed in 1867 it was worked on tribute until 1894, but this mill was probably already out of use by that point. I'm guessing ore may have been shipped to another more modern stamp mill by that time. 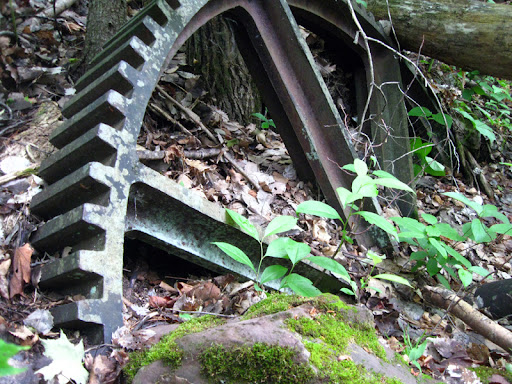 Here’s some of the hammer rods: An actual stamp head, found detached from its rod: 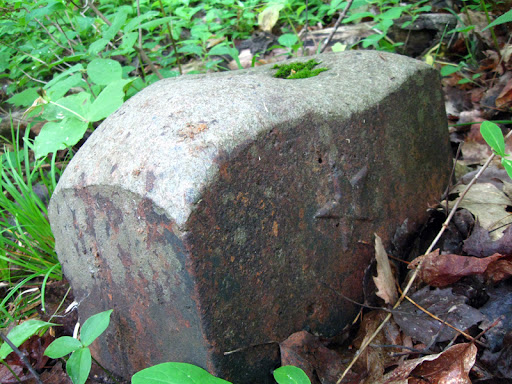 I was getting attacked pretty hard by the voracious mosquitoes, and was driven out of here after enduring it just long enough to get these photos. 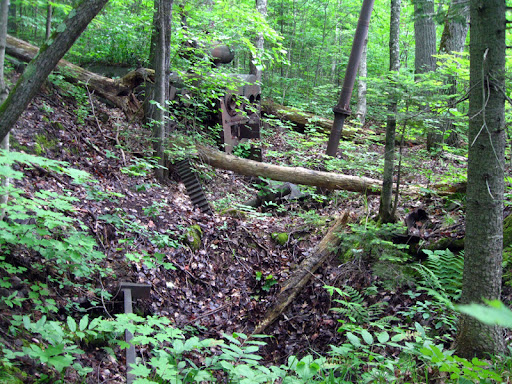 On the way back to the trail I found an old wheel and axle to a skip cart: 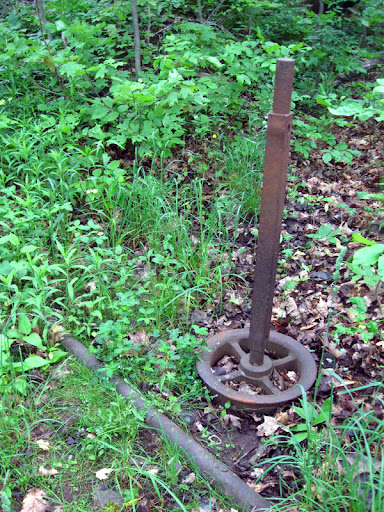 There are the remains of a Cornish stamp mill at the Cliff Mine, and at the Norwich Mine, both of which I have explored in previous posts, but neither of those has any workings left intact. In fact this might be the only place in the world where you can see an original Cornish stamp mill still in-situ.

There are historic photos of a working Cornish stamp at cliffmine.wordpress.com.