"Piles of Old Iron" Along the Potomac

The Atwater district of Detroit's lower east side has always been a favorite area of mine for finding decrepit old industrial hulks to check out. Before it was called Atwater however, this area was derisively known as "The Potomac," according to historian Robert Conot. Between the waterfront and "genteel" Jefferson Avenue where Detroit's elites built their mansions in the 1860s, along Franklin and Atwater Street east of Brush, the railroad "created a reeking slum" here, Conot wrote. Plagued by the smog from steamships, locomotives, and factories, "it was a district of unpainted and blackened wooden buildings," which included disreputable hotels, whorehouses, stables, opium dens, and overcrowded tenements. Various filth and manure gave the area a pungent aroma, and the streets were filled with a throng of peddlers, beggars, prostitutes, cripples, children, and swine. 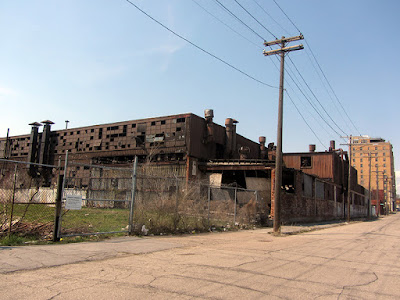 "It was a district where no respectable citizen would venture," into which the newly-formed Detroit Police rarely patrolled, and in which violence and death were so common as to rival Detroit's latter day reputation as the Murder Capitol. Hence the cynical nickname "The Potomac," which was derived from a satirical Civil War ditty that went a little something like this:


"All quiet along the Potomac," they say,
Except now and then a stray picket
Is shot, as he walks on his beat, to and fro,
By a rifleman hid in the thicket.

During the Civil War Detroit was full of working class men and women who had had quite enough of Washington D.C.'s bluster of glory and patriotism, and of the upper class who could buy their sons' way out of the draft by paying a poor bastard to go in their place. Although at the war's outset Detroit had given generously of its sons to the Union cause, by 1863 the constant news of futile bloodbaths and the strains of industrialization that the war laid upon Detroit's populace reduced morale sharply. Finally, when it was announced that conscription would be instituted, Detroit's Irish revolted and burned the black neighborhood...although the Irish bitterly resented conscription (having fought Mother England's wars for her), Detroit's 1863 Riot was actually precipitated by a racist, anti-Negro sentiment. 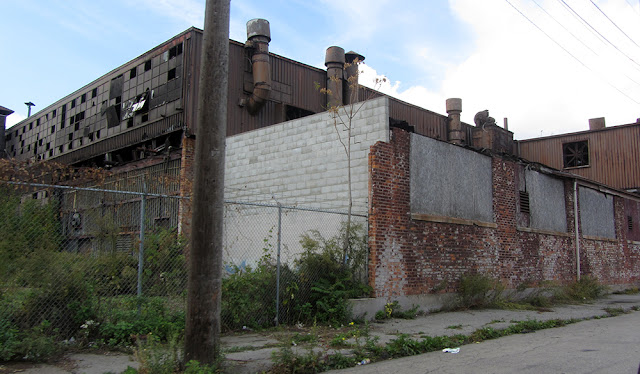 Sailors would "tie up" here for the winter, "or until their money was spent, when some would finish the idle months in the house of correction." Once Prohibition came the character of this area changed again: from brawling longshoremen, to bootleggers and gangsters. The Hiram Walker Distillery was directly on the opposite side of the river in Canada, and the already heavy maritime traffic here provided a perfect screen for rum-running operations.

Atwater is nothing like the "Potomac" today, although some of its buildings were probably standing back then. This one appears to be a foundry, but a sign on the fence said the property was owned by Daimler-Chrysler. 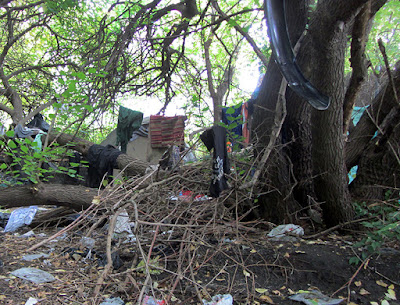 Well, I suppose one thing here might still be like the old Potomac...in a patch of dense trees and overgrowth around back, I stumbled across the encampment of a local member of Detroit's homeless population.

There was also a discarded boat...big surprise. According to Google Maps, this spot is across the street from the Detroit Hydroplane Museum, which might explain why this fiberglass hull looks like it goes to something a little racier than your average dinghy: 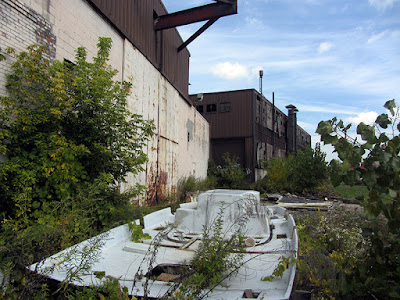 Peeking my head in through a window, I was treated to a very odd scene—for what I had thought was an abandoned building. Was this space used for storage, or for rave parties? 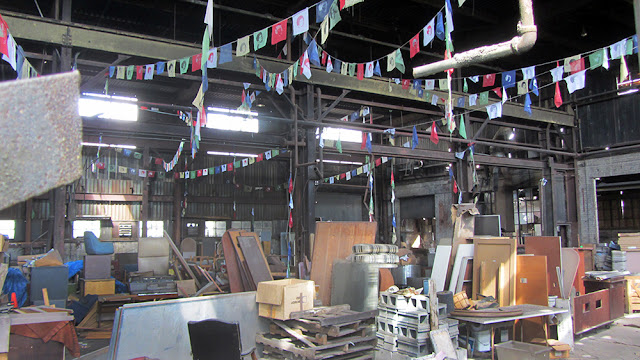 I hopped down from the window and made my way in the other side of the building.

The Sanborn map of 1922 shows this property as the Trussed Concrete Steel Co. "steel storage ware house"...although it looks like the building had not yet taken on its present shape at that time. Truscon, as it is commonly known, was founded by Julius Kahn, and was the company that manufactured the metal reinforcing pieces that went into his brother Albert Kahn's reinforced concrete buildings, such as the Packard Plant. 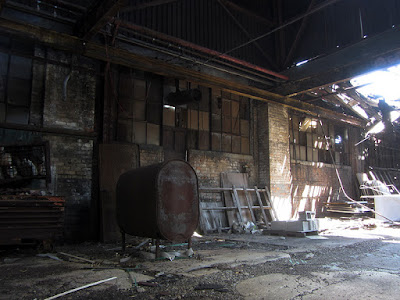 Julius's contributions to Albert Kahn's revolutionary architectural techniques are usually overlooked. It was Julius who designed, tested, and patented the "Kahn System" in 1902, of adding steel rods to strengthen concrete in the shape of a "trussed beam," which was the thing that made Albert's automotive factories so revolutionary. Truscon also provided structural engineering services for the Kahn System. 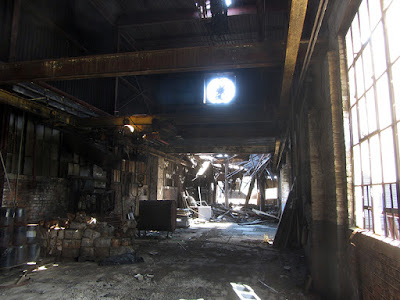 a 1917 advertisement for the company in the Michigan Manufacturer & Financial Record takes the reader on a tour of a modern Detroit automobile plant, marveling at all of its cleanliness and efficiency, all thanks to the open spaces, good lighting, ventilation, strength, and fireproofing provided by the Kahn System of construction, which utilized items manufactured by Truscon.

They produced every kind of need for reinforced concrete "in all its phases," plus steel sash windows "of every type," metal lath for plaster and stucco, pressed steel joints and studs, pre-fab panels for all-steel buildings, etc.:

The above ad includes photos of Michigan Central Terminal, the Boulevard Building, the Detroit Athletic Club, the (old) Free Press Building, automobile factories such as Ford, Packard, Dodge, Hudson, Continental, and a couple banks. It illustrates that even buildings (such as Michigan Central Terminal) that were not designed by Albert Kahn often still incorporated Truscon products.

The Truscon company had its offices in the Trussed Concrete Building downtown. According to the Detroit Public Library's website, it was "the first office building of concrete construction in Detroit," located on the northeast corner of Lafayette and Washington (it was demolished in 1957). 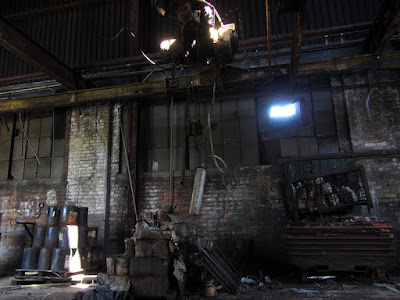 It also states that Truscon's main plant was in Youngstown, a major steel-making city in Ohio. 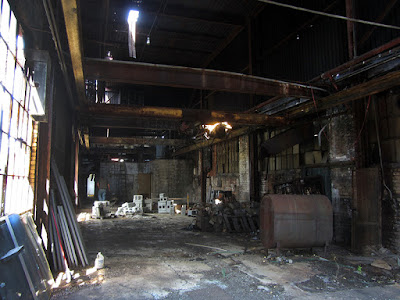 Here is a help-wanted ad from September, 1918, which refers to this building as a warehouse for Truscon:

An April, 1927 ad emphasizes Truscon's window sashes were not just for giant factories, they could be made for homes too, meaning that they are probably installed in houses across the Metro-Detroit region: 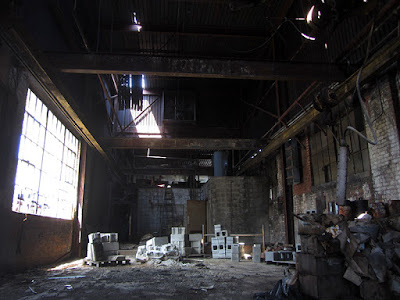 An issue of the trade publication Iron Age from 1925 indicates that the W.H. Anderson Tool & Supply Co. had taken over this plant from Truscon by that time. A 1927 issue of Michigan Roads and Construction shows that the company specialized in making road-building machinery and equipment. 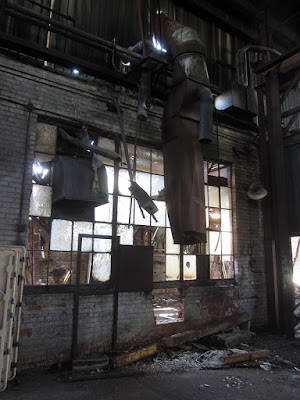 Taking a glance at my copy of Clarence M. Burton's The History of Wayne County, the W.H. Anderson Tool & Supply Co. was founded by William Henry Anderson, a Scotsman who settled here during Detroit's "pioneer epoch." He later worked in the railroad car shops of Dean & Eaton in the 1860s, and by the 1870s had set up shop at Mullett & Rivard repairing masons' and stonecutters' tools.

Anderson moved and expanded several times, and around 1890 he built a factory at Gouin & St. Aubin so as to have railroad shipment access. He built a drop-forging shop in 1904, but quit that and formed the W.H. Anderson Tool & Supply Co. with his son in 1906. He was a highly respected local Freemason and St. Andrew's Society member by the time of his death in 1914. 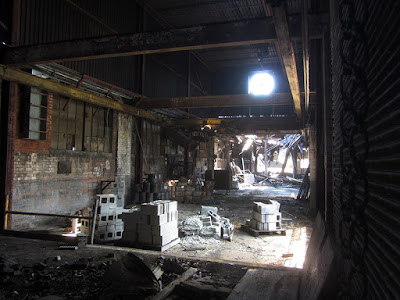 Looking back slightly further into the past, the c.1897 Sanborn map shows the exact same structures here as were seen on the c.1921 map, but it was occupied by the R.L. Ginsburg & Son, which dealt in railroad supplies and scrap iron. The map labelled a "scrap iron shed," "piles of old iron," "metal shears" etc. The plant had no less than two railroad spurs directly off the Belt Line RR, which crossed each other in the center of what would now be this foundry.

A blurb in The Waste Trade Journal for 1918 said that R.L. Ginsburg & Son merged that year with The Great Iron and Metal Co. and would carry on as the "Grant Iron and Metal Co., Inc." with offices at the Dime Bank Building; its company officers would be R.S. Grant as president, and Ben Ginsburg as vice president. I think it is safe to assume that Truscon also moved into this building at that time. 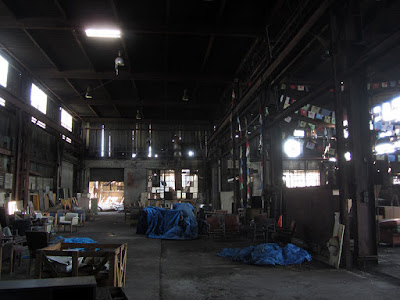 The Ginsburgs were a Jewish family who got their start in the Detroit scrap metal business in 1881. Bernard Ginsburg joined his father's business in 1891, and went on to become one of Detroit's leading citizens. He was doing so well by 1898 that he was able to hire Albert Kahn (and George Nettleton) to design him a fine house at 236 Adelaide, in Brush Park (during an era when most of Detroit's prestigious neighborhoods had restrictive covenants excluding Jews).

A man of many parts, Bernard Ginsburg served at various times as vice-president of the Detroit Auto Specialty Co., as director of the New York Car Wheel Co., as Detroit Public Lighting Commissioner, as a member of the Public Library Board, as a member of the Detroit Board of Commerce, as a director of the Provident Loan Society, as a president of the United Jewish Charities of Detroit, and as vice-president of the National Conference of Jewish Charities. He was instrumental in founding the Detroit Public Library's main branch, and the Ginsburg Branch Library (which I explored in an older post), was named after him. 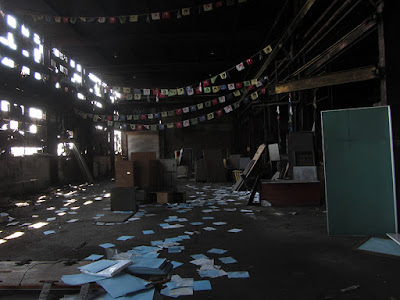 Well, here I was, back in the mysterious room with all the crazy flags... 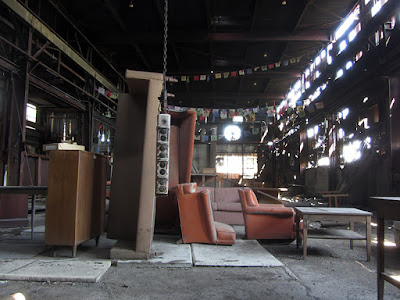 Clearly, this building had been heavily modified since the days when the Ginsburgs, Andersons, or Truscon had used it...perhaps even Truscon themselves did the additions to this structure. 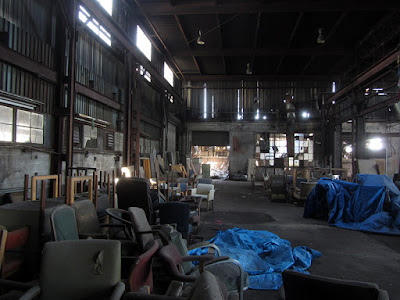 I suppose this large room could have been added by Truscon after 1921 for storing large steel stock items, or maybe even as a heavy equipment assembly building by the W.H. Anderson Co. after 1925. Just as likely it could have been added even later by some other firm that I haven't been able to turn up in my research. Again, my initial gut feeling was that it had been a foundry. 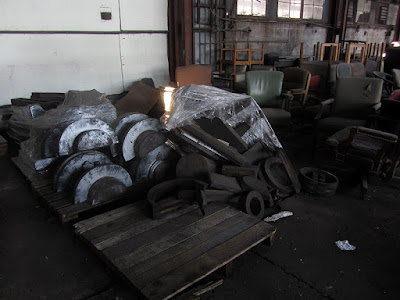 Taking another look back at the 1897 Sanborn map, it also shows Crescent Brass & Iron Works across street from this plant, while adjacent to it is the McClure Kelsey & Co. lumber yard. Ideal Mfg. Co., the Detroit Planing Mill, and the historic Lauhoff Bros. Machine were also nearby; foundries, pattern works, machine shops, rolling mills, and the like abounded in this immediate area.

Along the riverfront one block from here a shipyard, an ice house, a sawmill, and numerous major lumber yards were clustered (such as the Detroit Lumber Co.), each having its own boat slip. A surprising number of houses and other residential dwellings still littered the spaces between these factories back in 1897. 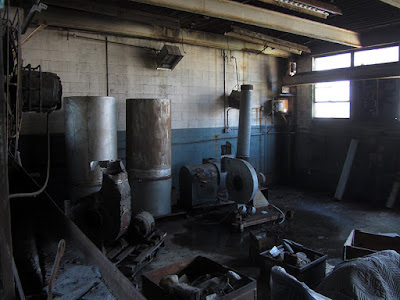 I've tried to find out what this building was used for after Anderson Tool Co. moved out in 1930, but from the few Polk's city directories I've been able to access, it appears to have been vacant from 1930 to at least 1941. At some point, Chrysler came to own the property.

Here's a view showing just how close we are to the Detroit River, where McMillan State Park and Marina is now seen, instead of the mess of mills and foundries of 120 years ago: 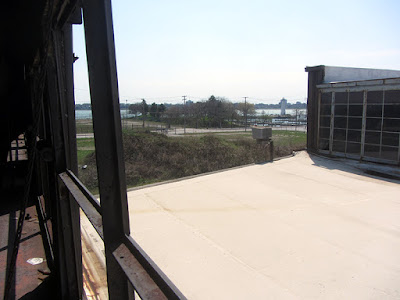 The RenCen barely pokes above the roof monitors... 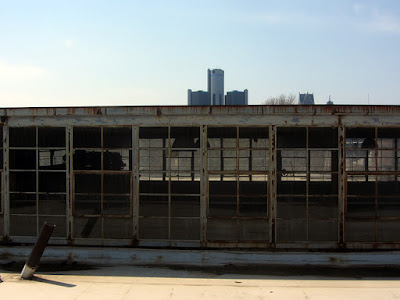 ...seems like it'd be a decent place to view the fireworks from. 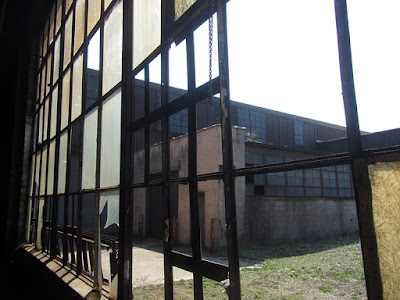 Are you old enough to remember actually punching a time-card at work? 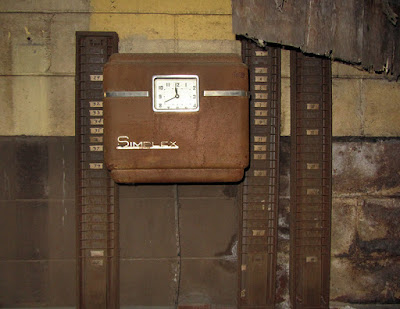 A strange connecting space between the older and newer sections, with modern stairs: 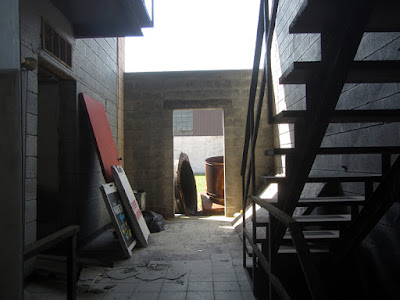 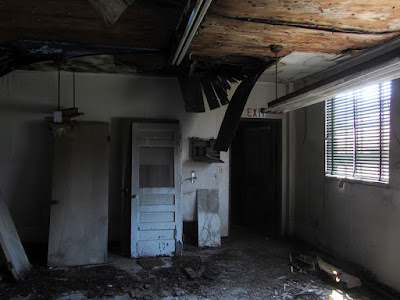 Looking out a window, it seems that a smokestack has fallen off the building... 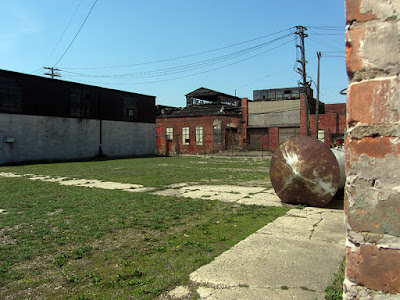 Here are some other posts of mine dealing with the Atwater area:
Detroit Screw Works 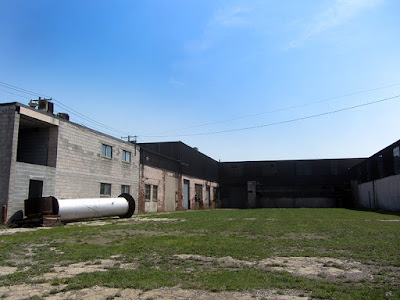