My friend Chisel's parents have a small piece of property up in Cheboygan County, which is near the northern tip of the Mitten, that they go to every year on 4th of July weekend. The actual village they are in was once named Alverno, though that town ceased to exist many decades ago and reverted to just being part of Benton Twp. It's right on the Black River, which connects to the system of three major inland lakes: Burt Lake, Mullett Lake, and Black Lake. If you follow the Cheboygan River north (and pass through a small lock), you can also get to the open waters of Lake Huron. Click here for map.

I figured it would be a good excuse to utilize the ferry service from nearby Cheboygan to Bois Blanc Island. Why not check off another island (even though I had only just gotten back from my Beaver Island trip)? I had read somewhere that Bois Blanc Island's northwestern tip, Limekiln Point, was the site of some lime kiln ruins dating back to the 1700s. Upon further research I learned that these kilns were built to utilize the high quality natural lime deposits in that particular area as mortar during the construction of Fort Mackinac, two islands over. 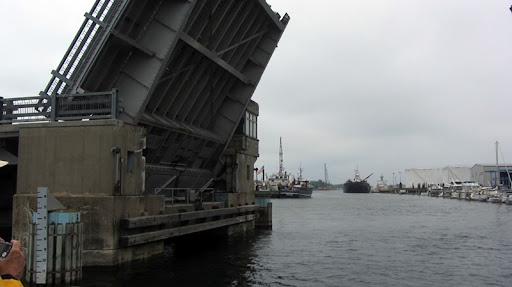 Bois Blanc Island's Anishinaabe name was "Wigobiminiss," which means the same as its French name, "white wood," referring to birch trees (there is also an island in the Detroit River of the same name, "Bob-Lo" Island for short).  The Ojibwe ceded the island to the U.S. government as part of the Treaty of Greenville, in 1795. Today Bois Blanc is pretty empty, and only about 70 people live there. There are roads and an airstrip, but that's pretty much it.

Unfortunately due to the lack of much to see or do on the island, not many people ever came here except the residents, meaning that while the pace of life here is relaxed, there is really no mechanism in place for sightseers who want to come visit the island. Luckily though, I did find out that there is a historical society for Bois Blanc Island, and that they have published a "tourism map," however crude, of the island's interesting features or landmarks. Touristy, historic Mackinac Island nearby is the major attraction of the region, drawing travelers by the thousands. Bois Blanc has come to be known to those who frequent it as the "poor man's Mackinac," where it is much cheaper to vacation, and the pace of life is much slower and quieter. 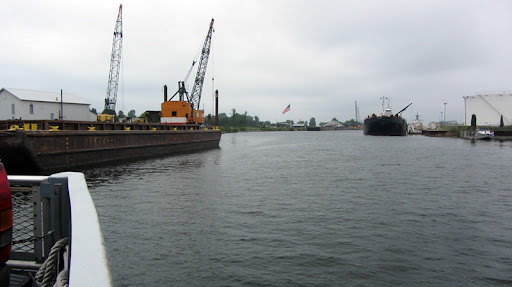 It was about this time that I came across a startling piece of information regarding the island's history somewhere online, which alleged that a cabin hidden deep in the woods of Bois Blanc had once been the hideout of none other than Public Enemy Number One, notorious Chicago gangster John Dillinger! 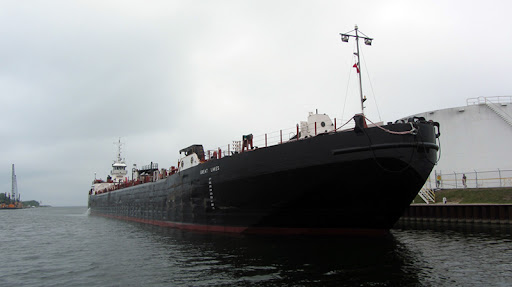 As the story goes, John Dillinger underwent plastic surgery in 1934 to disguise his identity and evade capture, and while he was recovering from this surgery he hid out for several months in a log cabin "somewhere in northern Michigan." Local tell maintains that this hideout was in fact situated on Bois Blanc Island itself, at the eastern extent of Twin Lake, where the ruins of three log cabins are still visible today.

That's a pretty crazy piece of history there, even if it is technically unverifiable. A website I later found also showed many pictures of other abandoned pieces of the past for us to find on the island. 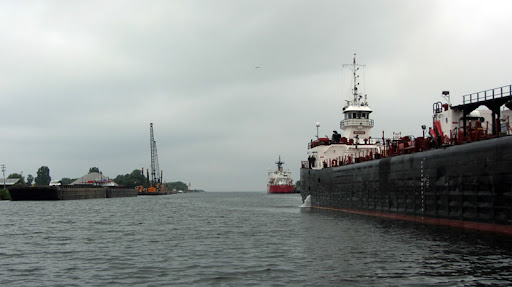 We took the ferry to the island first thing in the morning, with me riding in Chisel's car and his parents riding in their truck behind us. "Chisel" is a nickname by the way... 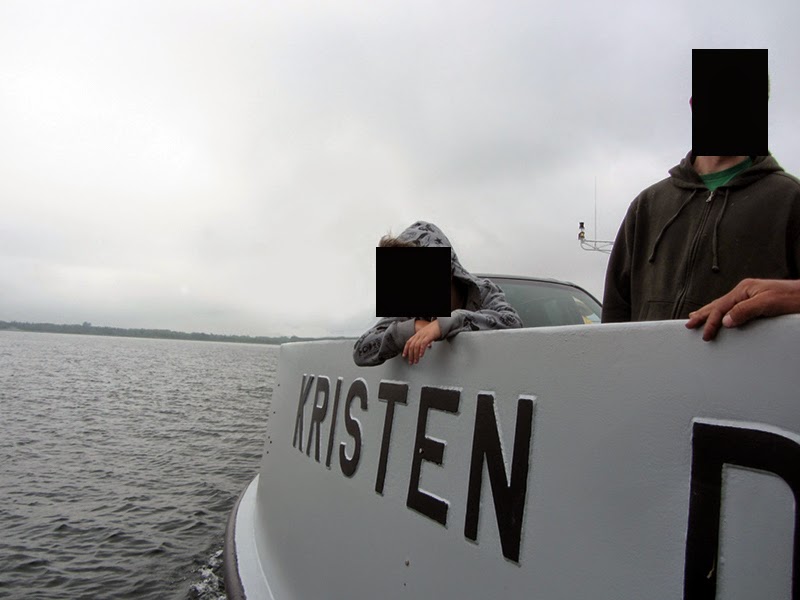 Before starting out on this trip I had looked up and emailed Betty, the lady in charge of the Bois Blanc Island Historical Society, asking her how to get one of their sightseeing maps, being that their open season was only July-August, meaning that they wouldn't be open until a day after we left. I arranged for her to leave a map taped to the door of their building, and in exchange I would leave a dollar taped in its place.

The weather had taken a turn for the shitty today, with grey skies and threats of rain, though the waters were uncannily as calm as if we were gliding across a bowl of gelatin. As we crossed the straits, we passed the Fourteen Foot Shoal Light: 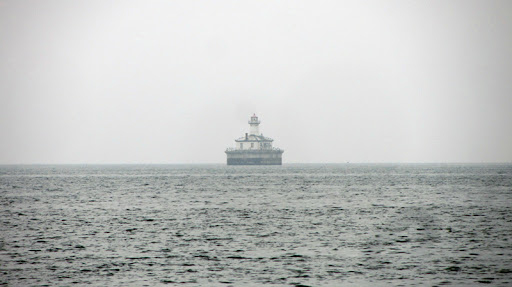 As we approached landfall, the skies showed signs of wanting to open up, and the biggest American flag I've ever seen greeted us at harbor. 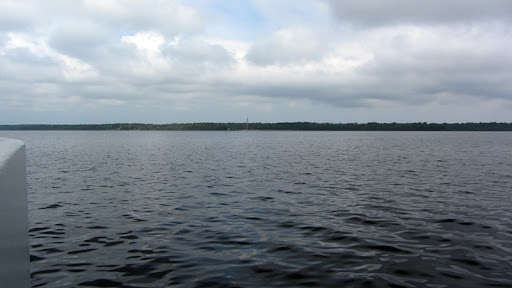 Once we were off the vessel, the first order of business was to locate the historical society so we could retrieve my map. I knew what the building looked like, but I was not certain where exactly it was. I figured that the town of Pointe Aux Pins was so small we wouldn't have any trouble finding it by cruising around. We ended up having to ask a guy at the fire station where it was. 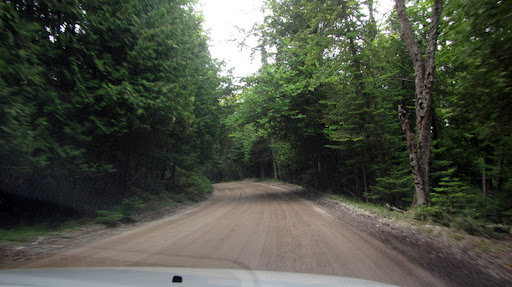 Sure enough, there was my map taped to the screen door, and once I had my dollar affixed in its place (Chisel found this highly amusing), we were off down the road. The first thing I wanted to hit was Limekiln Point, but what I didn't know was that Chisel's parents were on a tighter schedule than us, and were planning to be on the 4pm ferry back to the mainland, whereas we were taking the last ferry of the day at 7:45pm; had I known, I would have had us start there. 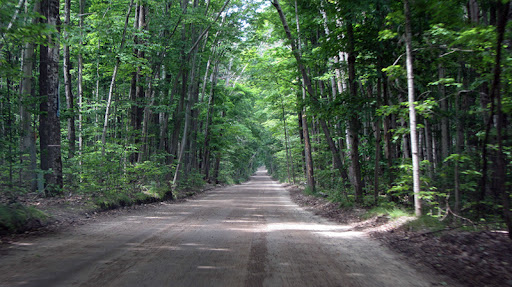 The road to Limekiln Point was very decent and mostly straight once we passed the airstrip. I was worried that the area of the point would be all private property, as on the aerial view I could see homes all along it, but I held out hope that there would be a piece of publicly accessible land that gave access to the water with some lime kiln ruins on it.

There were the remnants of an old dock that could be seen on aerial view extending from the point, and as far as I could figure that was where the kilns were located. I have since however learned from Betty at the historical society that the kilns are located on private property. 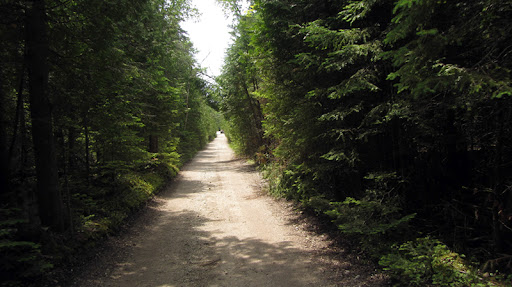 Once we got out there we accidentally went up someone's driveway, which gave us a great view of Round Island in the now almost tropical weather: 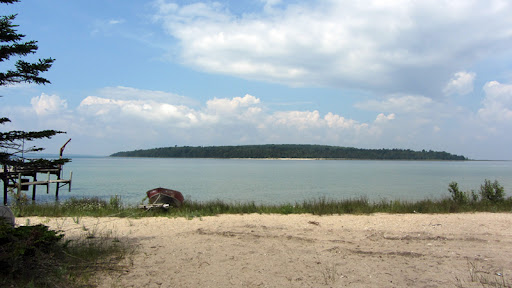 Round Island is a small, uninhabited wildlife refuge island situated between Bois Blanc and Mackinac Islands. In the winter the lake freezes over in the passage, and deer cross the ice bridge between them. 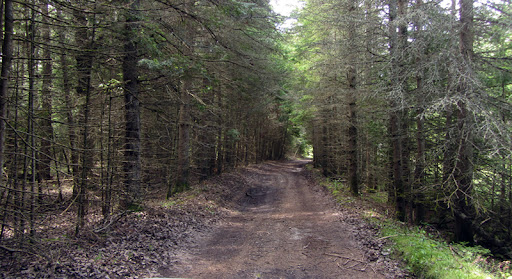 We turned around and soon located an open area nearby that looked like a place where people can park by the water, but once we got all the way up to it we could read a sign that said it was private property. Well, we had already parked so we weren't about to turn around again. Besides it seemed by the wording of the sign that the owner didn't mind people coming here to picnic just so long as they don't litter or camp.

I didn't see any evidence of lime kilns but we could see the Mackinac Bridge in the distance: 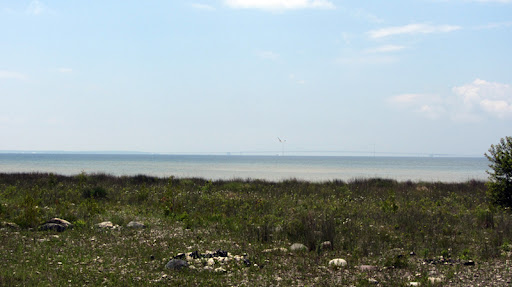 (The Mitten is on the left and the Yoopee is on the right.)

Another view of Round Island: 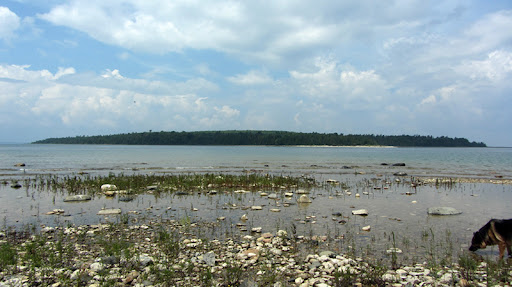 Frustrated, I began combing the area for signs of kiln ruins. I did not find any clues, though I did catch a glimpse of some shrapnel… 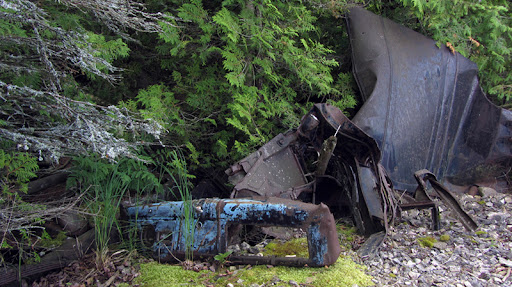 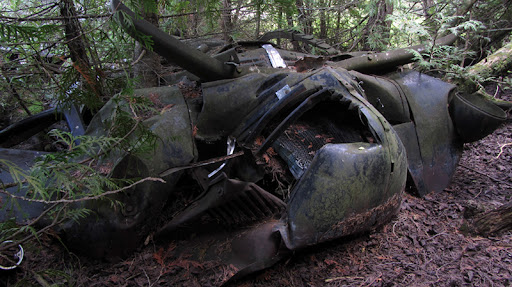 I couldn't really identify it, but I called the others over to show them my discovery. This thing had really been wrecked…pieces lay completely at random. 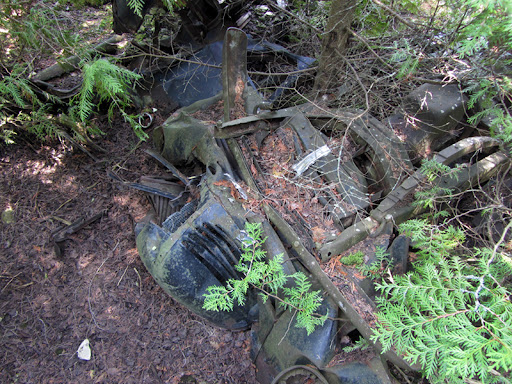 A couple friends of mine later postulated from these photos that it was a 1940 Dodge VC20 military truck. 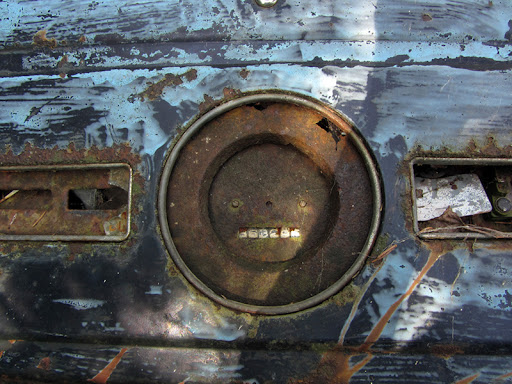 Having had our entertainment from this, we now moved onward and attempted to drive the North Shore Road around the northern shore of the island, but were turned back by rough conditions on the wrong road, which Chisel's car was unable to negotiate. His fenders were already coated in mud thanks to the narrower, more rustic trails we had been on since leaving the main road behind.

When I asked later, Betty told me the kiln ruins lay in the Juntunen Site, very close to Limekiln Point, which is an archaeological dig further down the road to the north. It was discovered in 1932 by a University of Michigan archaeologist, and also contained evidence of a Native American fishing camp that existed there between 800AD and 1400AD. University of Michigan returned in the 1960s to do more work, and the leader of those digs published a study that Betty has a copy of in her library. Among the artifacts found were burials, pottery shards, etc., but again this site is entirely on private land and can only be observed "from the road."
As it turns out, a reader named Tom Miller contacted me in 2022, saying that one of the kiln ruins lies on his brother's property. He sent me this photo of it, saying that there were originally a total of three lime kilns altogether in the area, but the whereabouts of the other two were unknown to him.