It would seem that John Dillinger was far from the only person to seek asylum at Bois Blanc Island…a look into its history reveals that it has served the role of hideout and refuge many times in the past. In my previous posts regarding Drummond Island, I talked about the little-known War of 1812, which was still going on exactly 200 years ago. McRae Bay was where the United States Navy under Commodore Sinclair (great-grandfather of novelist Upton Sinclair) had once sheltered before their fateful assault on British-held Fort Mackinac in August of 1814. 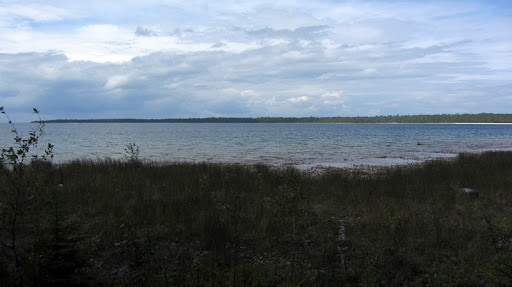 In 1880 it served again as a haven for a criminal at large, the alleged murderer Henry English, who had been on the lam from authorities in Pennsylvania. He was finally captured on Bois Blanc by Pinkerton agents, and taken back to Pennsylvania.

Our map told us that once Fire Tower Road hit McRae Bay, we would be at the road to the lighthouse on the point, but I knew the conditions of the road to the light were reported to be usually impassable by cars. We went as far as we could before being confronted by huge mud holes that halted our progress well short of our goal. Continuing on foot for the couple miles of woods that remained was out of the question with the young kids in tow. 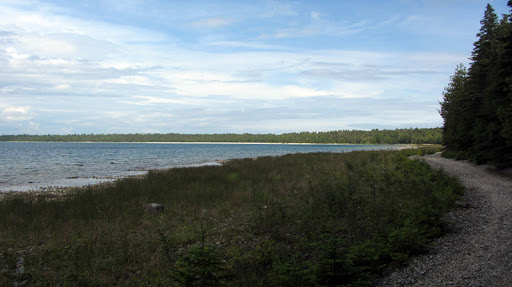 Luckily however there was a consolation prize for us to locate, the last remaining piece of an old sawmill--its old boiler--that once sat here sat at the foot of the bay just a few yards up from the stony shore. It was about a 1/4-mile hike from where our car sat stopped in the road. 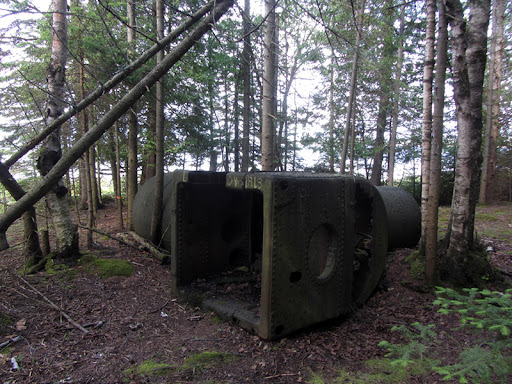 The sawmill had of course been surrounded by a shantytown of workers' housing, but we found no evidence of basement holes or foundations. 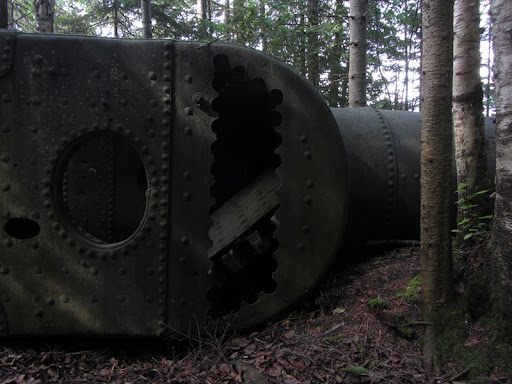 Laying on its side, the boiler was almost as big as a house. The beauty of islands is that the added expense of moving bulky items to and from them often cancels out any profit to be gained from anyone scrapping relics like this that would normally have been gobbled up long ago had they been on the mainland. So one is far more likely to find artifacts of the past on an island than anywhere else. 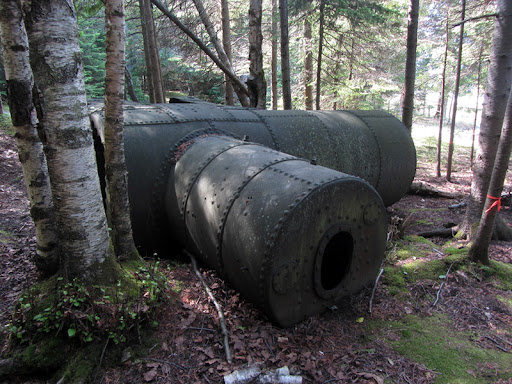 Another fascinating factoid about Bois Blanc's history is that it once was part of the plan to connect Michigan's two peninsulas with a bridge. The Mackinac Bridge we know today was for decades known as "the bridge that couldn't be built." Before it was finally completed in 1957 no one believed there would ever be a road between the Mitten and the Yoopee, that due to the size and fury of the Strait of Mackinac no man-made span could be engineered to conquer it. 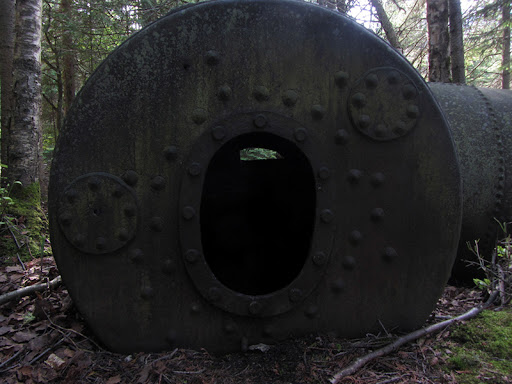 One of the plans that was considered for uniting the two land masses was to start a bridge going from the city of Cheboygan to Bois Blanc Island, then making short hops to Round Island, Mackinac Island, and then to the Upper Peninsula.  Somewhere on the eastern end of Bois Blanc, there is allegedly a benchmark made by surveyors as part of this plan for a four-part bridge. Had this more elaborate plan been carried to fruition, the character of these desolate islands would likely be very different than what it is today. 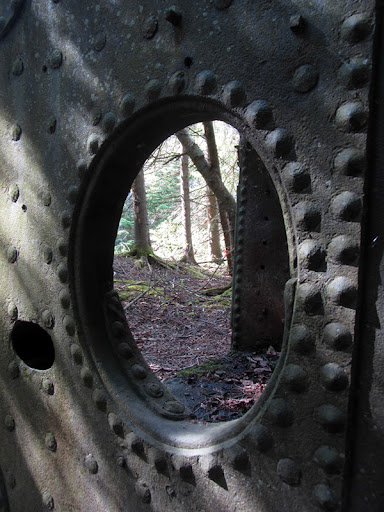 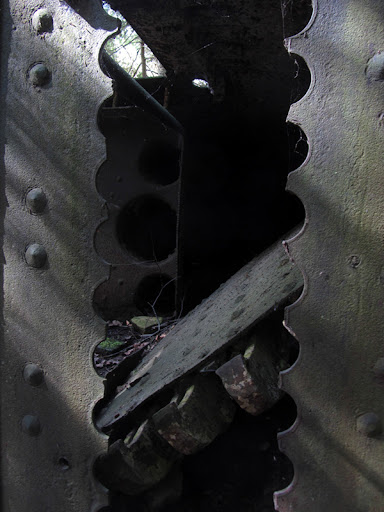 We sat at the T-intersection of Fire Tower Rd. and the road that ran along the shore. If we continued back in the opposite direction from the lighthouse, there was the old McRae cemetery somewhere in the woods up on the hill which looked kinda cool according to one old photo I had seen. It was basically a family plot of old headstones deep in a forest, dating as far back as the 1880s. From what I had gleaned it lay on the hillside just past the intersection where the terrain began to get really steep rising up from the shore. It was not marked on Betty's map but I felt pretty sure I knew the area it would be, from having studied it on Google Earth.

We drove down the rough, narrow road carefully, scanning for any potential leads. We passed many trails that looked promising, and I jumped out of the car to run up ahead to see whether they led anywhere. Sadly, I did not find any signs of a cemetery. We spent a good hour doing this. It is unfortunate that we did not have more time to spend on the island, because apparently not everything is very easy to find or get to. 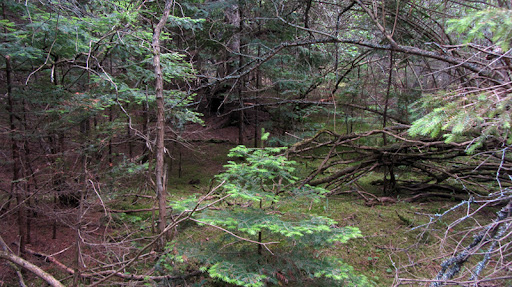 One of the trails I investigated on foot led to a dead end where I found lots of metal debris in a concentrated area, and a few depressions that might have been cellars at one time: 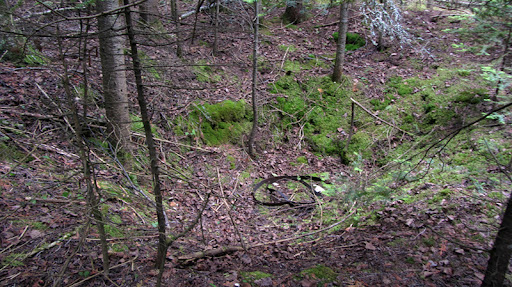 I also found a very old cartridge casing to a .38-55 Ballard, which is an old rifle round that used black powder: 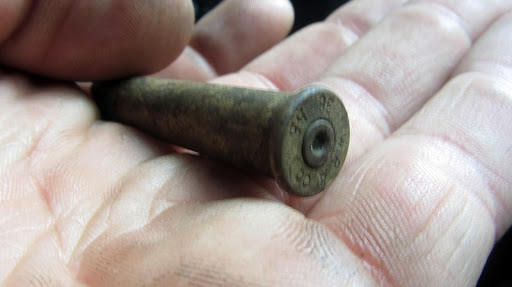 This cartridge was introduced in 1884, and discontinued in 1940. It has been reintroduced by Winchester in recent years for firearms nostalgia lovers and Cowboy Action Shooters, but as you can see this casing has been sitting for awhile. The .38-55 (bore diameter of .38-inch, holding 55 grains of powder) was popular amongst deer and black bear hunters because of its good knockdown power and fine accuracy out to 200 yards.

Finally we gave up on the cemetery and decided to head back down to the southern end of the island again. The cemetery, the lighthouse, the benchmark, the sawmill, the lime kilns…I have plenty of reasons to make another trip to Bois Blanc Island next year. On the way we actually looked for the ruined footings of the former fire tower itself, which give the road its name. We found them, much to our chagrin, directly on the side of the road across the street from the ruins of the Dillinger cabin again, and they were--to put it lightly--unspectacular at best: 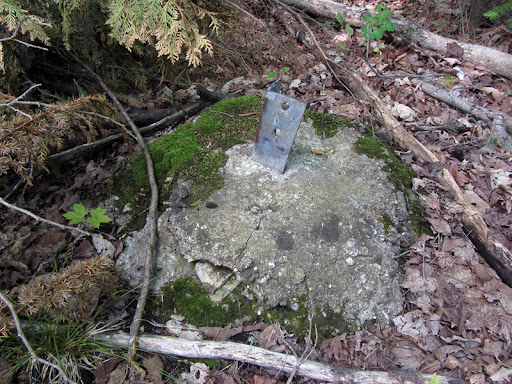 In fact I could hardly believe that they ever made fire towers this small--not only were the footings hardly larger than what you would make for a fencepost, but there was only three of them as opposed to the standard four-legged tower. The notes on Betty's map say that it was still 90 feet tall however, and was manned from 1920 to 1940, by conservation officer John Bible (hence Bible Road). Because there was no electric or telephone service until 1964, in order to report a fire he was forced to climb down the tower and drive to Pointe Aux Pins (said: "poin-oh-PINZ" for you non-Michiganders). 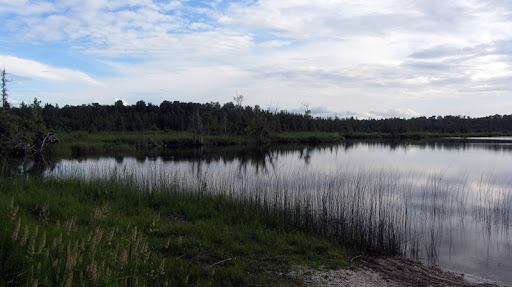 Chisel wanted to see Twin Lake, so we stopped there. 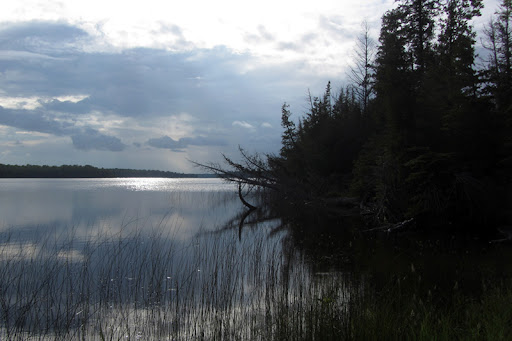 This placid body was ringed by very beautiful flora, including a highly impressive type of orchid that I don't think I've ever seen in the wild before. Actually, now that I look at the notes with Betty's map, I see that it is a Dwarf Lake Iris, which is "found nowhere else on earth except the Straits area." Reader Susie Hopkins tells me however that this is in fact a Blue Flag Iris: 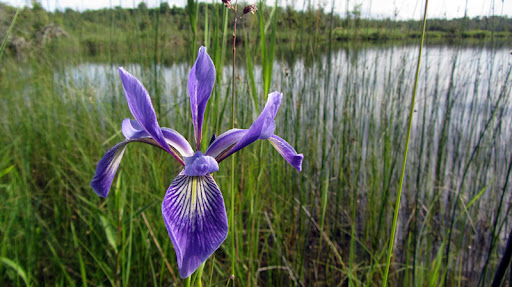 We had about enough time left to see one more thing before having to head back to the docks. We decided that Snake Island (which is only an island when lake levels are high--which they were not) would be interesting seeing as it is a good place to see wildflowers, and Bois Blanc is known to contain examples of every single endangered wildflower in Michigan, including the Pitcher's Thistle, which only grows here and is a "carnivorous insect eater." 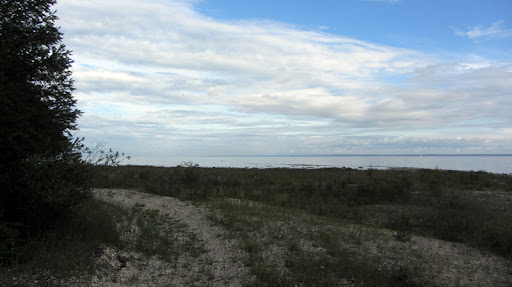 From Snake Island, here is the Poe Reef Light: 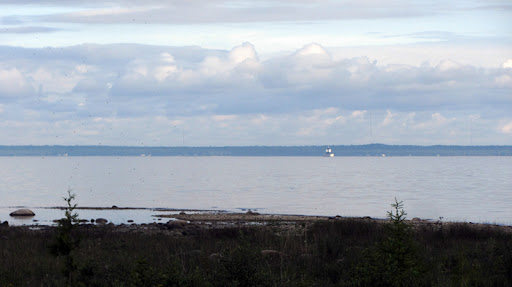 I am told that this next flower was the Indian Paintbrush: 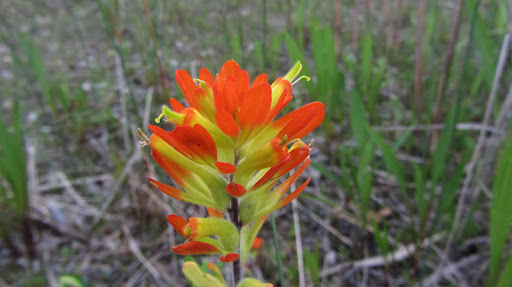 On the way back to the ferry, I spotted this dilapidated cabin that could probably be explored, but we did not have time. 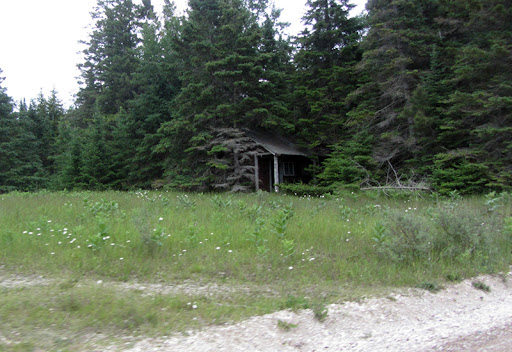 Right now it was time to head back to Cheboygan for grub, and beers around the fire. 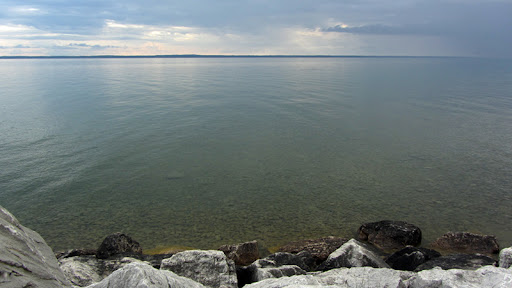 As we sat awaiting the signal to board the ferry, I could see the weather turning again. I hoped that it was not raining back on the mainland tonight. The gates dropped and we were waved aboard. Strange, there weren't any other cars in line like there usually are. In fact you must make reservations to use this ferry, because it is routinely full to capacity on every trip. But once Chisel's car was parked in the center of the deck, the crew closed the gates again and it was apparent that we were the only ones on this trip. 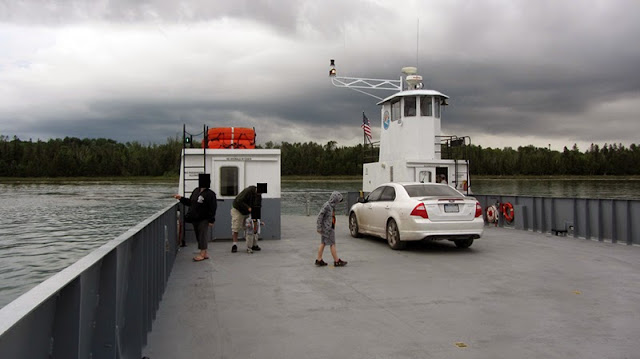 We had the whole boat to ourselves. 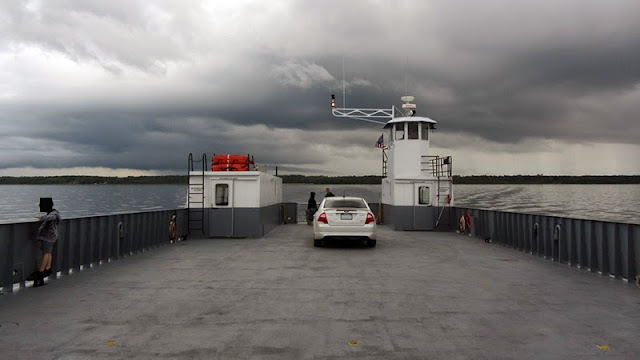 As we motored away from the island the storm clouds crowded in from the west and north, threatening to envelop us. Out to sea I could see squalls already down-pouring; we had left just in the knick of time. It seemed however that we were cruising just fast enough to stay ahead of them, and once again the crossing of the strait was abnormally calm. I stood on the very bow of the vessel and stared down into the dark glassy water as it rapidly passed beneath. 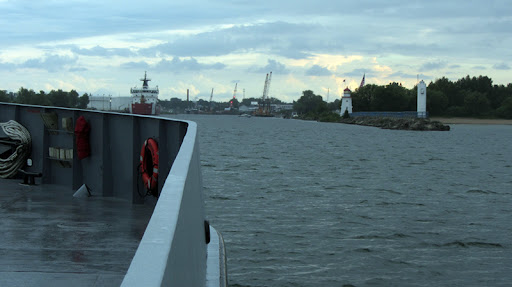 Just as we were coming back within sight of Cheboygan, it began to rain on us so we retreated inside the small passenger cabin. We came back out again once we entered the mouth of the Cheboygan River to snap some shots of the various ships docked, including the USCG Cutter Mackinac: 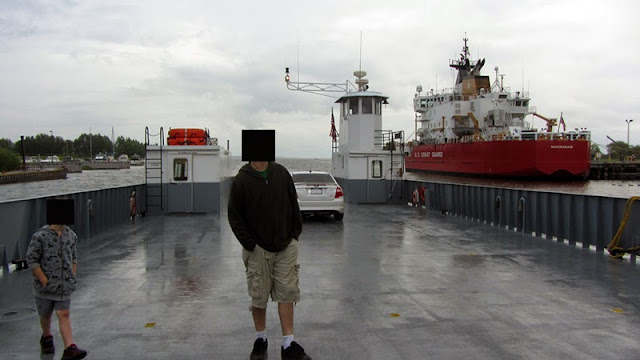 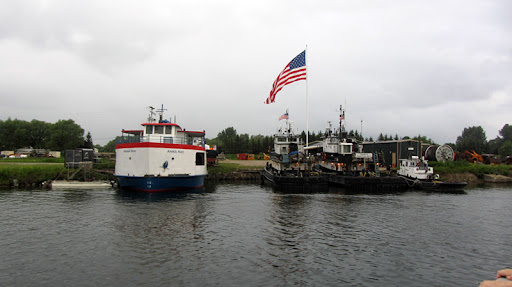 Here you can see the lit beacon of the Cheboygan River Front Range Light: 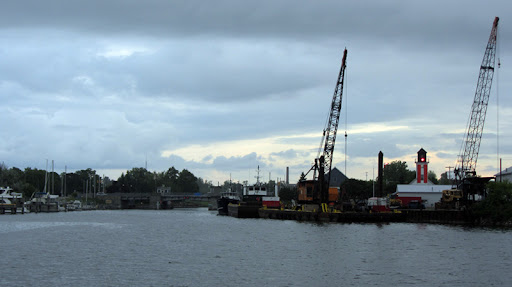 The one at the mouth of the river a couple photos ago was actually the Cheboygan Crib Light…both date to the 1880s. This is where the rain began to catch up with us again. 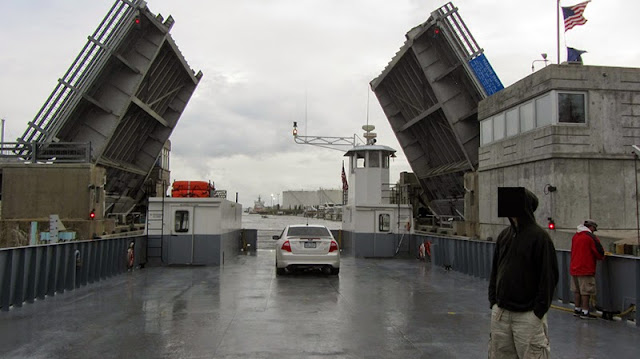 It was happily dry back at camp in Alverno however. Awww yeah....fire, food, & beerz time. 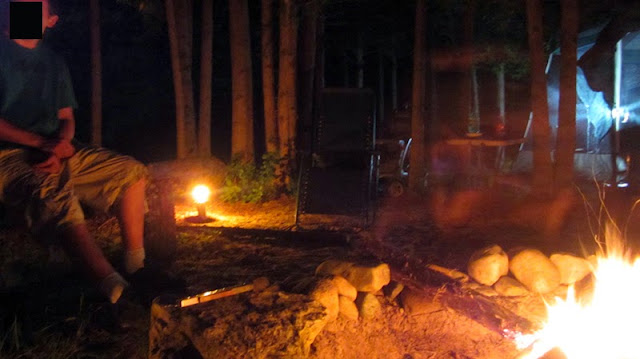