The First Nighttime Stars to Shine

Nestled deeply within industrial Hamtramck lies the quiet, overgrown Roesink Stadium (sometimes also known as Hamtramck Stadium), once the home of Detroit's Negro League baseball team, the Detroit Stars. The stadium is closed but not really abandoned; there has been a group taking care of it and working toward getting National Historic Landmark status for the site, which they achieved in 2014.

I'm not a jock by any stretch of the imagination, but nonetheless I respect that sports--prior to the modern grotesque corporatization and commodification of athletics--played a major part in the cultural histories of the teams' hometowns.

I believe at the time I visited with my friend Yaz (whose photo I used above because I just realized I don't have an exterior shot of my own), it was the only Negro League stadium still standing that was not officially being maintained, though today it is in better shape. Only five other Negro League ballparks remain in existence today: Rickwood Field in Alabama, Hinchliffe Stadium in New Jersey, Bush Stadium in Indianapolis, Engel Stadium in Chattanooga, and Cooper Stadium in Columbus.

This stadium was built in 1930 by John Roesink, a downtown clothier and promoter of amateur sports, who owned the Negro team, the Detroit Stars. According to author Richard Bak, Roesink also helped introduce pro football to Detroit. He was one of only two whites who were ever team owners in the Negro National League (NNL).

Though this field was originally configured for football, according to Richard Bak's book A Place for Summer, at first the Detroit Stars were only playing here by necessity, because a major fire had destroyed their original homefield, Mack Park (at Mack & Fairview), in July 1929. In any case, this grandstand was built and Hamtramck became their new home.

The ballpark's official website, HamtramckStadium.org, says that Roesink was also a friend of Detroit Tigers co-owner, Frank Navin, conveniently enough. A book by Chris Jensen, Baseball State by State: Major and Negro League Players, Ballparks, Museums, says that Roesink had Detroit Tigers superstar Ty Cobb throw out the first pitch at this park in 1930 (which is interesting, because if I'm not mistaken Cobb always had a reputation for being bigoted).

Hamtramck Stadium became the home field of the Detroit Stars for the 1930 and 1931 seasons, and in 1933. The Detroit Stars made it to the 1930 Negro National League Championship Series--the seventh, and deciding game of which was played on this field, against the St. Louis Stars. Unfortunately Detroit lost, and it was the closest they ever came to a championship pennant through all their seasons.

The Historic American Landscapes Survey (HALS) says that the players who graced this field "were of a caliber that placed them on the same level as their white counterparts." A total of at least 18 Hall of Famers have played Negro League baseball at Hamtramck Stadium, five of whom were on the Detroit Stars roster.

According to HamtramckStadium.org however, Hamtramck Stadium’s own resident superstar was Norman "Turkey" Stearnes, "one of the greatest home run hitters in baseball history." During his 20-year career he played for the Detroit Stars from 1923-1931, and again in 1937. Stearnes had a career hitting average of .353 and led the NNL in extra base hits during the Stars’ pennant drive in 1930. In 1931 he was the league leader in runs, hits, extra base hits, and home runs.


The HALS further distinguishes Hamtramck Stadium because it was "the site of the first night baseball game played in Detroit and possibly Michigan." The game was played on June 28, 1930 against the Kansas City Monarchs, who happened to travel with a portable lighting system that consisted of telescoping 50-foot towers attached to the backs of trucks, which were parked around the perimeter of the park. They placed more lights on top of the grandstand.

"This changed the game of baseball, allowing players and fans to enjoy games at virtually any time of the day," which I imagine was pretty important in a three-shift town like the Motor City, where one third of the population was awake all night assembling cars. It also opened up more playing time--and thus more games--to the financially distraught teams of the period, the HALS notes.

I find it very surprising that the debut of this technological advancement happened on a Negro League field a full 18 years before even Tiger Stadium itself had lights installed. According to HALS, it would be another five years before the first-ever night game in Major League Baseball was played, in Cincinnati.

This stadium was acquired by the City of Hamtramck in 1940 and renovated in 1941 by the Wayne County Road Commission, using WPA funds, HamtramckStadium.org says. "Its current configuration dates to the 1970s. The grandstand has not been used since the 1990s, but remains in good shape while awaiting renovation." 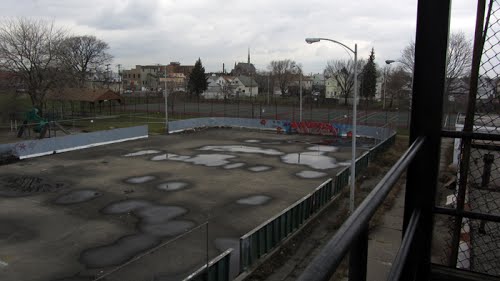 While we were shooting our photos, Yaz and I were forced to duck momentarily when we heard the unmistakeable sound of a different kind of shooting, going on almost immediately behind the stands from us. After waiting to hear if there were any sounds of reloading, I peeped my head up over the edge to see if anyone was hurt, but apparently this was apparently just the regular "midday-stress-relief" kind of shooting randomly into the air out one's front door, not the "actually-trying-to-kill-someone" kind of shooting, so we went back to what we were doing.

From the upper seats, the iconic St. Florian's church is visible towering over Hamtramck in an almost feudal village scene:

In the other direction, the smokestacks of GM's sprawling Poletown Assembly Plant are seen, where the old Dodge Main Plant would have once loomed, back in the old days:

Yaz and I eventually wandered a block away, over to the art-deco Keyworth Stadium, which is used for football by the neighboring school: 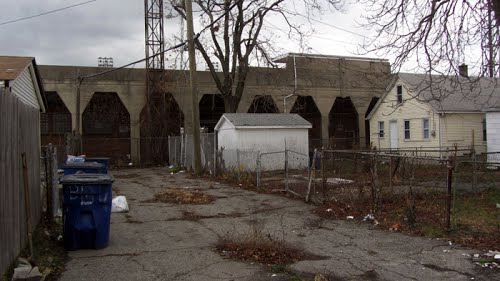 Richard Bak's book mistakenly equates Keyworth Stadium as one and the same with Hamtramck Stadium, but this is impossible since as Detroit1701.org indicates, Keyworth Stadium was built in 1936 as a WPA project, a fact confirmed by a plaque on the side of it. Though the name Fred Pabst appears on the plaque, I doubt the famous brewer had any involvement, as he was dead by 1901.

At any rate Keyworth Stadium is historic in its own right, since its dedication was presided over by FDR himself, and was the site of a campaign speech in 1960 by JFK.

Though the fiery demise of Mack Park was the precipitating factor, John Roesink reportedly built the Detroit Stars' new home in this location due to its proximity to the Dodge Main plant, hoping to attract both white visitors, and company / workplace teams to his park, Bak writes. In those days Negro games were not only attended by blacks; it was not unusual for many whites to also fill up the stands, especially when the Detroit Tigers were out of town. Unfortunately the new location was less accessible for black spectators, wrote Lawrence Hogan in his book Shades of Glory.

Dodge Main was not the only plant nearby. Across the tracks can be seen one of the old Briggs Body Co. plants...

...Which is interesting because the founder of Briggs Body, Walter O. Briggs, was also famously the sole owner of the Detroit Tigers for many decades, upon the death of Frank Navin. I have to wonder if there is a connection here, though the parcel the ballpark sits on used to be a lumber yard. 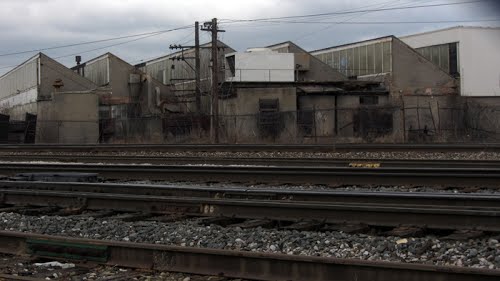 Anyway, John Roesink was a bit of a bigot as it turns out, and Hogan says he "consistantly alienated fans with his references to 'shines' and 'coons,'" and this new stadium never became a profitable location for black baseball. Not to mention that many blacks still blamed Roesink for the Mack Park fire (saying he carelessly stored gas cans for drying the field underneath the grandstand), and boycotted his games. If it had not been for the quick action of the players that day ripping down the chicken-wire enclosure to free them from the burning structure, the toll could have been much worse than a few burns and broken bones.

John Roesink gave up and sold the team (to a black man) in 1930, though Negro league baseball was already on its way out, with the onset of the Great Depression and World War II. I have also read that Roesink sold the team because his clothing business was hurt by the Depression.