Gratiot County sits in the middle of Michigan's "Mitten," and there was one of those old water slide parks that stood on a hill overlooking the highway that I took to get to Mount Pleasant when I lived there. When it closed down and slowly started getting overgrown, I took notice more and more on my trips back and forth from Detroit, and thought it might make for a neat place to take some photos, but I never got around to it until recently. 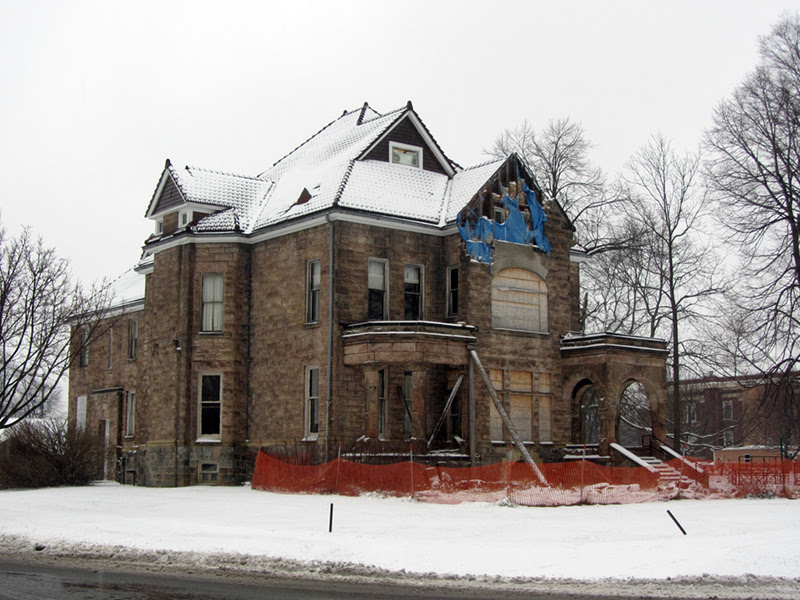 Along the way I stopped to take a look at the long-vacant Ammi Wright House in attractive downtown Alma, but I didn't find any means of ingress that didn't involve a felonious act, so we kept going to the slide park. Getting to it involved a long snowy walk through a bumpy field, and when we started getting close I could see that there was a somewhat broken Bobcat parked halfway in a structure that it really didn't fit inside of: 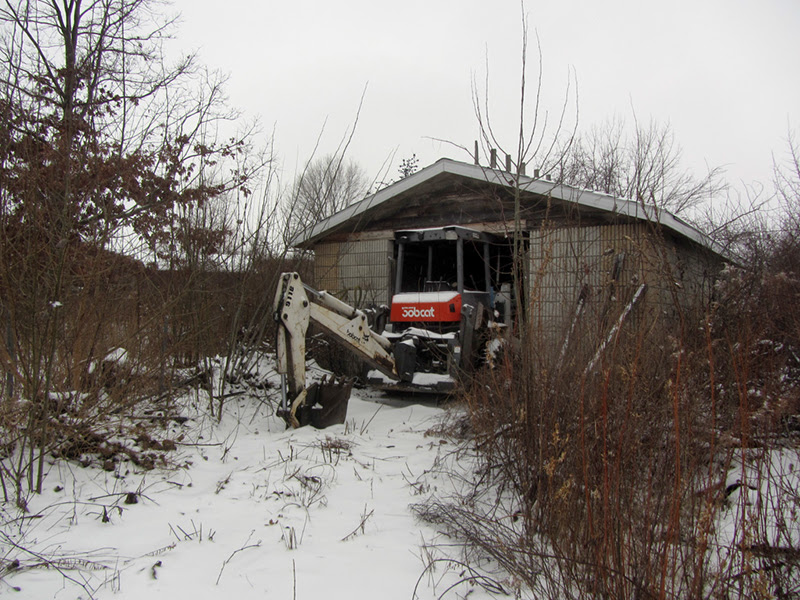 Here was what looked to be a wading pool perhaps: 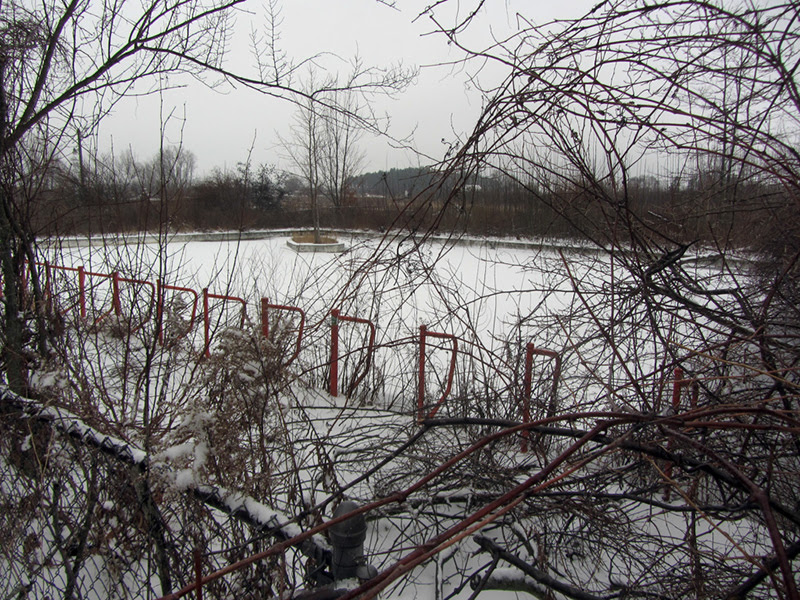 Steps led up to the large central building. 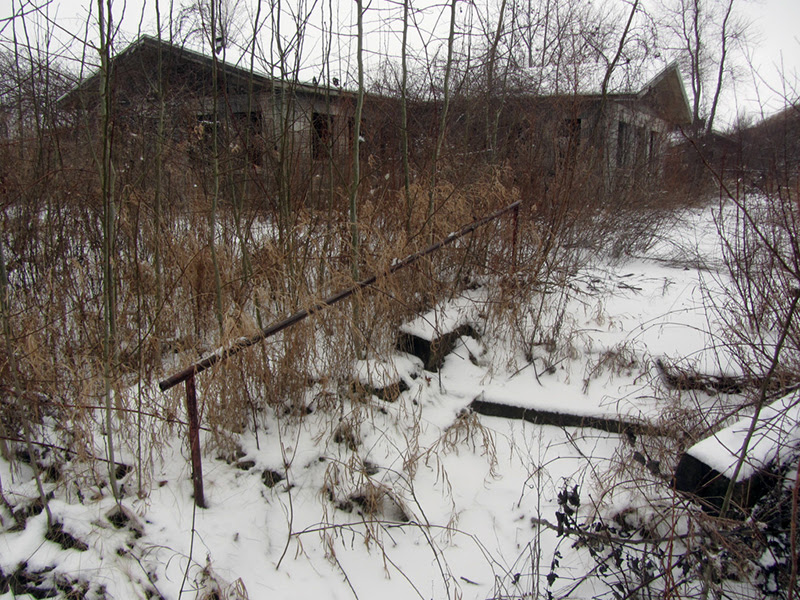 I would guess this place to have been constructed in the 1980s, but I wasn't really been able to dig up much about it online. According to a question on Yahoo Answers in 2007, there is a rumor that "15 years ago" a young girl hit her head on a wall at this slide park and was killed, allegedly prompting the owner to pack up that night and disappear. That post, and other search engine hits seem to name the park as "Alice's Wonderland." 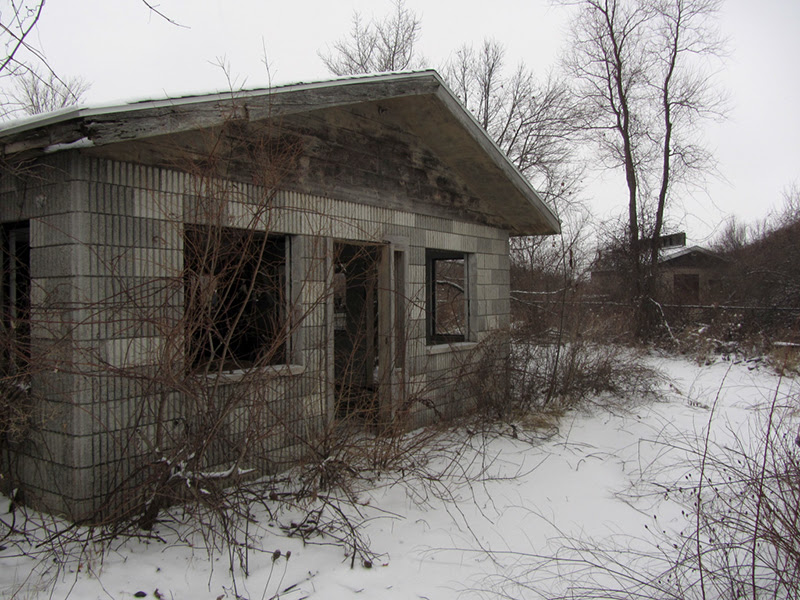 Taking a peek inside, it looked like there was once a cafeteria or snack bar in here. 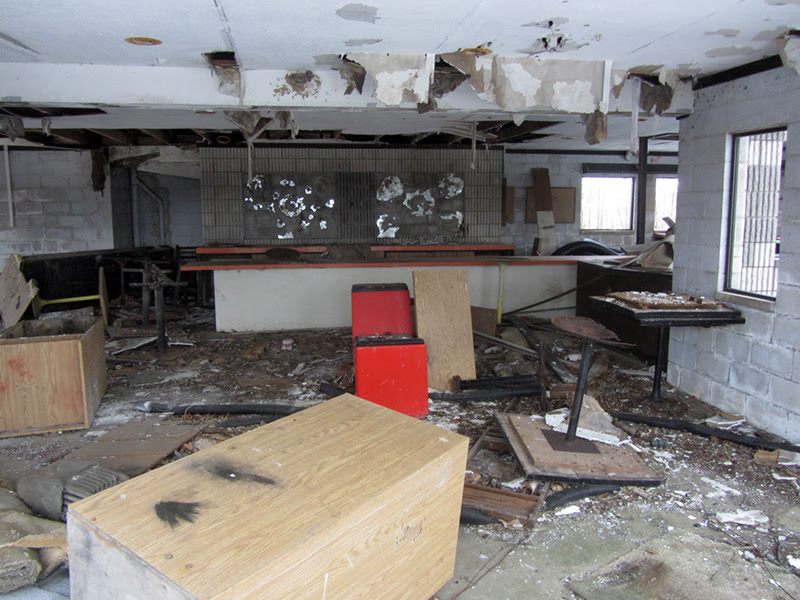 By the level of vandalism it looks like it's been abandoned for a few years. 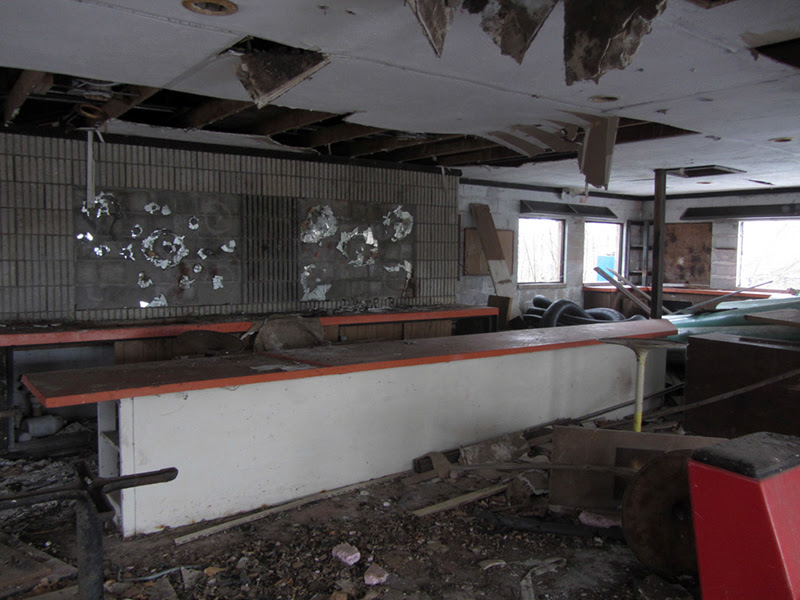 This stack of pipes however might indicate that there was once an effort to remodel and reopen this attraction: 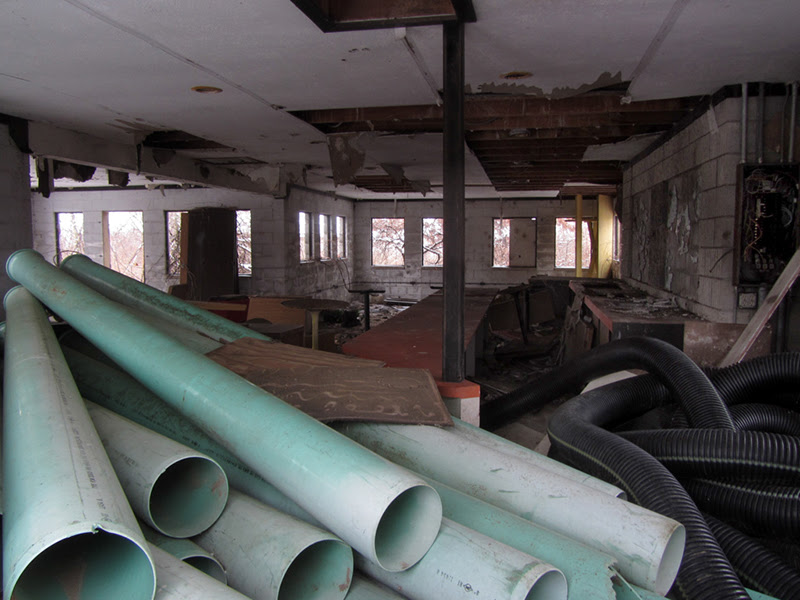 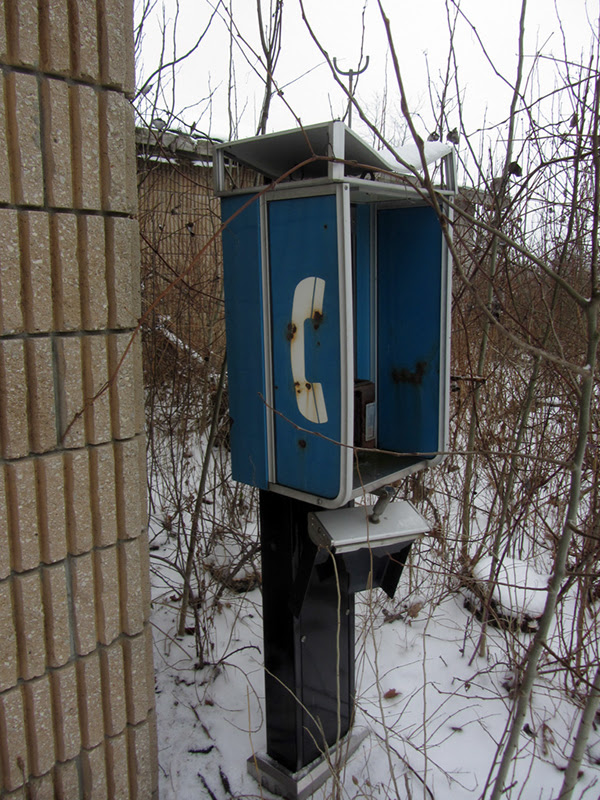 Just beyond the main building was a smaller one, and the beginning of the slope that led up to the top of the tall hill that overlooks the highway. 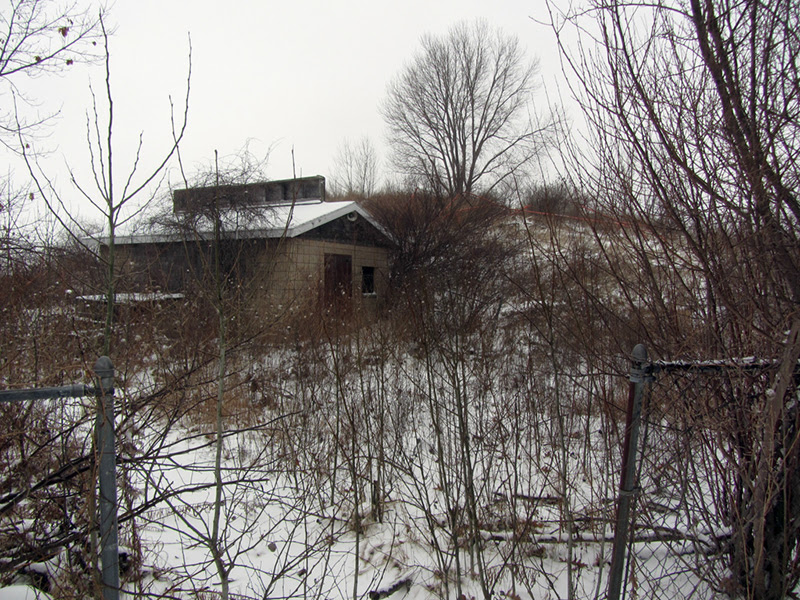 It appeared to house the plumbing, filters, or pumps for the water slide system: 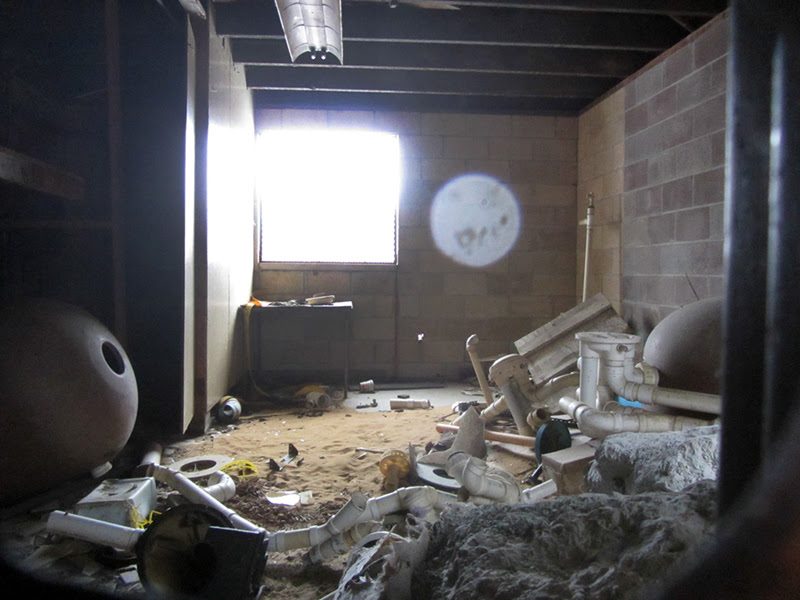 Old hand-railings mark former walkways, where barefooted or sandal-clad kids undoubtedly once scampered on their way to the many slides. 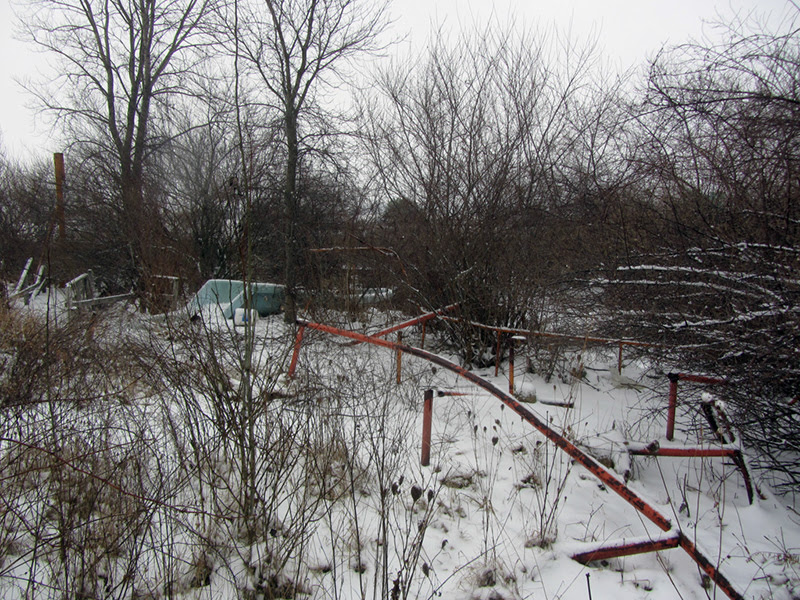 I think this shorter, gentler one was meant for the kiddies: 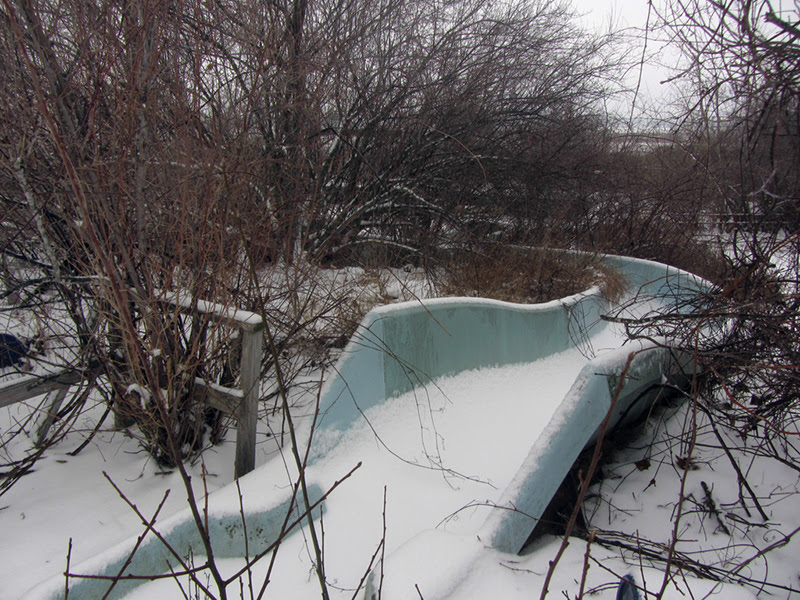 I should have brought a saucer sled! 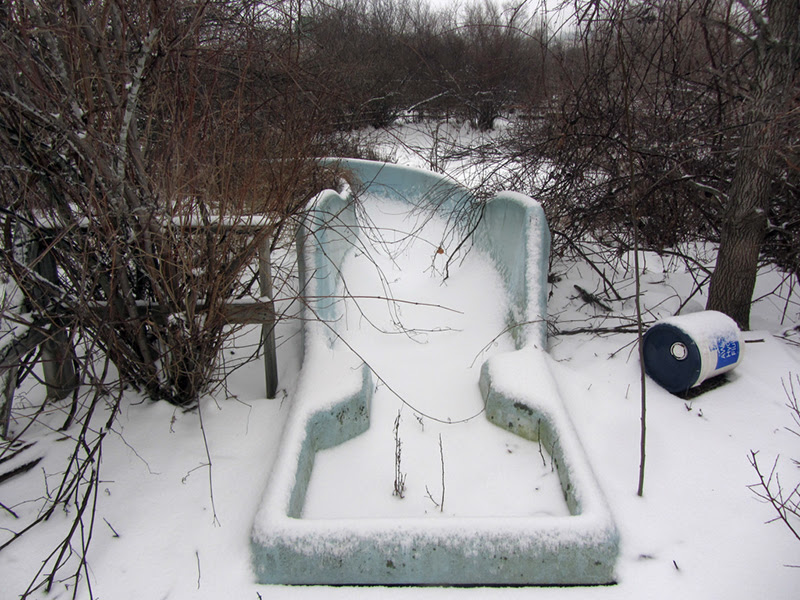 The bulk of the hill still lay above us: 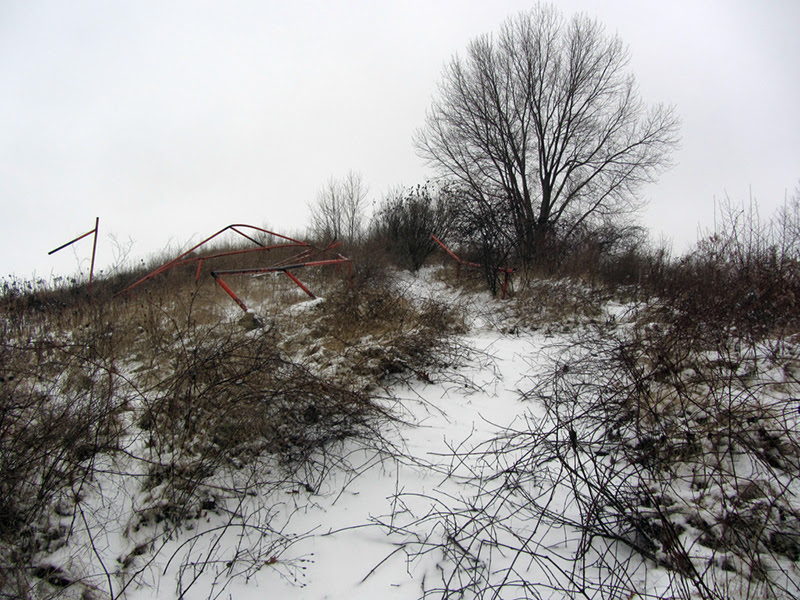 The highway began to come into view: 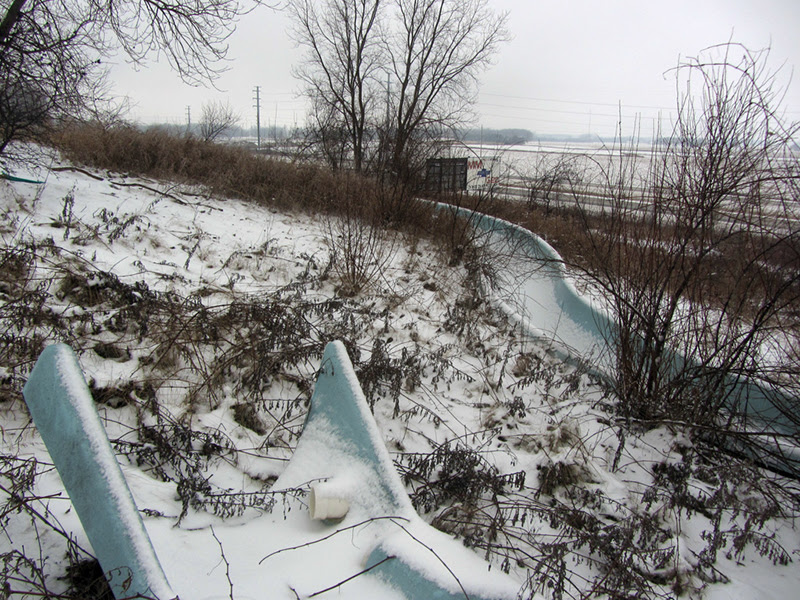 The view out over flat Gratiot County farmland was mostly blotted by the snow that was beginning to fall again. I have a feeling that on a clear summer day the view up here is excellent. 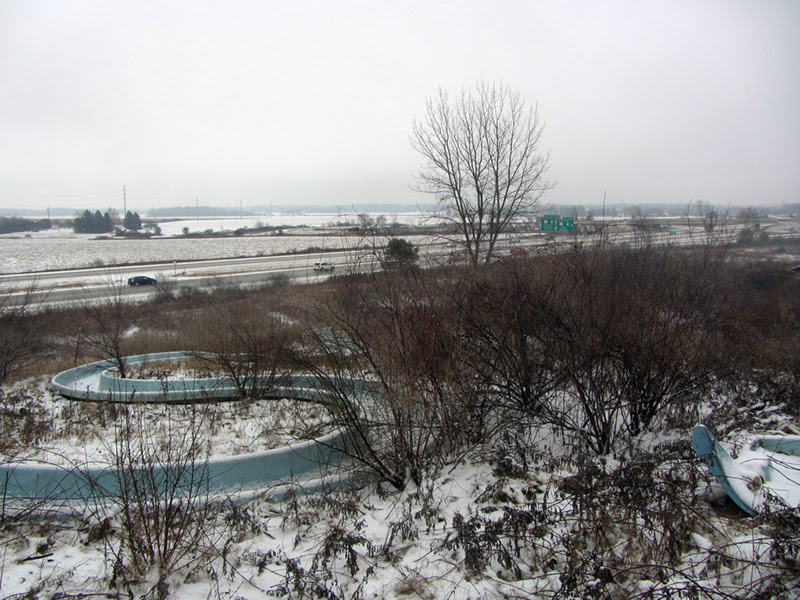 At the pinnacle of the hill was this overgrown tree, and the start of the tallest slide: 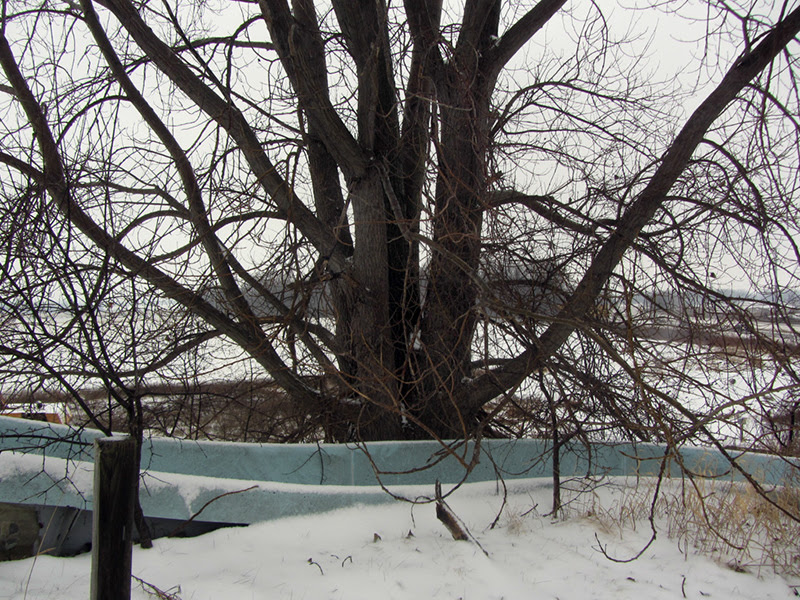 Gratiot County was set off in 1831 and organized in 1855, named after Captain Charles Gratiot, who supervised the construction of Fort Gratiot at modern day Port Huron in 1814. 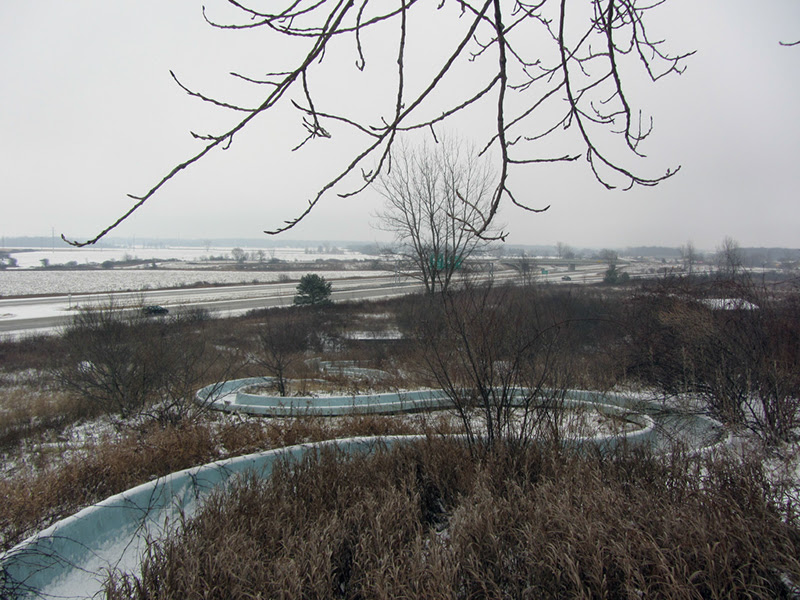 David M. Brown writes in his Michigan County Atlas that even though humans have existed in Michigan for 10,000 years the Gratiot County area resisted encroachment, with the earliest evidence of habitation only dating back 2,000 years, thanks to the fact that it remained so densely forested and swampy. 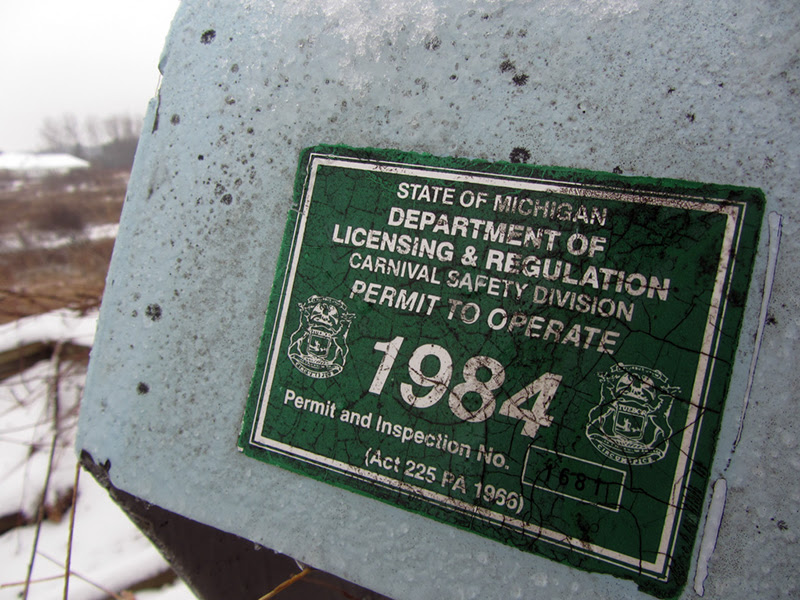 The first white settlers did not make their way this far into Michigan's interior until 1846, and author Gene Scott says that Gratiot County was once nicknamed "starving Gratiot" because the land could be bought for 50 cents an acre, but it had to be developed within a year, under pain of foreclosure. 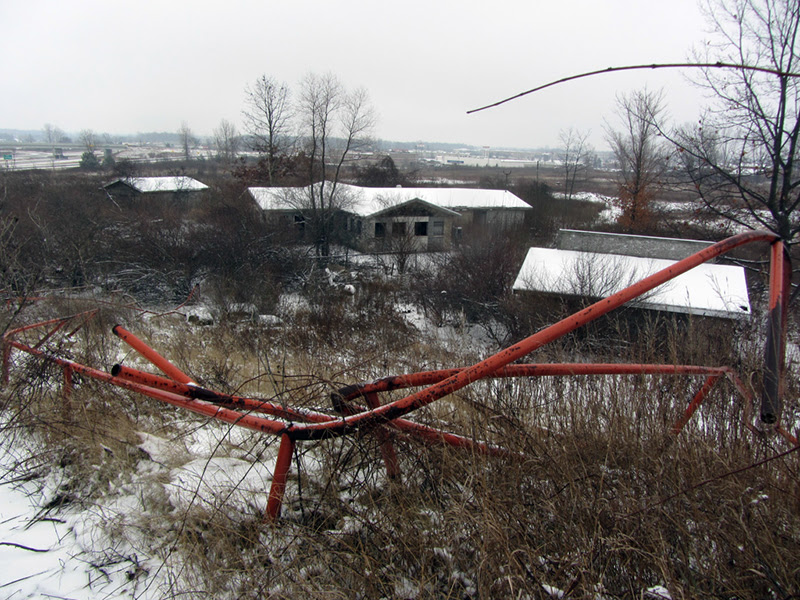 A lack of viable transportation routes into the county left a lot of buyers scrambling to make ends meet once they arrived and discovered the reality of the situation. Most ended up leaving, and Brown said that the first successful harvest did not occur until 1859. It was a couple more decades by the time the land was cleared and drained so that large-scale farming could begin, and "the county that could not feed itself" finally started to thrive, and dream of building water slide parks. Gratiot County was also where some of the Scotford Relics came from in the 1890s. 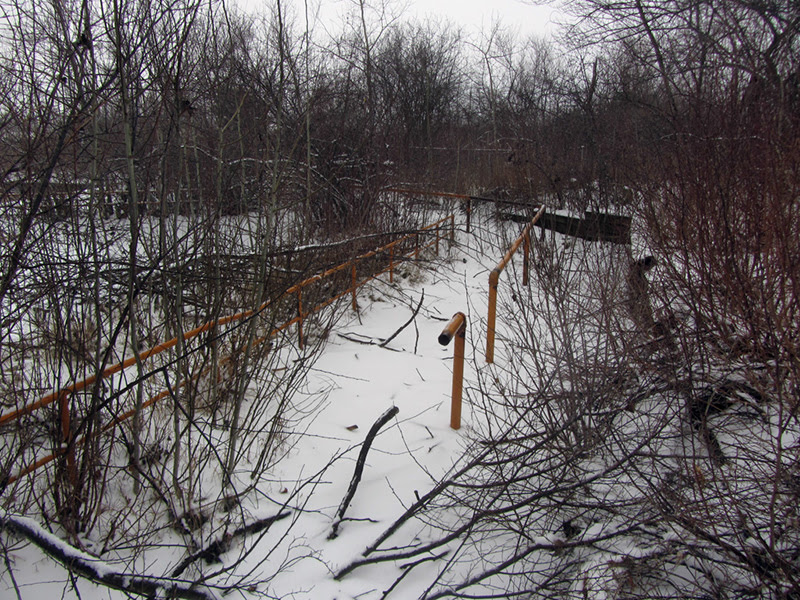 Another interesting place in southern Gratiot County that I've always wanted to check out was the semi-ghost town of Pompeii, which we visited after leaving the slide park. There wasn't much there except for four corners, but something in the damp gray of the misty winter day lent it a very moody atmosphere. 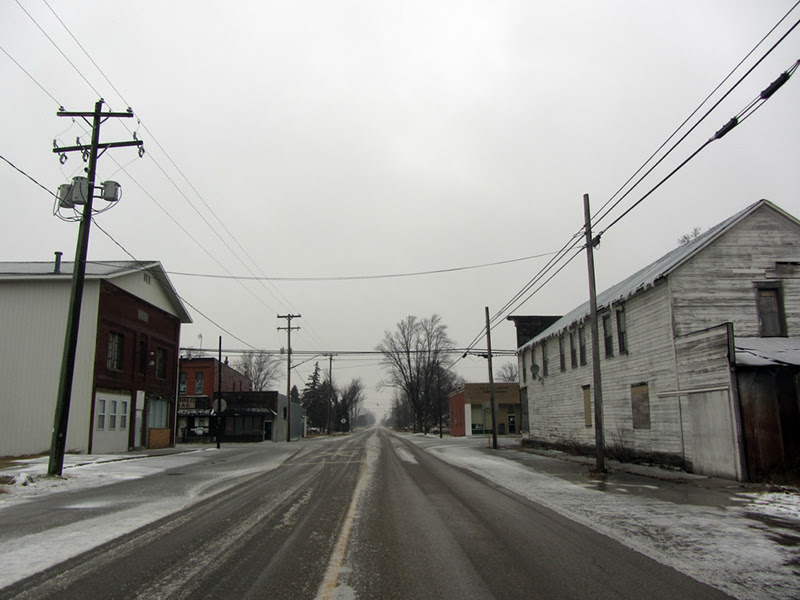 The book Michigan Shadow Towns, A Study of Vanishing and Vibrant Villages by Gene Scott says that Pompei (with one "i") was named after the famous Italian city that was buried by the eruption Mt. Vesuvius in the year 79AD, but it was founded in 1854 when a Joseph B. Smith built a "halfway house" here for travelers on the old state road to Ithaca.

A hotel, tavern, and some stores were built later, and by 1860 Pompei was a real village with a bid for a railroad stop. The Toledo, Saginaw & Muskegon Railroad that was mentioned in my post about Butternut Elevator was supposed to also pass through Pompei, but when the dogged villagers learned that the tracks were to actually be laid a mile and a half to the south, they moved their town down there in 1887. 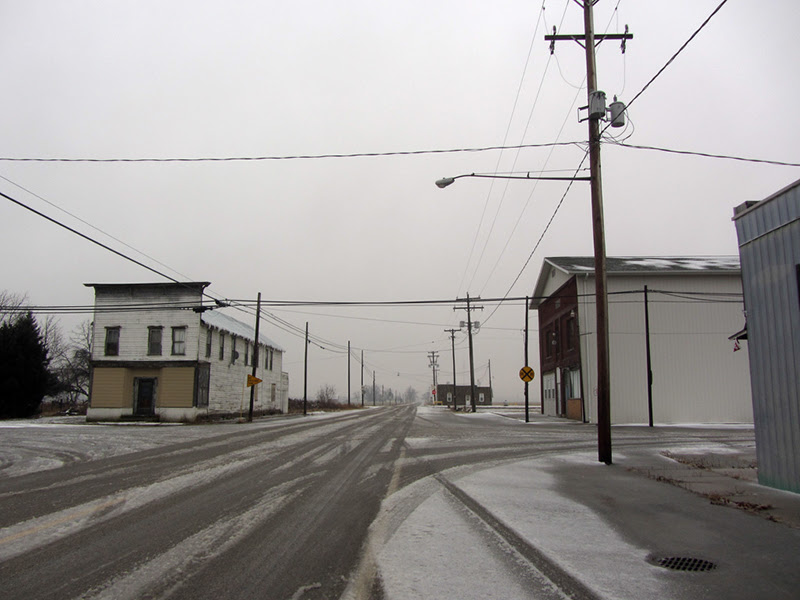 Pompei then prospered with the construction of many new homes and businesses, including a grain elevator and sawmill. In 1897 they changed the name from Pompei to Pompeii, so as to better match its doomed Italian counterpart, though locals apparently pronounced it "Pom-pee-eye," and still do even to this day. Pompeii continued growing and in 1910 sported a state bank, 16-bed hospital, and 300 residents. 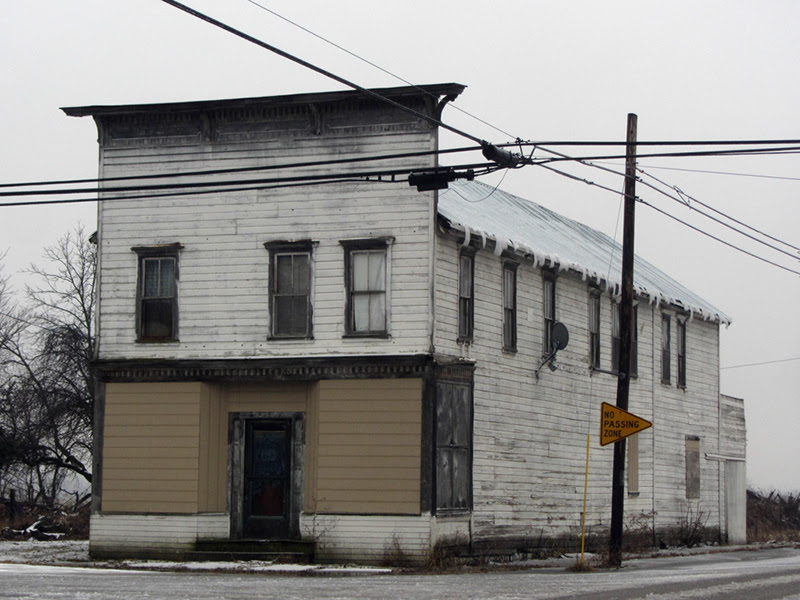 Pompeii started to decline in 1920. The hotel closed in 1930, the railroad stopped running in the 1950s, the old state road was moved further out of town, and the school closed by 1960. When Gene Scott was writing in 2005, there were about 70 families still living in Pompeii, and its post office--established in 1856--still operates. Gratiot County itself continues to thrive for the most part as well.